The law is undermining the fight against terror 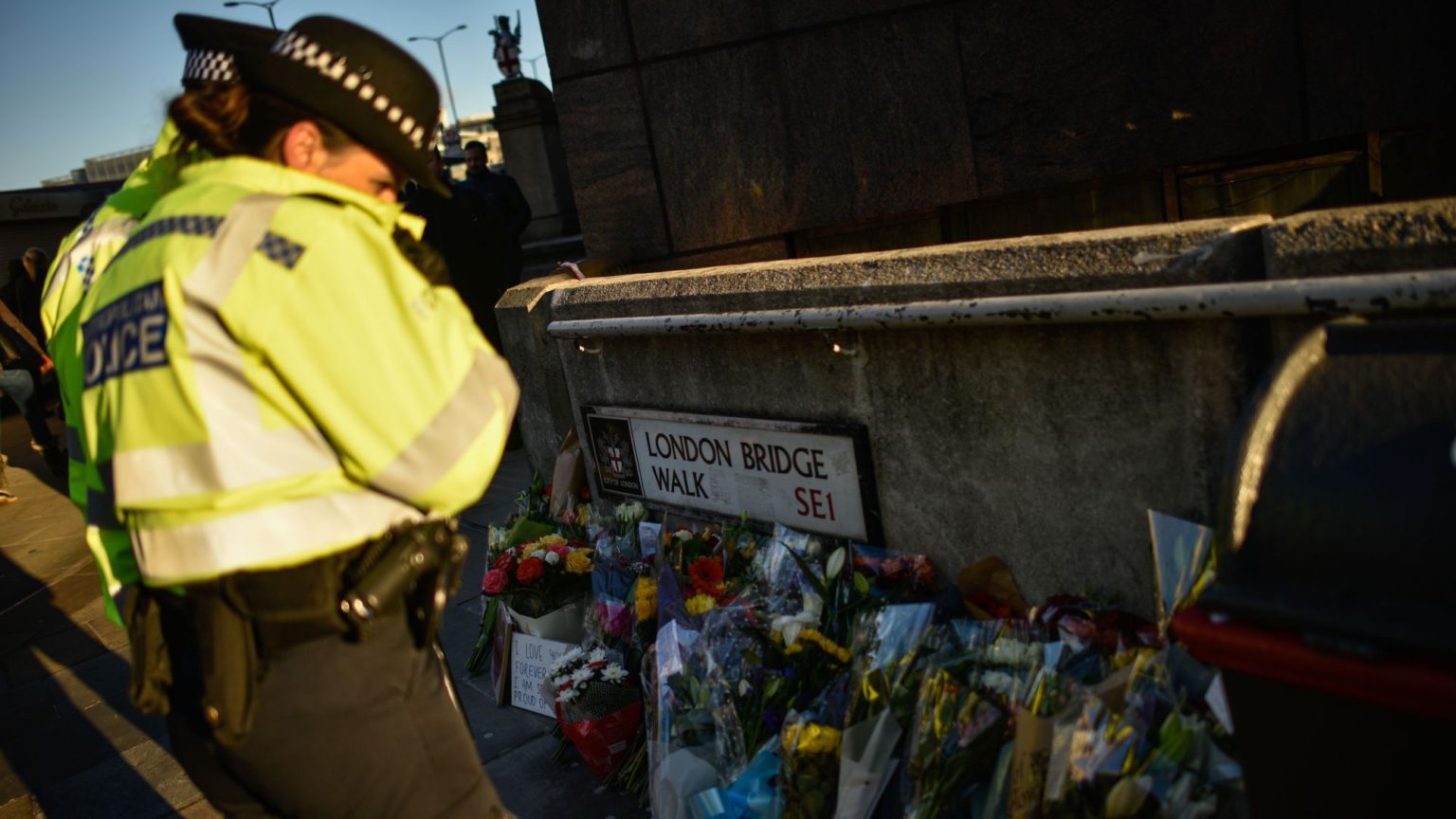 Parliament approved emergency legislation designed to end the release of terrorists halfway through their sentence yesterday. The measures are a response to the attacks in London Bridge last November and in Streatham, south-west London, earlier this month. These attacks were committed by convicted terrorists who were let out after serving only half of their prison terms.

Terrorists differ from ordinary criminals in having a political motivation. As the Terrorism Act 2000 puts it: ‘Terrorism means the use or threat of action… made for the purpose of advancing a political cause.’ The political motivation was evident last week when a supporter of the Islamic State pleaded guilty to plotting to blow herself up in a bomb attack on St Paul’s Cathedral. She told undercover police officers that she ‘really would love to destroy that place and the kaffir there’. Like Usman Khan (London Bridge) and Sudesh Amman (Streatham) all three terrorists were intent on killing people who did not subscribe to their warped political perspective.

The political nature of terrorism distinguishes it from ordinary crime. Terrorists seek to inflict much more harm on society than ordinary criminals who – generally – do not desire wantonly to kill pedestrians and churchgoers. Terrorists seek to challenge with violence the very society we live in. The barriers that are now regularly being installed outside public buildings and along public walkways are a constant reminder of the harm caused by today’s terrorists.

Ordinary criminals are entitled to established legal protections because their actions do not threaten the fabric of society. Their harm can be dealt with by the normal legal process. These norms are appropriate for the alleged shoplifter, rapist, bank robber or murderer because they reflect an appropriate balance between society’s interests and the individual’s rights.

But because terrorists pose a much greater threat to society, the balance between their rights and society’s interests needs to be weighted in favour of society. This does not mean terrorists should be dealt with outside the law, but it does mean that the law needs to be framed to protect the collective interests that politically motivated terrorists threaten. Terrorists cannot expect the same legal protections that are afforded to ordinary criminals.

The practical reality of counter-terrorism highlights why this is so. Arresting terrorists is not always possible because, as the recent attacks in London show, they may be fixated on killing. Trying them is not always possible because, where evidence is based on secret intelligence, the authorities may not want to disclose their sources. Convicting them may be hard, especially if their activities have been overseas or with conspirators acting abroad, sometimes in lawless countries. Sentencing them is not straightforward because, when apprehended at an early stage, there may be a gulf between what the terrorists intended to do and what they actually did. And, as the recent cases in London have shown, imprisonment may have hardened rather than reformed the prisoner.

As a matter of principle, the state needs to be able to deploy the law to defeat terrorism. But sadly, in recent decades, the law’s view of terrorists has hindered this task. The problem stems from human-rights law, which views rights as universal, and which is therefore unable to treat terrorists differently from ordinary criminals. As recent cases have shown, when human-rights laws grant terrorists rights they should not have, the state’s ability to fight terrorism is gravely hampered.

The problem started in 1996, when the European Court of Human Rights (ECHR) ruled that Karamjit Chahal, an Indian citizen and failed asylum-seeker, could not be removed from the UK, even though two home secretaries (Douglas Hurd and Kenneth Clarke) decided that he ought to be deported. Their political judgment – made on the basis that Chahal was directing support from London for Sikh terrorists in the Punjab – was trumped by the judges in Strasbourg.

The ECHR ruled that ‘the activities of the individual in question, however undesirable or dangerous, cannot be a material consideration’ when confronted with substantial grounds for believing that deportation would breach Chahal’s human right to avoid ill-treatment by the Indian authorities. With this judgment, the law erased the public need for safety, which could not be a material consideration, and threw its weight behind the terrorists’ individual rights.

The Chahal judgment has prevented the government from deporting a great many suspected terrorists who are not UK citizens and who have been able to seek a safe haven in the UK. It prompted further battles between the government and the courts after the attacks of 9/11. Because the Labour government was unable to deport suspected foreign terrorists, it legislated to empower the home secretary to put them under house arrest instead. Although this was an attempt to navigate around the problem created by human-rights laws, this measure was itself ruled unlawful on human-rights grounds by the House of Lords in 2004. This became known as the Belmarsh judgement.

In response to the Belmarsh judgment, the government introduced control orders under the Prevention of Terrorism Act 2005. With these orders, the home secretary could restrict the movement and activities of suspected terrorists, without subjecting them to house arrest.

In principle, the courts sanctioned these lesser curtailments of liberty but only because the courts were able to scrutinise the terms of the restrictions. The courts made the control-order scheme practically unworkable. In one case the home secretary required an Ethiopian national (AP) to move out of London, where he was suspected of meeting Islamist extremists, and to live in a Midlands town 150 miles away. The Supreme Court quashed this condition after noting the ‘incontestable hardship’ to AP arising from the fact that his mother found it difficult to make the hour and 45-minute train journey to visit him. This ruling epitomised the extent to which the law had been bent in favour of the individual rights of suspected terrorists.

Court battles like the one that concluded in favour of AP caused the government to replace control orders in 2011 with even weaker restrictions in the form of TPIMs (Terrorism Prevention and Investigation Measures).

Despite being weak and bureaucratic, TPIMs are still susceptible to legal challenge. One case concerned DD, a Somalian who was suspected of supporting the terrorist organisation Al-Shabaab. The court quashed the TPIM requirement that he wear a tag because it feared for his mental health after he developed the ‘psychotic and unusual’ belief that ‘the tag was there to punish him, that it contained a camera and a bomb and that voices and noises emanated from it’.

Rulings like the one in favour of DD have caused the government to conclude that issuing TPIMs gives them too much grief for too little public gain, hence they are rarely used. The parliamentary joint committee on human rights described TPIMs as ‘withering on the vine as a counter-terrorism tool of practical utility’. Giving evidence to the House of Commons, the Home Office said there were just seven TPIMs in force as of November 2016.

Having undermined the state’s ability to deport and control suspected terrorists, the law is now set to challenge the government over when terrorists should be released early from prison.

Nobody can be sure how this latest conflict will end, but the fact that convicted terrorists will have the right to challenge government legislation shows the extent to which law has given rights to terrorists that they should not have. Although it is generally true that laws should be made in parliament and that the courts should apply them, it is a particular affront to democracy that convicted terrorists can challenge the will of parliament.

In 2011, then prime minister David Cameron called for a ‘muscular liberalism’ to tackle Islamist terrorism. He noted the terrorists’ political motivations that made them ‘prepared to blow themselves up and kill their fellow citizens’. Cameron identified the problem as ‘an ideology, Islamist extremism’ which he described as the willingness of people to ‘back terrorism to promote their ultimate goal: an entire Islamist realm, governed by an interpretation of Sharia.’ Cameron claimed that Western society had been ‘too cautious’ in its response to terrorism. And, in a particularly astute observation, he noted that the West had been ‘even fearful’ to stand up to Islamists. The main thrust of his speech was his call for ‘a lot less of the passive tolerance of recent years and a much more active, muscular liberalism’.

Nine years later, we can see that Cameron’s hoped for muscular liberalism has become the fearful liberalism he warned against. The UK’s political class view terrorists as ordinary criminals who it empowers to use the sword of human rights to defeat the shield of public safety. The law should be used to fight terrorism, but in Britain, it is now used to emasculate counter-terrorism.

His essay on ‘The Rise and Fall of the Rule of Law’ is published in the book From Self to Selfie: A Critique of Contemporary Forms of Alienation, paperback £16.09.