Opposition to lockdown is on the march

Saturday's Unite for Freedom rally showed that more and more people want their freedoms back. 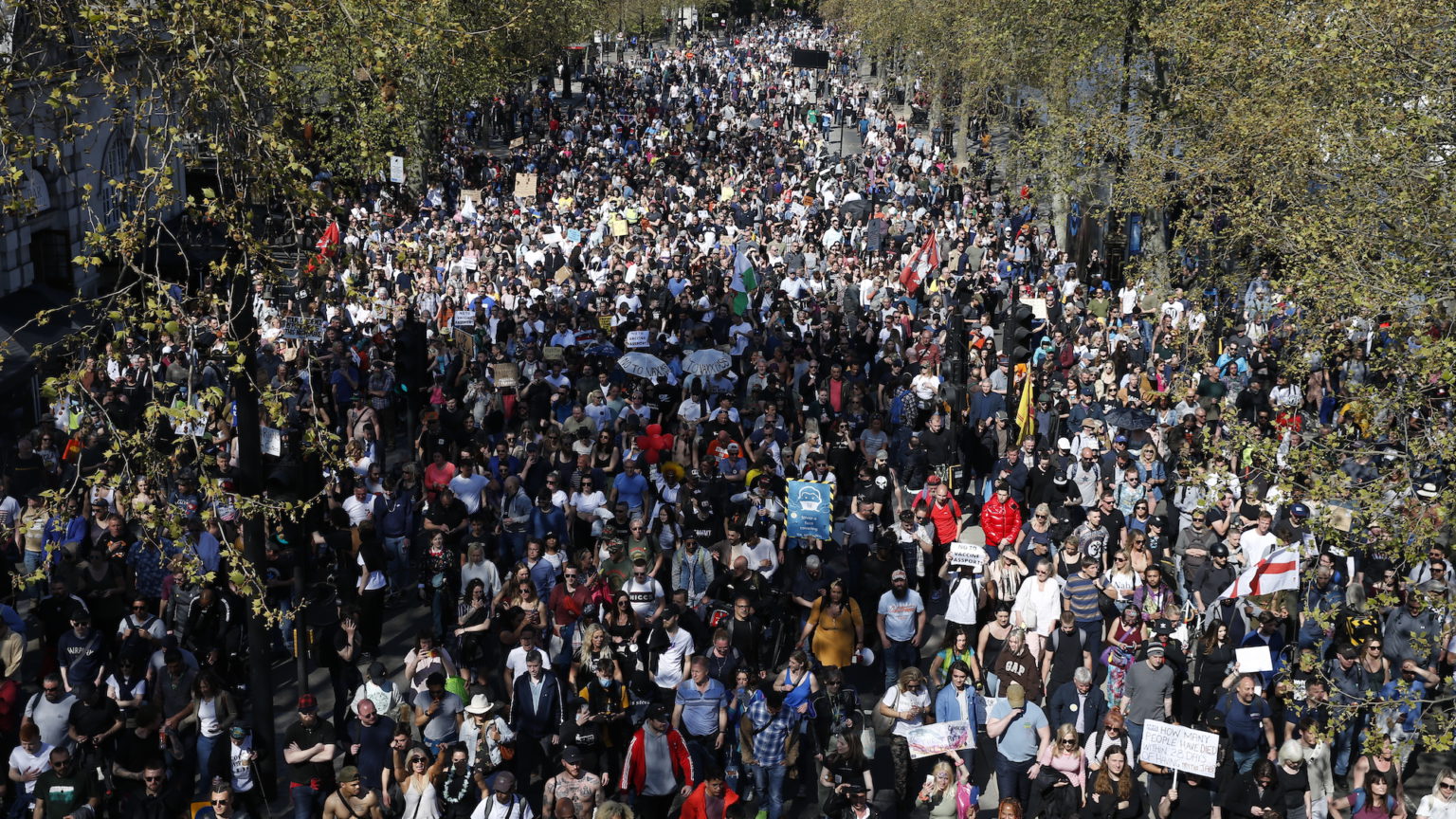 On Saturday, several thousand marched in London against vaccine passports and for an end to the lockdown. Protesters came from all over the country to support the Unite for Freedom march, organised by a coalition of Stand-Up X, Piers Corbyn’s No New Normal, the Stand in the Park groups and the small business campaign, the Great Reopening.

There have been large demonstrations against the lockdown before, especially last summer. But none really since November, when home secretary Priti Patel banned demonstrations as part of the second national lockdown. On 5 November last year, for instance, police battered a planned protest off the streets.

But that has begun to change. On 20 March anti-lockdowners did succeed in gathering in sufficient numbers to press ahead with a march in the face of police opposition. That success, coupled with the shift in the public mood towards reopening society, has given the anti-lockdown movement much greater confidence.

As demonstrations go, Unite for Freedom was surprising. First, because it draws on such a wide demographic. Local anti-lockdown groups in towns and cities around the country have recruited protesters who are not engaged by mainstream politics. This meant the march was noticeably more working class and more diverse than other, student-dominated protests, with a lot of families taking part.

Noticeable by their absence were the left-wing groups who usually gravitate towards street protests. This is partly because the metropolitan left has convinced itself that anti-lockdown protesters, like the gilets jaunes in France and pro-Brexit protesters in the UK, are right-wing conspiracy theorists, probably affiliated to QAnon, if not outright fascists.

That is all the more surprising given that many of the marchers I met on Saturday are left-wingers – or were. There was a hippyish feel to the march, and a lot of marijuana smoked and Bob Marley sung. As Nazis go, a surprising number were black or Asian. Some carried placards from the left-supported Kill the Bill protests, which were staged in opposition to the draconian Police and Crime Bill earlier this year. But many of the placards were homemade. I knew some of the protesters from the Brexit Party rallies in 2019, but others I met were opposed to Brexit, just as many Brexiteers are aghast at the anti-lockdown protests.

‘Freedom!’ is the protesters’ favourite chant. They are angry about vaccine passports and do not want to see regulations become part of a ‘new normal’. The left’s fear that this movement is rife with conspiracy theories has become a self-fulfilling prophecy. People are trying to understand how it is that their freedoms have been so quickly taken away from them, and in explaining it back to themselves point to ‘Big Pharma’ or look for Bill Gates’ hand behind the scenes. Lots of the protesters are anti-vaccine, but many who I talked to had already had the vaccine and could not understand why we were not opening up already.

While this rambunctious protest weaved its way down Oxford Street, it drew an increasingly waspish reaction from those who are instinctively hostile to ending the lockdown. Broadcaster Sue Perkins thought it was sickening that people were marching in the UK while people were dying in India. Mike Wendling and Marianna Spring, reporting for the BBC, also contrasted the anti-lockdown protests in London with the rising death rate in India. ‘Can confirm today at the #londonprotest me and @mariannaspring did not see any flags representing India’, tweeted Wendling.

Others alighted on a couple of protesters who had pinned yellow stars to their chests, likening proposed vaccine passports to Nazi Germany’s anti-Jewish laws. ‘Take. That. Off’, said comedian and writer David Baddiel. It was a crass and histrionic comparison, no doubt. But it was hardly indicative of the march overall.

The Metropolitan Police also attempted to portray the march in a negative light. Having been unable to prevent the march from going ahead, they organised a small provocation at the end, sending a squad of around 20 officers wading into a crowd of several hundred post-march revellers in Hyde Park. Cue headlines about protester violence and injured officers. As assorted mobile footage shows, the partying crowd was unwilling to be pushed around, but many were trying to avoid getting drawn into a fight with the police.

What seemed clear was that a lot of people were clutching at reasons to be against the march. Which is odd. Surely everyone wants to see the restrictions on our lives lifted at some point or other, don’t they?

The left’s stand-offishness towards the anti-lockdown protests is even harder to understand. Last month, the Socialist Campaign Group of MPs, including Labour left-wingers Rebecca Long-Bailey, Dawn Butler and John McDonnell, broke with the government to vote against the renewal of the emergency Covid restrictions. Earlier this month the left organised its own Kill the Bill demonstrations against the Police and Crime Bill. And yet they still would not take part in the largest demonstration yet against precisely this bill.

The anti-lockdown protesters are – as all polls make clear – out of step with the majority of the country. But the liveliness of this movement shows that a significant minority are pushing to defend their freedom against government incursions. It seems that like many other popular protest movements of recent times, the anti-lockdown campaign is outside the political mainstream, be it left or right.