Police are using excessive force against anti-lockdown protesters and even journalists. 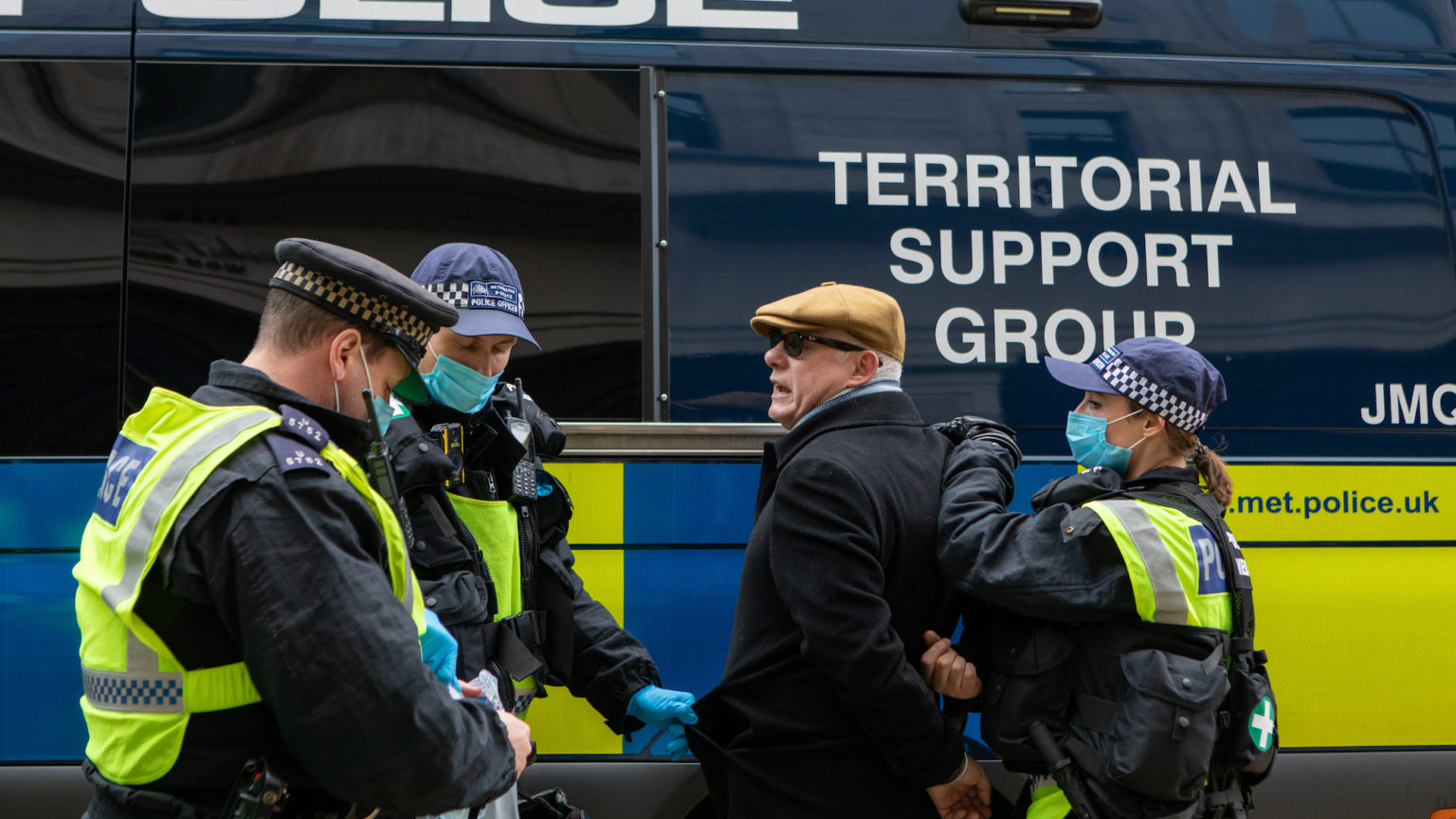 ‘Go home now or you’ll be arrested!’, an aggressive policeman shouted in my face.

I was at the anti-lockdown protest in London to interview and photograph protesters, in my capacity as a press photographer and journalist.

The aggressive police officer was right in my face, as he barked orders and questions at me. I had just been photographing an arrest on a fairly empty stretch of pavement on Oxford Street, a long way behind the protest which had, by then, moved on. I showed him my press pass. He wasn’t satisfied and demanded my ‘password’ to check it was real. His intimidating manner flummoxed me and instead of asking what I had done which was unlawful (nothing), I set about retrieving my personal password to my press association. If he didn’t believe me he could have called the number on the back of the press card – it was inappropriate and unorthodox to ask for my personal password.

After a couple of minutes with a ‘bad cop’, a relatively ‘good cop’ took over and was satisfied by my press pass. I had not done anything unlawful after all. After being subjected to several rounds of Kafkaesque questioning, the four police officers who had surrounded me moved on.

Another press photographer I spoke to was shoved twice by the police. A police officer had even grabbed his camera and pushed it in his face to move him on.

Allowing press photographers and journalists to do their work is essential to a free press and, by extension, to democracy. The attitude towards us was obstructive and intimidating. Unfortunately, what we experienced was typical of the excess force and intimidation which was turned on the protesters that day.

My experience at this protest has changed how I see the police. Call me a naive dreamer, but I thought the police would enforce the law in a reasonable way, only arrest people where necessary and only use force that was strictly proportionate. I have seen photographs and video of overly robust police presence at protests before, but there is no substitute for firsthand experience.

So what was this about? Why was I, as a member of the press, threatened with arrest? I think I was picked off as part of a deliberate strategy to create a volume of arrests, the easiest way possible. Streets were lined with police vans ready for arrestees. The police presence was huge, there were hundreds of officers. One protester told me he had even seen police with machine guns.

Police were taking people from the back and the edges of the protest, like sharks picking from the edge of a shoal of fish. They would swiftly arrest protesters, handcuff them and put them in vans to take them away to be processed. I saw this happen many times. Also, for no reason I could discern, heavy-handed police would push people on to the pavement face down to be handcuffed.

The news stories in the immediate aftermath were of ‘violent’ protesters arrested by police. But those headlines can’t have been written by journalists who were actually there. The truth is, this was largely a peaceful protest with families, children and the elderly present. There were good-humoured placards and even a protester dressed as Santa with some children as elves, whose sign read, ‘All I want for Christmas is freedom’.

There was violence later, but I am not surprised that protesters eventually reacted with anger to over-the-top, brute policing. Not long before I left, I saw about 100 officers with their helmets on, marching at pace after the protesters. My heart sank. It could have been a scene from the protests in Hong Kong.

The truth is, I started the day wanting to create a positive story about the protest and the police. I attempted to talk to several police officers, but understandably they were either too busy or didn’t want to speak to a journalist. My default position is always that we should assume the best of people and be in open dialogue. I am sure the police have a difficult job to do. I finished the day feeling shocked by the police strategies I had seen and nervous to walk past individual police officers.

What makes all this worse is that the style of policing contrasted so heavily with how the Black Lives Matter and Extinction Rebellion protests were policed. Police took the knee for BLM and sometimes didn’t even bother to do anything about XR’s stunts. Anti-lockdown protests, on the other hand, provoke excessive force. There seems to be a strategy of making lots of arrests to create a politicised media story. We have two-tier policing in London.

I spoke to protesters about why they were there. John told me he didn’t believe ‘the one-sided argument in the media’ and wanted to hear alternative points of view. I asked if he was worried about attending a protest illegally:

‘I’m bloody nervous. But it’s worth it. I had to ask myself if I am willing to be arrested and fined. The answer is yes. I don’t think I should be arrested to attend a protest peacefully, but if it happens I need to stand up for what’s right.’

Annette attended the protest because she is concerned about the impact of lockdown on children. She said she was worried about being arrested or getting hurt, but she felt ‘obliged to protest for children’.

All the protesters I spoke to were incredibly committed to and passionate about their democratic right to protest, and so the protests seem very likely to carry on. From my own experience, being threatened with arrest has left me just as committed to truth and press freedom as ever.