The Room Where It Happened reveals the malign influence of hawkish thought on US foreign policy. 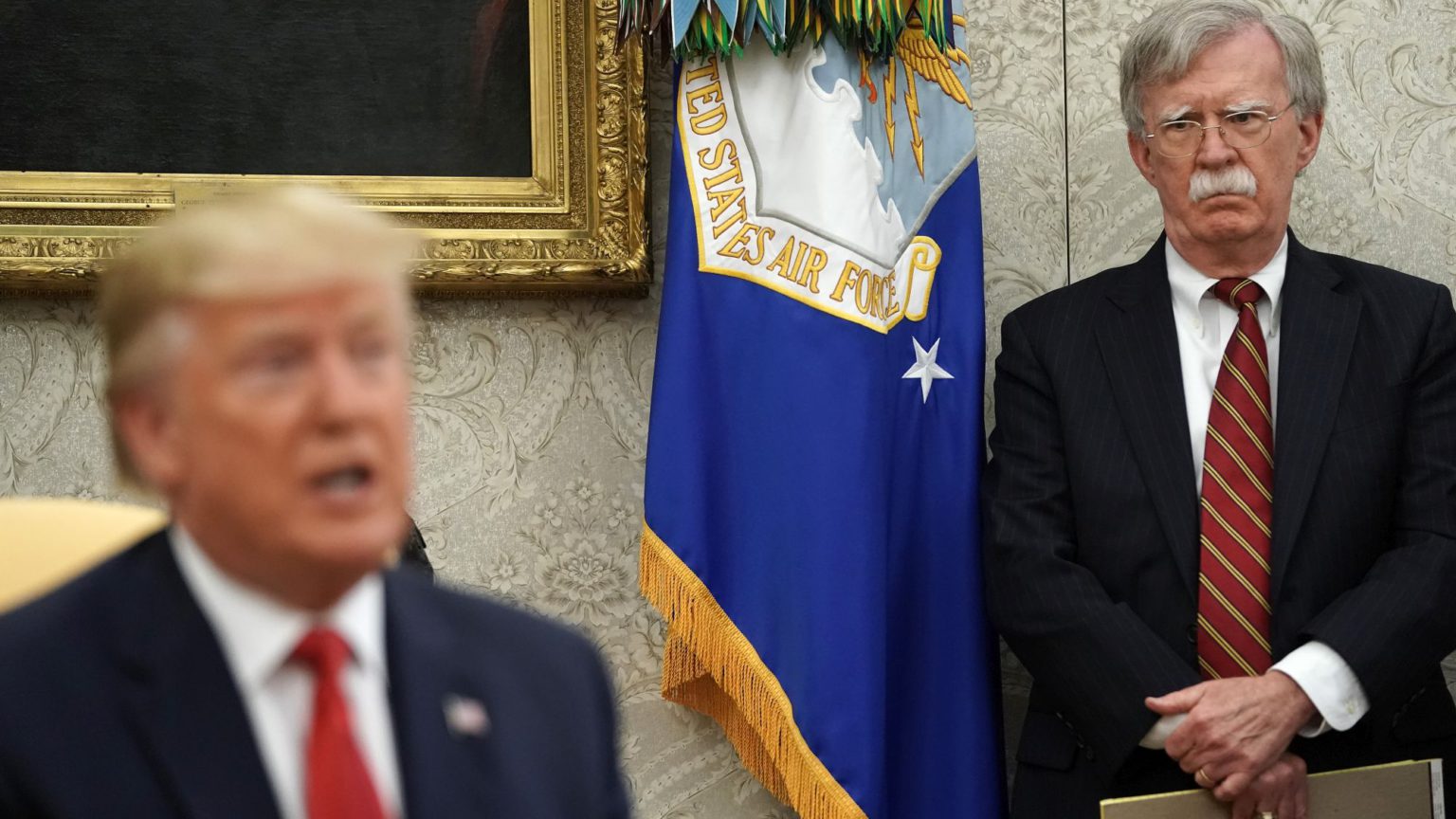 We have no shortage of fly-on-the-turd accounts of Donald Trump’s presidency. Michael Wolff’s Fire and Fury, for instance, arrived at the beginning of 2018, complete with revelations about Trump’s cheeseburger-in-bed habit. And at the end last year there was A Warning, by Anonymous, dragging tales of presidential imbecility and staff disgruntlement behind it.

But with The Room Where It Happened, Trump’s one-time national security adviser John Bolton has achieved something few thought possible. He has transformed inside experience of the crazy, dysfunctional tenure of America’s No1 egotist into a tedious dirge.

Summits are recounted in clock-watching detail, meetings reported blow-by-blow, corridor exchanges recalled in full. At one point, he even relays the recent renovation history of the White House Situation Room. This is not a powerful exploration and critique of the Trump administration written by someone who worked at its apex. It is the accumulated product of a ferocious note-taking pedant, dumped on a lazy publisher’s desk, and sent barely edited to market. Publish and be bored.

Then there’s the problem of the narrator himself. We know that Bolton, who, having loitered on the fringes of the right-wing foreign-policy establishment during the 1980s and 1990s, before serving under the pugnacious George W Bush, is the closest thing there is to a US imperialist, or a ‘pro-American’, as he himself puts it. But what’s amazing is just how arrogant he is. He is absolutely convinced he is right. No self-doubt. No reflection. No Iraq War. The man loves his own worldview every bit as much as Trump loves himself.

This superhuman arrogance explains why Bolton, knowing what everyone knew about Trump’s dysfunctional administration, still took up a role in it in early 2018. It is because Bolton always sees himself, and his worldview, as the solution. ‘Given the experiences already recounted here, and more, why accept the job?’, he asks. ‘Because America faced a very dangerous international environment, and I thought I knew what needed to be done.’ This meant, as it turns out, trashing the Iran nuclear deal, confronting North Korea, and, yes, bombing the hell out of Syria. Here’s Bolton on the (sadly, for him) one-off, US-led missile strike against Syrian government sites in April 2018:

‘That should have included attacks beyond facilities housing Syria’s chemical-weapons programme. We should have destroyed other Syrian military assets, including headquarters, planes, and helicopters… and also threatened the regime itself, such as by attacking Assad’s palaces.’

Not that Trump comes out of this well. As the widely trailed excerpts have revealed, Trump was unaware Britain was a nuclear power, thought Finland was part of Russia, and said it would be ‘cool’ to invade Venezuela. He also wanted China to boost his re-election prospects by buying agricultural produce from America’s midwest, and sought to quieten a legal investigation into a Turkish company at the request of the Turkish president.

Trump himself comes across as self-serving and capricious, prone to endless digressions and non-sequiturs, and incapable of coherent thought. He also simply doesn’t listen. Briefers can’t get a word in edgeways, and advisers, Bolton included, are addressed rather than consulted. ‘He did most of the talking’, is the recurrent punchline to Bolton’s interactions with the president.

The Trump White House is presented as unlike any of the other administrations Bolton has been acquainted with. Trump’s is ‘dormlike’, with people wandering in and out of each others’ offices, and meetings were more like ‘food fights’ than decision-making fora. ‘This is a bad place to work’, John Kelly, then chief of staff, tells him.

But the portrait is largely a familiar one. We know Trump to be a chaotic, whimsical president. And we know, too, of his boundless ignorance and insatiable ego. There is nothing new here. It’s just more confirmation of what Trump’s detractors already believe.

But what is interesting here has less to do with Trump, than with the unwitting portrait of the foreign policymaking blob in which he remains caught. The blob, that is, of which Bolton and, more worryingly, Mike Pompeo, the US secretary of state, are part. At every stage they conspire to prevent Trump from extracting the US from its military ventures abroad, and from compromising and doing deals with foreign powers, be they Iran or North Korea. For that is Trump’s instinct (it is perhaps too much to call it a principle): to strike a deal, come to an agreement, and avoid embroiling the US in yet another international conflict.

Trump’s position is not a surprise. He spoke of the folly of interventionism throughout his presidential campaign. And it seems he hasn’t really changed tack. Of Syria, he tells Bolton in April 2018 that his advisers are divided into two categories, ‘those who want to stay “forever,” and those who want to stay “for a while”. By contrast, Trump said, “I don’t want to stay at all.”’ And again in 2018, Trump tells Bolton of his frustration with the US’s continued involvement in Afghanistan: ‘It’s a horror show. At some point, we’ve got to get out… People are angry. The base wants out.’ But, tellingly, Pompeo and other members of the cabinet try to talk Trump round, telling him that keeping troops there is necessary to secure a ‘victory’. Trump responds: ‘That’s Vietnam…We don’t want this to be our war. Even if we did win, we get nothing.’

Trump may be all the things Bolton says he is. But that doesn’t mean to say Trump’s not right on the US’s ‘forever wars’ – they benefit no one.

Trump’s problem, as Bolton’s tome reveals, is that his foreign-policy instinct is being thwarted precisely by the likes of Bolton. The decision to abandon his predecessor Barack Obama’s nuclear deal with Iran is a case in point. Trump certainly wanted to break it off, which is one of the reasons he appointed Bolton, a critic of the deal, in the first place. But, as Bolton recalls, Trump makes clear in a conversation with French president Emmanuel Macron that, ‘if I end the deal, I’m open to making a new deal. I’d rather try to solve everything than leave it like it is’. The US should, he said, ‘get a new deal rather than fixing a bad deal’.

It is Bolton, Pompeo and others who refuse to countenance a new deal with the Islamic Republic. Incredibly, they want nothing less than its overthrow. Ending the nuclear deal is seen as just the beginning. As Bolton puts it after Trump finally announced that the US was withdrawing from the deal in May 2018, ‘a lot remained to be done to bring Iran to its knees, or to overthrow the regime… but we were off to a great start’.

In terms of foreign policy, Trump really is not the problem. Rather it is the so-called hawks that have too long encircled the White House, driving the US and its allies towards calamitous invasions and interventions in nations across the world, from Libya to Afghanistan. Trump’s putdown of Bolton hits the mark: ‘Frankly, if I listened to him, we would be in World War Six by now.’