Why the WHO should be scrapped

It should have been planning for pandemics, but instead it became obsessed with policing our lifestyles. 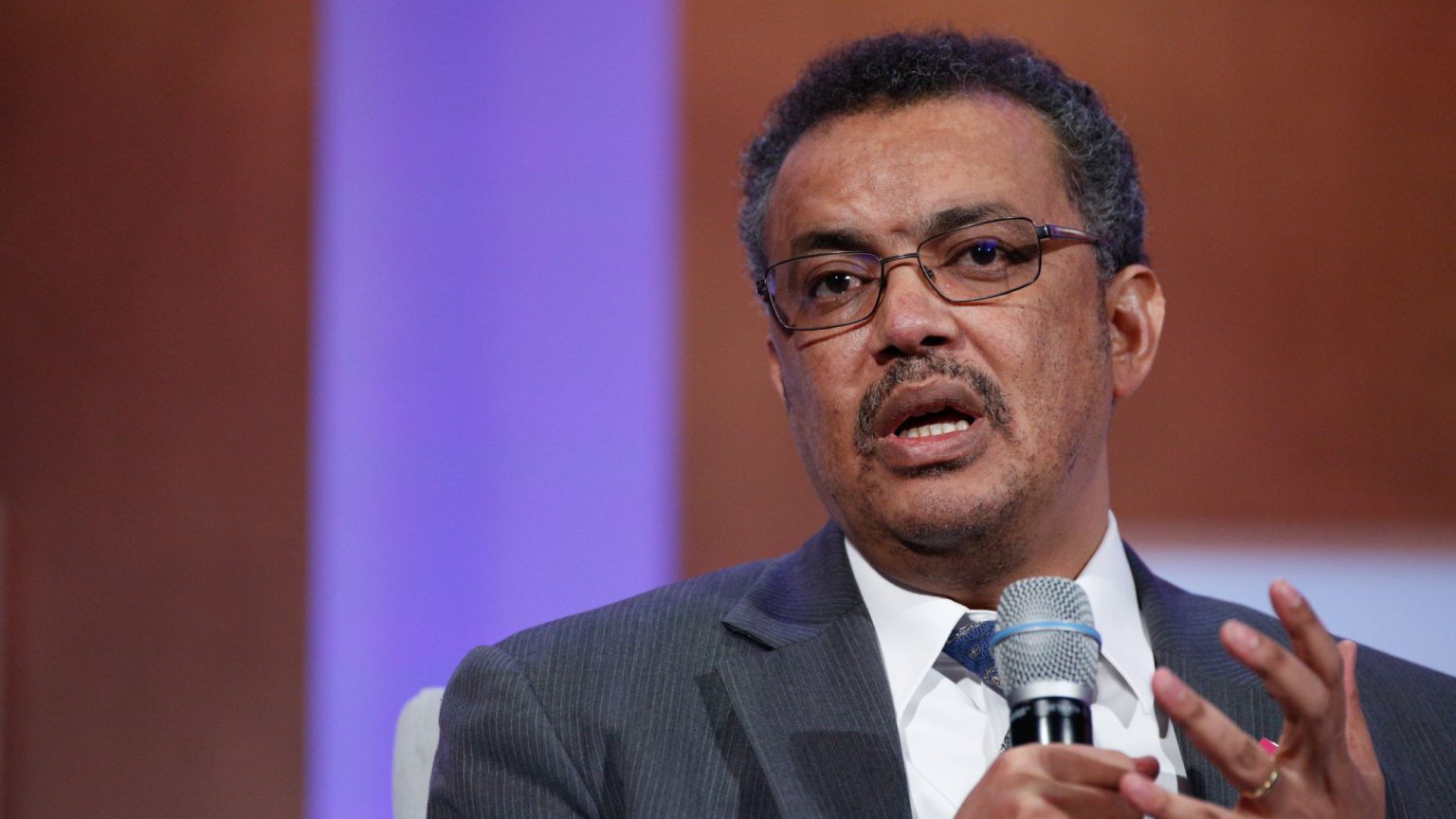 Opinion is divided on the merits of the World Health Organisation (WHO). For sections of the Western cultural establishment, the WHO possesses a sacred status and it is literally beyond criticism. The level of adulation directed towards it was underlined last week by a comment from Susan Wojcicki, the CEO of YouTube. She said that anything that contradicts the recommendations of the WHO would be removed from YouTube.

‘Dr Tedros, you’re truly a superstar’, cooed Lady Gaga ahead of the One World concert – an online celebrity-fest extolling the sacred status of the World Health Organisation. Tedros Adhanom Ghebreyesus, the director-general of the WHO, must have been delighted to have such praise heaped on him and his organisation.

Wojcicki’s insistence that criticism of the WHO constitutes a form of secular blasphemy was echoed by the numerous celebrities and politicians who came together for the One World concert. Political stars like Michelle Obama vied with celebrities like Beyoncé to demonstrate their affection for the WHO. The event captured the new status that the WHO enjoys in the global culture war.

In contrast to these celebrities, however, there are many critics of the WHO – and its response to the current coronavirus pandemic has been the last straw for them. It is difficult to avoid the impression that the leadership of the WHO has devoted far more energy to providing a public-relations cover to China’s handling of its coronavirus outbreak than it has to mobilising its own resources to fighting this pandemic. The WHO’s willingness to turn itself into a propaganda arm of the Chinese state is the main focus of people’s concern with this organisation right now.

However, there is another, arguably more important problem with the WHO, which is that its political agenda is far more interested in changing our way of life than in securing global health. At its founding in 1948, the WHO’s work was focused on combating infectious diseases such as smallpox. But in recent decades, it has fully embraced and pursued the project of regulating people’s behaviour and lifestyles. Since the turn of this century, the WHO has expanded its focus, turning towards everything from curbing tobacco and alcohol consumption to promoting campaigns against unsafe sex, obesity and high-cholesterol food. Its Global Strategy on Diet, Physical Activity and Health, introduced at the World Health Assembly in 2004, has little to say about curing illness. Rather, it is all about getting people to change their behaviour for ‘their own good’.

The paternalistic moralism that pervades the activities of the WHO speaks to the obsessive health puritanism of elite culture. We saw a striking illustration of this recently, when the WHO issued a circular titled ‘Alcohol does not protect against Covid-19: access should be restricted during lockdown’. Of course, having a glass of wine with your meal will not protect you from the coronavirus. But why does the WHO assume that the population of the world needs to be reminded of this fact?

The WHO claims that the publication of its circular is ‘part of its public-health response to Covid-19’. One would imagine that in the midst of a global emergency, its public-health response would focus on tracking the pandemic, providing advice on how to contain the outbreak, and coordinating efforts to find an effective vaccine. But the WHO appears to believe that its limited resources are more usefully spent on communicating its words of wisdom on alcohol consumption.

For the WHO, the current lockdown clearly provides an opportunity to promote its anti-alcohol message. It argues that restricting access to drinking alcohol ‘should be upheld and even reinforced during the Covid-19 pandemic’. It is evident that the motive for promoting this message has nothing to do with tackling the pandemic as such.

The moralisation of health

Ever since its inception in 1948, the WHO has been about much more than health. Indeed, it has constantly attempted to widen the meaning of health. Early supporters of the WHO believed that health should not be defined simply in physical terms, as the absence of disease or disability. Consequently, in 1948, the WHO defined health as a ‘state of complete physical, mental and social wellbeing and not merely the absence of disease or infirmity’. This broad definition led to a shift in focus in health policy, from problems that were susceptible to medical solutions to ones that required cultural and social interventions.

From the WHO’s perspective, health is a positive rather than a neutral state. Its definition of health therefore shifts the focus from the absence of diseases to the possession of a good life. That is why the WHO is preoccupied with people’s lifestyles and the mental and social dimensions of life. Take its introduction of the term sexual health in 1975, which it defined as ‘the integration of the somatic, emotional, intellectual, and social aspects of sexual being, in ways that are positively enriching’. In the decades to follow it began promoting ‘pleasurable… sexual experience’. In effect, its idea of ‘good sex’ became an integral part of sexual health, just as sexual health became a dimension of its definition of health and wellbeing. At the same time, the bizarre transformation of pleasurable sex into a health issue provided the WHO with a new opportunity to expand into the domain of people’s private life and behaviour.

The WHO’s ever-broadening definition of health underpins the elite’s obsession with lifestyle regulation and the policing of people’s behaviour. In effect, through the medium of health, the WHO’s guidance offers a system of administratively constructed norms that serve as an alternative to traditional forms of moral conduct.

Motivated by the imperative of changing people and their behaviour, the WHO has always sought to moralise the issue of health. Its ambition is to displace the traditional morality that previously guided people’s choices. It is not an exaggeration to say that the WHO has sought to politicise health in order to transform the world. This ambition was clearly outlined by Brock Chisholm, the first director-general of the WHO (1948-53). Chisholm played a leading role in the development of the WHO’s expansive definition of health. Back in 1948, he wrote that ‘a new kind of citizen is necessary if the human race is going to survive’. He added that a citizen’s loyalty ‘should not stop at anything short of world loyalty’. From his globalist perspective, people had to be detached from their narrow national loyalties and re-socialised as supposedly enlightened citizens of the world. He developed the concept of ‘world citizenship’, with a view to promoting global mental health. He regarded national cultural norms as an obstacle to the realisation of the WHO’s objectives.

Chisholm regarded traditional morality as the main cause of the world’s problems. Two years before the founding of the WHO, he complained that ‘for many generations we have bowed our necks to the yoke of the conviction of sin’. He added that ‘we have swallowed all manner of poisonous certainties fed us by our parents, our Sunday- and day-school teachers’. He concluded:

‘The reinterpretation and eventually eradication of the concept of right and wrong which has been the basis of child training, the substitution of intelligent and rational thinking for faith in the certainties of the old people… these are the related objectives of practically all effective psychotherapy.’

Chisholm was far more explicit in his condemnation of morality than others involved in the WHO. But his project of ‘substituting’ the traditional norms of right and wrong with what he termed ‘rational’ ones has been largely successful. In the 21st century, health has acquired a quasi-religious status, and the main distinction that guides the Western imagination is not so much right and wrong as safe and unsafe.

The unfortunate consequence of the ideology underpinning the WHO is that it medicalises human behaviour. This has led to a society so obsessed with health that we have lost sight of the distinction between issues of lifestyle and far bigger and more profound health threats. That is why in the middle of this pandemic, the WHO has decided to take time off to lecture citizens about their drinking habits.

It is regrettable that the WHO has taken such a wrong path. We need an international organisation that can effectively coordinate global efforts to deal with widespread threats to human health. The faster we find a replacement for the WHO, the better.

Frank Furedi’s latest book, Why Borders Matter: Why Humanity Must Relearn The Art of Drawing Boundaries, will be published in June by Routledge.