The party leaders are negotiating away our democracy

Before the ‘Boris lock’ there was a ‘Corbyn lock’ – both are an affront to democracy. 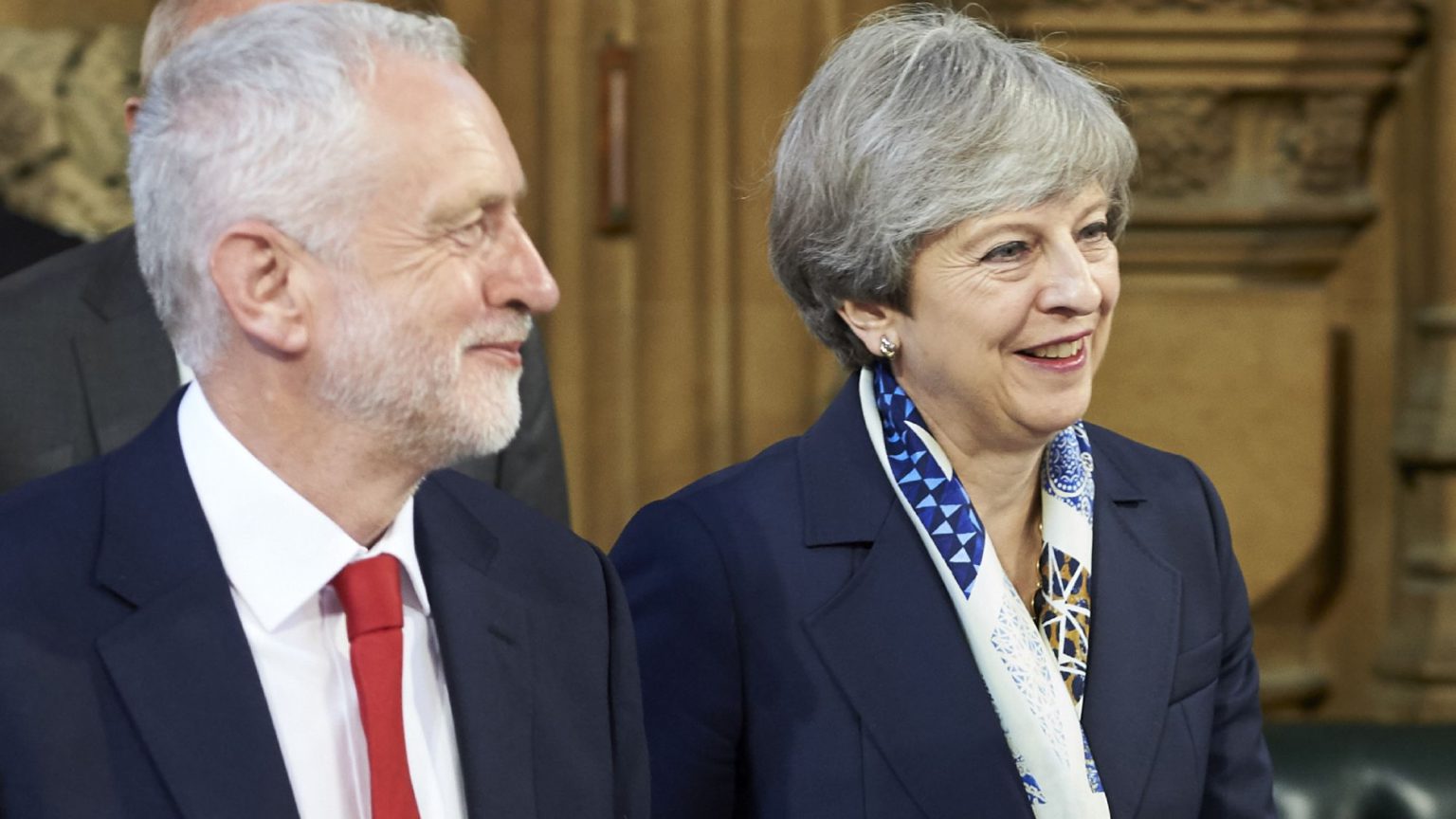 The chaos in the House of Commons over the past few months has made abundantly clear that elected representatives of all hues are desperate to bury, water down or overturn Brexit. The problem is that they cannot agree on how. Now Theresa May has invited the Labour Party leadership for cross-party talks to try to water down further her non-Brexit deal. She hopes a softer Brexit will win the support of Labour and get her disastrous deal over the line.

An apparent sticking point in the negotiations between the two parties is over membership of the Customs Union. To be clear, both sides are in absolute agreement that Britain should remain in the Customs Union in defiance of the public’s wishes to leave it. Remaining in a core EU institution like the Customs Union means that Brussels will retain significant control over Britain’s trading arrangements. Customs Union membership will also keep Britain within the jurisdiction of the European Court of Justice in some policy areas. Naturally, this half-in-half-out option is more attractive to our overwhelmingly pro-Remain political class than a clean Brexit is.

May and Corbyn’s policies are different only in language. Labour’s policy of ‘a permanent customs union’ – the party laughably claims that this is distinct from the Customs Union – is slightly more explicit in intent than the customs proposals in the Tories’ sell-out Withdrawal Agreement. In the Outline Political Declaration tacked on to May’s deal, which sets the tone for the next stage of the Brexit talks, it says that the UK and the EU will seek to ‘build and improve on the single customs territory’.

The Times reports that senior ministers have been trying to persuade Jeremy Corbyn that the withdrawal deal contains the Customs Union ‘in all but name’ (while telling the opposite to Tory Brexiteers). As trade expert Shanker Singham points out in an interview on spiked, the government’s decision to make very few changes to our customs processes over the past two years betrays its true intentions: ‘The only reason not to upgrade our customs facilities was if the government was planning all along to remain in the EU Customs Union.’

It has also emerged from the talks that a crucial condition for Labour to back a re-packaged version of May’s deal is that it is made ‘Boris proof’. In other words, it must not be unpicked by a future Eurosceptic leader – one who might have ideas about actually taking Britain out of the EU in line with the demands of the British public. A so-called ‘Boris lock’ could be implemented through British legislation or via EU treaty. Although in practice a government can never truly bind its successors to any course of action, it can make it as difficult as possible for them to stray from a course of action, either through domestic legislation, constitutional innovations or via the withdrawal treaty.

It is hard to overstate how anti-democratic the intention behind this is. The public voted to leave the EU. The two parties stood in the 2017 General Election on a promise to leave the EU. Now those parties have agreed that they will avoid leaving the EU and Labour is demanding that no future government should attempt to leave the EU, either.

Of course, Labour is by no means the only party of anti-democrats. Before the ‘Boris lock’ came a ‘Corbyn lock’. Under May’s deal, the EU’s rules around state aid and competition will continue to apply to the UK. These rules pose a clear hurdle to future left-wing governments. Outside of the EU, without state-aid rules in place, a Corbyn government would actually be able to fulfil some of its promises to the electorate around nationalisation and industrial policy, in a way that it cannot inside of the EU.

Essentially, state-aid rules exist to prevent democratically elected governments from intervening too much into the economy. They are explicitly designed to keep economic matters outside of the democratic realm – away from the pesky voters, whose needs and demands will often differ from those of the capitalist class. May is desperate to enshrine these rules into her withdrawal treaty so that they can continue to temper democratic demands for economic intervention, even when we are technically out of the EU.

It should be up to the voters, not EU technocrats, to decide if Britain should have a more interventionist or more laissez-faire government. Brexit ought to be a great opportunity to bring economic policy under democratic control, opening up possibilities for reshaping our ailing economy. Instead, May and her negotiators want to use the EU, even as we ostensibly leave it, to close those possibilities down for the foreseeable future.

When it comes to the talks between the Tories and Labour, ignore the phoney battle over the wording around the Customs Union. Because both parties agree that British democracy should be limited and constrained. They need to be told: democracy ought to be non-negotiable.