Turning the UK into an EU colony

May’s Withdrawal Agreement makes a mockery of the Brexit vote. 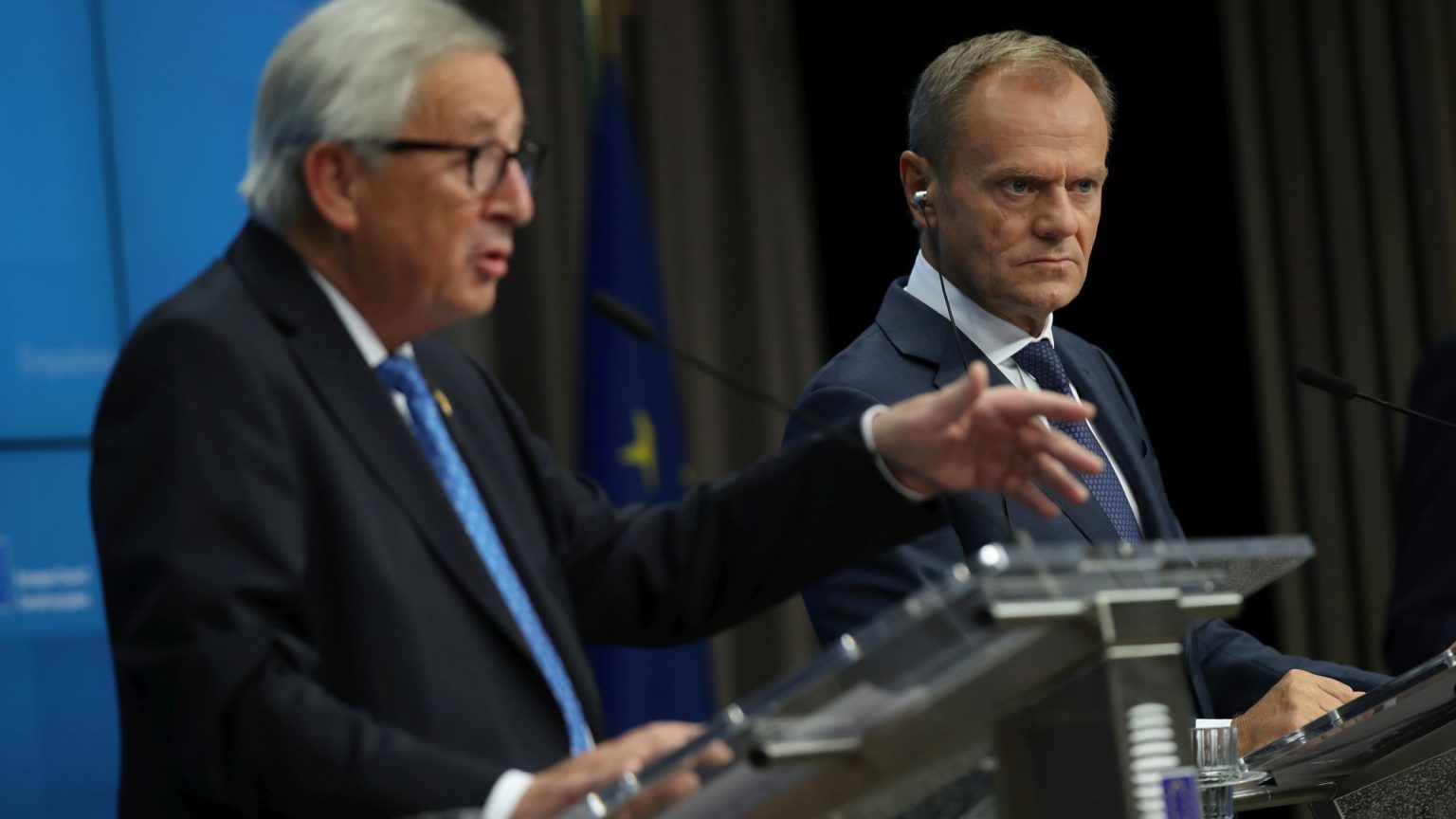 The desire to repatriate sovereignty from the European Union motivated 17.4million Britons to vote for Brexit. The sentiment was so strong that the Conservative Party fought the 2017 General Election with a manifesto commitment to deliver a Brexit that would repatriate EU law to the UK, end the jurisdiction of the European Court of Justice, and permit an independent trade policy. But the terms unveiled by the British government in its draft Withdrawal Agreement last week, if ratified and incorporated into British law, would not pass those three tests regarding EU law, ECJ jurisdiction and trade.

The Withdrawal Agreement is a lengthy and dense legal text, but essentially it envisages three future relationships between the UK and the EU after Brexit takes place on 29 March next year: transition, backstop and bespoke.

Transition will commence the moment Britain formally leaves the EU, and the bespoke future relationship is intended to be ready for when transition ends at the end of 2020. But in the event of the bespoke relationship not being ready in time, the parties can either extend transition or trigger the backstop. The effect of each of these relationships on UK sovereignty should alarm everyone – not just those who voted to take back control, but anyone who aspires to live in a state that can control its own destiny. There is ample force in the criticisms made by Leavers (such as Boris Johnson) and Remainers (such as Jo Johnson) that the UK is heading for a relationship with the EU that is best described as colonial, with the UK as the dominated state.

During transition, the EU’s powers over the UK will continue as if the UK were still an EU member. In other words, Britain would continue to be subject to EU laws in areas such as trade, tariffs, farming, fisheries, EU migration, VAT, health and safety, employment and many other areas of social policy. The agreement states that EU law will continue to have ‘the same legal effects as those which it produces within the Union and its Member States’ (Article 127). And the jurisdiction of the ECJ over the UK will be unaffected (Articles 86 and 131). During transition, laws made by the EU, which will then be a foreign body, will be effective in Britain and they will be interpreted by the ECJ, a foreign court.

During transition, the EU’s writ over Britain will apply not only to existing laws – which British ministers and officials have been able to shape – but also to all new laws which will be framed by the EU without any input from the UK (Article 128). Furthermore, the transition period, although expressed as initially lasting until 31 December 2020, can be extended indefinitely (Article 132). Any such extension will require further annual payments from the UK that will be set by the EU, unencumbered by the budget rebate that Britain currently secures (Article 132).

This is breathtaking. The EU’s right in this agreement to determine British laws in all areas that are currently covered by EU treaties would, for example, enable the EU to continue to treat British territorial waters as its own. The humiliating nature of this set-up is confirmed in the agreement when it states that the UK ‘shall be consulted in respect of the fishing opportunities related to the United Kingdom’ (Article 130). Let that sink in: Britain, a nation surrounded by sea, will be ‘consulted’ by the EU over the extent to which the EU allows it to fish in its own territorial waters.

When – or if – transition ends, the UK will enter either the backstop or the as-yet undrafted bespoke arrangement. The main problem with the backstop is that it ties the UK into a plethora of continuing EU obligations, most significantly those that regulate the EU Customs Union. The UK would effectively remain a member of it. The UK will also have to comply with what the agreement calls ‘level playing-field conditions’ which cover issues such as taxation, environmental standards, labour and social standards, state aid, and competition policy (p311).

These provisions mean that the UK will effectively also remain a member of the EU Single Market. Swathes of public policy will continue to be decided by Brussels. The UK will be unable to increase its competitiveness by deregulating or sign trade agreements with other countries. The point here is not that these objectives are necessarily desirable; it is that any debate about them will be pointless. Many British laws will continue to be made in Brussels, with legislators reduced to administrators and with citizens stripped of their democratic right to decide.

As for ECJ jurisdiction, it will continue throughout any backstop. Under the agreement, the ECJ will be required to rule on disputed issues of EU law and its decisions will be binding (Article 174). In other words, the EU’s rulebook, or acquis communautaire, insofar as it applies to the UK will, during the backstop, be interpreted by a foreign court, rather than by a neutral third party, as is usual for international treaties.

Compared to EU membership, the backstop relationship would at least enable the UK government to control most (but not all) EU immigration, and large annual payments to the EU would also stop. But this modest repatriation of powers would come at a heavy price. The backstop ties Northern Ireland into even greater regulatory control. As a result, there will be a regulatory and customs border down the Irish Sea. As the agreement notes, ‘unfettered market access for goods’ is only envisaged when it relates to Northern Irish exports to the rest of the UK (p304). The likelihood is that Northern Irish imports from the rest of the UK would be subject to checks. In other words, the backstop provides for the United Kingdom to be fractured (something that could quickly spread from Northern Ireland to Scotland).

The third possible arrangement, a bespoke arrangement between Britain and the EU, has yet to be drafted. But its nature can be ascertained from the political declaration that accompanied the Withdrawal Agreement. This referred to a future economic partnership ‘combining deep regulatory and customs cooperation, underpinned by provisions ensuring a level playing field’ and an ‘alignment of rules’. What’s more, this political declaration states that a ‘basis for cooperation’ is the UK’s ‘commitment to the European Convention on Human Rights’ and the EU’s Social Charter. Each of these treaties, if incorporated into the bespoke relationship, would emasculate UK sovereignty.

British membership of the EU has always been an affront to national sovereignty. But at least Britain retained a unilateral right to leave the EU. Under the Withdrawal Agreement, the UK will have no unilateral right to end its terms. If ratified, the treaty would have binding legal force and the UK would only be able to terminate it with the EU’s consent. Or, to put it another way, the EU would be able to veto the UK’s departure from any of the envisaged future relationships.

Much has been made of the length of the agreement: 585 pages. But its tenor can be understood by considering one page. It provides that ‘all references to Member States… shall be understood as including the United Kingdom… except as regards… the participation in the decision-making and the attendance in the meetings of the institution’ (Article 7). Under a transition, backstop or a bespoke relationship, the UK will not be in the EU, but it will be ruled by the EU. The proposed relationships only vary with regard to the extent of the EU’s power over us. Worse, by locking the UK into a treaty from which there is no unilateral right of departure, the British government is proposing to bind successive governments and successive generations to the terms of the Withdrawal Agreement.

The Brexit vote was a demand for more sovereignty. Now we are on the verge of becoming an EU colony. This is truly perverse.