For years, the Five Star Movement has opposed infrastructure development. 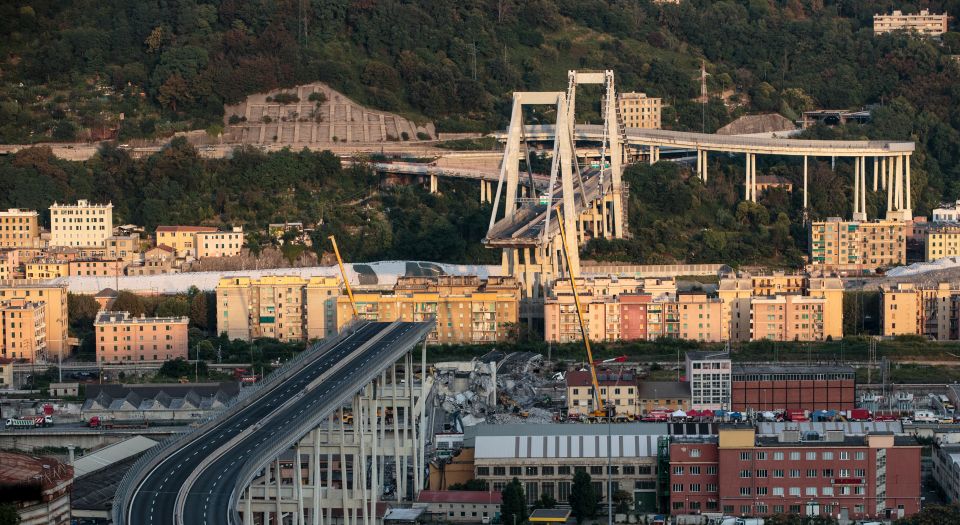 As we mourn the more than 40 dead from the 14 August collapse of the Morandi Bridge in Genoa, and hope the injured recover, investigators are trying to identify its causes. Firstly, they need to assess whether recent repair works carried out on the bridge contributed to its collapse. The bridge should have been able to withstand the stormy weather that hit Genoa on 14 August, including the reported lightning strikes. Early indicators also point to structural weaknesses, and there had been long-term local concerns about insufficient maintenance work on the bridge.

Given that the Morandi Bridge was over 50 years old, it required sustained and significant monitoring and maintenance. In the 1980s the uneven and bumpy original road surface was corrected. Suspension cables added in the 1980s and 1990s were replaced in the early 2000s. Degradation of the concrete, and the appearance of cracks, prompted a debate about demolishing the bridge in 2009, and a major refurbishment was carried out in 2016. Questions are now being raised as to the quality of these works.

Unfortunately, instead of allowing the investigators to do their jobs, the Italian government has resorted to immediate blaming. Deputy prime minister and leader of the League, Matteo Salvini, took a swipe at EU limits, of three per cent of GDP, on budget spending. ‘We should ask ourselves whether respecting these limits is more important than the safety of Italian citizens. Obviously for me, it’s not’, he declared. But while it is true that this rule has exerted pressure on Italian governments to reduce spending, the EU cannot be blamed for this disaster.

According to the League’s coalition partners, the Five Star Movement, Autostrade per l’Italia, the company responsible for maintaining the Morandi Bridge, is to blame. Danilo Toninelli, the Five Star Movement’s minister for infrastructure and transport, has called for the heads of the company to step down. ‘Autostrade should have done maintenance work and didn’t do it’, echoed Five Star Movement leader Luigi Di Maio. Immediately after the bridge collapse, Di Maio threatened to revoke the contract with Autostrade per l’Italia for maintaining Italy’s roads, and an inquiry has been opened to explore this. The company and its management need to be held accountable, but they should not be judged guilty before the investigation into the disaster is conducted.

These kneejerk blame games fail to appreciate deeper issues at play. In the 1990s, to prepare for Italy’s participation in the Eurozone, centre-left governments, led by Romano Prodi and Massimo D’Alema, privatised almost 3,000km of Italy’s motorways and their maintenance. This enabled private companies to generate revenue by limiting road maintenance and new construction. Huge profits have been made by one of the beneficiaries of this privatisation, the Atlantia group, which is 30 per cent owned by the Benetton family and controls 88 per cent of Autostrade per l’Italia. Between 2013 and 2017, Autostrade spent €2.1 billion on ‘maintenance, security and driveability’ on its motorway network, made profits of €4.05 billion, and paid €3.75 billion in dividends to Atlantia and other investors

It is often these relationships between businesses (legitimate and illegitimate) and government (national and regional) which undermine infrastructure development and maintenance in Italy. Of course, shortfalls in overall spending reduce maintenance. Italy spent over €14 billion on road infrastructure in 2006; this fell to less than €4 billion in 2010. But between 2010 and 2015, Italy had higher average spending on roads per km than most other European countries.

In Italy, many roads and infrastructure projects were constructed with poor government control in the 1960s and 1970s, including the Morandi Bridge. In many cases, ‘unfortified cement’, with a disproportionate amount of sand and water, was used during those years to save money. And since then, maintenance has often been insufficient, leading to accidents. Over the past five years, there have been 10 bridge collapses in Italy, although none as serious as the Morandi disaster.

In 2012, Giovanni Calvini, then president of the Genoa chapter of the General Confederation of Italian Industry, campaigned for the construction of the Gronda bypass because ‘within 10 years the Morandi Bridge will collapse’. Former Five Star Movement councillor Paolo Putti responded in 2012 by stating, ‘Autostrade has said to us [that the Morandi Bridge] will be on its feet for another 100 years’. Putti even shared a stage with Grillo at a public rally against the Gronda bypass in 2014.

At the start of August 2018, Toninelli, the Five Star Movement’s minister for infrastructure and transport, called for ‘a complete review, and also to consider abandonment’ of the Gronda bypass, along with many other national infrastructure projects. Surprisingly, Di Maio declared on 17 August, three days after the bridge collapsed, that he was open to the Gronda bypass, as part of the reconstruction of Genoa.

A formidable reconstruction of the Morandi Bridge is crucial for the population of Genoa, especially the 600 people made homeless by this tragedy. But with the Five Star Movement in government, the disaster is likely to reinforce anti-development tendencies, which will make the people of Genoa and Italy suffer more from the failings of Italian development and politics. No wonder the families of 17 victims of the disaster boycotted the official state funeral held on 18 August.