We trust the demos more than the experts

You don’t need a PhD to understand the world and want to change it. 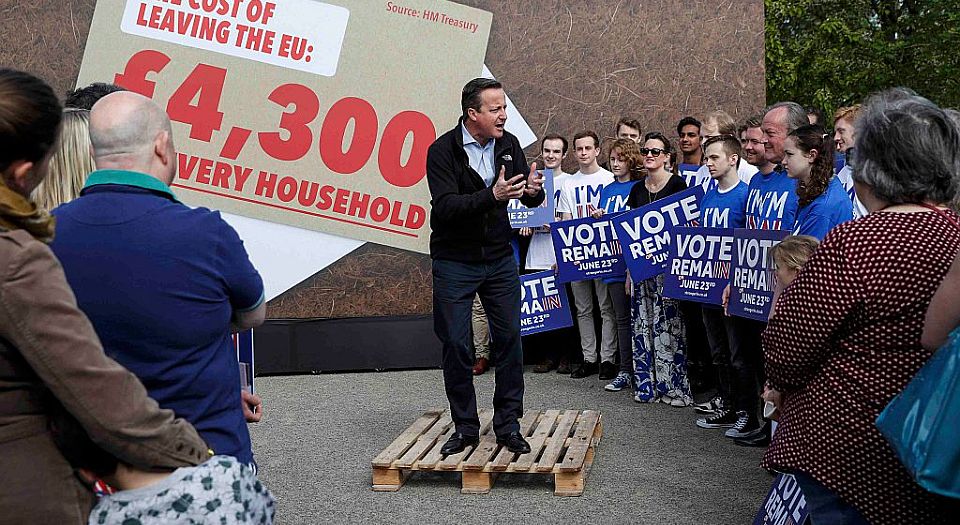 We’re told that we’re entering a new era, the era of post-truth politics. We’re told that you can see its emergence in the figure of US presidential aspirant Donald Trump, who issues conflicting, outlandish claims at the drop of a keystroke. And now, ahead of the EU referendum, we’re told that you can see it in the UK, too, in the Leave campaign, in its callous disregard for facts and its blithe dismissal of the views of experts, those ‘that think they know what is best’ for us, as prominent Leaver Michael Gove put it.

It almost sounds convincing. On the side of truth and facts are the Remainers. They are practising politics as it’s meant to be practised, issuing informed arguments based on the views of experts. But those in favour of leaving the EU aren’t playing fair. They’re ‘confusing’ voters, as David Cameron put it. They’re telling people that the future is not set in stone, that they don’t have to do what the academically titled, institutionally accredited are telling them. And they’re making their own claims, claims that do not come with official, expert approval. Rascals and charlatans, the lot of ’em.

But look a little closer at the post-truth phenomena and something else, something older, emerges. Of course, the defenders of truth and fact look like they’re attacking a new breed of politician, a new form of political discourse, in which truths are invented, facts constructed, experts doubted. Indeed, it looks like they’re criticising the political culmination of postmodernism, where there’s no such thing as truth. Yet their target is not really the supposedly post-truth politics of Donald Trump or Boris Johnson or Nigel Farage. It’s not even their supporters, those few who take Johnson’s words as gospel. No, their target is those who might disagree with the experts, those voters who might be guided by something other than the facts – those, that is, who resist the calls of the secular priesthood to vote according to the one and only truth. One pro-EU commentator even likened those thinking of voting Leave to those who doubt that smoking carries a health risk. ‘They’ve been warned by the economic establishment that a vote to Leave would be an act of economic self harm’, he wrote, ‘but in growing numbers, they refuse to believe it’.

But this is not a new argument, let alone the sign of a new post-truth era. Rather, it’s the intensification of a long, millennia-old tradition of anti-democratic thought, which, while reaching back at least as far as Plato’s Republic, with city states ruled over by the proto-expert philosopher kings, developed its most explicit formulations during the great enfranchise-expanding struggles of the modern era.

So, when the Chartists were struggling to win the vote for all men in the 1830s, they were told that the masses were not sufficiently well-informed or intelligent; when the Suffragettes were trying to win the vote for women, they were told, in the words of one MP, that ‘the mental equilibrium of the female sex is not as stable as the mental equilibrium of the male sex’; and even after universal suffrage had been secured in the West during the 20th century, many on the right, such as Walter Lippmann, who called the electorate a ‘bewildered herd’, and the left, such as Noam Chomsky, who worried about the electorate being duped, its consent ‘manufactured’, continued to suggest that many of us were not up to the task of voting.

It is this anti-democratic refrain that we hear in the words of the Remainers: people are incapable of exercising their democratic right. They’re too easily misled, too simply tricked, or too often ignorant. Enter the experts, the priestly class, to point them in the right direction.

To criticise the role of the experts in politics today is not to demean expertise or specialist knowledge. If you have a medical problem, consult a doctor. If your laptop starts playing up, consult a technician. If you want to know about earthquakes, consult a geologist with a specialist interest in plate tectonics. In their fields, scientists or engineers or physicians should not only be listened to – they should be free to develop their knowledge and expertise. But authority in a technical field can’t simply be carried over into politics. Politics is not science. The future of society – its running, its ordering, its values – cannot be discerned as our medical fate might be in a doctor’s prognosis.

That’s because society is not an object apart from some scientific, expert observer, armed with his knowledge of its properties and natural laws; rather, it’s something that we, as its acting, thinking participants, help to fashion, to shape, to make. As Sylvia Pankhurst said of the ‘great [democratic] reformers’, they wanted to ensure ‘every man had an equal chance to share in controlling the destinies of the nation’. That’s right, ‘controlling the destinies of the nation’. No caveats about the facts, or ‘as long as they’re well informed’. Controlling, exercising agency, determining society’s future – that was the aim. And we are better able to realise this – that is, to control the ‘destinies of the nation’ – if we are able to give full expression to our political and moral views, to win and lose arguments, to debate and to contest. Which is very different to the circumscribed, facts-only vision of politics vented by expertise’s representatives on Earth.

To say the future is open for us to make, however, is not to endorse empty utopianism. It’s merely to point out that the future is not factually predetermined. It is defined by ‘uncertainty’, not undermined by it. There are social and economic challenges (or opportunities, depending on how full your glass is). But there are no iron laws of economic necessity – except, perhaps, in the depths of Stalinist-era economism. The future’s not a fact to be discovered by the IMF or the Treasury; it’s something that we realise.

So, to oppose the suffocation of political debate, the attempt to rally support for one view as the factually correct, ‘expert’ view, is not to be against expertise. It is to be for the people. It is to assert that, in political matters, public opinion – that amassed articulation of moral and political values and material and social aspiration – is always to be preferred to elite wisdom. It offers a guide to the future that people want, rather than the future which a coterie of the well-connected tells people they should have. Politics, you see, is not exactly post-truth. It’s about proving the truth, in this case, proving that we, as a society, will be better able to determine our collective future, better able to reinvigorate our public and political sphere, outside the EU.