Scotland: once again the demos save the day

The masses are far more rational than the unhinged political class. 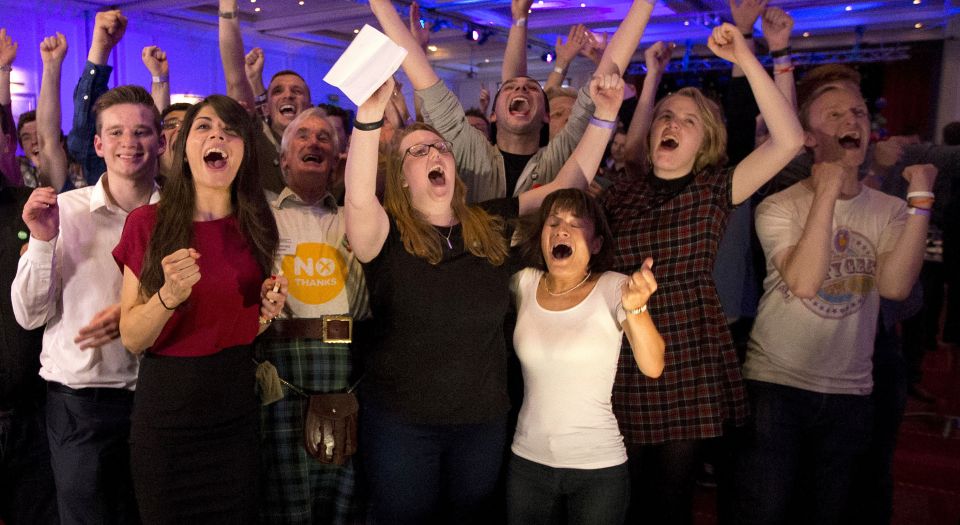 The events of the past 24 hours confirm that the demos remain the most trustworthy force in politics.

As Britain’s political class lost its head, first by initiating a needless referendum on the Union and then through shrilly panicking about the collapse of the Union, the electorate kept their heads screwed on, calmly and numerously visiting polling booths to prevent the tearing apart of their nation.

The victory of the No vote in Scotland is not down to David Cameron’s pro-Union interventions or the agitation of the Better Together campaign. Nor is it, as the Yes camp would have us believe, evidence that Scots succumbed to the fearmongering of the big banks and others who spoke of a post-independence economic depression. Rather, it’s a case of the level-headed mass of the population keeping in check the whims and vanity of an increasingly out-of-control political elite.

The No victory was pretty solid. On a turnout of 84.59 per cent, 2,001,926 said No to a split from the United Kingdom, compared to 1,617,989 who said Yes. The pro-Union sections of the political class are already trying to claim credit. David Cameron looked smug in his televised statement. He congratulated Alistair Darling, spokesman for Better Together, on his ‘well-fought campaign’. In truth, if anything the victory for No came in spite of, not because of, these politicians’ interventions.

Better Together’s campaigning style was utterly negative, its attempts to galvanise Scotland around a sense of panic about independence having the effect of turning many off. Cameron and Co’s emergency visits to Scotland also angered many, making it appear to them – rightly – that the political class had only just realised what was at stake in this poll. As for the political elite’s use of the banks to spread concern about an independent Scotland’s economy – this was stunningly anti-democratic, effectively saying ‘There Is No Alternative’ to the Union, and it also had great potential to backfire given how unpopular the banks are.

So Scottish voters should be congratulated not only for resisting the shallow promises of Alex Salmond, but also for refusing to allow the low style of politics deployed by Better Together to put them off doing what they felt what was right: holding together their nation against those who wanted to break it up for no good reason.

What the No victory ultimately represents is a mass rejection of the constitutional incontinence of the modern political class. And it isn’t only Scots who have said a resounding No to what they see as an unnecessary overhaul of constitutional arrangements and creation of new layers of political activity. Across the UK in recent years, voters have rejected the political oligarchy’s non-stop technical tweaking of the constitutional, political and electoral systems.

In 2004, there was the referendum to have a devolved assembly for the North of England, a bizarre stunt dreamt up by John Prescott. The No was resounding: 77.9 per cent of those who voted rejected this vanity project. Then in 2011 we had the Alternative Vote referendum, another completely uncalled-for attempted overhaul of the political system. Turnout was low – 42.3 per cent – but rejection was overwhelming: 67.9 per cent said No. Last year we had the first Police and Crime Commissioner elections in England and Wales: a whopping 86 per cent of us didn’t vote, silently signalling our rejection of this stunt too, this attempt by the Lib-Con coalition to make the police feel more ‘in touch’ with the public. Even where voters have said Yes to constitutional overhaul, it is not always massively convincing. So in the Welsh devolution referendum in 1997, which created the Welsh Assembly, the Yes camp won only 6,721 votes more than the No camp (559,419 to 552,698).

In all these instances of frenetic top-down tweaks to politics as we know it, the driver was the desperation of the political class to find a way to connect with a population it feels completely cut off from. There was no grassroots demand for new ways of voting or devolved assemblies; rather, these initiatives were invented behind closed doors by elites panicked by their lack of electoral and moral legitimacy and their gaping distance from the public. They were attempts to find technical fixes to what is in fact a profound political problem, and the people, for the most part, weren’t interested.

Scottish independence should be seen in the same light. This, too, was a top-down idea, concocted by SNP officials rather than called for by crowds. This, too, was fundamentally a technical solution to a political problem: in this case the problem of many people’s feelings of exhaustion with the Westminster elite and modern politics in general. And this, too, was rejected.

What all of these rejections of attempted reforms tell us is that the caricature of the modern electorate as flighty and easily influenced is often the opposite of the truth. Read any of the literature on contemporary democracy and you will find claims that voters are fickle, changeable, heavily influenced by the media, incapable of working out what is in their own best interests, never mind their nation’s. Yet in Scotland yesterday, and across Britain in recent years, we saw the electorate behave in a manner far more rational and reasoned than they’re ever given credit for. In fact, it is the political class that appears unanchored today, possibly even unhinged, forever dreaming up needless initiatives, often in response to what it perceives to be media pressure. And it’s the electorate that often acts as a block to all this, saying either ‘No’ or ‘We’re not interested’. So in Scotland it fell to the people – ‘the mob’ – to do what the political class is incapable of doing: hold together the 307-year Union in the face of a self-serving attempt by the Scottish political elite to break it up.

And how does the political class respond? By promising more devolution to Scotland anyway. By promising to devolve powers across the UK. That is, through promising to keep on pursuing the very thing people seem uninterested in: the elitist creation of more desperate-to-connect forms of politicking. Who’s really out of control here? It isn’t the public; it’s the political class, so desperate to magic up some moral legitimacy for itself that it’s willing to sell off longstanding political arrangements and possibly even the Union itself.

So was what happened in Scotland a great day for democracy? Not necessarily, no. For we need to bear in mind that the Scottish people didn’t ask to vote on the Union – they were made to through the actions of small Scots cliques. We are continually offered phoney democracy today: new assemblies and institutions and focus groups. When will our rulers realise that expanding democracy is not a technical thing but a political thing, a question of ideas? The weakness of our democracy is not revealed by any lack of institutions (there are more than enough) but by a lack of political depth and ideological heat. Democracy is a political thing, concerning competing ideas and giving people real choices. In the UK today, it can’t be revived through the creation of new voting systems, parliaments or states; it requires the cultivation of an energetic, ideas-packed public sphere.