The Democrats deserve a drubbing in the Midterms

They have shown nothing but contempt for voters’ concerns. 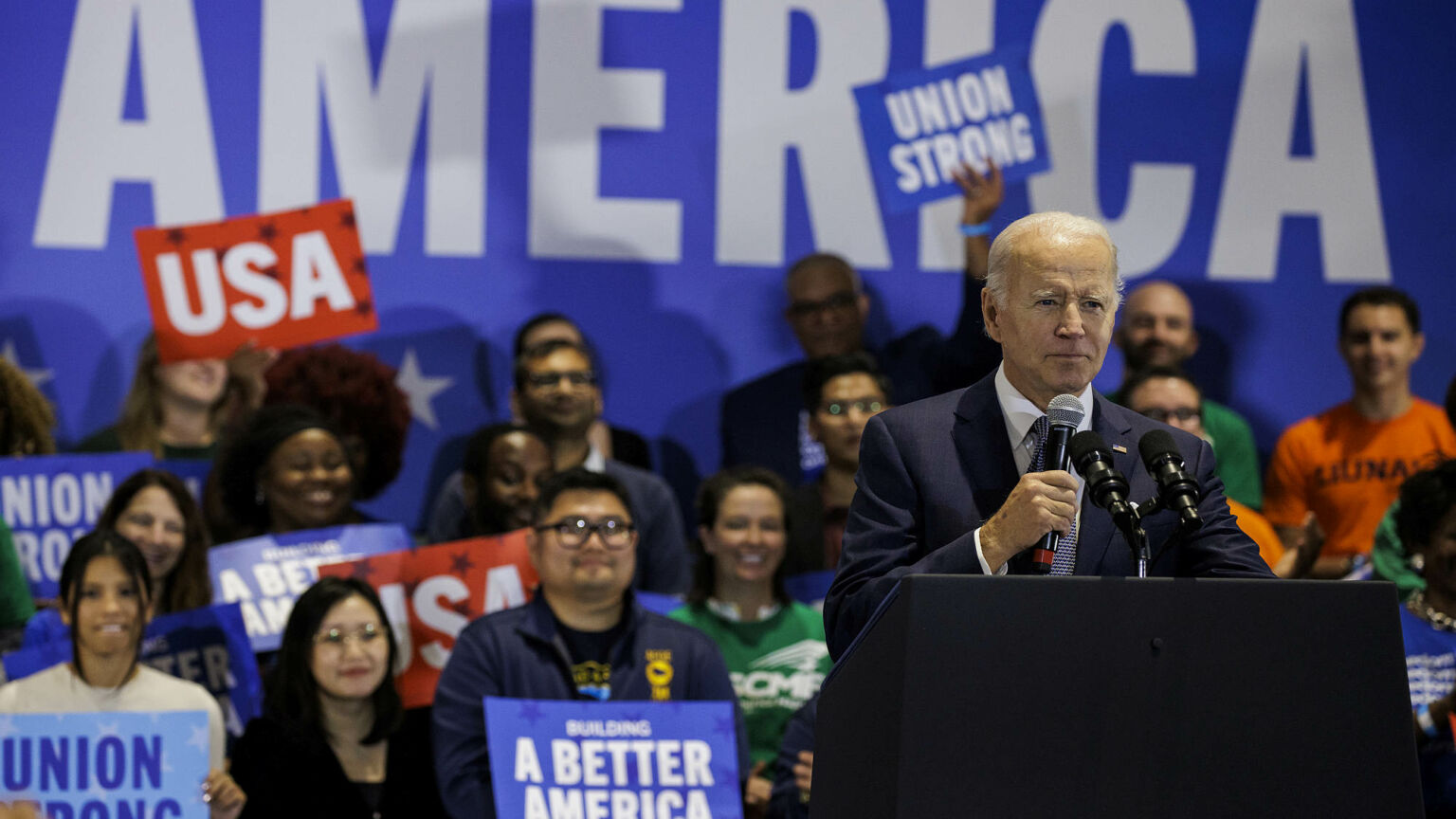 With about a week to go until the US Midterms on 8 November, pundits are predicting a ‘red tsunami’ – that is, huge Republican gains across the country. Democrats know it and are ‘[bracing] for a red wave in the House’, according to the New York Times. They are even having to spend resources defending formerly safe seats.

So, in a sign of things to come, Democrats have already begun the blame game. As a sorry Politico headline has it: ‘Democrats debate themselves: why do we suck?’ Some Democrats say it is their messaging. For others, it is a lack of focus on jobs and inflation. Barack Obama believes the Democrats’ problem is that they have become too woke. The former president warns the Democrats not to be ‘buzzkills’, saying that political correctness makes people ‘feel as if they are walking on eggshells’. Everyone is looking to blame something.

Whatever the cause, the Democrats are right to be worried. At stake in the Midterms is control of Congress, as well as many state governorships and legislatures. Right now, the Democrats have effective control of both the House of Representatives and the Senate (the latter is split 50-50, but vice president Kamala Harris casts tie-breaking votes). The Republicans need to flip only five Democratic seats to retake a House majority, and polls indicate they will do so handily. In the Senate, the Republicans need only one seat from the Democrats, and their chances look promising in Arizona, Georgia and Nevada. Controlling both the House and Senate would be a huge win for the Republicans, meaning they could block president Joe Biden’s agenda for the remaining two years of his term.

It is true that, in terms of the election cycle, the Democrats are swimming against the tide. Since the Second World War, the party holding the White House has lost an average of 28 House seats in the first Midterms of a new presidency, according to the American Presidency Project at the University of California, Santa Barbara.

The Democrats also have Biden weighing them down. Biden’s approval rating is a dismal 42.7 per cent, according to Real Clear Politics. And there are other signs of widespread discontent in the US. A CBS News poll finds that eight in 10 likely voters describe things in the country today as ‘out of control’.

The Democrats’ campaigning has not helped, either. In fact, their messaging has only reinforced the impression that they are out of touch with ordinary Americans. A Harvard CAPS / Harris poll finds that the issues of most concern to Americans are inflation, the economy, immigration and crime. The poll also found that people trust the Republican Party most to deal with all four issues. In contrast, voters believe that the Democrats’ priorities are the ‘January 6’ riot and Trump, women’s rights / abortion and climate change. These issues are far down the list for most Americans, but are dear to the hearts of the Democrats’ activist base.

These contrasting priorities are playing out in the contest for governor of New York State. New York would ordinarily be an easy win for incumbent Democrat Kathy Hochul. But Republican challenger Lee Zeldin is poised for a big upset. Zeldin has been hammering Hochul on crime, while Hochul and the Democrats pretend that the recent rise of lawlessness is a myth. In a recent debate, when Zeldin said Hochul’s bail reforms meant criminals weren’t getting locked up, the clueless Hochul could only declare: ‘I don’t know why that’s important to you.’ Hochul’s pitch to voters is that Zeldin is a Trump supporter, opposes abortion and is against gun-control laws. Yet none of these issues are at the forefront of New Yorkers’ minds.

To add to the Democrats’ misery, in the past few weeks, debates around schools and parental rights have shot right back up the political agenda. These issues have given a huge boost to Republicans in recent elections. Last week, the Centers for Disease Control recommended that children should get vaccinated, something that the vast majority of American parents do not agree with. This has given the Republicans another issue to use against pro-mandate governors like New York’s Hochul and Michigan’s Gretchen Whitmer. Also last week, a national report revealed a dramatic fall in test scores for maths and reading since the pandemic. It highlighted just how devastating school closures were for kids. It was a reminder to parents that Democrats and their allies in the teachers’ unions were the strongest backers of shutting down schools.

Back in the summer, there was a lot of talk about how poor-quality Republican candidates, especially those backed by Trump, were going to blow what should be easy wins for the party. It is certainly true that the Republicans have a lot of poor-quality candidates – Doug Mastriano (running for governor of Pennsylvania), Herschel Walker (senate candidate in Georgia) and Blake Masters (senate candidate in Arizona) are among a number of especially weak contenders. But the Democrats have exactly the same problem. In the race for governor of Arizona, Democrat Katie Hobbs was supposed to walk over the Trump-backed Kari Lake, but her poor presentation skills and her unwillingness to debate Lake have cost her in the polls.

Meanwhile, in Pennsylvania, the Democrats are paying the price for backing John Fetterman, who suffered a stroke back in May. For months, Democrats and their media allies have pretended that Fetterman’s health has been unaffected, but that blew up on them last week during a debate with his Trump-backed opponent, Mehmet Oz. Fetterman struggled to speak throughout, which made for excruciating viewing. It also exposed the many mainstream media outlets, which knew about Fetterman’s real condition, as having downplayed it to protect their favoured party.

With every grim new poll, you can hear Democrats consoling themselves that they are the victims of the election cycle and other external factors. Indeed, they often repeat the claim that inflation is a ‘global problem’, which they can do nothing to tackle. But in reality, the Democrats’ policies have made many of the problems angering voters much worse. Biden poured gasoline on inflation with his unnecessary $1.9 trillion Covid relief package – which was signed months after the worst of the pandemic – and with a $500 billion student-loan handout to his affluent base. Biden and the Democrats have also driven up gasoline and energy prices with green policies that have cut the supply of oil and gas. These include cancelling the Keystone XL pipeline between the United States and Canada, pausing the issuance of new oil-and-gas leases on public lands and generally declaring war on fossil fuels.

On crime, Democrats have followed much of the radical policy agenda favoured by Black Lives Matter. This includes ‘defunding the police’ and passing no-bail laws, as has happened in New York State, which has eliminated the requirement for cash bail for most crimes. At the same time, progressive district attorneys are failing to prosecute crimes.

Meanwhile, on immigration, the Biden administration has pursued a policy of willful neglect, dismissing legitimate concerns about chaos at the border as racist propaganda, all while failing to pursue a strategy for legal and safe immigration into the country.

Rising grocery and gasoline prices are hitting working-class people the hardest, so it is no wonder that workers are turning away from the Democrats. For years, Democrats reassured themselves that black and Hispanic workers would remain loyal, even as they were losing white workers. But this year’s election in Nevada, where the Democrats have long relied on a large bloc of minority working-class voters, could pop that balloon. ‘If Democrats can’t win in Nevada, we can complain about the white working class all you want, but we’re really confronting a much broader working-class problem’, a Democratic pollster told Politico last week. Nevada shows the broader, deeper issue the Democrats are facing with all working-class voters, regardless of race.

Of course, we don’t know how the results will play out on election night. Voters have confounded the polls before. And all the talk of a ‘red wave’ has now lowered expectations for the Democrats so much that anything less than a complete ‘shellacking’ (as Obama described his party’s losses in 2010) may be spun as a type of victory. But if the Democrats do end up facing electoral wipeout, they will have only themselves to blame.