The culture war is destroying equality before the law

The new elite uses policing and the law to impose its values on the rest of society. 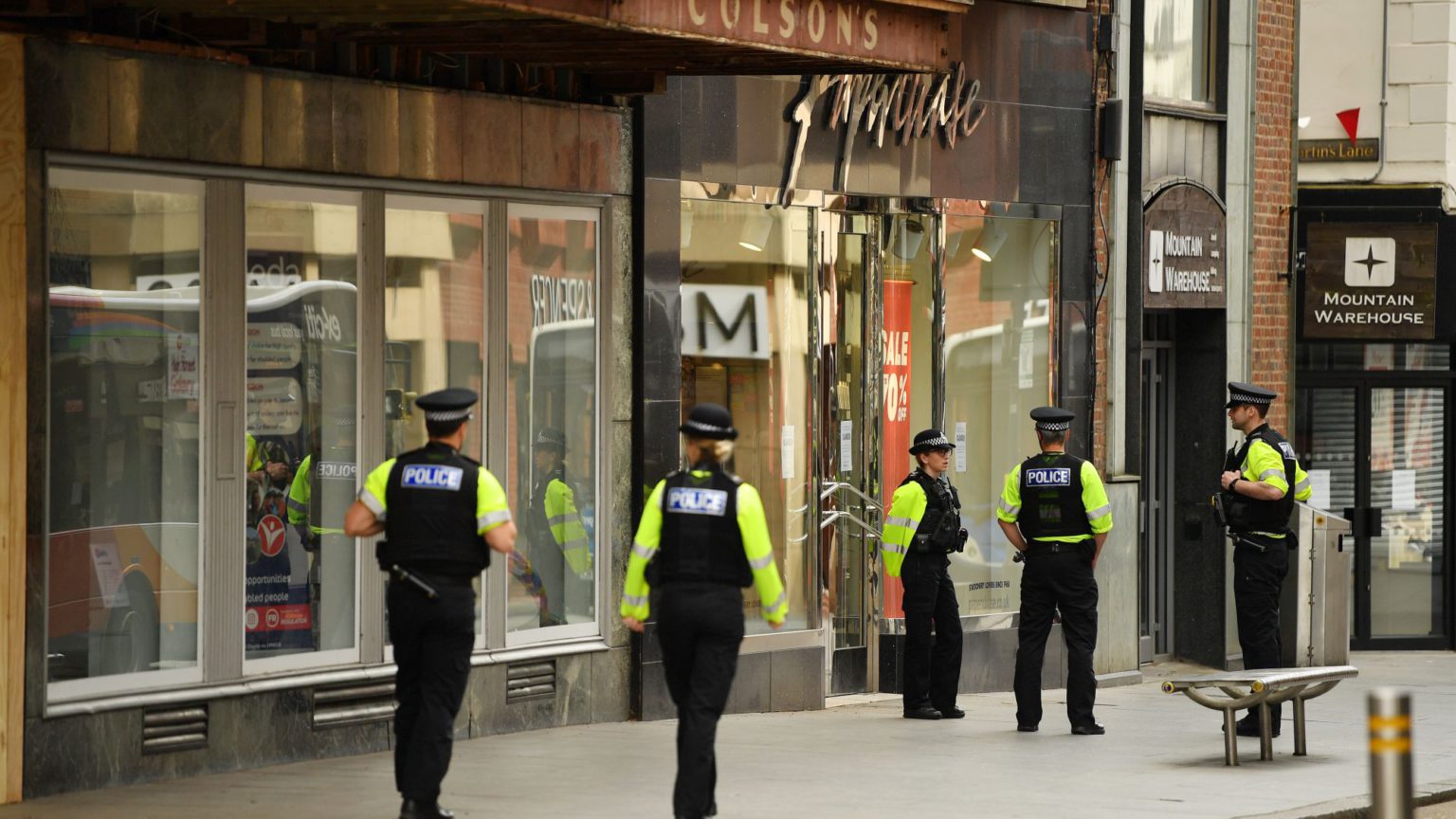 In Britain and the US the law is becoming an ass. Liberals historically held up the impartiality of law as central to what made these countries great. The system, at least in theory, was based on the key universal principle that all men and women would be treated equally before the law. Today this is being torn to shreds as the culture war is incorporated into legal and police practice, making a mockery of the most basic principles of law.

If the bias within the British criminal justice-system and political class wasn’t already obvious, the differential treatment of Black Lives Matter protesters compared to other people who have breached lockdown rules has helped further drive a coach and horses through the idea of equal treatment before the law.

In the US, many public-health experts refused to condemn the BLM gatherings while at the same time stating that, ‘This should not be confused with a permissive stance on all gatherings, particularly protests against stay-home orders’. So, just to be clear, for this group of experts BLM demos should be allowed, while those demonstrating against the lockdown should be targeted by the law.

Journalists, another section of the new elite, have been similarly biased. In the UK, an online BBC news report of the London demonstration was headlined: ‘27 police officers injured during largely peaceful anti-racism protest in London.’ The following weekend, a counter-protest took place in London, with many protesters drawn from the far right. Only six police officers were injured this time, but the BBC reported this as ‘violent clashes with the police’.

And of course we have all seen the muted, sometimes even supportive approach adopted by police authorities themselves to some of the protests, violence and vandalism in cities in the US and the UK.

With the recent Dominic Cummings case, the point was often made that he was wrong to drive where he did without consequence – ‘there’s one rule for them and another for the rest of us’ went the argument. But this is an outdated understanding of who ‘us’ and ‘them’ are today. Indeed, the mass outrage by the media about Cummings should at least raise questions about the idea that the ‘toffs’ are lording it over the little people.

Today, the form that ‘us’ and ‘them’ takes is less the old class divide and more one best summed up by Hillary Clinton when she denounced a vast swathe of voters as ‘deplorables’. Here we find the new elite standing not as advocates for traditional values and institutions, but rather as advocates for ‘the vulnerable’, in opposition to the ‘basket of deplorables’ – who are, ‘racist, sexist, homophobic, xenophobic, Islamophobic’, as Clinton put it.

This incorporation of the culture wars into politics has been replicated in the development of law and policing practices in the past two decades. We can see this quite clearly in the development of hate-crime legislation in the UK, where the same criminal act is punished more severely if purposefully carried out against a person with what is now called a ‘protected characteristic’. In defining particular groups of people as ‘vulnerable’, the law is explicit in its move away from a universalist approach to crime and punishment. Instead, we literally have a law which grants more protections to certain groups than to others (whether they want it or not).

This process of prioritising certain crimes above others has been seen in Scotland, where violent crimes have been downgraded while hate crimes and cases of domestic abuse, even where no violence has taken place, are prioritised. The policing of domestic violence, for example, has been accompanied by an overzealous and interventionist approach to people’s private lives. But few if any criticisms are publicly raised about these police practices which have, at times, impacted badly on both the accused and the alleged victims.

Reach for the Scottish police training manual and you will not find a booklet that prioritises an understanding of law, order or even crime. Police Scotland’s Initial Training Course Manual 1 starts with a 50-page explanation of ‘Diversity Awareness’. Those who are not ‘aware’ are the people we are now meant to be concerned about, the people the newly educated cops know all about – the deplorables.

The deplorables, in the British context, can be summed up by the put-down terms ‘Sun reader and ‘Daily Mail reader’, or as Fintan O’Toole put it, the ‘people with tattooed arms and golf-club buffers’. These are the imagined bigots that make up white Britain, the ‘White Van Man’ coupled with his more middle-class compatriot who lack not only the political but also the cultural and even emotional awareness of the metropolitan elite. These men and women are the targets of modern law and order.

We can see this even in the popular depiction of crime itself. In the 1970s and 1980s, for example, crime was a conservative, right-wing issue. It was street crime, muggers and robbers who captured the imagination and who were depicted in cop dramas. Crime was also politically linked to radicals and hedonists, to outsiders and militants – the ‘enemy within’, as Margaret Thatcher called them. Criminals were seen as lefties.

Now, with TV programmes like The Good Fight, crime has been reconstructed through the minds of the modern liberal elite and has come to be associated with the deplorables, the racist, sexist bigots, who have become the new abusive ‘baddies’ responsible for all the crimes that matter.

Deplorable football fans in Scotland have been severely criminalised and policed over the past decade. The Offensive Behaviour at Football Act (now repealed) was a law that specifically banned offensive language among football fans while ensuring the cultured types – your poets and artists – were excluded from the law. Here, what are depicted as ‘sectarian’ (ie, racist) fans have particularly been targeted with a variety of laws and initiatives to change their behaviour or their ‘culture’ – with the threat of up to five years in prison for their offensive behaviour.

This targeting of Celtic and Rangers fans – the Old Firm – included one campaign that attempted to discover ‘Old Firm domestic violence’. They are football fans, they are sectarian bigots, so clearly they must also beat their wives, went the argument, and police actions and interventions developed accordingly.

Even before the Offensive Behaviour at Football Act was passed, a man called Stephen Birrell was imprisoned for eight months for his online rants. His crime was to say he wants Celtic scumbag, Fenian tattie farmers to die. There was no threat of violence, simply an inane drunken rant. Sheriff Bill Totten explained that by arresting Birrell, he intended to ‘send a clear message that the right-thinking people of Glasgow and Scotland will not allow any behaviour of this nature, or allow any place in our society for hate crime’. It seems it was not enough for the right-thinking people of Scotland simply to disapprove of foul language – it had to be criminalised and Birrell needed eight months in a cell to help him to become aware.

Online offences are being politicised and policed by the new elite. Facebook has a new board of censors filled with right-on individuals who approve of deplatforming deplorables. In right-thinking Scotland, the YouTuber Count Dankula was found guilty of offending people with a comedy video of a pug doing a Nazi salute.

Similarly, in England, there was the case of Harry Miller, who was harassed by the police for posting trans-sceptical tweets. And the list goes on, following a similar pattern, with similar targets and issues being addressed by laws, online authorities, political pressure and police practices – all developing a new form of criminalisation and policing of ‘deplorable’ individuals, ideas and thoughts.

There also appears to be a scale of deplorability – the more right-wing a person is, the more they can expect the authorities and the law to interfere in their lives and activities. In 2012, for example, a pregnant mother of three, Toni McLeod, found that getting her children back from social services was at least in part dependent upon her giving up her friendship with people associated with the English Defence League. The social work report read, ‘Toni needs to break away from the inappropriate friendships she has through the EDL… in order that she can model and display appropriate positive relationships to the baby as he / she develops’. Toni needed a culture change and the Durham County social-work department was going to make damned sure she developed one.

The culture war against the deplorables is not only a matter of who is being criminalised but also who is not being criminalised. We have seen, for example, the divergent attitudes to mass gatherings during the pandemic as well as to acts of vandalism and violence recently. This was previously clear in the case of Extinction Rebellion, which brought areas of London to a standstill and dug up or vandalised other parts of the UK with barely a raised eyebrow from onlooking police.

We have also seen the numerous cases of grooming gangs, made up of largely British Pakistani Muslim men, who used and abused thousands of underage girls while authorities turned a blind eye and the media said little. Those who spoke up, like Labour’s Sarah Champion, were ostracised. Champion’s crime was to claim that Asian grooming gangs had been allowed to thrive because people are ‘more afraid to be called a racist than they are afraid to be wrong about calling out child abuse’.

The silence about the sexual abuse of underage girls also stands out in contrast to the #MeToo campaign which had an enormous impact on institutions across the UK. This involved largely middle-class professional women who rarely experienced anything like the levels of abuse that the girls in Huddersfield, Rotherham, Newcastle, Rochdale, Peterborough, Aylesbury, Oxford, Bristol and Keighley were subjected to.

These cases are important because they demonstrate what is becoming increasingly clear – that there is a war going on, not just in culture, not just in politics, but in law and on the streets of Britain where PC police officers are helping to transform the nature of policing across the UK.

Britain is becoming a country less of the haves and have nots than the chavs and the chav-nots – a country not only divided by cultural differences but also one that is becoming increasingly authoritarian as the new elite attempts to enforce its cultural values on the entire population with the threat of law, policing and ultimately prison.