The media story about Dominic Cummings has collapsed

This has been a truly shocking week for British journalism. 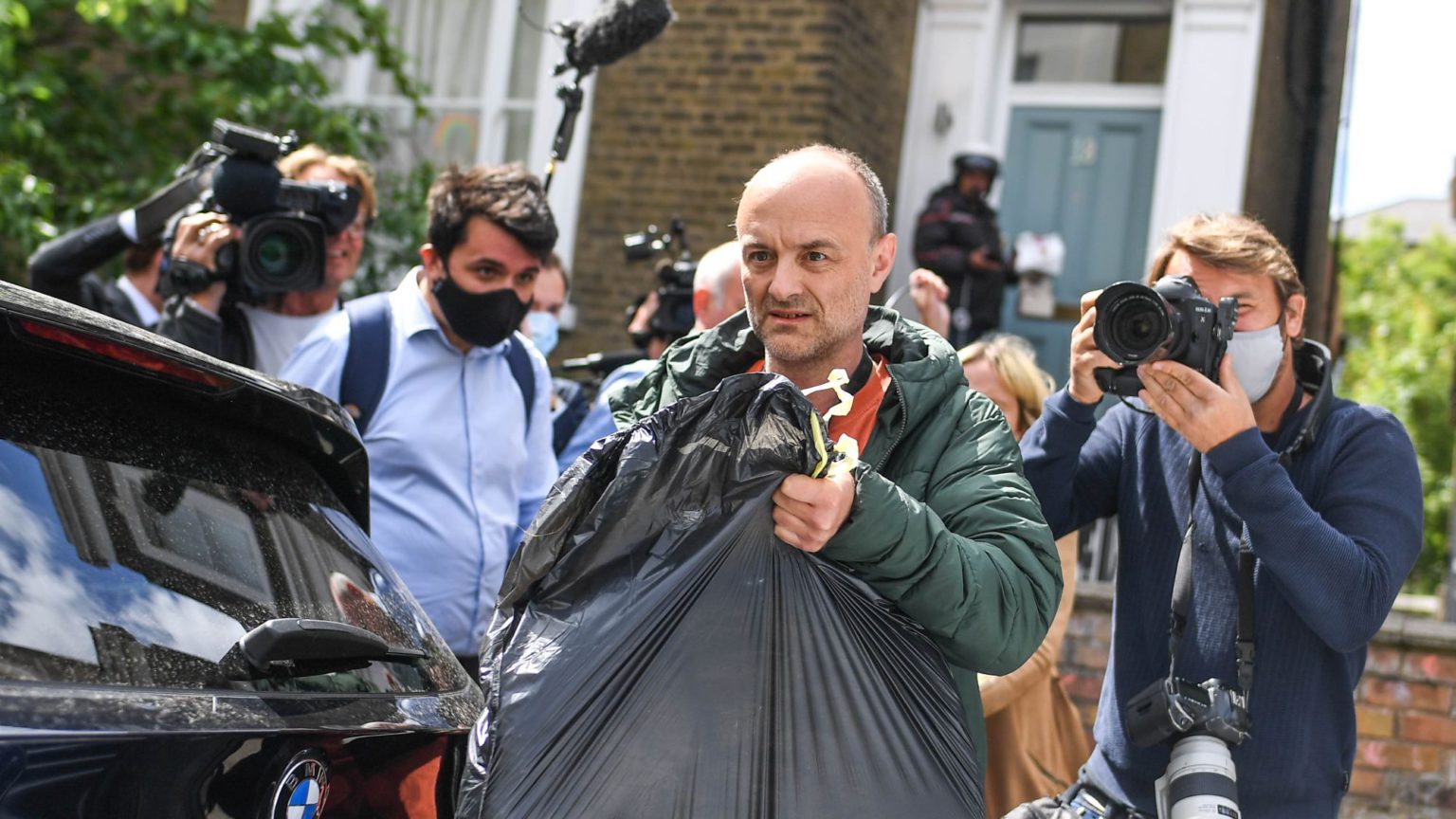 British journalism has had a terrible week. One of its worst of recent times. The hysteria over Dominic Cummings has clouded journalistic judgement and led to the publication of false claims and untrue stories. Here are some of the things journalists have said that have turned out to be untrue or at least not backed up by evidence.

This was a transformative claim in the Cummings hysteria. Its impact cannot be overstated. It turned what was a story about a man doing what he thought was best for his family, rightly or wrongly, into a story of an arrogant political adviser gallivanting round the country while the rest of us suffered. It was published on the frontpage of the Sunday Mirror and the Observer. It generated hundreds of thousands of tweets, all condemning Cummings for being a serial lockdown breaker.

But there is no evidence to back it up. The story was based on the eye-witness testimony of an anonymous couple who claim to have seen Cummings and his wife in Durham on 19 April, days after Cummings said he had returned to London. That’s it. It is highly unusual to base a frontpage exclusive on the words of two random members of the public with no corroborating evidence. Cummings says he did not go to Durham twice. Boris Johnson says he has seen evidence that confirms Cummings was not in Durham in late April, when the second trip was said to have taken place. The Durham Police said there is ‘insufficient evidence’ to support the claims of a second visit.

This key part in the Cummings story, this claim that turned it from a minor affair into a huge scandal, seems to have fallen apart. And yet the newspapers that published it, and the tweeting journalists who promoted it, have offered no clarification. Extraordinary.

2) He took a walk among the bluebells

While the rest of us languished in lockdown, Cummings was in the lovely north walking through fields and admiring bluebells. He was hanging out at beauty spots and having a fine old time. Or so we were told.

The bluebells claim – that during his second visit to Durham he visited beauty spots and smelled the flowers – went viral. It became a talking point for talking heads, for whom this image of a modern-day Machiavelli hanging out in nature while everyone else was stuck inside summed up everything that is foul about the Boris government. The country was locked down and yet Cummings took a ‘secret road trip’ to ‘check out some famous bluebells’, snarked Tom Peck at the Independent.

But so far as we know, the bluebells thing did not happen. The story of Cummings and the bluebells came from the Sunday Mirror’s now highly unquestionable ‘second visit to Durham’ story. It was those two seemingly mistaken anonymous eye-witnesses who said they saw Cummings in Durham on 19 April who claimed that Cummings had said to them: ‘Aren’t the bluebells lovely?’

The wild spreading of this story, via the supposedly respectable media and among the Twitterati, is a classic case of confirmation bias. Hacks’ pre-existing loathing of Cummings led them to believe these claims uncritically and to transform them into perfectly symbolic evidence of the out-of-touch nature of the Boris set. Now that it seems Cummings was too busy working in London to be admiring bluebells in Durham, will the people who made this story go viral apologise? We know the answer to this question.

3) The police spoke to the Cummings family about lockdown rules

This was also a transformative claim: that cops visited the Cummings family home in Durham and spoke to Cummings himself about the lockdown rules. ‘Police spoke to Dominic Cummings about breaching the lockdown rules’, the Guardian reported. Illustrating the seriousness of this explosive claim, the Guardian swiftly followed up with the line: ‘There are now calls for his resignation.’

This story was based on a comment from Durham Police itself. It went viral. It became a classic scene in the Cummings hysteria: the man who is central to the government that locked down the country having to be reminded by the police about the importance of adhering to the lockdown. But it now seems that this never happened. It now seems that when Downing Street denied these claims and said the police did not talk to the Cummings family about ‘this matter’ – ie, the lockdown – it was telling the truth.

The Durham Police updated their claims. They have now made clear that a police officer, at the request of Cummings’ father, visited the home of Cummings’ parents and offered advice on security issues. Given the throngs we have seen outside Cummings’ London home in recent days, and the fact that Sky News door-stepped Cummings’ parents in Durham, it is entirely understandable that the Cummings family would want some pointers on security.

So this extraordinary image – of the police having to tell a senior government adviser to stick to the lockdown rules – also appears to be a fantasy. You will be searching for a very long time to find any clear corrections to the articles that pushed this seeming myth, with the assistance of the bumbling Durham constabulary, into the public realm.

He’s a criminal! He completely defied the lockdown! He snubbed the rules he himself probably had a hand in drafting! This has been a key claim of commentators, tweeters and the yelling activists outside Cummings’ London home for a week. It’s poppycock.

As the Durham Police made clear yesterday, much to the disappointment of the anti-Cummings mob in the media and among the middle-class left, Cummings didn’t do anything particularly bad. The police said they did ‘not consider an offence was committed’ when Cummings and his wife and child drove to Durham; have not seen evidence that he visited Durham for a second time; and that his 30-mile drive to Barnard Castle on Easter Sunday – which is the only scandal the anti-Cummings lobby has left following the collapse of all their other claims – ‘might have’ been a ‘minor breach’ of the lockdown rules.

That’s it. One minor breach – possibly. For that, the media have spent a week obsessing over Cummings and ignoring or sidelining far more important stories, about care homes, the implementation of test-and-trace, the declining number of virus infections, the urgent need to lift the lockdown, and so on. What a catastrophic failure of journalism we have just witnessed.

5) Britain has the highest Covid death rate in Europe

Leaving aside Cummings for a moment – it would be great if the media could do likewise – we’ve also had the Financial Times telling us this week that Britain has the highest Covid-related death rate in Europe. Only we don’t. Spain does. The morbid death-watchers at the FT, who seem to relish their daily revelations of death stats, had to publish a correction. That’s something, at least. Of course the original claim spread like crazy through chattering circles, while the corrected truth was only talked about by a few. All of which proves the maxim: ‘A lie can travel halfway round the world while the truth is putting on its boots.’

This awful week for journalism ended with perhaps the most brazen display of media mythmaking. Senior journalists claimed that Boris Johnson, being Britain’s very own Putin, had ‘gagged’ his chief medical officer, Chris Whitty, and chief scientific adviser, Patrick Vallance. At the daily Covid news briefing, he prevented them from answering a question about Dominic Cummings on the basis that they shouldn’t talk about politics.

The outrage was intense. We have become a banana republic, some claimed. ‘This is not a real news conference’, said the BBC’s Nick Robinson. ‘Boris Johnson bans CMO Chris Whitty and CSA Patrick Vallance from giving their opinions on Dominic Cummings’ lockdown activities’, said the Sun’s Tom Newton Dunn. A Guardian piece this morning claims Boris is ‘the UK’s very own dictator’ who ‘silenced’ Whitty and Vallance.

Untrue. All of it. And what is extraordinary is that anyone who watched the news briefing will know that it is untrue. They will have seen with their own eyes and heard with their own ears as Whitty said, ‘I can assure you that the desire not to get pulled into politics is far stronger on the part of Sir Patrick and me than it is in the prime minister’, and they would have heard Vallance say, ‘I’m a civil servant, I’m politically neutral, I don’t want to get involved in politics at all’.

There you have it. From the experts’ own mouths. The media desperately wanted to politicise these neutral scientific and medical advisers, and the advisers said: No, thanks. No gagging, no banning, no Putin-esque clampdown – just experts refusing to dance to the tune of the Cummings-obsessed media.

This is where we have ended up following this atrocious week for the British media: in a situation where journalists are making things up about things we the public can see and hear for ourselves. We watched Whitty and Vallance saying ‘We really don’t want to comment on this’ and then we watched the media say ‘They’ve been banned’. It’s a kind of madness. Journalists are sacrificing their sense, their reason and their objectivity at the altar of their feverish Cummings obsession. That’s the true scandal of the past seven days.