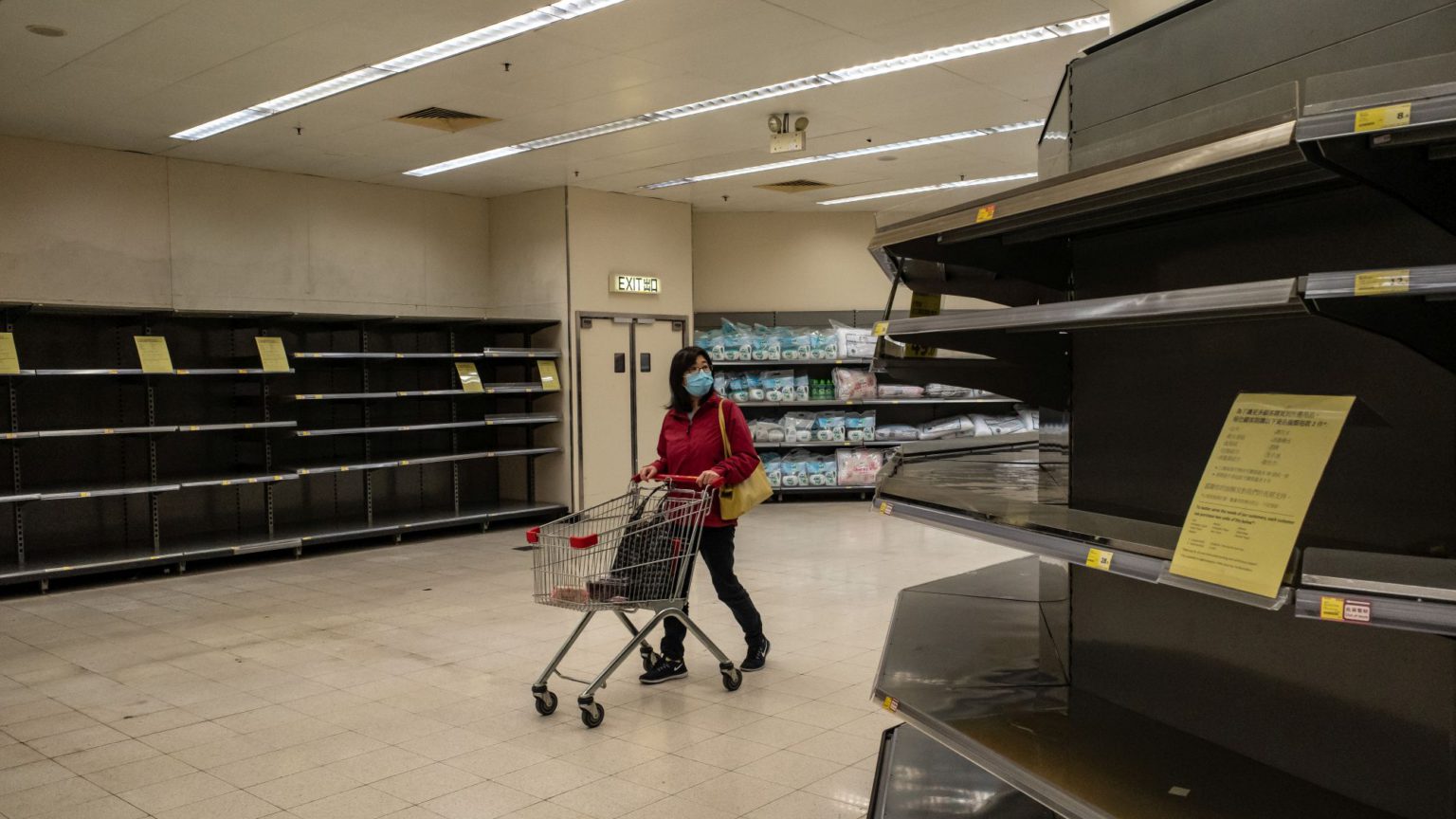 The luxury of apocalypticism

The elites want us to panic about Covid-19 – we must absolutely refuse to do so.

People’s refusal to panic has been a great source of frustration for the establishment in recent years. ‘The planet is burning’, they lie, in relation to climate change, and yet we do not weep or wail or even pay very much attention. ‘I want you to panic’, instructs the newest mouthpiece of green apocalypticism, Greta Thunberg, and yet most of us refuse to do so. A No Deal Brexit would unleash economic mayhem, racist pogroms and even a pandemic of super-gonorrhoea, they squealed, incessantly, like millenarian preachers balking at the imminent arrival of the lightning bolt of final judgement, and yet we didn’t flinch. We went to work. We went home. We still supported Brexit.

Our skittish elites have been so baffled, infuriated in fact, by our calm response to their hysterical warnings that they have invented pathologies to explain our unacceptable behaviour. The therapeutic language of ‘denialism’ is used to explain the masses’ refusal to fret over climate change. Environmentalists write articles on ‘the psychology of climate-change denial’, on ‘the self-deception and mass denial’ coursing through this society that refuses to flatter or engage with the hysteria of the eco-elites. Likewise, the refusal of voters to succumb to the dire, hollow warnings of the ferociously anti-Brexit wing of the establishment was interpreted by self-styled experts as a psychological disorder. ‘[This is] people taking action for essentially psychological reasons, irrespective of the economic cost’, said one professor.

How curious. In the past it was hysteria that was seen as a malady of the mind. Now it is the reluctance to kowtow to hysteria, the preference for calm discussion over panic and dread, that is treated as a malady. Today, it is those who prefer reason over rashness, whether on climate change or Brexit, who are judged to be disordered. According to the new elites, their apocalypticism is normal, while our calm democratic commitment to a political project, such as Brexit, or our desire to treat pollution as a practical problem rather than as a swirling, cloudy hint of nature’s coming fury with man’s hubris and destructiveness, is mad, deranged, in need of treatment. Their End Times nervousness is good; our faith in moral reason is bad.

This strange, fascinating tension between the apocalypticism of the intellectual and cultural elites and the scepticism of ordinary people is coming into play in the Covid-19 crisis. Of course, Covid-19 is very different to both No Deal Brexit and climate change. It is a serious medical and social crisis. In contrast, the idea that leaving the EU without a deal would be the greatest crisis to befall Britain since the Luftwaffe dropped its deadly cargo on us was nothing more than political propaganda invented from pure cloth. And the notion that climate change is an End Times event, rather than a practical problem that can be solved with tech, especially the rollout of nuclear power, is little more than the prejudice of Malthusian elites who view the very project of modernity as an intemperate expression of speciesist supremacy by mankind.

Covid-19, on the other hand, is a real and pressing crisis. It poses a profound challenge to humankind. It requires seriousness and action to limit the number of deaths and to mitigate the economic and social costs of both the disease itself and of our strategies for dealing with it. But what ties Covid-19 to the other fashionable apocalypses of our nervous elites, including the green apocalypse and the Brexit apocalypse, is the interpretation of it through the language and ideology of the elites’ pre-existing dread, their pre-existing cultural skittishness and moral disarray. Predictably, and depressingly, Covid-19 has been folded into their narrative of horror, into their permanent state of cultural distress, and this is making the task of facing it down even harder.

The media are at the forefront of stirring up apocalyptic dread over Covid-19. In Europe, there is also a performative apocalypticism in some of the more extreme clampdowns on everyday life and social engagement by the political authorities, in particular in Italy, Spain and France. Many governments seem to be driven less by a reasoned, evidence-fuelled strategy of limiting both the spread of the disease and the disorganisation of economic life, than by an urge to be seen to be taking action. They seem motivated more by an instinct to perform the role of worriers about apocalypse, for the benefit of the dread-ridden cultural elites, rather than by the responsibility to behave as true moral leaders who might galvanise the public in a collective mission against illness and a concerted effort to protect economic life.

A key problem with this performative apocalypticism is that it fails to think through the consequences of its actions. So obsessed are today’s fashionable doom-predictors with offsetting what they see as the horrendous consequences of human behaviour – whether it’s our polluting activities or our wrong-headed voting habits – that they fail to factor in the consequences of their own agenda of fear. Greens rarely think about the devastating consequences of their anti-growth agenda on under-developed parts of the world. The Remainer elite seemed utterly impervious to warnings that their irrational contempt for the Leave vote threatened the standing of democracy itself. And likewise, the performative warriors against Covid-19 seem far too cavalier about the longer-term economic, social and political consequences of what they are doing.

First, there is the potential health consequences. Is suppression of the disease really better than mitigation? The suppression of disease preferred by China, in very authoritarian terms, or by Italy and France, in less authoritarian terms, may look successful in the short term, but the possibility of the disease’s return, in an even more virulent form, is very real. Likewise, entire economies of everyday life have been devastated already by the severity of government action in Europe. Hundreds of thousands of people in Italy and Ireland have lost their jobs already, in the night-time, hotel and entertainment sectors in particular. That is a social and health cost, too: job loss can lead to the loss of one’s home, the breakdown of one’s marriage, and to a palpable and destructive feeling of social expediency. As to keeping elderly people indoors for months on end, as is now being proposed in the UK, it is perfectly legitimate to ask whether this poses an even greater threat to our older citizens’ sense of personal and social wellbeing than their taking their chances with a disease that is not a death sentence for older people (though it impacts on them harder than it does on the young).

The point is, there is such a thing as doing too little and also such a thing as doing too much. Doing too little against Covid-19 would be perverse and nihilistic. Society ought to devote a huge amount of resources, even if they must be commandeered from the private sector, to the protection of human life. But doing too much, or acting under the pressure to act rather than under the aim of coherently fighting disease and protecting people’s livelihoods, is potentially destructive, too. People need jobs, security, meaning, connection. They need a sense of worth, a sense of social solidarity, a sense of belonging. To threaten those things as part of a performative ‘war’ against what ought to be treated as a health challenge rather than as an End Times event would be self-defeating and utterly antithetical to the broader aim of protecting our societies from this novel new threat. To decimate the stuff of human life in the name of saving human life is a questionable moral approach.

That the practical challenge posed by this new sickness has been collapsed into the elites’ pre-existing culture of misanthropic dread is clear from some of the commentary on Covid-19. The language of ‘war’ gives Covid-19 a sentience it of course does not deserve, accentuating the idea that this is not just an illness but a fin-de-siècle menace. This illness is being interpreted as a warning. It has been speedily refashioned as a metaphor for our weakness in the face of nature. It ‘has come to tell us that we are not the kings of the world’, says one headline. This malady is blowback for ‘our foolishness, our rapacity’, says Fintan O’Toole. We must now ‘learn the humility of survivors’, he says, cynically using this crisis to seek to diminish the presumed specialness of humankind. ‘Coronavirus is an indictment of our way of life’, says a headline in the Washington Post, echoing the way that natural phenomena are constantly weaponised by apocalyptic greens to serve as judgements against the temerity of the modernising human race.

Here, we cut to the heart of the apocalyptic mindset of the modern elites. Their dread over natural calamities or novel new illnesses is not driven by the actual facts about these things, far less by the desire to overcome them through the deployment of human expertise and scientific discovery. Rather, it speaks to their pre-existing moral disorientation, their deep loss of faith in the human project itself. It is their downbeat cultural convictions that draws them to apocalypticism as surely as a light draws in moths. In her essay on the AIDS panic of the late 1980s, when that sexually transmitted disease was likewise imagined as a portent of civiliational doom, Susan Sontag talked about the West’s widespread ‘sense of cultural distress or failure’ that leads it to search incessantly for an ‘apocalyptic scenario’ and for ‘fantasies of doom’. There is a ‘striking readiness of so many to envisage the most far-reaching of catastrophes’, she wrote. It wasn’t so much ‘Apocalypse Now’, said Sontag, as ‘Apocalypse From Now On’.

How perspicacious that was. From AIDS to climate change, from swine flu to Covid-19, it has been one apocalyptic scenario after another. The irony is that the elites who readily envisage catastrophe think they are showing how seriously they take genuine social and medical challenges, such as Covid-19. In truth, they demonstrate the opposite. They confirm that they have absolved themselves of the reason and focus required for confronting threats to our society. It isn’t their apocalypticism that captures the human urge to solve genuine problems – it is our anti-apocalypticism, our calmness, our insistence that resources and attention be devoted to genuine challenges without disrupting people’s lives or the economic health of our societies.

‘I want you to panic’, they say. But we don’t. And we shouldn’t. Apocalypticism is a luxury of the new elites for whom crises are often little more than opportunities for the expression of their decadent disdain for modern society. To the rest of us, apocalypticism is a profound problem. It threatens to spread fear in our communities, it causes us to lose our jobs, it mitigates against economic growth, and it harms democracy itself. Resisting the apocalypticism of the comfortable doom-mongers who rule over us is unquestionably the first step to challenging Covid-19 and preserving society for the decades after this illness has wreaked its disgraceful impact.