Cameron is wrong to apologise for democracy

The former PM regrets giving the plebs a voice and upsetting the Remoaner elite. 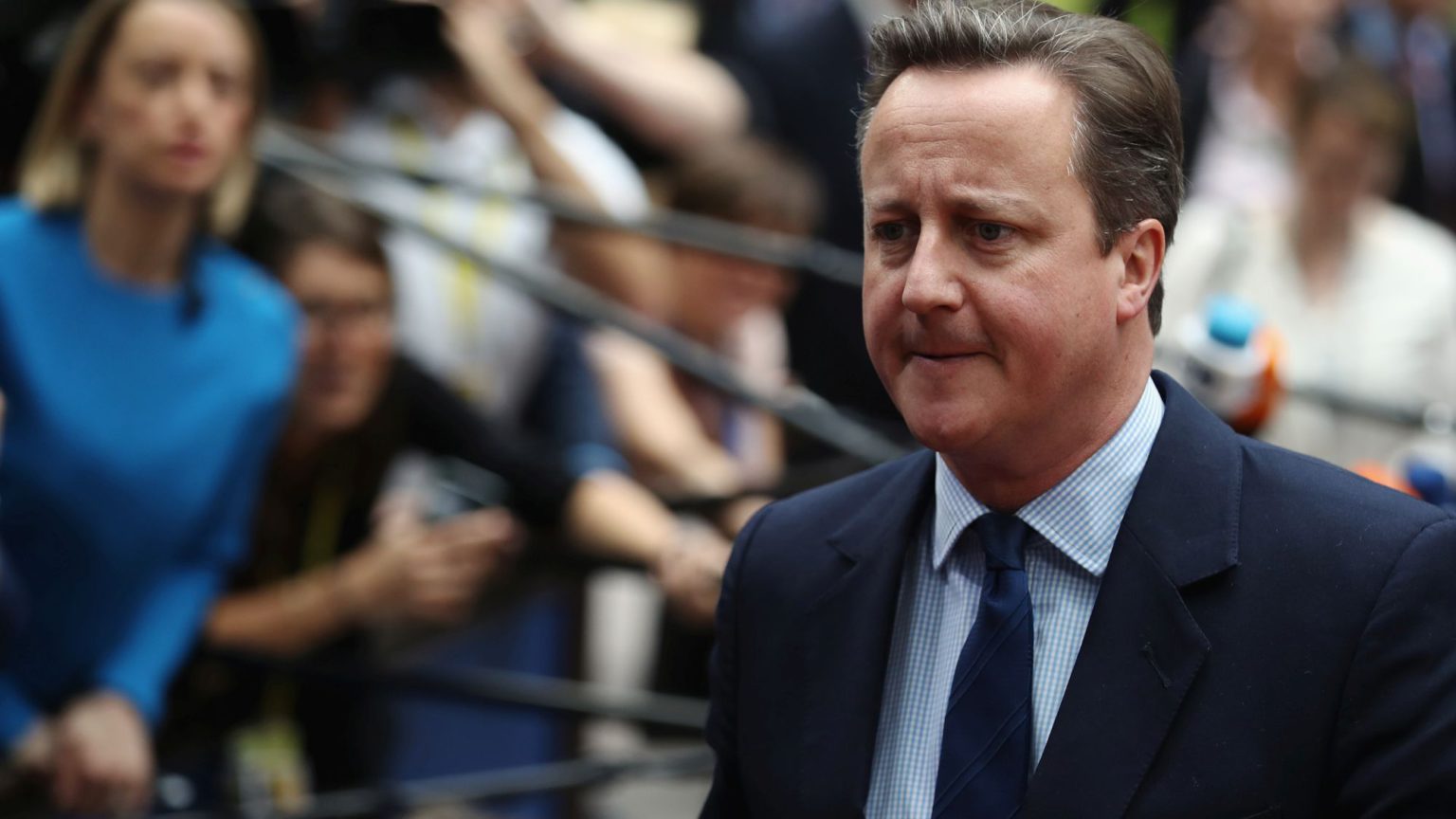 Former Conservative prime minister David Cameron is promoting his memoirs, For the Record. Central to the coverage is what caused his hasty departure from politics: Brexit. For the past three years, furious Remainers have blamed Cameron for agreeing to hold the referendum and for failing to win it. He has responded to Remainers’ tears and tantrums by saying: ‘I’m sorry, I failed.’ He told The Times that Leave’s victory has left him ‘hugely depressed’ and that he has ‘many regrets’ about the vote.

Cameron qualifies his apology by saying that allowing ‘people the chance to have their say’ on the EU was ‘the right approach to take’. But if holding the referendum was the correct decision, surely he would celebrate it as an act of mass democracy in action, even if he was on the losing side?

Then again, Cameron may not be so enthusiastic about democracy. In office, he brought in the Fixed Terms Parliament Act, enabling what should have been a short-term coalition government to have a five-year stretch in power. His behaviour after the referendum also showed a lack of enthusiasm for democratic mandates. The official leaflet on the EU referendum declared that ‘the government will implement what you decide’. But rather than accepting that decision and invoking Article 50, Cameron immediately resigned as prime minister and went back to his box sets.

Barely a few months later, he stood down as the constituency MP for Witney – a huge snub to his own Conservative Party members and voters in Oxfordshire. This is less commented on than his quick resignation as PM, but it should be viewed as equally damming. For all Cameron’s claims of ‘loving this country’ when he resigned, he clearly couldn’t stomach having to deal with mere constituency matters. It was beneath him. Just as when Labour’s Tristram Hunt and Tory ex-Chancellor George Osborne resigned their seats to take up cushy jobs elsewhere, it showed that the well-heeled and well-connected deemed the House of Commons to be a bit too common.

Cameron’s actions revealed a politician who didn’t particularly like politics and who was not inclined to public service. He now returns to public life to rubbish a democratic referendum and scorn the debate it has provoked. Cameron feels comfortable in articulating this because the anti-demos narrative that has gripped the hysterical middle classes has become the dominant ideological view. Leave may have won the referendum, but elite Remainers have shaped the aftermath. They have been highly effective in demonising the Leave vote, labelling it as an act of deviance and even criminality. Part of this narrative has been to attack democracy more broadly. The elite’s turn against democracy has brought reactionaries on to the streets and has emboldened the powerful in high places. Hedge-fund millionaires posing as activists, unelected judges and a biased Commons speaker are all riding this destructive wave.

In his Times interview, Cameron says he ‘did not fully anticipate the strength of feeling that would be unleashed both during the referendum and afterwards’. Indeed, who could have guessed that the decision to quit a painfully dull and bureaucratic trading bloc could unleash so much emotion and anguish? Then again, the middle-class anger about Brexit is not directly about membership of the European Union. Rather, it expresses a class hatred. For shockingly naive Remoaners, the EU is a facilitator of brotherly love, transnational cooperation and toleration. It’s about breaking down barriers between nations. In Remainers’ minds, it is a sign of cosmopolitanism, open-mindedness and continental sophistication. In contrast, Brexit supporters are viewed as horrible, smalltown types. They are seen as tabloid-reading, ITV-watching, fast-food-guzzling throwbacks – plebs and pensioners, rooted in deeply uncool British cultural mores. Middle-class Remainers are outraged that ‘these people’ and their vile views and habits won the referendum. When Cameron says he is ‘sorry’, he is apologising to the middle classes for allowing uneducated oiks to run riot at the ballot box.

Of course, Cameron isn’t alone in desperately trying to appease middle-class reactionaries. Jeremy Corbyn and the outer fringes of the radical left are doing the same. When Corbyn won the leadership of the Labour Party four years ago, many commentators feared that the party of Tony Blair had been captured by ‘hard left’ activists. In fact, it has transpired that the ageing Stalinists and ex-SWP radicals attracted to Corbyn’s Labour were the ones who were captured. They were captured by the woke middle classes. The slogans ‘Love Corbyn, Hate Brexit’ and ‘Love Socialism, Hate Brexit’ have been adopted by left-wing millennials. Eurosceptic socialists like Corbyn and his strategist, Seumas Milne, are demonstrably not in charge. Left-leaning commentators have also changed their tune, from penning articles considering the case for ‘Lexit’ (a left-wing exit from the European Union) to arguing that only racists want Brexit. Everyone is terrified of upsetting middle-class Remainiacs, it seems.

The Labour left’s awkward about-turn and capitulation to the middle classes has led them to double down on their screeching ‘anti-Tory’ pantomimes outside parliament. This is nothing but a performance. No amount of megaphone chanting can disguise how, when it comes to the question of the democratic involvement of ordinary people, they are defending the status quo. Cameron’s apology is directed at them, too. He knows just how they feel.