A protest against the people

The ‘Stop the Coup’ movement is a middle-class revolt against the masses. 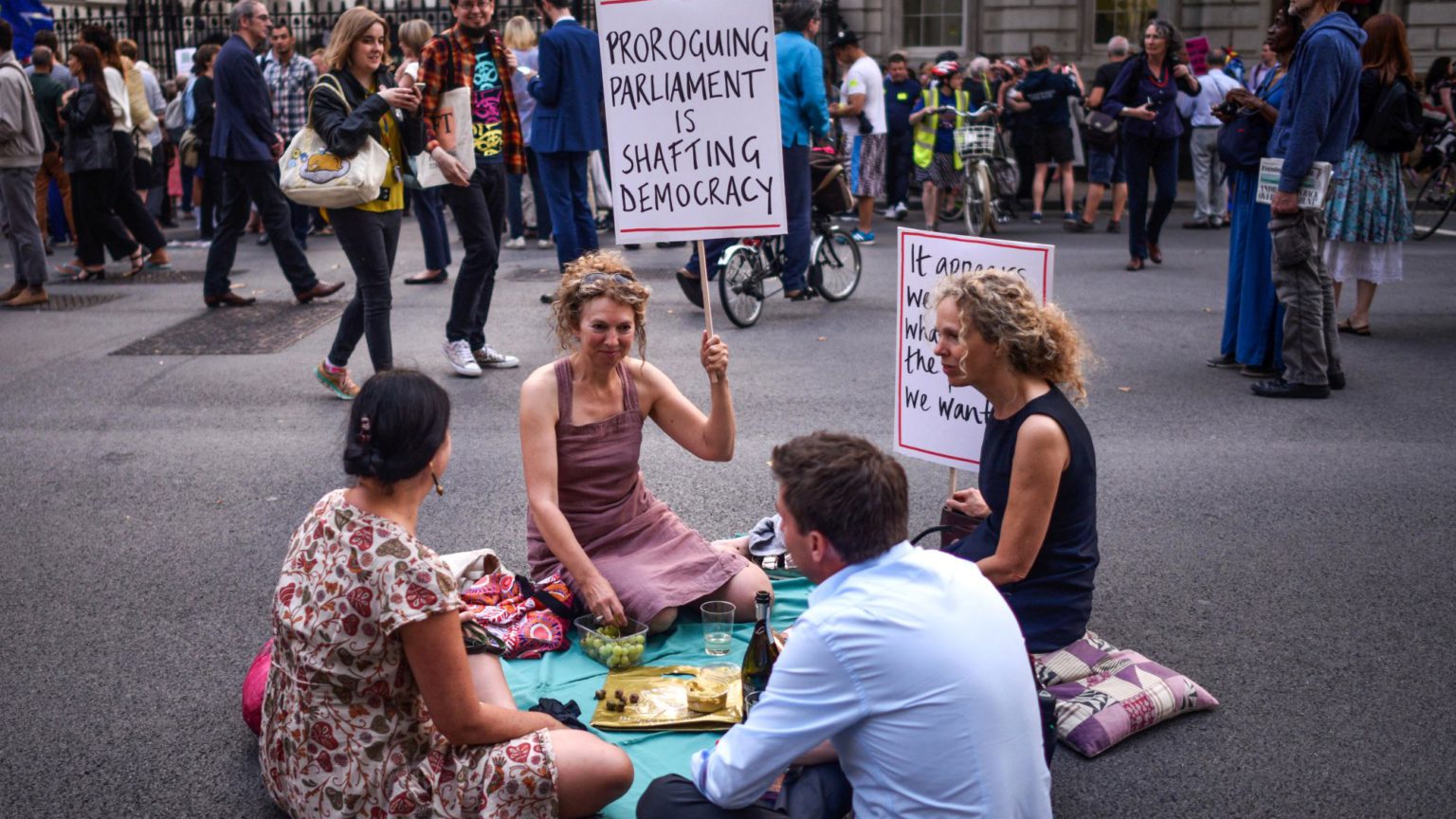 Political language, said George Orwell, is ‘designed to make lies sound truthful and murder respectable’. We might now add that it is also designed to make assaults on democracy appear democratic; to make the warriors against the democratic will seem like defenders of the democratic ideal. This is what we saw on the streets of London and other cities across the UK at the weekend and it was a genuinely extraordinary sight: large groups of mostly middle-class people agitating for the destruction of the largest act of democracy in British history under the banner of defending democracy. The dizzy heights of Orwellianism have been well and truly reached.

It is time to get real about the so-called ‘Stop the Coup’ demos that have taken place in recent days, in which Remainers have flooded into the streets to rage against Boris Johnson’s suspension of parliament for a few more days than is normal. These are not pro-democracy gatherings. They are the precise opposite. They are a continuation of the political elite’s well-oiled, well-funded and unforgiving three-year war against the people’s will. This was apparent at every turn in the largest of the ‘Stop the Coup’ protests, the one in London on Saturday. EU flags fluttered everywhere. ‘Bollocks to Brexit’ was emblazoned on stickers, t-shirts, placards, hats. Making things even clearer, the rallying cry of ‘Stop Brexit’ was widespread. ‘Defend democracy… Stop Brexit’, protesters demanded.

These demonstrations are not concerned with stopping Boris from proroguing parliament – they are concerned with stopping the enactment of the largest democratic vote in history. The duplicity is breathtaking, even by the standards of today’s increasingly illiberal and authoritarian political and chattering classes. Protesters likened themselves to the Suffragettes. One of the speakers – Guardian columnist Owen Jones – said they were standing up for the great gains made by ‘our ancestors’ in their long, bloody struggle for democracy. Such staggering dishonesty. This is nothing short of a lie. These gatherings are not about defending the democratic rights won by our forebears; they’re about destroying them.

The demand is for the overthrow of the votes of the 17.4million people who want to leave the EU. When these people say ‘Stop Brexit’, they are saying ‘Stop those people from getting their way; stop their votes from having any impact; stop them from ignorantly interfering in political affairs’. This was a protest against the franchise itself, because if the votes of millions of people in one of the most important democratic exercises in our nation’s history are made null and void – as they would be if these middle-class marchers got their way and there was a second referendum – then the right to vote becomes meaningless. The vote becomes meaningless. The thing ‘our ancestors’ won for us – the vote – would be reduced to dust. There is something sick-making in the sight of Remainers comparing themselves to the Suffragettes and the Chartists as they agitate for the crushing of the votes of eight million women and millions of working-class men. The people whose democratic rights were won through hard struggle would be silenced and disenfranchised by this middle-class mob.

The intentions of the anti-Boris brigade are obvious. Just look at the petition that 1.7million of them have signed. It says: ‘Parliament must not be prorogued or dissolved unless and until the Article 50 period has been sufficiently extended or the UK’s intention to withdraw from the EU has been cancelled.’ (My emphasis.) Got that? Their overarching aim is to disenfranchise the voters of 2016. They are deniers of democracy, not defenders of it.

In a way, none of this is surprising. The business, political and cultural elites have been working hard for three years to try to dilute or thwart the vote for Brexit. Their opposition to proroguing is entirely in keeping with this, since its aim is to continue providing the members in the Remainer Parliament with the platform and the power to stymie the vote for Brexit. What these marchers are really saying is, ‘Boris’s proroguing of parliament is a disgraceful attack on democracy because it hampers the ability of MPs to continue attacking democracy’ – such is the moral contortionism of these pretend defenders of democracy. What is new is that the alliance against the people’s will is growing. It now includes Corbynistas alongside the Financial Times, middle-class leftists alongside old Tory patricians like Michael Heseltine, lifelong anti-Blairites alongside Blairites. They’re getting their act together.

And yet while the deceptive, dishonest ‘Stop the Coup’ marches are not surprising, they are deeply concerning. Language matters. Ideas matter. Democracy matters. We cannot allow people to distort the meaning of the word democracy so shamelessly and so thoroughly. We cannot allow the agitators against democracy to claim the mantle of democracy. Democracy is far too important to become the twisted plaything of the disgruntled urban elites.

Watching the ‘Stop the Coup’ protest in London and its phoney claims of being the latest manifestation of the historic struggle for democracy, I was reminded of how much this city has toiled for basic democratic rights. From St Mary’s Church in Putney, where the Levellers and others met in 1647 to discuss voting rights, to Kennington Common, where the Chartists gathered in their tens of thousands in 1848 to demand votes for working-class men, to the area outside parliament itself where Suffragettes were battered by police on Black Friday in 1910, this city hums with the history of people’s bloody fight for the vote. People wanted the vote because they wanted to impact on society, on constitutional matters, on the future itself. The ‘Stop the Coup’ lobby is not a movement to defend the vote – it is a movement against the votes of millions of people. It stands in stark opposition to all the great democratic struggles witnessed in London and across the United Kingdom over the centuries.

In a sense, ‘Stop the Coup’ isn’t a protest at all. It is a loud, colourful performance of the political establishment’s own thinking, of the key ruling-class ideology of our time: contempt for Brexit and contempt for voters. If these people are protesting against anything, it isn’t the powers-that-be – it’s us, the people, and the apparently disastrous fact that we won the right to have a say in political affairs.