Blaming data companies for Trump and Brexit is a copout. 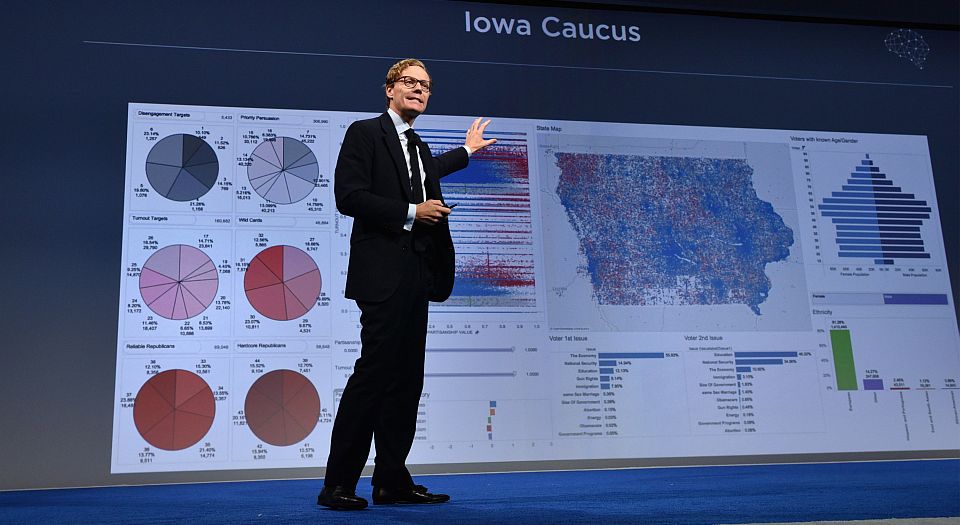 So let’s get this straight: when Barack Obama collected and used voter data in his successful election campaigns, he was proving what a modern, rational politician he is. When the UK’s Labour Party used the same software (and some of the same campaign strategists) in the 2015 UK General Election, it was bringing politics into the 21st century. But when Donald Trump uses the same tools and strategies, it’s a sinister secret plot to take power using brainwashing techniques based on stealing our souls through social media?

Revelations that Trump and also Leave campaigners in the UK used data-modelling companies such as Cambridge Analytica to reach voters have set off a storm of controversy. There is talk of data overloads swaying entire elections. ‘Did Cambridge Analytica influence the Brexit vote and the US election?’, asks the Observer.

Of course companies like Cambridge Analytica want you to believe their software can unlock the secret desires of millions of people, so you can bend them to your will. That’s their business model, promising you what they’ve called their ‘secret sauce’ that will give you the edge over political opponents or commercial rivals.

Their methods are typical Big Data techniques. First, collect information on individuals from different sources, and then combine it to learn more than you could from any one source alone. For example, their Twitter account, their shopping habits and where they live.

All of these are readily available because we voluntarily sign up to various lists, giving our email address in return for free wifi or other benefits. Whatever information we give up without reading the terms and conditions may then be sold on by data brokers.

None of this is very different from the way companies try to sell you their products. Online advertising is not just targeted, using what is known about you, but also tested on you for effectiveness. Even the UK government’s Behavioural Insights Team tested eight different online messages designed to ‘nudge’ people to register as willing organ donors. They measured which one resulted in the most new registrations, and that’s the one you’ll read when you tax your vehicle online.

On one level, using Big Data to target persuadable voters is nothing more than a change of medium. Politicians have always sought to win enough voters to their side, and since democracy came to mean mass suffrage, that means winning over masses of ordinary voters like you and me. In the past, they might have used posters, radio or TV campaigns, public meetings or door-to-door canvassing. Now it’s social media.

Turning to new technology reflects, in great part, the loss of these other channels of communication. The era of mass membership of political parties has passed, along with other forums for politicians to engage with us in active debate. How else can they find out what we care about, what gets us angry, inspired or afraid, except by what we tweet, like or share on the internet? How else can they seek to win us to their party or their cause, except through social media?

The problem lies, not in the medium, but in the content of the messages.

Seeing politics as a marketing exercise predates new technologies. Focus groups and surveys have been used to shape the campaigns, and even the policies, of major political parties for many years. Without strong ideas to distinguish them from their rivals, all parties rely more and more on finding out what preys on the minds of potential voters, and then reflecting those preoccupations, hopes and fears back to us in the most persuasive form.

Profiling the electorate drives this reduction of politics to ‘whatever jerks your chain’ still further. Instead of finding policies which address the shared concerns of large sections of the population, you may be able to win elections by identifying the hot issues of several distinct subsections, and tailoring campaigns to them specifically. To working-class voters in stagnating regions you can promise ‘British jobs for British workers’, while bigging up your anti-racist credentials for the cosmopolitan urbanites.

The deep underlying problem here is not the technology that helps campaigners guess which messages will most effectively drive people to turn up and vote for them. The worst aspect of the data-driven campaigns is that they see us not as reasonable voters who may be convinced by a stronger argument, but as participants in a behavioural experiment.

Just as the Behavioural Insights Team started with a few familiar psychological principles, and then counted the click-throughs on each variant of the donor-registration appeal, so data-based election campaigns can test which adverts and appeals generate the correct response. It’s a stimulus-response model, concerned less with underlying motivations than with outcomes.

Again, this loss of belief in the voter as a fundamentally rational person, capable of harnessing both passion and reason when deciding how to vote, precedes the technology. Once you lose faith in being able to win masses of voters to your ideas through argument, using technology to find the most effective stimulus for the desired response is an inviting solution.

This is why the idea that data-driven, targeted advertising won the election for Trump, and the referendum for Leave, is more than an eccentric conspiracy theory. It is the mirror image of the thing it most fears. Only an electorate incapable of rational thought, impervious to common sense, context and conflicting arguments, could be swayed against their will by online adverts, however well-aimed.

Such a view begs the question: why is this nightmare vision more inviting to so many than the alternative scenario – that the electorate were simply not convinced by the arguments for Hillary Clinton, or for Remain?

On some level, perhaps it is easier to blame defeat on a conspiracy of right-wing funders and mysteriously powerful technology, than to accept that convincing others to share your ideas is harder work than you realised.