Jess Phillips is not my hero

The Labour MP is nothing to write home about. 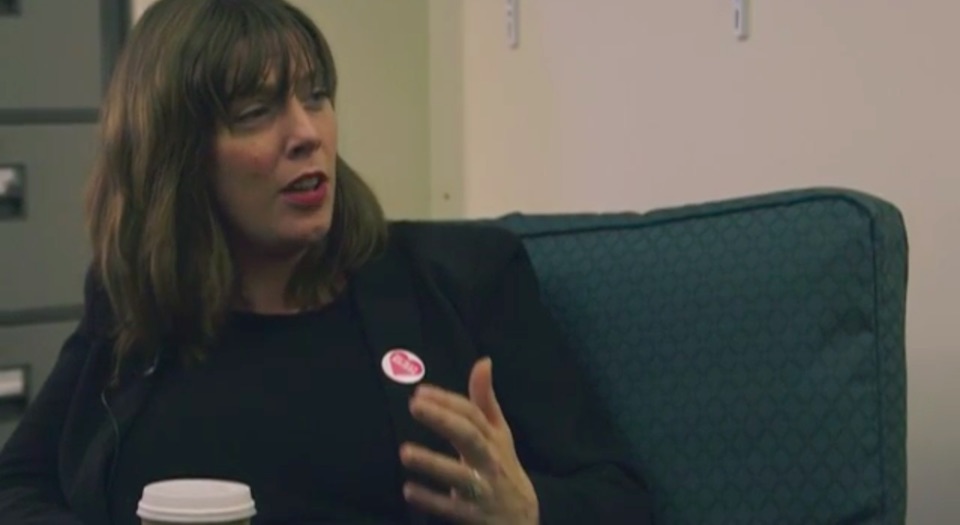 There is a new brat-pack of MPs in parliament. They pride themselves on using Twitter like teenagers – posting selfies and sarcastic bitchy asides. They feature frequently in the Independent and the Guardian, bravely speaking out about tampons, Page 3 and global warming. They are young, hip and all about breaking down the barriers between stuffy Westminster and the ever-mysterious public.

At the head of this new generation of ‘cool’ politicians is Jess Phillips, the Labour MP for Birmingham Yardley. Since starting her career in parliament in May, Phillips has worked up a reputation for being an outspoken backbencher and rebel MP. But the real reason Phillips frequently makes the news is that she’s partial to attention-seeking stunts. In September, she boasted about telling Diane Abbott to ‘fuck off’; in October, she was filmed laughing at the idea of International Men’s Day; and, most recently, she’s made headlines for threatening to stab Labour leader Jeremy Corbyn in the front (metaphorically, she hastens to add).

You’d be forgiven for thinking Phillips had a promising career in reality TV, rather than parliamentary politics. But this ‘authentic’ Brummie has been lauded by many as a breath of fresh air and a sign that a new type of politics is on the horizon. Julie Burchill, who tips Phillips as a future Labour leader, has described the 34-year-old MP as an ‘overgrown schoolgirl’ and a ‘Mrs Pankhurst meets Tigger in Topshop’. She’s like a naughty teenager and the liberal press love her. But plaudits like this are unintentionally accurate. Because if we put aside the hair-flicking, the sarky tweeting and the gobby Brummie schtick for a moment and attempt to get to grips with what Phillips stands for politically, the new kid on the block comes up very short.

Phillips’ main bugbear is gender equality in parliament. Her swearing match with Diane Abbott was in response to the four top jobs in Corbyn’s team going to men. Following the incident, Phillips told the Guardian, ‘there’s something wrong with the Labour Party… you have to be a remarkable and amazing woman to rise to the top’. Phillips was not the only one whining about representation in the shadow cabinet when Corbyn was elected. She was joined by many other mediocre politicians, including Yvette Cooper and Stella Creasy, who similarly thought it was unfair that more less-than-remarkable women weren’t chosen in the spirit of equality.

On the one hand, Phillips is continuously arguing that women can do the things men can while standing on their heads. Writing after her snub of International Men’s Day, she assured her critics of her support for both male and female issues: ‘I’m a woman, I can multitask.’ But, on the other hand, Phillips seems hell-bent on making out that women are in desperate need of a leg-up: ‘Being a man is its own reward. You hit the jackpot when you are born a boy child.’ She is torn between her desire to pass as a working-class, no-shit, strong woman, and her attraction to the feminist politics of equal opportunities and 50/50 representation. What she doesn’t realise is that the working-class women out there, who she believes she speaks for, don’t need half the room in parliament to be wearing skirts in order to feel like they can succeed in life. Watching Phillips continuously make the headlines for idiotic comments, however, could be enough to put some of us off.

Despite her reputation as a straight-talking MP, Phillips is also completely lacking in political principle and party loyalty. In a recent interview, she talked about her frequent screaming matches with Corbyn, and how she’d happily depose him if he threatened the party’s electoral chances: ‘The day that… you are hurting us more than you are helping us, I won’t knife you in the back, I’ll knife you in the front.’ What happened to the love for the Corbyn she expressed less than a month earlier? ‘[Corbyn] is a bit like my mum’, she said. ‘Slightly posher, and beardier, but soft and kind in the same way. Dedicated and hardworking in the same way. Thoughtful and analytical in the same way.’ What’s more, while Phillips voted against bombing Syria, and has previously claimed that she despises violence, she responded to Corbyn’s gaffe in the wake of the Paris attacks, where he questioned ‘shoot-to-kill’, by playing up the supposed bloodlust of her constituents. Brummies, she said, ‘wanted to hear, just after Paris, that basically if a man walks down your street with a big gun and he’s going to kill you and he’s got a bomb strapped to him, we will shoot him in the head, immediately, 10 times’.

This supposed woman of the people, this straight-talking mother of two, is, quite frankly, politically inept. Her views on women are reactionary, arguing that we need a leg-up and a helping hand in order to get anywhere in the world. But her most unattractive quality is her inability to stick to her guns. The minute she says something a bit off-colour, like her supposed snub of the significance of male suicide rates, she floods her Twitter feed with brown-nosed apologies. After the International Men’s Day debacle, Phillips seemed to, on the one hand, admit that men’s issues were important, while at the same time mocking men’s rights activists. What’s more, she trawled the internet for nasty things people had said about her, retweeting the alleged ‘threats’, only to insist that ‘It doesn’t make me feel scared… at all’. This cowardly flipflopping reveals that Jess Phillips can’t work out what she stands for. Is she pro-war or just anti-pissing people off? Is she a powerful woman or a victim of patriarchy? Does she like Corbyn or has she got metaphorically murderous intentions? In other words, does this woman stand for anything?

Be wary of the politician who blows with the wind, goes with the flow and occasionally makes the odd rude remark. Never trust somebody who gains credit for claiming to ‘speak for the people’ but spends all her time talking about herself. All of Phillips’ headline-grabbing and attention-seeking comments are cringe-worthy because there is no substance to them – nothing progressive to rally behind or new to celebrate. Sure, she doesn’t like the Tories, but that’s a basic requirement for all Labour politicians. Though she would like to claim otherwise, Phillips is just a younger, ruder version of the same-old boring Labour – pathetic in the face of criticism and totally lacking in ideas. In the end, the only reason Phillips is being celebrated is because she’s a mouthy woman. It’s as if the entire political class is just bowled over by a woman speaking her mind, despite the fact she’s making no sense. For all Phillips’ talk about male privilege, it’s her biology, not her brains, that everyone is interested in.