The SNP’s war on the people

Nicola Sturgeon’s party isn’t an alternative to snobby Westminster politics – it’s a tyrannical extension of it. 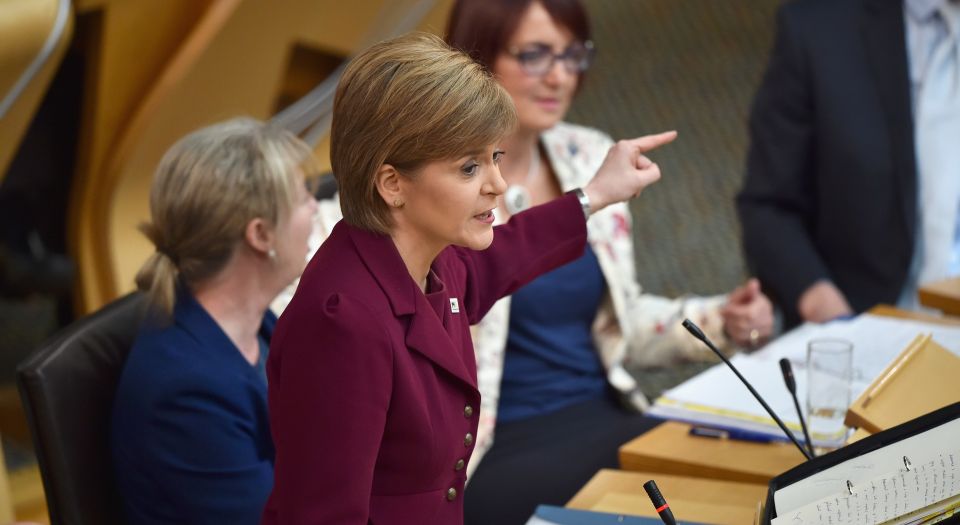 Last week, a video emerged online showing a group of teenage boys having their anti-state-censorship banner confiscated by the police. Where was it filmed? Putin’s Russia? Whichever Middle Eastern country Amnesty International is banging on about this week? Nope. It was filmed in Scotland. Modern, enlightened, ‘progressive’ Scotland, where the police and the government have developed a maniacal obsession with suppressing speech in and around football grounds. As these boys found out, even protesting this state censorship has become a risky business.

The teenage boys in question, only one of whom was over 17, were part of a protest outside the Hamilton vs Celtic match last Sunday. Organised by Fans Against Criminalisation (FAC), an anti-censorship association of pissed-off, mostly Celtic-supporting fans, the protest was against the repressive Offensive Behaviour at Football and Threatening Communications Act. Passed by the ruling Scottish National Party in 2012, it allows fans to be arrested for any behaviour or speech deemed by the ever-wise officers of Police Scotland to be ‘threatening’, to ‘express hatred of a social or cultural group with a perceived religious affiliation’ (code for the fanbases of Celtic and Rangers, who hail from traditionally Catholic and Protestant areas of Glasgow respectively) and, naturally, any other behaviour ‘that a reasonable person would be likely to consider offensive’ (the ‘reasonable person’ presumably being whichever Police Scotland officer happens to be within earshot). And so it was that, overnight, Scottish judges were given the green light to punish the beer-fuelled, oh-so-uncouth bellowing of Scottish football fans, in particular supporters of Celtic and Rangers, whose traditional chants are notorious for their ostensibly sectarian intent.

The act was passed off the back of a moral panic about sectarianism in Scottish football. The Scottish elite, staring with horror at the tribalism of the Old Firm rivalry, had a collective flashback to the 1970s and cried Something Must Be Done – despite the fact that real, full-on, frothy-mouthed sectarianism in Scotland was at an all-time low. One recent survey found that, despite the traditional back-and-forth of pro-Union and pro-IRA songs on match day, only one per cent of Glaswegians today have had any serious experience of sectarianism. It really is just banter. Yet hundreds have fallen foul of the law. Eighty-seven fans were convicted in its first year alone. Earlier this year, Scott Lamont, a Rangers fan, was jailed for four months for singing ‘The Billy Boys’, an old loyalist sectarian favourite, on his way to the ground. This dreadful act of censorship was not the product of a genuine, grassroots clamour for a crackdown on bigotry, but rather was fuelled by the prejudices of the sniffy Scottish political set, which has a palpable fear and incomprehension of the lowly football fan.

What’s so remarkable about last Sunday’s act of state censorship is that the banner had no sectarian or offensive content at all. It read: ‘SNPolice Scotland. FoCUS on your Failings Not on Football.’ It was a nothing more than a nod to the SNP’s politicisation of Police Scotland, and a reminder that football fans are not, by default, potential criminals. Perhaps this was a mortal blow to these officers’ self-esteem? The boys tried to enter the ground with the banner and, after being turned away, displayed it on railings in the nearby Morrisons car park facing the stadium. They’d even asked and gained the security guard’s permission. Yet, as is clear from the video, the police spotted the lads and assumed, instinctively, that there must be some ‘dispute’ – that is, something in need of police arbitration. Only in the context of the Scottish football ground, where fans are seen not as individuals but as an unpredictable pack of attack dogs whose passions must be reined in, could such a startlingly stupid assumption be made.

This is a new low for Police Scotland, and that really is saying something. It’d be a mistake to think that Police Scotland’s illiberal impulses are specific to football. Despite a 38 per cent drop in stop-and-search since April 2013, Scots are still stopped and searched at four times the rate of the English and Welsh. In 2014/15, the number of recorded searches on 16-year-olds in Glasgow was higher than the number of 16-year-olds living in Glasgow. In 2014, without any parliamentary debate, 440 Scottish officers were authorised to carry firearms on routine patrol. Clubbers, too, have felt the firm hand of the Scottish bobby. Last month, police showed up unannounced outside Aberdeen nightclubs with sniffer dogs and drug-test kits, knocking back clubbers who refused to cooperate and dragging off those whose swabs came back positive. Before the closure of The Arches, a Glasgow clubbing institution, Police Scotland had demanded that an officer be called out whenever the door staff confiscated drugs. This was later framed as ‘wasting police time’ and, naturally, the evidence gathered during the nightly call-outs was used to justify Glasgow City Council’s decision to rescind The Arches’ late license, ultimately forcing the iconic venue into administration.

Of course, none of this is surprising under an SNP government whose compulsion to meddle, nanny and nudge is woefully under-opposed. This is the government that is battling to bring in minimum pricing on alcohol, an illiberal measure that even EU bureaucrats aren’t sure about; that is trying to ban smoking in parks; that is planning to bully Scots into being ‘smoke-free’ by 2034; and that is pushing through a ban on GM crops. Most ominous of all, though, is the SNP’s dystopian Named Person scheme, due to come into force in 2016. This will mean that every child in Scotland will be assigned a state-approved guardian – a so-called Named Person – to look over them until the age of 18. Essentially, parents will be forced to compete with the state for ultimate parental responsibility over their own children. The legislation presupposes that the one-size-fits-all, state-dictated outcomes for children are superior to parental judgement, and if you, as a parent, dare to disagree, then, well, that’s just tough.

There are two things we should take from all of this. First, as has been pointed out before on spiked, the relative lack of power of devolved administrations – especially those which purport to represent an ’identity’, as the SNP does – stunts their capacity for real, meaningful change, pushing them towards imposing authoritarian measures in an attempt to justify their own existence. In their desperation to differentiate Scotland from the rest of the UK, to find their own, distinct voice within the British political firmament, and develop the ‘unique’ and ‘divergent’ Scottish political identity which might justify independence, the SNP has pushed through deeply illiberal policies of the kind that would have made Tony Blair’s New Labour think twice. When all that matters is independence, the means justify the ends.

The second is that, in the act of doing this, the SNP has become the Scottish version of the very thing it claims to oppose: the so-called ‘Westminster elite’. Both in Scotland and across the UK, the SNP has been billed as a punchy, people-power alternative to London’s ‘out-of-touch’ political and media set. But don’t be fooled by the Scottish accents and shouty, anti-establishment veneer. Scratch the surface, look beyond the vacuous, stick-it-to-the-man posturing, and before long you’ll see that the SNP shares the same prejudices of its supposed Westminster enemies. From its crackdowns on football banter to its health hectoring to its undermining of parental authority, the SNP is motivated by the same misanthropic fear that drives much of its Westminster opposition: fear of the beer-fuelled, profane football fan; fear of the fun-loving clubber; fear of the parent; fear, in short, of the demos.

An alternative to the Westminster elite? Yeah, right. The SNP is a tartan-cloaked extension of it – only more effective and worse-opposed. The SNP claims to believe in the Scottish people. But it’s not reflected in its record. Because, after all, what would be the best way, indeed the only way, really to show trust in the Scottish people? Simple: take your speech-policing, fun-crushing, child-snooping policies and get tae fuck.