Since 1215, the charter has kept citizens free and monarchs in check. 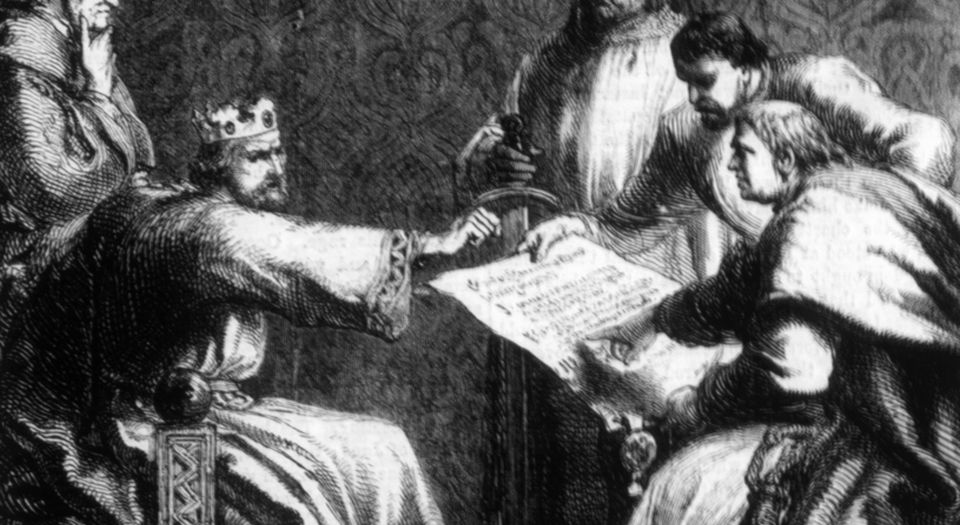 One day in June 1944, King George VI was driving back to Windsor from London in a furious mood. Winston Churchill, Britain’s powerful wartime prime minister, had just overruled him once again, frustrating the stammering king’s attempt to have a say in government. The monarch, a gentle and nervous figure who was well on his way to smoking himself to death through sheer anxiety caused by a job he didn’t want and which his useless brother Edward had forced on him, happened to pass by a spot near the Thames. As his secretary, Alan Lascelles, later recalled: ‘Suddenly he threw his arm out of the window and exclaimed, “And that’s where it all started!”.’

The place was Runnymede, and it was here that in 1215 George’s ancestor King John (also the ancestor of Churchill and the US president Franklin Roosevelt – and most likely you if you’re a native English speaker) was forced into a peace treaty with his leading barons that would have a profound impact on the country and the world. It came about over the frustrations of the barons at the misrule of the king’s family, known to us as the Plantagenets, but this Magna Carta, as it became known later in the thirteenth century, established fundamental principles about the rule of law that would spread to the English colonies and worldwide.

At the time of King George’s outburst, the descendants of those barons, ruling states on both sides of the Atlantic, were on the cusp of winning a worldwide existential war that was being fought between those who believed in the rule of law and those who didn’t. Their victory would globally implement the freedoms that we have come to think of as Anglo-Saxon, although, in the context of this story, one might better call them Anglo-Norman – created as they were by the French-speaking aristocracy of thirteenth-century England.

It was not the first time a king had made such a contract. Two centuries earlier in 1014, the hopeless Ethelred II made a similar promise after returning to the kingdom from which the Danes had previously kicked him out. He was so unpopular that his subjects were fairly ambivalent about whether they would want Ethelred back or would rather go on under the rule of the Viking pirate king Sweyn Forkbeard.

Long before Ethelred’s time, the Anglo-Saxons held witans and had some vague idea of the law being something which belonged to everyone. Although how much of this is mythmaking from the seventeenth century is a matter of debate. Runnymede may have been the site of a witan in the past, but we cannot know for sure. What happened in 1215, however, was most definitely, fundamentally different. It established not just restraints on the monarch but also the rule of law, no arrest without charge, just cause and other essential principles.

Although John went back on the agreement almost immediately, and the country fell into civil war, by the end of the century Magna Carta had been written into English law; today, 800 years later, it is considered the most important legal document in history. As the great eighteenth-century statesman William Pitt the Elder put it, Magna Carta is ‘the Bible of the English Constitution’.

Two weeks before the king’s dressing down by Churchill, the armies of the democracies had landed in Normandy, the ancestral home of the kings of England, from where they had made the reverse journey 900 years earlier. The victories of the Allies the following year would not just crush Nazism, but would also make the ideas of 1215 universal, worldwide values, even if in much of the world they would remain unenforceable and theoretical.

English-speaking ideas and armies have triumphed over the past two centuries, and the influence of Magna Carta has therefore come to grow across the world. After Britain’s victory in the Napoleonic Wars, France, envious of the successful and moderate political constitution that had defeated it, established its own charter in 1814, with the restored monarchy restrained by law. Belgium followed suit after it was established for no reason whatsoever in 1830.

However, most of Magna Carta was taken off the statute books in the nineteenth century when English law was tidied up (there had never previously been one book of laws, and lots of archaic ones had never been repealed, while others contradicted each other; it was a mess). Today, just four clauses of Magna Carta – 1, 13, 39 and 40 – remain law, and they are there for emotional reasons as much as anything – the rights within are guaranteed by subsequent laws. Clause 39, in particular, remains one of the most important sentences in history: ‘No free man is to be arrested, or imprisoned, or disseised, or outlawed, or exiled, or in any other way ruined, nor will we go against him or send against him, except by the lawful judgment of his peers or by the law of the land.’

Some might argue that it does not really mater anymore, asking what relevance Magna Carta actually has, being more suited to the thirteenth century than the 21st. After all, it largely focussed on financial disputes between a sex-crazed, drunken king and his leading barons, none of whom was that keen on what we’d call human rights. It is certainly true that much of Magna Carta’s power stems from the seventeenth century when it was used as an instrument by opponents of the Stuart monarchy; many were fairly imaginative with their history, seeing ‘rights’, not as an innovation (a dirty word to Puritans), but a return to the ancient forest democracies of the Saxons, which only really existed in people’s heads.

But a handful of clauses really have ‘stood the test of time’, as the American David Rubenstein put it after he bought Ross Perot’s copy of a 1297 Magna Carta reissue for $21.3million in order to put it on public display.

In fact, Magna Carta has been quoted in a number of legal disputes in recent years, such as in the US Supreme Court in debates about the legality of detaining people in Guantanamo Bay. It came up in a 2003 debate in the British courts over the Chagos Islanders, who had been moved from their home – their lawyer citing ‘unlawful exile’ as being contrary to the 1215 document. It was also used in a case involving native fishing rights in New Zealand.

None of this is what was intended at the time. As Winston Churchill put it, Magna Carta was ‘the foundation of principles and systems of government of which neither King John nor his nobles dreamed’. Whatever the mythmaking of seventeenth-century radicals, and the motives of the barons, the acceptance of Magna Carta by crown officials after the death of King John in 1216 was a crucial event that made the rule of law possible, and led the way to the end of arbitrary government. As the twentieth-century lawyer Lord Denning put it: ‘Magna Carta is the greatest constitutional document of all times – the foundation of the freedom of the individual against the arbitrary authority of the despot.’

Having said that, it can be argued that its primary purpose today is sentimental rather than legal, but this is still valuable in itself. In fact, as far back as 1770 there were suggestions that 15 June be made a public holiday in England, and in recent years the proposal has come up again. Magna Carta Day would be a national day based on the rule of law and constitutional patriotism – good ideas that have lasted the test of time.

So, each 15 June, raise a glass to the hopelessly incompetent alcoholic king who made it all possible.

Ed West’s 1215 and All That: A very, very short history of Magna Carta and King John is available from Amazon, priced 98p.