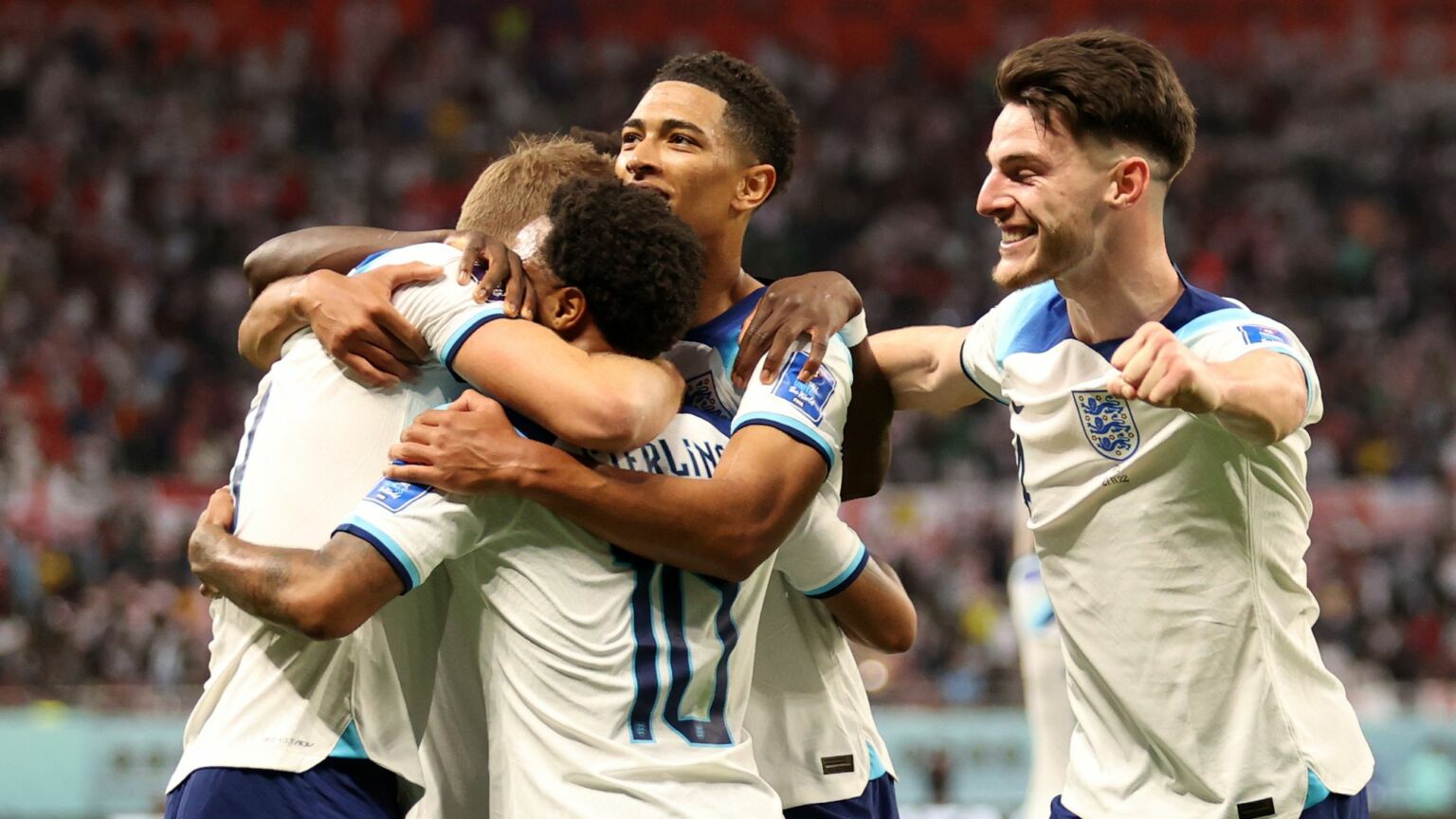 That’s more like it! England’s spectacular opening-match victory in Qatar yesterday has boosted home enthusiasm for this controversial World Cup. The result wasn’t only England 6, Iran 2. It was also Football 1, Woke Posturing 0. But that struggle for the soul of the world’s biggest sporting contest is not over yet.

You wait four years for a World Cup and then two come along at once. It is now clear that we are witnessing a clash between two versions that are culturally at least as far apart as the UK and the Islamic Republic of Iran.

On one side there is the proper football World Cup – a sporting tournament played out on the pitch, which is all about scoring goals and stars the best players on Earth.

On the other, there is the new woke World Cup – a culture war played out in the media (but projected towards the pitch), which is all about pious politically correct point-scoring using rainbow armbands, knee-taking etc. In this version, the repressive Gulf state of Qatar is a convenient stage on which to strike virtuous poses against homophobia or racism, while the players are reduced to (sometimes willing) pawns in a political game.

The clash between the two World Cups, over the values and meaning of international sport, could be as important as the outcome of the football tournament itself. Because make no mistake, if the woke version of the World Cup wins, it could destroy the integrity and excitement of football just as effectively as the trans lobby is undermining women’s sport.

What Monday’s events showed, however, is that football still has the professional skills and popular appeal to win the battle for hearts and minds.

At first the news was all about the woke World Cup. England coach Gareth Southgate proudly announced that his team would resume taking the knee before matches in Qatar. Southgate has long seen taking the knee as a means to ‘educate’ the rest of the world about social-justice issues. Meanwhile, media pundits excitedly speculated that England might defy the world football authority, FIFA, by sending out team captain Harry Kane wearing the ‘One Love’ rainbow armband, which is formally banned (as are all political slogans).

Then, at the first sign of a bruising tackle, the woke poseurs left the field and the real World Cup kicked in. The ‘One Love’ group of European nations announced that it would drop the precious armband after all, for fear that captains wearing it might be given a yellow card by referees. The horror, the horror.

Next, England vs Iran kicked off and we were reminded that, as the wise old player and manager Danny Blanchflower famously said: ‘The game is about glory. It is about doing things in style, with a flourish, about going out and beating the other lot, not waiting for them to die of boredom.’ For 90-odd minutes of play, the glorious spectacle of a young England team scoring six goals in the opening fixture of a major tournament blew all the nonsense away as readily as it did the Iranian defence.

But let’s not think it’s all over. After all, the England players did take the knee beforehand, however briefly, apparently in order to teach the ignorant masses a lesson. It still sticks in the craw to see millionaire footballers from Britain’s least-racist profession – five of those six goals were scored by well-rewarded and much-loved black players – presuming to lecture the rest of us about… what, exactly?

And the woke World Cup is still being fought for by the army of self-righteous media know-alls, led by top BBC wokesperson Gary Lineker. After the teams dropped the rainbow captain’s armband, ubiquitous BBC pundit Alex Scott appeared on the pitch proudly wearing both a One Love armband and one of the smuggest looks ever seen on screen. Was she supposed to be taking a ‘brave’ stand? There was never any danger of FIFA or anybody else giving this crew a red card.

Speaking of bravery, the Iran team surely showed it before the match by refusing to sing the national anthem. That quiet gesture was a meaningful protest in solidarity with their own people’s current struggle against the repressive Islamic regime – a world away from the game of striking loud self-important poses ‘on behalf of’ others. And the Iranians were risking rather more than a yellow card in defying their rulers.

As I wrote on spiked before Qatar 2022 began, the World Cup has always been a political football. But in previous tournaments, the political controversies have been overshadowed once the actual football kicked off. What has made things even worse this time is the combination of the transparently crazy, corrupt decision to award the World Cup to Qatar and the rise of woke ‘soccerism’ – the use of football for politically correct ends.

Until yesterday, the lack of public enthusiasm at home was palpable. There were more early Christmas decorations than England flags of St George on display in my part of north-east London. Thank goodness, then, that Southgate let England off his usual defensive leash and went for glory against Iran.

True, England were up against a team displaying so little adventure that it might have been coached by, well, Gareth Southgate. Yet the Iranians still managed to score twice. We shall see if England keep their nerve and show the same attacking zeal against more formidable opponents. Hope springs eternal in us long-suffering fans.

For now, however, the real World Cup is at least alive and kicking.