What incels and trans activists have in common

Both have a visceral loathing for women’s rights. 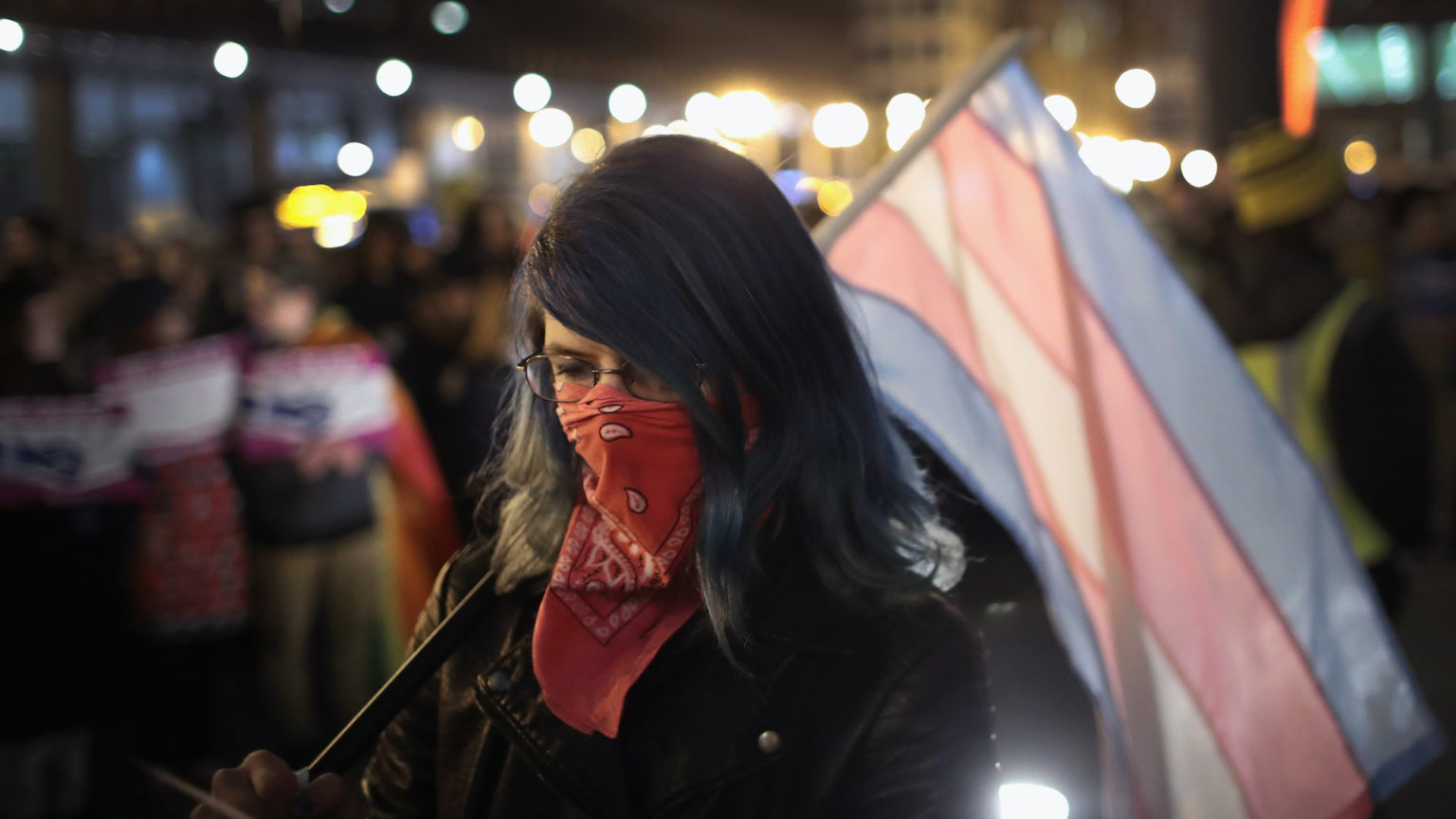 Surveying the sea of men surrounding the female speakers at a Let Women Speak event in Brighton last month, with their black hoodies, black balaclavas, black sunglasses, black bandanas and – for that stylish, finishing touch – black weighted gloves (serving the same function as knuckle-dusters), I reflected that it’s no coincidence that they resembled criminals seeking to conceal themselves from CCTV. It also struck me how much these young men have in common with their alleged enemies on the right – the ‘incels’. The ‘Black Pampers’, as an unidentified feminist wit dubbed them, want more than anything to stop women from standing up for their rights. Like the incels, these trust-fund Antifas want to return to a time when being male automatically meant being on top of the heap, even when sadly lacking in other ways.

The main target of this circle-jerk of goons was the pink jumpsuited figure of Kellie-Jay Keen – creator of Standing for Women and inventor of the ‘Adult Human Female’ slogan, which has upset so many enemies of biological fact. Her message is simple. There is no such thing as being born in the wrong body. There are a tiny number of unfortunate hermaphrodites. The rest of the trans lobby is made up of heterosexual men who get a thrill from dressing as women. Often they are also misogynists who get a thrill out of spoiling women’s spaces, be they toilets or sports podiums. It’s a shame that the old word for ‘transsexual’ went out of style, as most who call themselves trans today are simply transvestites, or better yet ‘cross-dressers’ – very cross indeed, in the case of the Brighton contingent.

Keen’s striking good looks (mature Marilyn Monroe meets young Queen Elizabeth II) have proved an extra-sharp thorn in the sides of those who fear and / or loathe her. In an amusing twist on an old diss, many men want to be her and many women want to be with her. As for the young men screaming hate at her, one can only guess at the murkiness of their muddled emotions.

Pink News complained of ‘a heavy police presence’ at the Brighton demo, ‘with officers keeping protesters and counter-protesters separated’. Trans filmmaker Fox Fisher ‘felt the police were sending a message that they were “protecting the TERFs and their right to say hateful and hurtful things… One transphobe was having a direct interaction with a trans-rights supporter, batting backhanded words like tennis with the police forming the net between the two opponents.”’ The police maintaining the peace – how very dare they?

The speakers kept coming, despite the counter-protests. They shared their experiences of violence and sexual abuse, as well as their experiences of being shunned and sacked simply for believing that women’s rights should be protected. The good nature of the women was remarkable – if not for the smoke bombs the Men in Black were throwing at us, it could have been a work day out. I spotted women of all ages and ethnicities, lots of lesbians, some cute heterosexual couples and friendly men. And from the other side, a steady stream of hatred at our disobedience.

I couldn’t help noticing that the Men in Black’s garb was the only black thing about them. To paraphrase Jon Snow on a Brexit rally, I’d never seen such an all-white turnout in my life, a fact which seemed to make them extra angry with the people of colour on our side. Women wearing lesbian t-shirts were called ‘freaks’. A woman on a mobility scooter was surrounded and menaced. But the lunacy of the other side really peaked when a policy caseworker for Brighton MP Lloyd Russell-Moyle accused a free-speech-supporting father of raising his baby to be a fascist.

The Black Pampers think of themselves as left-wing, but I’ve been on enough picket lines and protest marches during my life (my dad was a communist and trades-union organiser) to know that this is not the usual way left-wing men behave. One of the first trans-on-woman attacks in this country was when a 60-year-old grandmother, Maria MacLachlan, was beaten up by a 25-year-old man at Speakers’ Corner in Hyde Park in 2017. A year later, the assailant, who calls himself ‘Tara the TERF Slayer’, was reportedly accompanied to court by more men in black, three fighting dogs (Dobermans and Mastiffs) and ‘a huge sound system blaring death metal’. ‘The machismo of it all was palpable’, Jen Izaakson noted in Feminist Current.

It’s obvious that these are very angry young men – but rather than being angry at society, they are angry with women. In the fetid echo chamber they inhabit, they bounce from ‘uni’ to squat to public-disorder incidents without gaining any wisdom, staying in a state of adolescent anger. One of the banners I saw in Brighton – with ‘COMMUNITY DEFENCE’ written alongside a drawing of a Molotov cocktail – could have been done by a particularly disturbed primary-school child.

The Black Pampers brigade at least know enough not to vocalise their loathing of feminism. But they express it in many ways, from their repeated chanting of ‘You’re not real feminists’ at the TERFs (real feminism apparently meaning letting men do whatever they want) to demonising the beautiful Suffragette colours – even to the extent that a Scots woman was arrested for posting a green, white and purple ribbon on Twitter because one particularly nutty trans activist felt ‘threatened’ by this ‘noose’.

The words of an LSE Gender Studies student, Matt Thompson, were highlighted by Sex Matters last year. They came to the fore once more last week when one of his teachers, Dr Jacob Breslow, resigned as a trustee from trans charity Mermaids, after he was alleged to have given a talk for a ‘paedophile aid’ organisation. Thompson wrote in an essay: ‘If TERFs think trans is an endemic threat to feminism, let us be the threat to feminism… Picture this: I hold a knife to your throat and spit my transness into your ear. Does it turn you on? Are you scared? I fucking hope so.’ Instead of being mocked as an inadequate pornographer, Thompson was invited to present the same paper at a conference in the Department of Gender Studies.

Like the incels, the Black Pampers seem outraged that women generally get to choose who they have sex with – and that lesbians, in particular, wish to exclude them. This is why males who identify as lesbians are obsessed with the ‘cotton ceiling’ and are colonising lesbian dating apps. That women ‘won’t share’ in this most intimate of arenas has infected them with a self-righteous rage which is beyond ugly to behold.

Remember that next time the Men in Black identify as revolutionaries. Scratch an Antifa and find an incel, brothers-in-arms against uppity women.