How can you scream ‘fascist!’ at a baby and still think you’re one of the good guys? 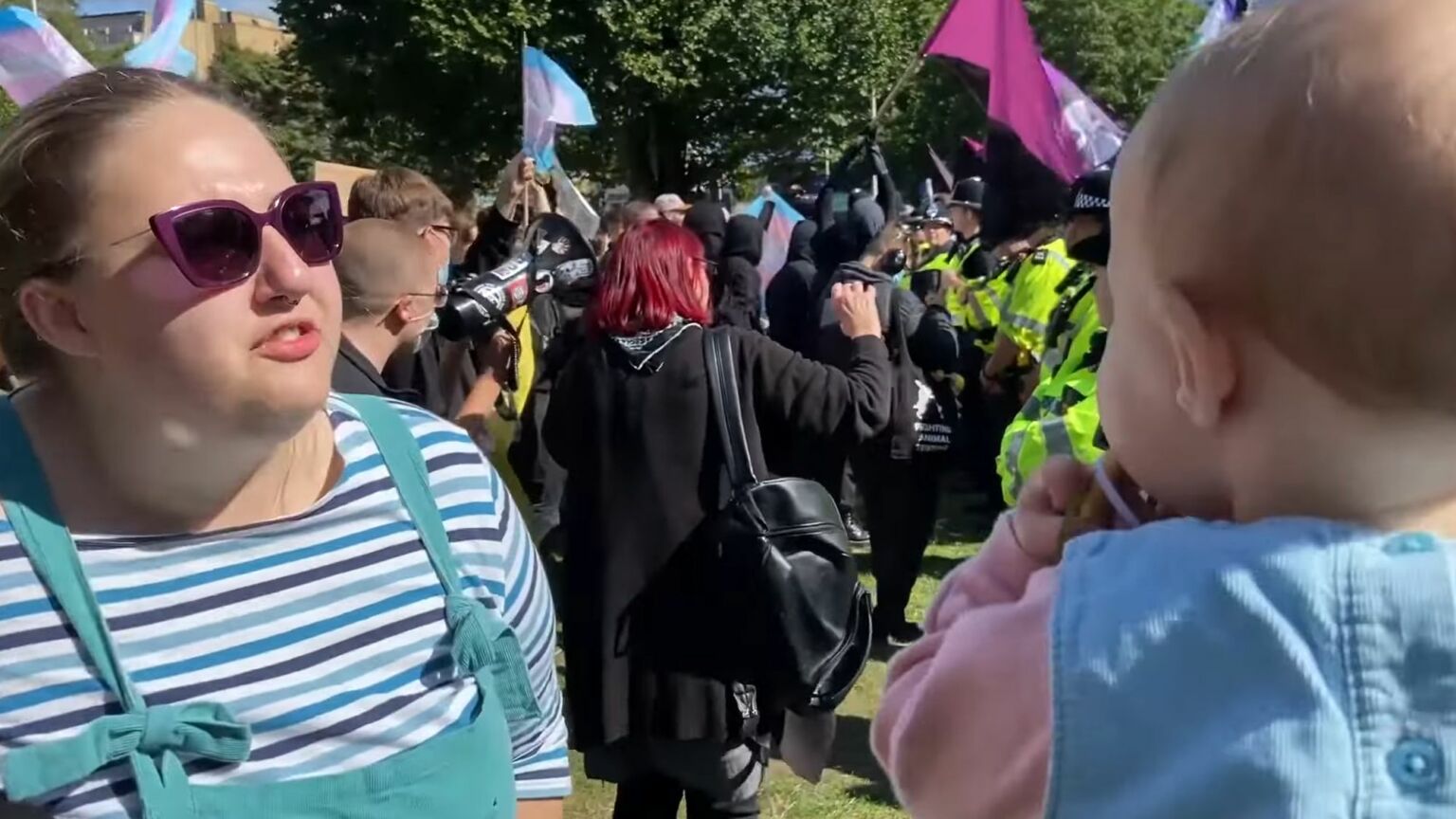 ‘When people show you who they are’, Maya Angelou once said, ‘believe them the first time’. This hard-won lesson usually has the weight of common law for the unforgiving left. It might even be called the moral foundation or the axiom of cancel culture. So be it.

Last Saturday, in my home town of Brighton, Carly-May Kavanagh, a policy caseworker for Brighton MP Lloyd Russell-Moyle, was filmed with an ally, sneering at a man who had brought his baby with him to a women’s rights gathering entitled ‘Let Women Speak’. In the now viral video, Kavanagh and her friend, who were counter-protesting the event, tell the man that he is ‘not a feminist’, but a fascist, an actual fascist, and he is clearly raising his child to be one, too.

The father’s crime was to have lent support to the view that biological sex is real – a view now seemingly considered to be a form of ‘biolo-fascism’ by trans-rights activists. After all, as Kavanagh reminds the father, with an admirable grasp of these basic facts, ‘it is 2022’. And such views, in our time, are ‘disgusting’. The man, to his credit, seems remarkably unprovoked.

It is hard to know which ideology, in this scenario, has been more denuded of its meaning: feminism or fascism? I think the latter.

True, I cannot believe that the likes of Germaine Greer or Simone de Beauvoir would feel very comfortable with lending their support to the two women here, or rather, finding out that fourth-wave, ‘intersectional’ feminism had brought us to this juncture. If this confrontation were to be beamed back to the 1960s, it might encourage them initially to see that women are still sticking it to The – or at least a – Man. And once they had heard that this event was calling for women to be allowed to speak, they would have rejoiced to see two women doing just that! Great!

But once they had learned how to turn the sound on, they would then be crushed by the realisation that the two women in this scene are railing against the rally calling for the amplification of their own sex.

This isn’t an entirely hypothetical scenario, of course. Greer has lived long enough to see herself denounced by younger feminists as a reactionary figure, supposedly contorted by hate. Her views, that transgender women are ‘not women’, are well known.

De Beauvoir, on the other hand, is credited with igniting the touchpaper of gender self-identification decades ago, with her observation that no one is born a woman, but rather one ‘becomes’ a woman, over the course of a lifetime’s negotiation with society. Still, she would have no idea of the more recent ramifications of this idea and would surely be surprised to learn just who is now able to call themselves a woman. Once this had been explained to her – and she had managed to re-close her jaw and resume breathing – her opinion would be unlikely to deviate much from Greer’s.

The man in this encounter is, after all, literally shouldering his share of the burden of parenthood and lending support to the idea that women should be heard. He looks as likely to have Simone’s seminal work on his bookshelf as he does his own seminal work on his chest. He might even have read it.

But, then again, had Benito Mussolini been told that fascism was alive and well in the United Kingdom of the 21st century, and had then been shown this man and his baby as proof, I think he would have felt he had been the butt of a cruel joke.

Mussolini would surely hope to find a more robust example of his revanchist programmes, his schemes for restoring national pride, his all-conquering doctrines of unity, energy and purity, than such a reedy individual. The man accused of being a fascist is all lumberjack shirt and no lumber. He is patiently bearing not only the weight of an infant, but also the brunt of sarcastic invective from two fearlessly sneering women (over whom Il Duce would surely expect him to wield some natural authority).

But then, depending on which is your favourite of the Alice trilogy, we have been through the Looking Glass, down the Rabbit Hole or up Shit Creek for some time now. Nothing is what it seems, or what it identifies as.

Kavanagh did not, despite what you might have heard on social media, quite call the baby a fascist. Although I would have to say, if she had called the baby a fascist, I would probably have had a bit more sympathy with her.

Although I would want to see the provocation, there is no question that babies can be tyrants, even if they rarely have the organisational nous that mark out the true fascist from the LARPing wannabe. And being famously prone to demanding instant gratification of their every appetite, they are ill-equipped to exercise the self-discipline that fascism’s martial traditions demand.

But no. What Kavanagh questioned was the wisdom, as she saw it, of the man’s intent to raise the baby to be a ‘fascist’, to indulge in the filth of regarding biological sex as fundamental to womanhood.

She did not suggest that the baby itself had already succumbed. Perhaps she was preparing the ground for a private chat with the little fella – a spot of re-education, where they might share a plan to help him escape his certain fate. So she has that in her defence.

What is perhaps most chilling about the encounter is the fact that she doesn’t ever seem to ‘lose it’. She seems perfectly in control as she snarls at a father, over his baby son’s head, that he is a fascist and is doing his son harm. That, I have to say, is a bit off.

You might put it down to the heat of the moment. And she has since apologised. At least to an extent. She has apologised for how her actions might now be used against her friends in the trans movement. She has not apologised to the father, or to the baby or to society at large, but for behaviour which, she fears, it is all too easy to present as being somehow typical or representative of trans-rights activism as a whole. For the pretty straightforward reason that it is indeed representative.

Still, I don’t want to see her sacked or otherwise disciplined. This magazine, and the present writer, are absolutely clear where we stand on cancel culture. We’re agin it. Tweet archaeology, taking jokes out of context, holding someone’s political views as disqualifying to their pursuit of an apolitical career – all these are examples of bad trends in modern life.

I am not calling for her to lose her job. I just want this to be remembered. To be properly logged. To appear on the ledger, in black, indissoluble ink. Because this kind of low, venal behaviour keeps repeating itself again and again and again, at gatherings and protests up and down the country and on social media. And yet, for many observers, what we’re dealing with still hasn’t quite sunk in.

It is always from the same side, this poison. It always comes with the same barely concealed relish for the distress it causes. And still, somehow, the mainstream view is that it’s the ‘gender critical’ ones, the so-called TERFs, who are the problem. And it is the ones spitting contempt at women and their husbands and their babies who are the good guys.

The idea is still in play, somehow, that it is the ‘adult human females’ and their male allies who are seething with hatred, bigotry and spite. And it is the ones in the black outfits and the masks, who issue death threats to beloved children’s authors, burn books and smash windows of establishments thought to harbour their enemies, who are all that stand between us and fascism.

Through the looking glass, indeed.