How the West’s crisis of moral judgement is inflaming the insanity of identity politics. 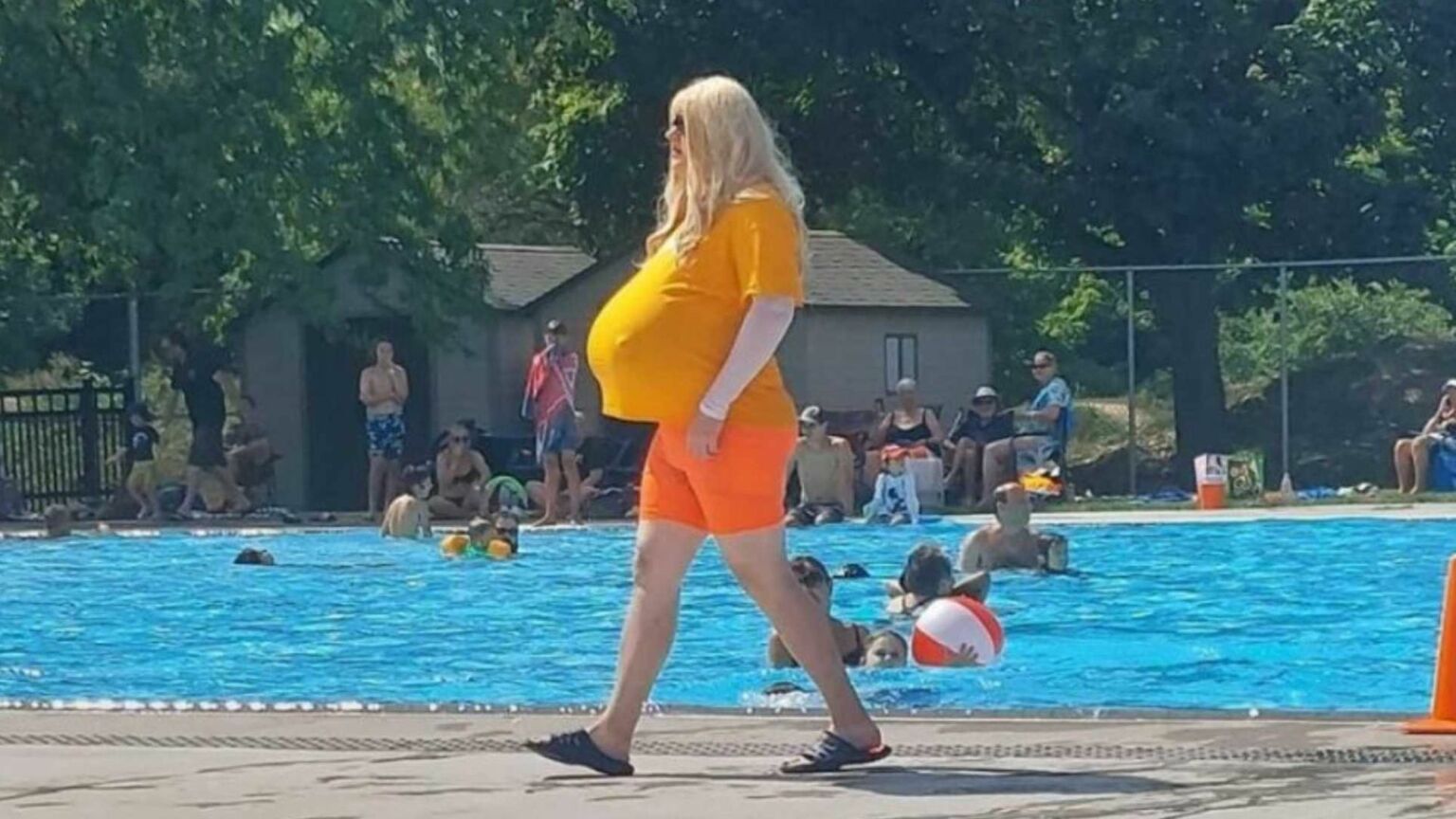 For me, the most disturbing thing about the Canadian teacher with the fake boobs is not the prosthetics themselves, ridiculous as they are. It isn’t the huge sexualised nipples, which all but confirm that the bloke is getting some kind of thrill from parading around in front of his teenage charges dolled up like a Halloween porn freak. It isn’t even the fact that there are men out there who are happy to behave in such a depraved way – we’ve known that for quite some time. No, it’s the fact that his school defended him, and what’s more that it defended him on the grounds of respecting ‘gender identity and gender expression’. There have always been weirdos in society – what’s new in the 21st century is the willingness of so many institutions to validate weirdos.

Kayla Lemieux, as the shop teacher at Oakville Trafalgar High School in Ontario, Canada styled himself when he decided to become a ‘transwoman’, has been going viral for the past week over his massive fake boobs. Images show Mr Lemieux in a bad blonde wig, tight biker shorts and a close-fitting top that is barely able to contain his outsized prosthetic breasts. In this get-up he is seen teaching his pupils how to use a saw to cut wood. It is staggeringly inappropriate. Ontario parents are rightly furious that a man who clearly has some kind of messed-up breast fetish is teaching their kids while engaging in that fetish. As some observers have pointed out, he seems to be using the pupils as props in a kind of sexual game. After all, exhibitionists depend for their kicks on being looked at, and in that classroom Mr Lemieux has a group of young people who have no choice but to look at him and his perverse bulging fake tits.

And now we know why these kids had to look, why they had to be in a classroom with a man who clearly has issues – it’s because their school thinks this is all fine and dandy. In response to ‘discussion on social media’, Oakville Trafalgar High issued a statement saying it is committed to ‘establishing and maintaining a safe, caring, inclusive, equitable and welcoming learning and working environment for all students and staff’. And this includes, it says, the right of staff to enjoy ‘equitable treatment’ for their ‘gender identity and gender expression’. In short, Lemieux’s grotesque parody of womanhood is his completely valid gender identity, and who are we to criticise him, far less tell him to get the hell away from those children?

The real problem here is the cult of validation. We are now expected to validate all sorts of wacky identities. That v-word is everywhere. It’s in the slogan of the trans lobby, as promoted by Stonewall: ‘Trans women are women. Trans men are men. Non-binary people are valid.’ It abounds on social-media hangouts like TikTok. In fact, on TikTok ‘valid’ doesn’t only mean acceptable or reasonable, but also cool and exciting. As Urban Dictionary explains, ‘valid’ is now used both to indicate that ‘someone’s personality, character or entire existence is 100 per cent normal’ and to describe things that are ‘enjoyable and fun’. So the switched-on young might say ‘my pronouns are valid’ or ‘that movie was well valid’. Validation is the holy grail of the identitarian-minded. As Francis Fukuyama says in Identity: The Demand for Dignity and The Politics of Resentment, modern identity politics ‘places a supreme value on authenticity, on the validation of [the] inner being…’. In earlier times people chased the favour of priests, the blessing of the church; now they’re desperate for ‘validation’ from a new, less godly elite.

And if they don’t get it, they will suffer. They will feel oppressed. They might even die. Failure to validate teenagers’ trans identities leads to a hike in suicide attempts, say cynical campaigners. Say a single contradictory word about someone’s gender identity and you’ll be accused of ‘erasing’ them. This is how sacred the act of validation has become in the 21st century – so much so that people will feel ‘destroyed, obliterated’, which is what ‘erased’ means, if they don’t receive it. Maybe this is why so many institutions are so quick and unquestioning in their validation of certain identities. From schools to universities, banks to the civil service, everyone is now pressured to speak and behave in a way that validates other people’s identity expression, especially their gender expression. You must use the right pronouns, welcome the man who thinks he’s a woman into your female changing room, use ‘they’ or ‘ze’ or ‘zir’ for those who fantasise that they are neither male nor female. Even the literal Royal Air Force now tells its pilots to use whatever pronoun a person demands they use – even ze, per and hir – because ‘total inclusivity is non-negotiable’ (my emphasis).

There it is. All of this is ‘non-negotiable’. We’re all slaves to validation now. It’s the new religious correctness – validate that person’s identity with your every utterance and mannerism or risk being branded one of the ‘erasers’ who is a threat to minority rights. This is how people like Kayla Lemieux come into existence. They clock that they live in societies that will validate almost any gender identity, and which will punish the bigoted erasers who dare to question these gender identities. And so they know they can pretty much do what they like. Be whatever they want. Indeed, even the media outlets that are expressing alarm over Lemieux and his misogynistic knockers still validate him. They’re calling him ‘she’ and ‘her’. They’re validating his greatest delusion – that he is a woman. His belief that he has the right to parade around in front of kids while wearing bizarre prosthetic breasts is only a cranky extension of his belief that he is female despite all the evidence to the contrary. A society that is unwilling to say ‘Actually, you are a man’ to men who think they’re women is not in a strong position to say ‘Actually, you are not allowed to wear those prosthetics in school’ to Mr Lemieux.

In part, then, the cult of validation is an extension of the moral cowardice, the moral disarray, of the modern West. We seem utterly unwilling to make moral judgements about certain identities and lifestyles, and this has had the entirely predictable effect of inciting some people to be evermore outlandish in their identity claims. They know their society lacks the moral wherewithal to rebuke them. So full-on men with beards will identify as lesbians. People will insist you refer to them with the pronouns ‘kitten / kittenself’. The BBC will happily include photos of fiftysomething blokes in nappies in its coverage of Pride – is that a valid identity, too? In its most extreme form, the cult of validation leads to paedophiles being rechristened ‘minor-attracted persons’, or MAPs. Well, we wouldn’t want to erase the identity of adults who are sexually atracted to children, would we? (Actually, yes, we would.)

The cult of validation is so powerful that almost every social good is now subordinate to it. Women’s spaces have been subordinated to the higher goal of validating the identities of men who think they are women. Grammar is subordinated to the ‘they’ pronoun. Even journalistic objectivity plays second fiddle to the religion of validation. Witness not only the media’s use of female pronouns to refer to obvious bloke Kayla Lemieux but also the way that even an esteemed organ like Time now uses nonsensical neopronouns. It recently tweeted about interviewing a ‘gender queer’ author about ‘eir work, the efforts to restrict access to eir writing, and what ey make of the current cultural moment’. Ey – eh? Reason be damned – validation conquers you, too.

The Lemieux scandal – and, more importantly, the response of his school to the scandal – suggests even education has now been subordinated to the validation crusade. When schools, like this one in Ontario, emphasise the importance of respecting teachers’ ‘gender identity and gender expression’, it is clear that education has become as much about validating adult identities as it has about expanding children’s minds. Libs of TikTok also shines a light on a new intake of hyper-woke teachers who seem obsessed with plastering their own gender identities and woke beliefs all over their classrooms. Education – the imparting of a society’s common knowledge and traditions to the next generation – is the most important task that adults have. If even this noble endeavour comes to be more about fanning the self-esteem of the teacher than deepening the knowledge of the child, we will know that Western society has been well and truly morally unanchored; that it has had its bearings utterly upended by the sanctification of validation above all else.

One of the most sinister things about the cult of validation is that it doesn’t validate all identities. On the contrary, it delegitimises and even demeans some. If your identity is judged to run in any way counter to what are presumed to be the more important and interesting identities of modern times, it will be invalidated. This is why lesbians who emphasise that they are same-sex attracted are so hated by the woke – because their sex-focused identity is seen as harmful to more fashionable gender-focused identities. And why women who speak of ‘women’s rights’ are branded bigots – because their identity is judged a threat to the feelings of men who want to be women. Likewise, the Jewish identity or Hindu identity enjoy less validation than other identities, on the basis that they are ‘privileged’, and thus possibly oppressive. This is what is most terrifying about the cult of validation – it empowers the technocratic elites not only to confer legitimacy on what we would all have agreed were cranky, even perverted pastimes just a few years ago, but also to withdraw legitimacy from identities which, through no fault of their own, have become ‘problematic’ in recent years. The religion of validation makes gods of some and devils of others – a recipe for identitarian conflict, social tension and even violence.

We need to bring back moral judgement. That is one way we will tackle the tyrannical validators who rule over us. We need to say that Kayla Lemieux is not a woman and that he should not be allowed to wear prosthetic breasts while teaching children. The rights of children to uninterrupted education take precedence over the rights of a man to give expression to his fucked-up fantasies. Until our societies can say something as basically moral as that, they will remain lost.