The queen and the colonies: it’s complicated

The US media are wrong to portray the queen as the hated face of imperial aggression. 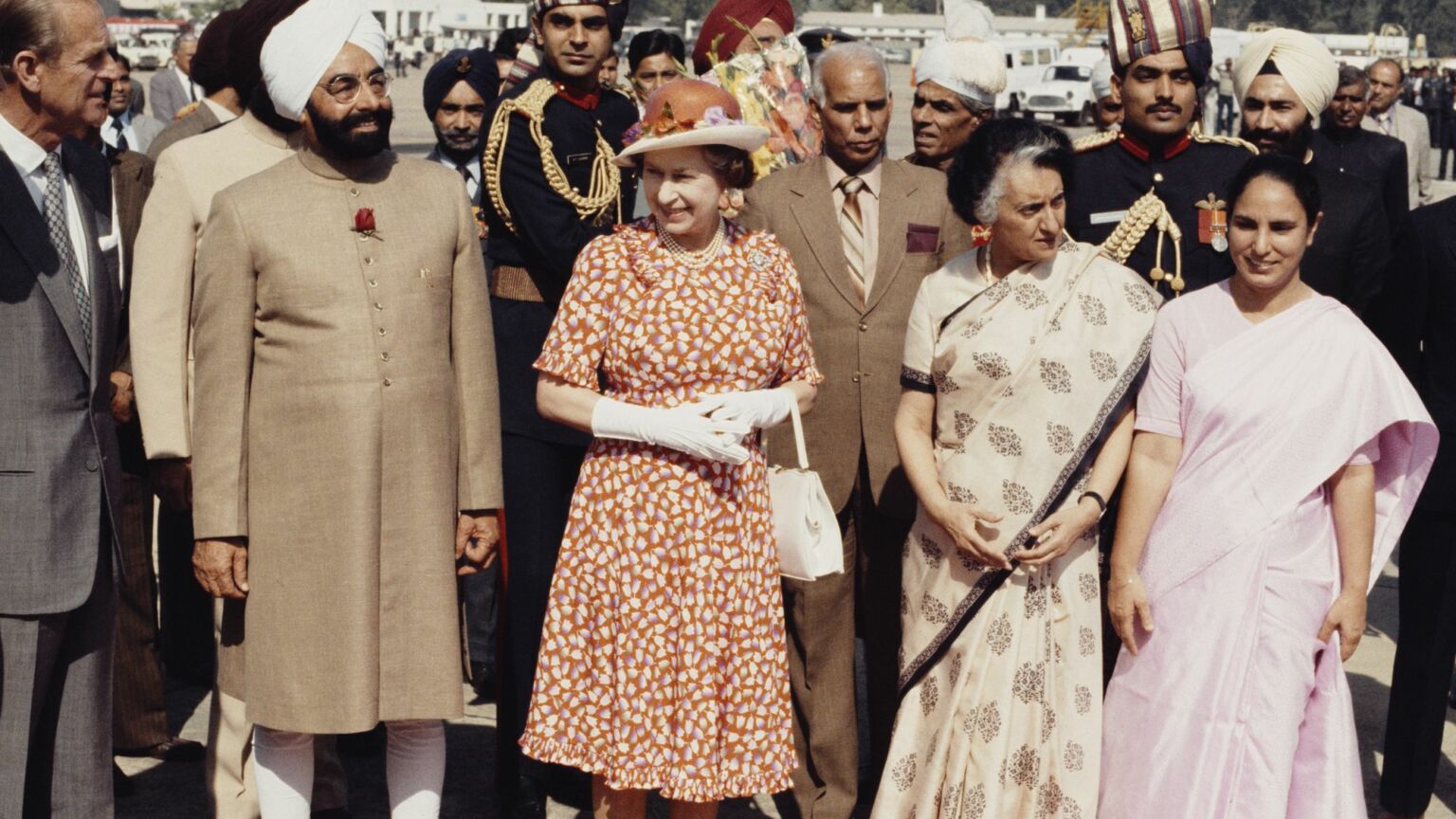 When Queen Elizabeth II died last week, the overwhelming feeling in Britain was one of sorrow. The vast majority wanted to honour her 70 years of service to her country. Not everyone agreed, of course. But it has not been easy for anti-monarchists in Britain to give the republican argument a human face. After all, who wants to be seen jeering after the death of a woman in her nineties?

Critics of the monarchy have instead turned their focus to the rest of the world. Queen Elizabeth II was not just the queen of Britain, they remind us – she was also the head of the Commonwealth and, at one point at least, the face of the British Empire. Of the handful of critical comment pieces on Elizabeth’s life that have broken through the otherwise flattering coverage in the press, almost all have focused on the queen’s connection to empire. Even her role in leading the Commonwealth – a voluntary association of 56 nations, most of which are former British colonies – has come under stinging attack.

The New York Times has carried several such pieces, in which historian Maya Jasanoff, novelist Hari Kunzru (who grew up in Britain but has since moved to New York) and Australia bureau chief Damien Cave have highlighted the ‘crimes committed in her name’ in Ireland, Kenya, Malaya and elsewhere. According to Jasanoff, the image of the queen as beneficent patron of the Commonwealth was belied by the terrible violence that characterised imperial domination.

On Twitter, Uju Anya, linguistics professor at Carnegie Mellon in Pittsburgh, Pennsylvania, wrote a sharp message saying that Elizabeth should ‘die in agony’ for what she had done in Africa. Others relished the idea that ‘Irish Twitter’ and ‘Black Twitter’ were united in rejecting the queen and all she stood for.

However, the relationship of the monarchy to the British Empire, and of the empire to its subjects, has never been a black and white issue. The British Empire was indeed a domineering, exploitative and often brutal force, in the many phases of its history. But it did not – and could not – govern without the collaboration of local allies.

Looking around the world today, attitudes to the queen’s death and to the Commonwealth she led are complicated. Commonwealth countries have sent condolences and, in many cases, they have declared official periods of national mourning. This includes India, Pakistan, Bangladesh, Canada, Australia, New Zealand, Ghana, Kenya and Malawi – and even Rwanda and Brazil, which were never a part of the British Empire (nor even the Commonwealth in Brazil’s case). In Hong Kong, thousands queued for hours to sign a condolence book at the British Consulate. In the Middle East, Dubai illuminated its Burj Khalifa tower with a portrait of the queen, while Abu Dhabi lit up its landmarks in purple to pay tribute.

Some politicians from former colonies have had to navigate a tricky path between anti-colonial insurgency and respectability. Michelle O’Neill of Sinn Féin – the political party of the old Irish Republican Army – issued a statement on Thursday regretting the queen’s death, saying: ‘I am grateful for Queen Elizabeth’s significant contribution and determined efforts to advancing peace and reconciliation between our two islands.’

Such a response stands in stark contrast to the recent past, when Irish republicans had no qualms about admonishing the queen. In 1981, I was at an Irish unity protest in London where Leo O’Neill and some of his comrades in the Irish Republican Socialist Party pushed through police barricades to wave a banner at the queen that said: ‘Lizzie Brit – Queen of Death!’ After all, this was a time when many felt the British Army was effectively occupying Northern Ireland, when republicans were on hunger strike in prison, and when the British state imposed a conveyor-belt form of justice on Irish republicans with juryless trials.

Perhaps we shouldn’t read too much into the carefully prepared official condolences. There is no doubt that Britain’s reputation around the world has been coloured by the record of the empire and certainly this will have rubbed off on the queen, too. Colonialism was destructive, intolerable even. It would still be here if it weren’t.

Mukoma Wa Ngugi, a Kenyan-American writer and literature professor at Cornell University, seemed to speak for many around the world when he said: ‘If the queen had apologised for slavery, colonialism and neo-colonialism and urged the crown to offer reparations for the millions of lives taken in her / their names, then perhaps I would do the human thing and feel bad.’ But since she had not, ‘As a Kenyan, I feel nothing. This theatre is absurd.’

Yet at the same time, if the British Empire had been solely destructive, it could never have survived for so long. One reason it did last is that it tended to rule in collaboration with locals, especially local elites.

Nigerian president Muhammadu Buhari made an important point when he said that his country’s history ‘will never be complete without a chapter on Queen Elizabeth II’. For good and for ill, the history of the British Empire is also the history of a great many different nations in the world.

For those Arab rulers in Saudi Arabia and the United Arab Emirates – formerly the Trucial States, which signed treaties with the British Empire in the 19th century – the relationship with Britain and the royal family had a particular dynamic. Conservative Arab rulers embraced Britain, which allied with them against the popular nationalist movements that threatened their rule.

This was the grisly role played by the Royal Yacht, on which the royal family and other British officials undertook countless foreign visits from 1954 to 1997. For the most part, the yacht was a floating arms bazaar. Ministry of Defence officials would show off the latest kit from its decks, before members of the royal family were helicoptered in to close the deals. This is one reason why the elites of the Gulf states identify so strongly with the British monarchy.

Attitudes to the queen and the monarchy in the ‘white’ or ‘settled’ Commonwealth are divided. In Australia and New Zealand, where Elizabeth was still queen, opinion polls have registered a slight dip in aspirations to abolish the monarchy in recent years. At present, monarchy is favoured by around 60 per cent of Australians and 50 per cent of New Zealanders (with 44 per cent for a republic, and the rest not knowing). In Canada, in contrast, polls regularly show support for abandoning the monarchy.

In the West Indies, sentiment for change is much more marked. Belize, the Bahamas, Jamaica, Grenada, Antigua and Barbuda and St Kitts and Nevis have all indicated that they want to free themselves of the monarchy.

In the former colonies, attitudes towards the queen are invariably mixed up with views about the empire. However, these are, for the most part, attitudes about today rather than about the past. They are largely a reflection of how people feel about what has happened since decolonisation. Populations that are disappointed by the trajectory of their governments following national independence are more likely to look back nostalgically on the empire, as some do in Africa and India today.

Few in Hong Kong in 1997, when sovereignty was returned to China, will have wanted to extend the rule of the last governor, Chris Patten. But Beijing’s clampdown on Hong Kong’s democracy movement in recent years has made Britain look a bit more attractive in retrospect – as the large number of British flags on pro-democracy marches have shown.

For other world leaders, like Indian prime minister Narendra Modi and Rwandan president Paul Kagame, the Commonwealth has been a useful platform for enlarging their influence in their respective regions.

The bold denunciations of the British Empire in the wake of the queen’s death overlook these complexities. In any case, they might have carried more weight if they had been published while there was actually a British Empire. As a rule, however, middle-class critics of injustice are at their most passionate when that injustice is in the past. Slavery and colonialism are easy targets. Here in Britain, the history of the empire has not been taught as an unalloyed good for decades. And despite the endless claims that Britain is gripped by ‘imperial nostalgia’, public opinion is largely hostile to colonialism.

Most of the talk about the British Empire in the past week, especially from British commentators, has little to do with the cruel realities of colonialism. For these supposedly ‘radical’ critics, the empire never ended. It is a statement less about imperialism and more about their discomfort with the direction their own country has gone in.