Censoring dissidents is a terrible way to start this new era. 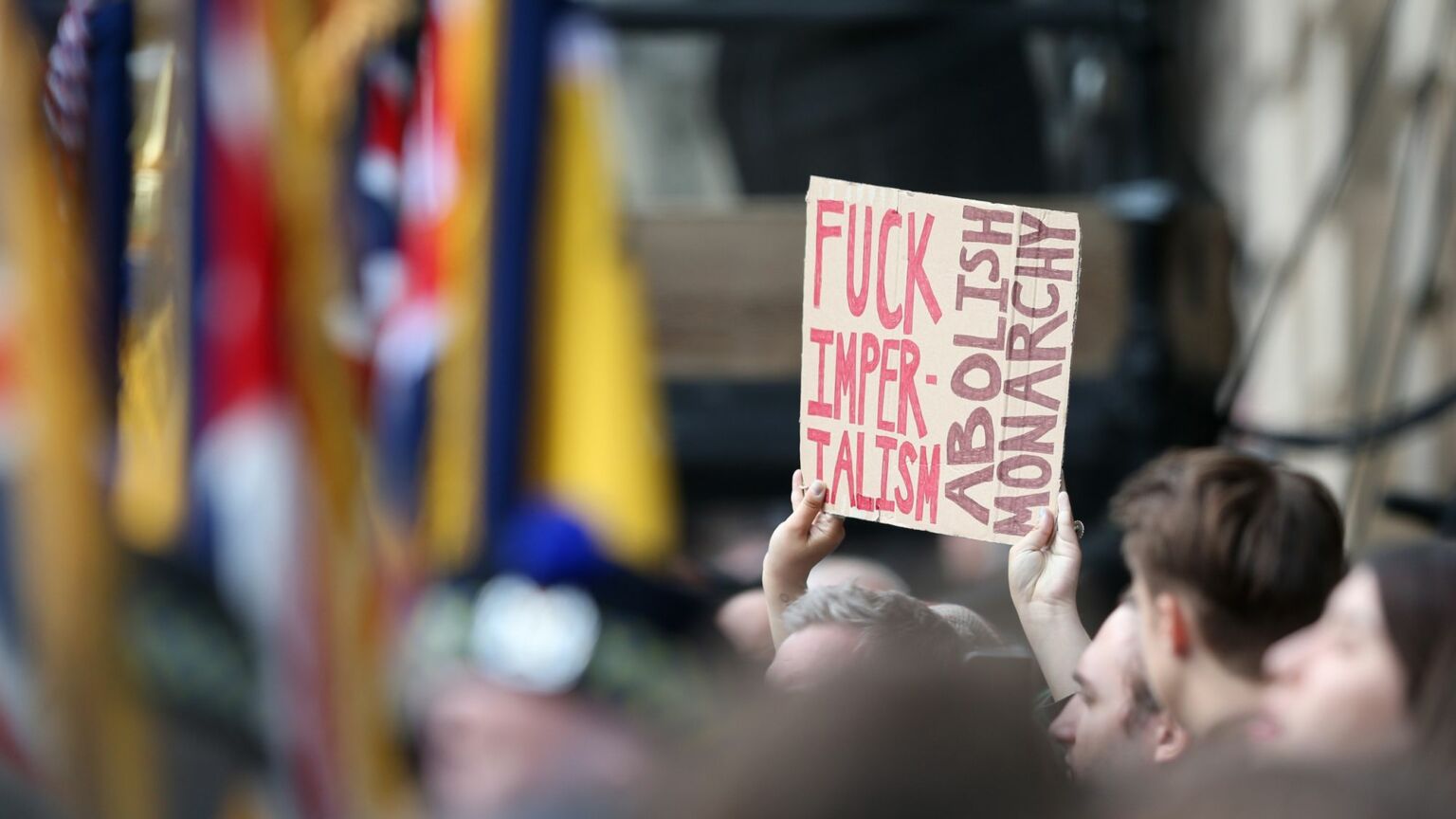 Amid the national mourning that has followed the death of Queen Elizabeth II, a few queen-bashing cranks and disrespectful republicans have been censored or censured for expressing their views.

On Sunday, police in Edinburgh arrested a 22-year-old woman outside St Giles’ Cathedral, where crowds had gathered to await the arrival of the queen’s coffin. She had been holding up a homemade cardboard placard which read, ‘FUCK IMPERIALISM – ABOLISH MONARCHY’.

On the day the queen died, on Thursday, Twitter took down a tweet from Nigerian-born US academic Dr Uju Anya, which said: ‘I heard the chief monarch of a thieving raping genocidal empire is finally dying. May her pain be excruciating.’

Former footballer Trevor Sinclair was suspended as a pundit on talkSPORT radio last Friday, after he tweeted: ‘Racism was outlawed in England in the 1960s and it has been allowed to thrive. So why should blacks and browns mourn? #Queen.’

And Jaki Pickett, owner of Jaki’s Fish and Chips in the Scottish Highlands, had to be escorted by police from her chip shop on Thursday night, after locals gathered to boo her and throw eggs and stones at the windows. A Facebook video showed Pickett holding champagne and a blackboard on which was chalked ‘Lizard Liz is Dead’ and ‘London Bridge Has Fallen’ next to a smiley face. In response, the National Federation of Fish Friers announced that it had revoked her membership.

As a veteran republican myself, I appreciate that these sorts of people might look more like morons than martyrs to most. As a defender of free speech, however, I also believe that cancellation and censorship is no way to respond to their ranting and raving.

The foul-mouthed anti-monarchy protesters in Edinburgh were doing what practitioners of student politics (of all ages) have always done: making a spectacle of themselves in the hope of sparking an outraged reaction. As some mourners at the cathedral told the media, they ‘believe everyone does have a right to protest’, but this was ‘petty’ and ‘just looked like attention-seeking’. Attention-seeking, however, should surely not be an arrestable offence.

As for Dr Uju Anya’s description of Queen Elizabeth as Britain’s ‘chief monarch’ (were there others we weren’t told about?), that looks quite well-informed next to her ignorant attempt to blame the queen for a ‘thieving raping genocidal empire’.

Does the doctor perhaps imagine Elizabeth in a pith helmet, leading rapacious and bloody wars of conquest across Africa and Asia? There we were thinking that the queen had presided over the dissolution of the British Empire.

Yet Twitter should not have censored the academic’s poisonous tweet. It was an extreme example of the fashionable Year Zero attitude to rewriting / erasing history, where the past is portrayed as one long unbroken horror story of white supremacy and genocide.

That campaign against our past, as argued elsewhere on spiked, is really about controlling the present. And it is growing. Anya’s tweet garnered considerable support before it was taken down. We have to counter these dangerous arguments by confronting them, not trying to censor them.

As for Trevor Sinclair, his tweet reads like a daft emotional outburst. Of course, nobody has to join in the national mourning. But nor should they offer bogus excuses for abstaining.

How has racism in Britain been ‘allowed to thrive’? Through the past half century, Britain has become a far more tolerant and open society, compared to the racist nation in which some of us grew up. The main reason for that is not that ‘racism was outlawed in England in the 1960s’, but that public attitudes changed – among the same British people who have been mourning the queen, and not as some sort of symbol of white supremacy.

But whoever expected an ex-footballer or radio sports pundit to be a fount of political wisdom? Tackle Sinclair by all means, but talkSPORT has surely gone over-the-top by showing him a red card.

As for the crazy-sounding chip shop owner in the Highlands, probably the less said the better. If people choose not to patronise her chippy on the basis of the quality of her Facebook videos, rather than her fish suppers, that is their business. But there is a bad smell about any situation where a mob resorts to stoning somebody – either rhetorically or worse, literally – for expressing heretical opinions.

There are both principled and practical reasons not to cancel the cranks and disrespectful republicans. In principle, we defend free speech for all or none at all. It is only those views deemed extreme or offensive that need defending on free-speech grounds. The mainstream can look after itself.

Once you demand new restrictions on what can be said, two questions always arise. First, where do you draw the line? And second, who is going to be empowered to draw it? Do we really want the authorities to re-impose a version of the old common-law offence of ‘seditious libel’, which outlawed any speech deemed to express ‘hatred or contempt’ towards the monarch and their heirs, the government, parliament or the courts?

In practical terms, it is far better to let people speak and expose themselves, rather than try to silence them by force. This is particularly important now.

There are big debates ahead about everything from history and democracy to the line between private and public. The passing of the queen and the end of an era have encouraged those who want to bury much that is good about our society and traditions, along with the bad. The feeling that there is worse to come under the new regime is one reason why, as a republican atheist, I sincerely hoped that God might have saved the queen a while longer.

Our best hope now is to have all these arguments out in the open, rather than trying to censor those we dislike and, in the process, making martyrs out of morons. Free speech remains not the problem, but the best potential solution.

The most vociferous critics of ‘offensive’ free speech in recent times have, of course, come from the identitarian left. So it has been somewhat ironic to see the people who insist that ‘cancel culture’ does not exist protesting about republican protesters being, well, cancelled over the past few days. Maybe they will learn the lesson that free speech is an indivisible liberty, so we need to uphold it – not just for those we agree with, but also for the views that we hate. I won’t hold my breath while waiting for that penny to drop.

Everybody should be free to express their opinion, and everybody else should be free to tell them what they think of it. As so often, the wisdom of the crowd on these matters outweighs that of experts and politicos. As that woman protester waved her semi-literate ‘FUCK IMPERIALISM – ABOLISH MONARCHY’ sign outside the cathedral in Edinburgh on Sunday, people in the crowd reportedly used their freedom of speech to tell her, quite understandably, to pipe down and ‘Have some respect!’ for the occasion. But when police went further and arrested the protester under the Public Order Act, another cry went up: ‘Let her go, it’s free speech!’ And so should say all of us.