Why the Supreme Court’s only black justice has been subjected to so much hatred. 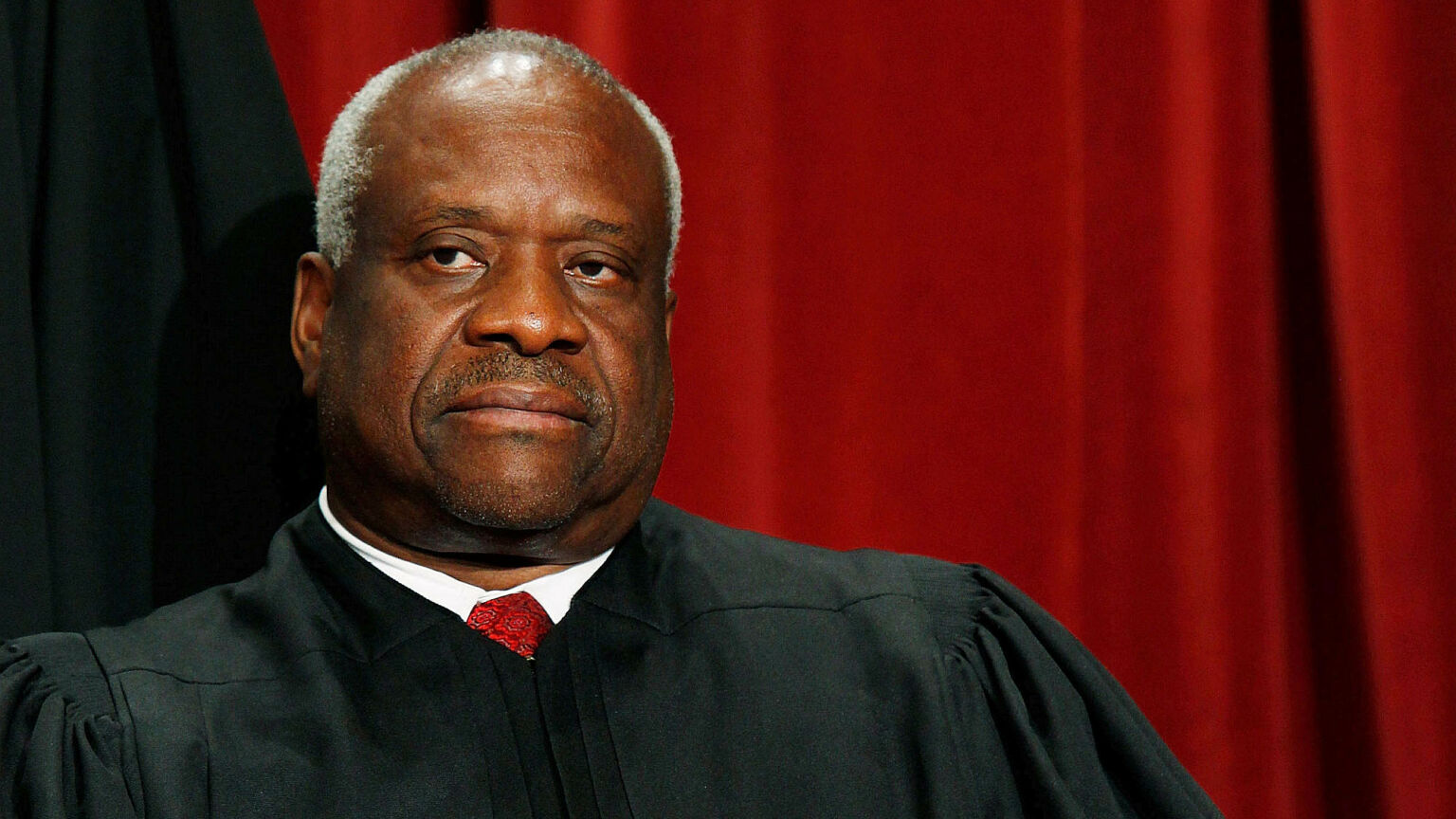 Why has Clarence Thomas become the target of so much flak following the Supreme Court’s overturning of Roe v Wade? It’s because he’s black. It’s because, as someone with black skin, he is not meant to hold conservative views on issues like abortion. In the eyes of the furious woke agitators who are haranguing Thomas even more than they are the other Roe-sceptical justices, he has not only made a bad legal decision – he has also betrayed his race. His sin is twofold: he has undermined the right to abortion and he has failed in his racial duty to nod unquestioningly along to every ‘progressive’ idea. He’s a racial transgressor, a bad black man, and therefore he must be reprimanded even more severely than the white folk on the Supreme Court. Ladies and gentlemen, behold the scourge of woke racism.

We have just witnessed one of the clearest examples yet of identity politics crossing the line into flagrant, undeniable racism. No sooner had it been announced that the Supreme Court was ditching Roe v Wade than so-called progressives were gunning for Thomas. They’ve never liked Thomas, who has been serving on the Supreme Court since 1991. Sure, he might be just the second African American to sit on the court, but for the identitarian elites he’s the wrong kind of African American, so his historic achievement doesn’t count. He’s Catholic – ‘decidedly and unapologetically Catholic’, as he says – and he’s not down with abortion or same-sex marriage. ‘Wait, I thought all blacks were BLM-supporting, pro-trans, sassy progressives like the ones I know from Twitter?’, you can almost hear the upper-middle-class left say. Thomas doesn’t compute for them. To paraphrase Biden, ‘He ain’t black!’.

And so it was inevitable he would get it in the neck following the fall of Roe. Vile racial hatred has been hurled his way since the ruling. Angry woke Twitter has even used the N-word. Thomas is ‘just another dumb field nigger’, said one tweeter. Another called him a ‘nigger slave’ to his white ‘nutcase’ wife. He’s a ‘coon-ass motherfucker’, apparently. And of course he’s an Uncle Tom. Or ‘Uncle Clarence’, as Samuel L Jackson called him. As a result, ‘Uncle Clarence’ trended online for hours. Welcome to the twisted moral universe of Silicon Valley, where you can be banned for life for saying ‘he’ about someone with a penis but you can happily surf a wave of retweets for using racial slurs about high-ranking black men.

This isn’t even the first time he’s been called ‘Uncle Clarence’. Joy Reid of MSNBC used that slur in 2020. It was recently revealed that the chair of the committee hearings on the 6 January storming of the Capitol – Democratic congressman Bennie Thompson – referred to Thomas as an ‘Uncle Tom’ on a New Nation of Islam radio show in 2014. It’s kind of ironic that a highly partisan hearing on the allegedly racist Orange Man should be headed by someone who happily gabbed with the Nation of Islam about the problem of ‘Uncle Toms’. In this charged woke atmosphere in which blacks can be publicly humiliated for deviating from what is deemed to be the correct thought for their race, it was inevitable that Thomas would be branded a rat, a ‘guttersniping Uncle Tom’ and someone who is ‘impersonating a POC’ in the social-media meltdown over Roe.

The poisonous belief that there is only one, correct way for black people to think is no longer the preserve of the radical fringe. It has become worryingly mainstream. Indeed, Biden’s ‘You ain’t black!’ line – which he said about black people who were considering voting for Trump rather than for him – suggests the White House itself might now be in the grip of the baleful racial determinism that passes for progressive politics these days. Black Trump voters were frequently talked about as race traitors. Remember when comedienne Chelsea Handler said she had to ‘remind [50 Cent] that he was a black person’ when he said he was thinking of voting for Trump? Whitesplaining, much? Here in the UK, the Guardian, voice of the chattering classes, has used the phrase ‘ministers with brown skin wearing Tory masks’ about the ethnic-minority members of Boris Johnson’s Cabinet. That’s just a wordy way of saying ‘Uncle Toms’.

Lurking behind this woke slamming of blacks who have the ‘wrong’ views, and behind the racialised animus heaped on Thomas in recent days, is a very ugly idea: that blacks belong to ‘progressives’. That blacks should be woke, or at least Democratic or Labour, in their outlook, and if they aren’t then there must be something wrong with them. They must have been ‘got at’, whether by their crazy white wives or by their own ‘field nigger’ instinct to please their mastahs in the elite. This is deeply demeaning to black people, whether it’s everyday voters or Justice Clarence Thomas, who, contrary to the racial prejudices of the woke set, are perfectly capable of coming to their own conclusions about politics and morality. It is an intrinsically racist idea, given it reduces an entire race of people to a monolithic bloc who must all think and behave in the same way. And if they don’t, they’ll be called the n-word.

A broader problem has been exposed by the overturning of Roe – the extent to which identity politics has corroded progressive politics as we once knew it. Battles that would once have been political in nature, and reasoned and rational too, have become petty, vindictive stand-offs motored more by identitarian grievance than by moral conviction. So alongside the racial shaming of Thomas, there have been protests outside the private residences of Supreme Court justices. The protesters used megaphones to call the justices wicked and hateful. These home protests that tended to focus on the justices’ alleged character flaws spoke to the shrinking of the political landscape, to the replacement of a clash of principles with increasingly personalised spats over who is good and who is evil. Even the pro-Roe set’s insistence that the new ruling will hurt women of colour most of all confirms that nothing can now be spoken of at the level of ideas, or of the state, or of the nation. No, everything must be reduced to race, to identity, to yet another tussle in the Oppression Olympics.

There are serious discussions to be had about what happens now, following the cancellation of Roe v Wade. Questions of liberty, morality and equality are raised by the new ruling. Yet it seems pretty clear that the noisy protagonists of today’s culture war lack the political and moral equipment to engage in such difficult, future-defining debates. So instead they hurl insults, play the victim card, and even yell the n-word at their opponents. What a dispiriting spectacle.