Why won’t we talk about the heroism of the Ukrainian people? 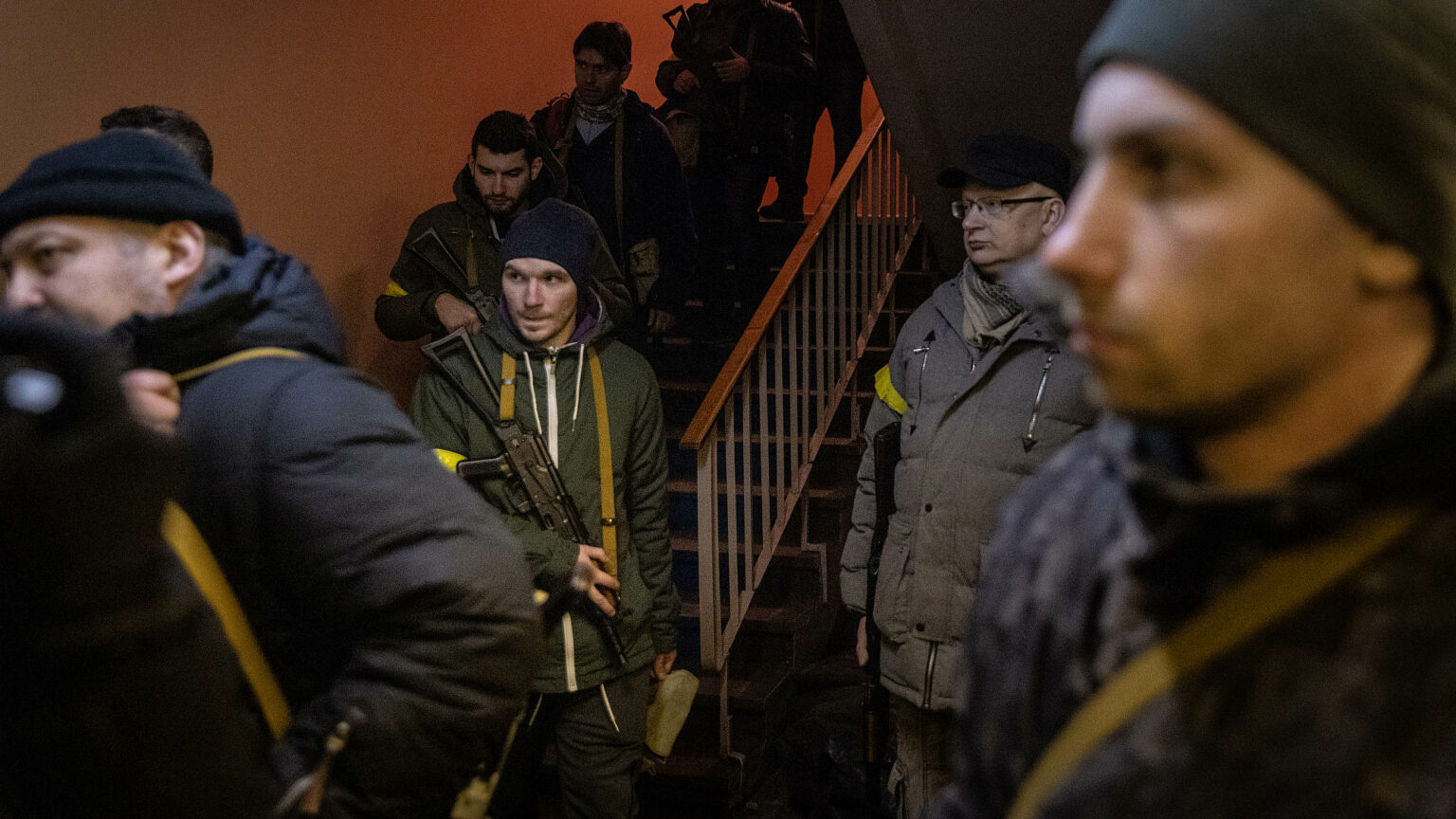 There is something strange and unsettling about the media coverage of the war in Ukraine. We talk about the war constantly but we never see it. Sure, we see parts of it. We see shaky mobile-phone footage of Russian missiles hitting buildings. We see burnt-out tanks. And of course we see columns of refugees. We see mothers puffy-faced from crying and children clasping battered dolls. We see that kind of thing – the terrible residue of war – all the time. But the actual war? It seems oddly absent. It’s almost as if the war is just the mise-en-scene, the backdrop to the stories the media really want to tell about the suffering of women and children, and the goodness of us in the West who are taking them in.

It increasingly feels as though our media elites have become so versed in the vocabulary of victimhood, so used to seeing everything in terms of suffering, pain, offence and ‘erasure’, that they have lost the ability to cover an event that is fundamentally one of agency. Which involves not just suffering, as all wars do, but also bravery, heroism, action. This is why so much of the media coverage focuses on the vast gatherings of Ukrainians in train stations and at the border, mainly elderly people, mothers and children, all desperately fleeing to Poland or Hungary or Germany or the UK. Because these are people who have been robbed of their agency. These are people whose autonomy has been fatally compromised. These are people whose ability to govern their lives has been suddenly and violently suspended. In short, these are people who pose no moral complication to the simplistic narratives of victimhood that have come to monopolise the 21st-century media.

As a result, we are receiving a highly filtered version of the war. There’s nothing new in that, of course. No war is reported on neutrally. Every foreign conflict comes to us through the prism of propaganda. But this time, it isn’t political ideology or Western chauvinism that is shaping the presentation of a war (though there are elements of both). No, it’s the cult of the victim, the modern trend for treating people as hapless casualties of circumstance requiring the therapeutic lift of external assistance.

This has reached caricatured levels in the media depiction of Vladimir Putin as a school bully and the Ukrainian people as his child-like victims. Putin is a ‘cruel and unhinged bully’ who is ‘angry he’s not getting his way’, says USA Today. He’s a ‘classic schoolyard bully’, says a Canadian professor. A writer for Forbes goes so far as to claim that the Ukrainian pushback against Putin’s forces contains ‘several universal truths about how to confront bullies in the office and elsewhere’. Our elites really cannot help but interpret the Russian conquest of Ukraine, and the Ukrainian people’s resistance, through the language of hurt and offence, and in this case even the petty managerial language of conflict resolution at work. It’s all they know.

The more the war goes on, the more the actors in it – in particular the fighters for the Ukrainian resistance – fade from the media coverage, melt into the mise-en-scene. In their place come the passive victims, the people who do not act in the war but rather are acted upon by it. And to the front, it’s children. Newspaper front pages splash images of brutalised kids, often with little regard for privacy. We have ‘taken the decision to publish [these] distressing photos to highlight the brutality and tragic consequences of the Russian invasion’, said the London Evening Standard when it put a photo of a dying six-year-old girl on its front page.

A Mirror front page focused on ‘THE INNOCENTS’ and said ‘Putin is a coward who kills little girls in slippers and unicorn pyjamas’. Again, war reduced to bullying; a deeply political conflict with global consequences turned into a case of a horrible man abusing little girls. ‘Show this to Putin’, said the front page of the Metro next to an image of suffering Ukrainian children. As if all Putin requires is the therapeutic jolt of seeing what his war has done to Ukraine’s citizens. This, too, speaks to the narrow, victim-oriented outlook of the media elites, who view Putin as psychologically disturbed and Ukraine as the battered child of his disturbances. The institutionalisation of the woke ideology of bullies and victims, of hierarchies of pain, of politics and history as things that are done to us rather than things we potentially do, seems to have left the media bereft of the intellectual and moral resources to treat a war as a war.

This has been a long time coming. Indeed, the BBC’s two most prominent reporters in Ukraine – Orla Guerin and Fergal Keane – have been honing their skills as documenters of pain for the past two decades. Their reporting is strikingly verbless. It describes not action, but consequence; not what has been done and why, but who it has been done to. It is nearly 20 years since Charles Moore noted Guerin’s preference for ‘sentences without verbs’: ‘The absence of a main verb allows her to evade the statement of a fact and concentrate on purveying an impression.’ Purveyors of impression – that is what war reporters have become in our post-political, post-agency age. As Adam Curtis once put it, the Fergal Keanes of the world ‘feed [us] these cubist blips of description. Dark. Dangerous. The horror.’ It all contributes, says Curtis, ‘to a feeling of being trapped in our heads and our emotions and a feeling of disconnection from a more political, physical world’. This is exactly what is happening in the coverage of Ukraine: the physicality of the war and the politics of the war play second fiddle to the impressions of pain provided to us by the journalist-as-therapist. The aim is not to increase our understanding of the conflict, but to incite a purely emotional response. Ukraine becomes fodder for our culture of feeling.

The sidelining of actors in a catastrophe, primarily men, in preference for focusing on women and children has been a key part of the journalism of feeling for some time. In her 1992 book, What is a Child? Popular Images of Childhood, photography expert Patricia Holland described how ‘men are rarely visible in the iconography of disaster’. Why? Because it is men who ‘signify culture’ and who are ‘least likely to conform to the expected image of the victim and the most likely to be involved in attempts at reconstruction or resistance’. For this reason, men ‘confuse the clarity of the story, complicating a reaction of pity alone’. And so they’re left out, not conspiratorially, not even fully consciously, but rather because our media that yearns for stories and images of suffering intuitively know that men – the fighters, the warriors, the reconstructors – must be bypassed if a simple tale of sorrow is to be successfully told. Early media coverage in Ukraine reported on the men signing up to fight (though even then it tended to focus on the very young men, barely out of their teens, and the fear they felt). But since then the men of Ukraine have notably disappeared from the frontline of our coverage; they’ve been invisibilised.

The entire resistance seems invisible now. We know it’s there. We know it’s scoring some stunning victories against Russia and its unprovoked war of aggression. Numerous Russian generals have been killed. Russia’s advance appears to have stalled at times. And some reports claim Russia is lowering its horizons in response to the unexpected ferocity of the Ukrainian resistance. And yet the resistance is rarely front and centre in the coverage. Which means it can feel like a phantasm. Almost a dream. ‘Who is achieving all of this?’, one could be forgiven for asking. ‘Why can’t the West admit that Ukraine is winning?’, asked Eliot A Cohen in the Atlantic last week. It’s because we have become too ‘accustomed over the past 20 years’ to thinking of ourselves and our allies as being ‘stymied, ineffective, or incompetent’, he said. The moral incoherence of the West, our dearth of fighting spirit and self-confidence, our trading-in of our belief in autonomy for an obsession with suffering, has unquestionably infected how we understand and talk about Ukraine.

The cult of victimhood has very real political consequences. In this instance it marginalises the sustained military rebellion of the Ukrainian people in preference for focusing either on the wickedness of Russia or the pain of Ukraine’s citizens. This has a potentially pacifying effect on Western audiences. We are invited not to feel stirred by Ukraine, but to feel horrified, to feel pity – debilitating emotions. Pity is the opposite of solidarity. Feelings of sorrow grate against the more active impulses to support and assist that were the hallmarks of internationalism. So the media infantilisation of Ukraine as a victim of bullying does not only negate the agency of the people of Ukraine currently fighting for their freedom – it also degrades our agency, through inviting us to feel emotions alone, to stay within our own minds, to view Ukraine not as a nation with whom we share the common cause of freedom, but as a sad, destroyed state that requires only our ribbons and our tears. Overturning victim politics is the first step to restoring our own agency, so that we might better cheer, celebrate and support the remarkable agency of the Ukrainian people.