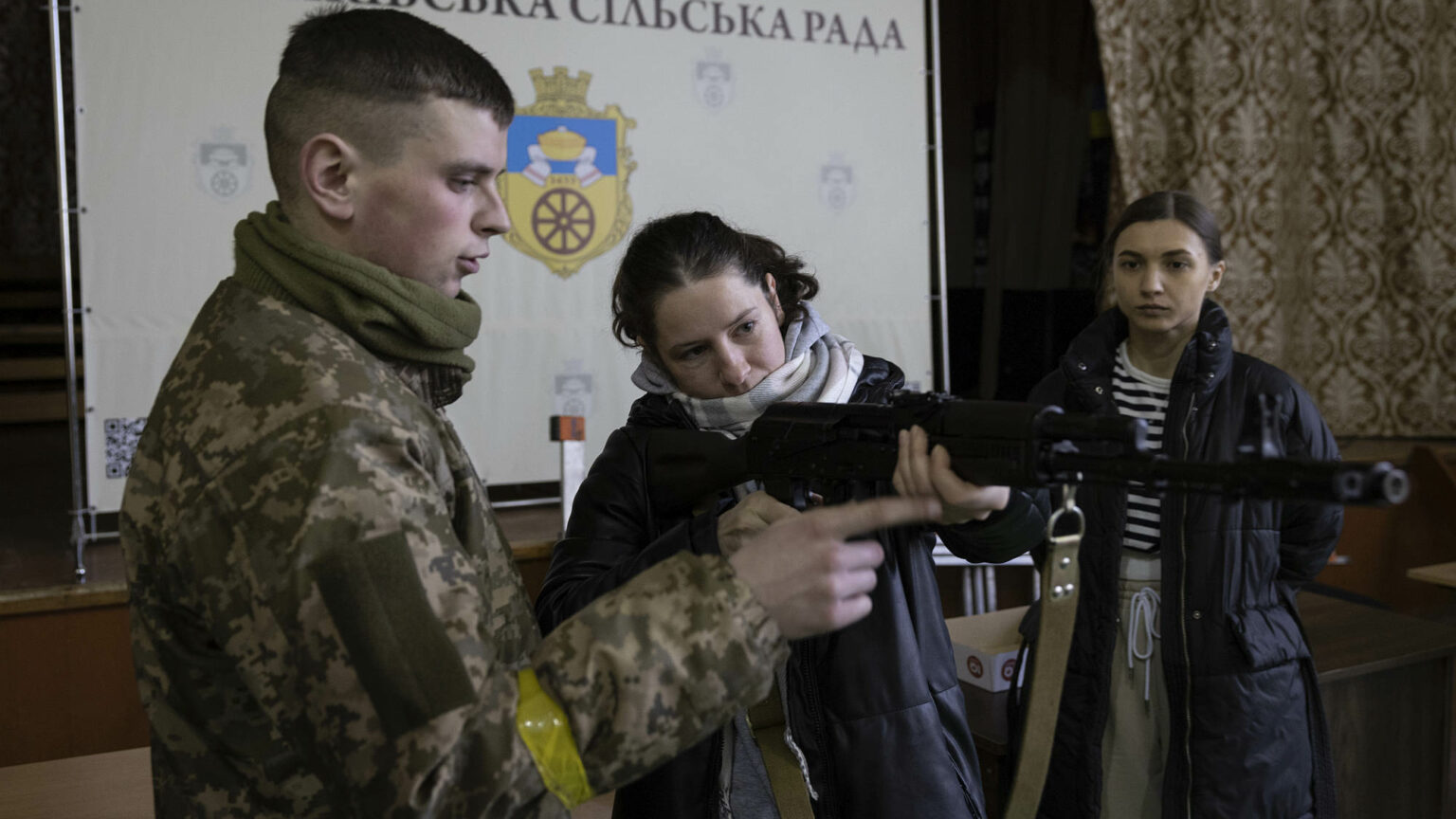 Is nothing worth a war?

The moral defeatism of the West stands in stark contrast to the valiance of Ukraine.

Of the millions of words uttered about the war in Ukraine, the most pertinent came from Olexander Scherba. He’s a Ukrainian diplomat. He was the Ukrainian ambassador to Austria from 2014 to 2021. And like other members of Ukraine’s political class, he has been doing the media rounds this past fortnight, eloquently making the case for his nation’s right to resist the Russian onslaught. A few days ago he took to Twitter to express irritation. ‘Every time I give an interview to Western media I get a feeling that they want us to give up’, he said. Then he posed a question that ought to make our commentariat engage in some serious self-reflection. What’s behind this moral defeatism infecting the media elites, he wondered? ‘[Is] it because they know they wouldn’t be fighting like us if they were in our shoes?’

There it is, the confronting question. Would we fight like the Ukranians have? Would you transform yourself, overnight, from a university professor or ballet teacher or bus driver into a soldier tasked with holding at bay the fourth largest army on Earth following just three days of military training? Mr Scherba clearly has a keen reading of the sentiments infusing much of the Western coverage of the war. There’s the sentiment of horror, of course. And there’s also the sentiment of exasperation, even of defeatism. Would it not be better if this war just ended? If Ukraine and Russia struck a deal? Even if it isn’t a perfect deal? Western media coverage is riddled with talk of the senselessness of the war, overlooking that for Mr Scherba and millions of other Ukrainians, nothing could be more sensible, more logical, and more right, than sacrificing almost everything to defend the independence of their nation.

The more the war goes on, the starker the contrast between Western moral defeatism and Ukrainian resolve becomes. The buzzword in much of the Western discussion is ‘realism’. On both sides of the discussion – among both those who support Ukraine’s fightback and those who obsess to the point of sympathy with Russia’s ‘security concerns’ – there’s a belief that ‘realism’ must now prevail. Over everything. Even over Ukraine’s sovereignty. As a pro-Ukraine writer for the New Republic puts it, ‘God bless the Ukrainians’ but ‘Russia will probably overpower Ukraine’. No wonder Mr Scherba is flustered, when even Ukraine’s supposed allies are essentially saying ‘Get real’. It is clear now that ‘realism’ is a euphemism for conceding, for surrender even. Whether it’s the ‘realists’ who admire the resistance but think it is hopeless, or the ‘realists’ of international-relations theory who believe Russia’s security concerns must trump the Ukrainian longing for freedom, there’s a palpable defeatism in the discourse. Only it dare not speak its name. It calls itself ‘realism’ instead.

To be clear, realism is important in war. There is no shame in a people under tyrannical assault deciding that they might have to negotiate in the interests of basic survival. If the leaders of Ukraine make such a decision in the next few days or weeks – having already witnessed the slaughter of 1,300 of their troops and around 600 of their citizens – that is their business and we should support them. But we need to distinguish between the practical realism of the Ukrainian leadership and the ideological ‘realism’ of Western observers. Between the tough calls leaders must make during war and the general lack of appetite for war among many of those watching this fight for freedom from afar. The former realism is grounded in legitimate questions about balances of power and military capacity. The latter ‘realism’ springs from something more amorphous, more craven – a belief that nothing, really, is worth fighting to the death for.

Of course the Western media commentary is not uniform. A divide has emerged between a kind of phoney bravado on one side and a baleful ‘realism’ on the other. There are the laptop bombardiers saying ‘Let’s shoot down Russian jets’, with not a second thought for what the consequences of such action would be, and the laptop realists who can see no way out of this war other than through accommodating to Russian concerns and encouraging Ukraine to be a neutral buffer zone – whether it wants to be or not – between West and East. Incongruously, however, both sides share something in common – a tendency to read this war through the prism of ‘realism’, through the narrow needs of the present. So Ukraine must either ‘realistically’ agree to become an outpost of NATO and the supposedly liberal order, or it must agree to ‘neutralise’ itself in order to pacify Russia’s concerns. Ukraine isn’t only under attack from Russia. It is also falling victim to TINA (There Is No Alternative) – to the dispiriting belief that history is a done deal and a nation’s only role now is to pick a power bloc to align with.

On the hollow bravado side, among those agitating for more Western backing for Ukraine, there is a constant downplaying of the interests and agency of the Ukrainian people. At the New Republic, Michael Tomasky even implies that the Ukrainians can throw the towel in now because they have already achieved something of world-historical importance – they’ve allowed the West to signal its virtue. ‘Even if Russia takes over Ukraine, the liberal order has won’, he says. ‘We have made a bold statement.’ Tomasky embodies the narcissism of the West’s armchair warriors for the ‘liberal order’ when he says we shouldn’t actually fight for Ukraine – ‘We are not obliged to go to war for democracy’ – but we should acknowledge the opportunity Ukraine has afforded us to ‘state [democracy’s] principles’. Here, the war is bent entirely to the narrow needs, the geopolitical realism, of Western capitals that are keen to isolate Russia and restore the ‘liberal’ hegemony. The important thing is not the right of the Ukrainian people to self-determination, but the ability of Western powers to send a message about themselves to the world.

Other supposedly pro-Ukraine observers have been even more cynical in their treatment of the war as a stage for self-aggrandisement. ‘Putin may succeed militarily in the near future’, says the Guardian’s Polly Toynbee, but don’t worry – ‘we’ have already scored some great victories in this war, such as reminding people that the BBC is ‘Britain’s greatest global influencer’, that we need to ‘accelerate renewables [and] home insulation’, and that ‘Britain’s destiny is European’. The 20-year-old Ukrainians on the frontline thought they were fighting for national freedom but actually they’re just the footsoldiers of our very own Hampstead set. Arch Remainer Paul Mason likewise hopes Brexit will be the chief casualty of the Ukraine war. Brexit has been ‘killed by the new geopolitical realities created by the war’, he says (my emphasis). To these political narcissists, the Ukrainian people are a mere proxy army for their own petty concerns. They’re the militant wing of Remoanerism. Ukraine’s struggle for freedom is made subservient to the liberal realism that views tackling populism as the No1 priority of our age.

On the other side, there are the ‘realities’ of those who sympathise a little more with Russia. Ukraine must recognise Russia’s security concerns, they say, following two decades of NATO expansion eastwards. There is no doubt, as spiked has discussed at length, that the current crisis has been exacerbated by the provocative behaviour of NATO in recent years. But surely we can describe why Russia has concerns without fetisishing those concerns, without treating them as fixed historical facts that the Ukrainian people must now genuflect to. We ‘shouldn’t rush to dismiss Vladimir Putin’s latest peace terms’, said one observer after Russia issued a list of demands, including that Ukraine recognise Crimea as Russian territory, recognise Donetsk and Lugansk as independent states, and alter its constitution to foreswear joining any Western-orientated bloc, like NATO or the EU. The outcome of the Ukraine crisis must be ‘tempered by the considerations of reality’, says another writer. In short, we should encourage Ukraine to make concessions, and it is not ‘rewarding Russian aggression’ to do so.

The supposedly pro-Ukraine commentariat tells Ukraine to bend to the realism of the liberal order, while those sympathetic to Russia’s concerns tell Ukraine to bend to the reality of the new multipolar order. In both cases, Ukraine is being urged to shape itself according to external concerns rather than the inner logic of its own struggle for freedom. It is being pressured to accommodate with the settled histories of the post-Cold War era – whether that’s the historical reality of the post-Soviet expanding Western order or the historical fact of the withering of American hegemony and the emergence of new global powers and concerns. This nation is being told to capitulate to the inexorable forces of history rather than to make its own history through its struggle against an invading army and its assertion of its sovereign rights. Neither of the ‘realist’ sides is willing to admit that they essentially want to hem Ukraine in, to impede its national rights, either by reducing it to an outpost of anti-populist global technocracy or by telling it that it must allow Moscow to rewrite its national constitution in a devastatingly restrictive fashion. I’m against the EU, but I’m even more against the idea that a free nation should be forbidden by an external power from joining the EU.

As I said, realism matters. If Russia ups the ante, Ukraine might have little choice but to rethink, to seek peace, to save lives. But let us not overlook the creepy impetus behind much of the Western pressure on Ukraine to ‘give up’, in Olexander Scherba’s words. It’s easy for me to say, I know, but aren’t there some things more important than peace and stability? Like a people coming together to fight for that most cherished of political values – democratic sovereign rights? ‘War is an ugly thing, but not the ugliest of things’, said John Stuart Mill. ‘The decayed and degraded state of moral and patriotic feeling which thinks that nothing is worth a war is much worse.’ (My emphasis.) The freedom of the Ukrainian people is worth a war. Democracy is worth a war. We used to know this – we don’t any longer. If the Ukrainian people feel this fight has become too much, we should understand that. Until then, we should back their war of resistance and call the agitation for their surrender by its true name.