The Remainers were wrong about literally everything

Every smug pronouncement from these know-it-alls has disintegrated on contact with reality. 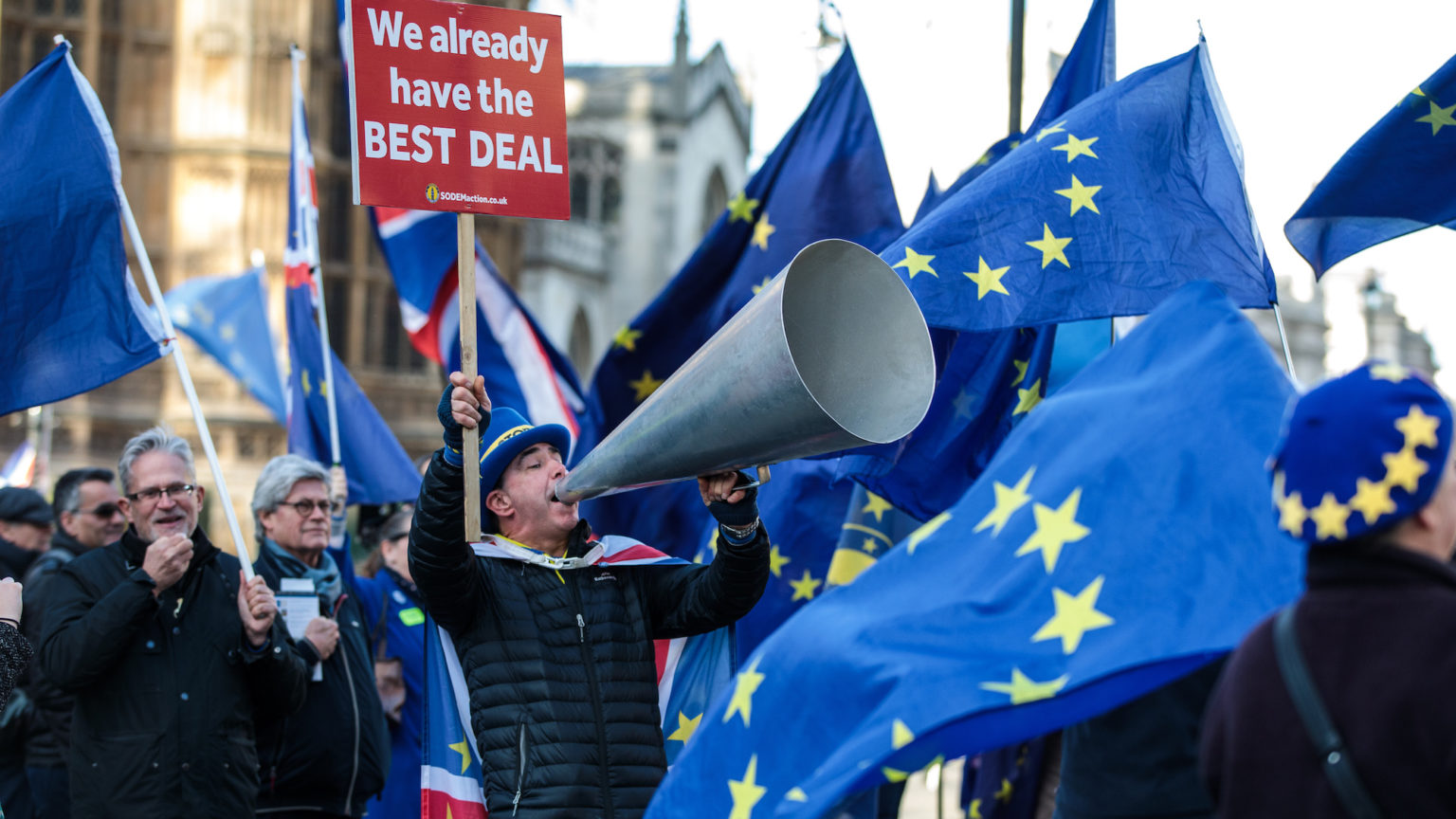 A long and painful chapter for Britain’s chattering classes has finally drawn to a close. The European Parliament has voted to ratify the Brexit trade deal – finally snuffing out the last vestiges of Remainer hope.

It’s the final nail in the coffin for Project Fear, which presented Brexit as an unmitigated disaster. Remainers were sure there was no easy way out of the EU – but events since 2016 have put paid to countless dire warnings about Brexit armageddon.

In the eyes of the Remainer elite, it was totally obvious to anyone with half a brain cell that Brexit would be a disaster. EU fanatic James O’Brien summed up this arrogance when he wrote a book called How to be Right, and a follow-up called How Not to be Wrong. Fellow anti-Brexit bore Fintan O’Toole captured this, too, with books titled Heroic Failure: Brexit and the Politics of Pain and Three Years in Hell: The Brexit Chronicles. But in the end, the Remainers ended up getting pretty much everything wrong. Let’s look back on some of their most spectacularly botched predictions and miscalculations.

‘Businesses will flee the UK’

Remainers were convinced Brexit would force countless businesses to move overseas. They were certain that the manufacturing industry in the Leave-voting north would collapse, confirming the stupidity of voters there once and for all. When reports arose that car manufacturer Nissan would move some production overseas – out of the Leave stronghold of Sunderland – Remoaners seized on the bad news. The exodus had begun, and the thick, racist northerners were reaping what they sowed.

Observer writer Carole Cadwalladr said the voters had been duped: ‘Sorry for your loss, Sunderland. You were lied to. By a campaign that can’t prove it was legally funded or even British.’ Some Remainers even gloated at the news, with one novelist tweeting, ‘Bet you are not laughing today if you work at Nissan. You were warned.’

But like so many prophecies of Brexit-induced doom, fears that Nissan would shut up shop in Sunderland did not bear out in reality. In fact, Nissan said this year that Brexit is an advantage for the company – and it has committed to creating more jobs in the UK. Ashwani Gupta, Nissan’s chief operating officer, said: ‘Brexit for Nissan is a positive. We’ll take this opportunity to redefine the auto industry in the UK.’ Nissan has also announced plans to manufacture car batteries in the UK rather than import them from Japan.

Brexit Britain is attracting new investment. According to financial consultancy Bovill, around 1,000 EU firms are considering opening new offices in the UK. Economic projections from the IMF (which strongly opposed Brexit) now show there has been no negative impact on economic growth from leaving the EU. In fact, Britain’s growth is expected to be higher than the rest of the EU’s in the coming years.

Not only were Remainers certain that jobs would evaporate as companies fled to better climes. They were also certain that the UK would lose out on huge amounts of trade with Europe.

But although exports to the EU fell in the months following the transition period, they have already recovered. Imports remain down, but they are catching up, too. Who’d have guessed that the EU would still want to do business with one of its biggest trade partners post-Brexit?

‘Brexit will make us ill’

Many Remainers were convinced that Brexit would be a disaster for the nation’s health. Some warned hysterically that trade barriers could even lead to a shortage of medicines. Back in 2019, the then chief medical officer, Dame Sally Davies, warned bluntly that Brexit put lives at risk.

Other ‘experts’ entertained the ludicrous fear that Brexit would unleash a wave of infectious diseases across the UK – including super-gonorrhoea – unless Britain maintained close health cooperation with the EU.

Of course there was an outbreak of infectious disease in the form of Covid. But this had nothing to do with Brexit. In fact, Brexit has helped the UK fight the pandemic – because the UK rightly avoided signing up to the EU’s ultimately disastrous Covid vaccine programme. Of course, Remainers wailed that lives would be lost if we didn’t stick with the EU programme. Lib Dem health spokeswoman Munira Wilson called the decision ‘unforgiveable’, and fellow Lib Dem Layla Moran moaned that the government was putting ‘Brexit over vaccines’. But thanks to opting out of the EU’s car-crash programme, the UK is now miles ahead of every EU member state in vaccinating its people.

Brexit did seem to affect Remainers’ mental health, however. Some actually admitted that Brexit had sent them potty: the Metro ran an article in 2019 with the headline, ‘Brexit has triggered my anxiety and depression – and I’m not the only one’. It was clearly a challenging few years for Remainers’ sanity. Brexit Derangement Syndrome led Labour MP David Lammy to ask if Dominic Cummings was a Russian spy. And Green MP Caroline Lucas ended up advocating a Remainer coup, demanding the replacement of the elected government with an all-female ‘emergency cabinet’ of Remainers.

‘Brexit can be reversed with a People’s Vote’

Remainers were sure that they would win the 2016 referendum. The man who called the vote, David Cameron, was so confident that he reportedly ordered the civil service not to prepare for a Leave victory. But losing the vote wasn’t Remainers’ only electoral embarrassment. Many also campaigned tirelessly for a second referendum – or a ‘People’s Vote’, as they insisted on calling it.

And this time, they really would win it. After all, they had time on their side, right? Old Leave voters were dying off, and the country was becoming more pro-EU as a result, they claimed. The Metro even boldly declared on 19 March 2019 – the day John Bercow blocked Theresa May from bringing her Brexit deal before the Commons for a third time – that ‘Britain turns Remain today as more elderly Leavers die’.

At the last election, the Labour Party took up the People’s Vote cause, hoping to capitalise on this allegedly burgeoning desire to reverse Brexit. In the end, Labour suffered its worst electoral defeat since the 1930s. The Conservatives, meanwhile, won an historic victory under the mantra of ‘Get Brexit Done’.

Two years on, with Brexit a reality, polling shows that more people want to stay out than rejoin. Remainers never got their People’s Vote. But perhaps they were lucky to avoid another humiliation at the ballot box.

‘Change UK will shake up politics’

In 2019, a new force emerged to break the Brexit deadlock: Change UK. A political supergroup made up of some of Labour’s and the Tories’ most die-hard Remainers. The press covered its arrival with great excitement and commentators wondered whether the two-party system might finally be on the ropes.

For Ian Dunt, author of Brexit: What the Hell Happens Now?, there was ‘no reason this [couldn’t] succeed’. For the Guardian’s Jonathan Freedland, the group really could ‘change our politics’.

But it all ended in tears. At the 2019 European Parliament election, the group got just 3.3 per cent of the vote. In the 2019 General Election, its few remaining MPs (the rest had defected to other parties by then) got a paltry 10,000 votes between them. Not a single one of the MPs who originally joined Change UK – including those who jumped ship and stood as Lib Dems – retained their seat after the election. Less than a year after forming, the group dissolved and was consigned to the dustbin of history.

Elite Remainers thought they had a right to rule. They thought their knowledge of politics, economics and the EU made them superior. But events since the referendum have shown how divorced these people are from reality. They should never be allowed to forget it.