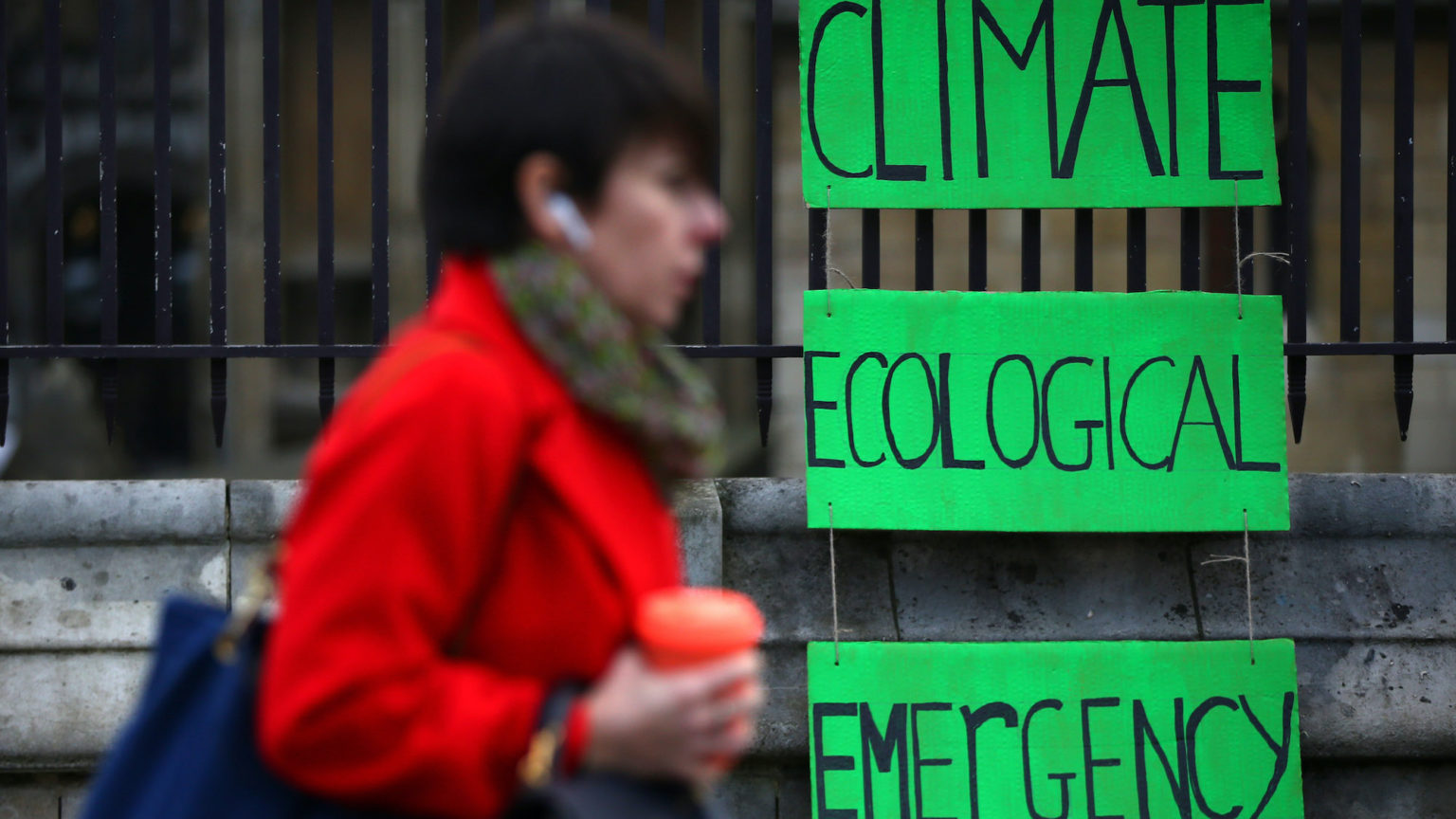 Over the past year, the response to the Covid-19 pandemic has caused untold damage to people’s lives. Discussing whether draconian policies are effective, or whether there may be other ways of managing the crisis, has been muted by angry ripostes – you will be branded a ‘denier’ or a ‘granny-killer’. To disagree is to have blood on your hands.

But surely, despite these tensions, most people want the whole thing to be over? It doesn’t seem so. One tendency seems to hope that lockdown is just the dawn of an age of confinement. Greens, after a year at home on full pay, believe this is the beginning of a bright new era of global environmental consciousness and good international governance, in which lockdown will be the norm.

The question at the centre of this bizarre, anti-human dystopianism is, ‘Will Covid help us save the planet?’. That was asked by last Sunday’s edition of the BBC’s Big Questions. spiked’s Fraser Myers, outnumbered by George Monbiot, Extinction Rebellion activists and neo-Malthusian population-obsessives, appeared on the show. He was interrupted every time he tried to counter the greens’ celebration of locking people in their homes. Such is the BBC’s absorption into the green and lockdown orthodoxies that it apparently could not find, in a population of 65million people, more than one dissenting voice.

For Monbiot, the logic of lockdown was simple enough. ‘What we’ve discovered with the pandemic is that when people are called upon to act, they’ll take far more extreme action than environmentalists have ever called for’, he said. In Monbiot’s view, all that was required to elicit the obedience of the population was for the government to make it ‘abundantly clear that we have to do this for the good of all’. But this is not true.

If it were true, there would not have been the need to pass emergency legislation, to force businesses to close, and to abolish gatherings, including protests, all under threat of fines of up to £10,000. Which is far in excess of what most people could afford without serious consequences, including the loss of their home. Moreover, there are countless reports of local authorities and the police failing to understand the regulations they were enforcing and exceeding their authority. People have stayed at home because there was nowhere to go to, and nothing to do, and because they do not want to break the law, and because they have been terrified of the virus. A July survey of British people’s estimation of the deaths caused by Covid found that (excluding ‘don’t know’) they overestimated the number of fatalities by up to 10 times. A third overestimated by 10 to 100 times, and 15 per cent overestimated by over 100 times.

Rather than seeking to allay unfounded fear, and despite their putative emphasis on ‘The Science’, lockdown hawks capitalised on this overestimation of risk to fuel their cheap, utilitarian moral arithmetic. This may have been effective during this pandemic, in which threats are perceived as immediate, and the lockdown is presented as an extraordinary measure with an end in sight. But a climate lockdown would be forever. And in order to sustain it, the green misanthropes would need to take even greater liberties with the facts and stats.

According to Monbiot, ‘billions’ of people will soon suffer from climate change. But in reality, even the most dramatic projections suggest that for a long time – that is, centuries – climate change will be undetectable, except in meteorological statistics at the broadest, global level. Attempts to measure fatalities attributed to the consequences of climate change have been beset by radical, historically unprecedented improvements in society. If there is a link between climate change and fatalities, then it is only possible to conclude that climate change has saved countless millions of lives. In order to sustain the notion of climate change as a grave risk, researcher-advocates have had to invent counterfactual worlds, in which there is no global warming, to claim that risks in this, the real world, are indeed increasing, despite material evidence to the contrary: the fact that we are living longer, healthier, wealthier lives.

It is the ‘wealthier’ part that really bothers the greens. ‘There’s all this conversation that assumes that we can have whatever we want and make tiny little changes in our lifestyles and that will be enough’, said UCL population ethicist Karin Kuhlemann on The Big Questions. ‘I do not think people will change their relationships to the natural world. They won’t restrain consumption willingly. We need to dramatically reduce our impact on this planet.’ How? ‘People have to understand that just because you can do something because it’s available to you… doesn’t mean that you should do it.’ The ‘it’ in question, of course, is having children, which ‘creates lifetimes of consumption’ that are apparently not sustainable for the ‘planet’.

Some greens have been excited about how great lockdown is since last March. They wrote, from the comfort of their nice homes, on their full pay, about how fresh the air was, how clear the skies, and how prominent the birdsong. It was Kuhlemann’s colleague at UCL, Mariana Mazzucato, who in September really spelled it out: ‘Under a “climate lockdown”, governments would limit private-vehicle use, ban consumption of red meat and impose extreme energy-saving measures.’ In order to save ourselves from this fate, ‘we must overhaul our economic structures and do capitalism differently’, she claimed.

It is hard not to notice that academics’ demands for radical changes to society are invariably underpinned by threats. Like many greens, Mazzucato claims that ‘Covid-19 is itself a consequence of environmental degradation’, and that this makes the reorganisation of society an imperative on which many millions of lives depend. This is simply not true. According to Our World in Data, the global burden of communicable, maternal, neonatal and nutritional diseases fell from 471million DALYs (disability-adjusted life years) in 1990 to 288million in 2017. In 1990, 82,000 DALYs per 100,000 people were lost to diseases of all kinds in low-SDI (Socio-Demographic Index) countries, but this fell to 47,000 by 2017. The reason for this progress is made explicit by a plot of communicable disease burden against per capita GDP. Wealth is by far the greatest vaccine.

The obvious consequence of Covid and climate lockdowns, then, would be to reduce our ability to respond to actual emergencies, to spend on healthcare and public-health measures. It seems clear that green thinking is first and foremost driven by authoritarian impulses, which are subsequently given only a superficially plausible rationale. That is to say that the desire to reorganise society, which depends on hollow critiques of consumer and corporate capitalist society, exists prior to the facts, and yet are traded in the public sphere as obviously true, unimpeachable facts. No doubt, there are problems with the objects that animate greens’ and neo-Malthusians’ worldview: consumerism, ‘neoliberalism’, and the inauthenticity of (post)modern life. But the idea that they have driven us to the point of material crisis – from the weather, from diseases or from Gaia herself – is simply bullshit. Despite Covid and despite climate change, we have never been so safe, and the world has never before seen as much progress as it has since 1990.

Seen from this perspective, green demands for climate lockdown should be viewed as a greater risk to us than infectious diseases and extreme weather. The only way they can make their arguments for a ‘better world’ is to fantasise about saving us from imminent crises. They cannot actually offer anything positive at all.

Society has failed to grasp the extent to which green imperatives are ideological fantasies. Green claims are routinely taken at face value, rather than interrogated, to see what kind of world greens really want. One thing we can be sure of now, however, is that as soon as the climate lockdowners get what they want, they will simply move the goalposts. In December, the Guardian’s global environment editor, Jonathan Watts, claimed that, despite nearly a year of grounded flights, immobilised cars, a loss of 10 per cent or more of GDP, and a record plunge into further debt, lockdown had not done enough and was ‘too short to reverse years of destruction’. Now we know what lockdowns look like, it should sharpen our minds to the danger not from climate change, but from environmentalism.