Now the supporters of cancel culture are being cancelled

We warned you this would happen. 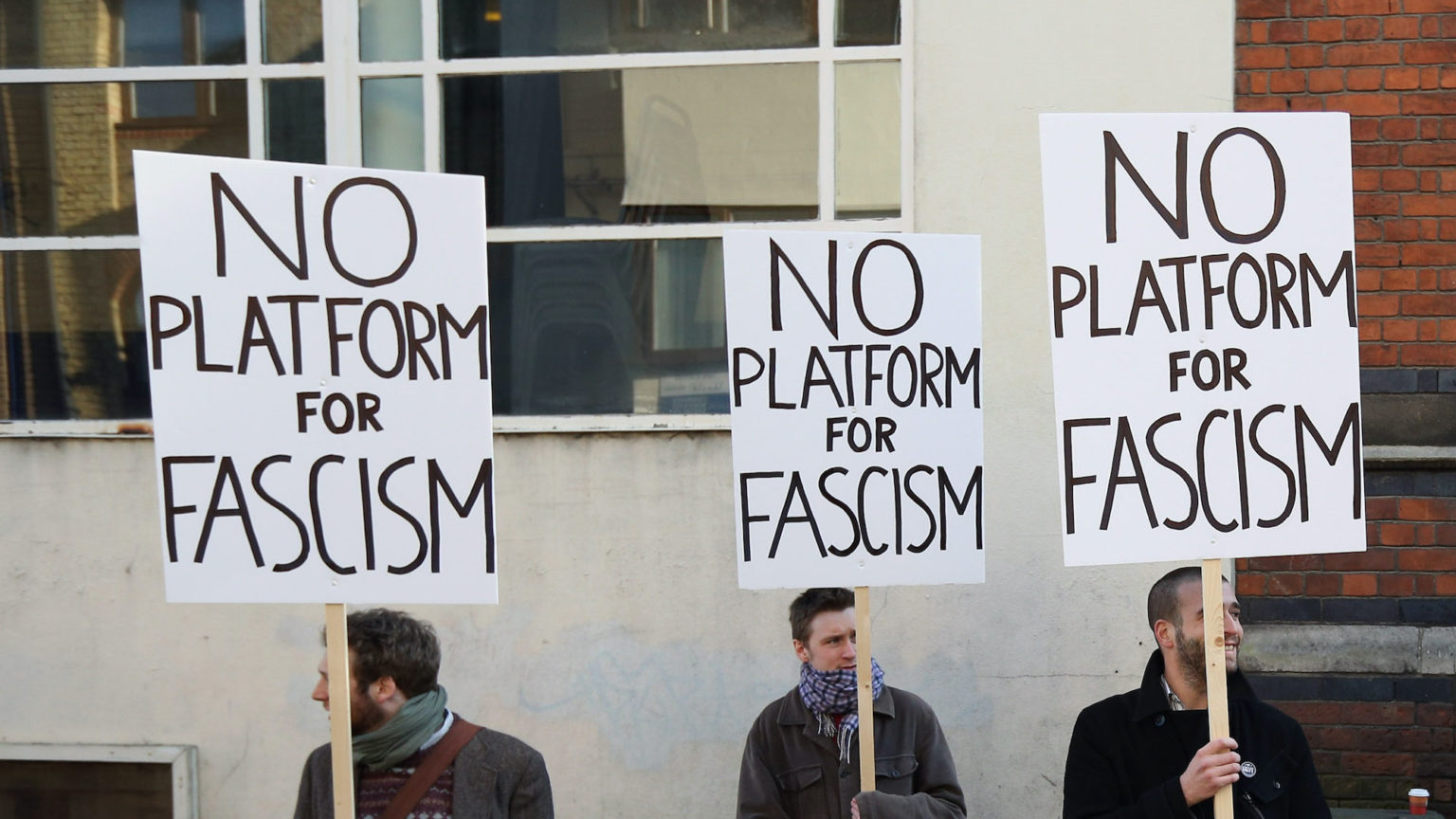 ‘Freeze peach!’ That has long been the mocking, infantile cry of the middle-class left whenever anyone complains about clampdowns on freedom of speech. There is no ‘free-speech crisis’, radicals insist. No Platforming right-wingers on university campuses is not censorship – it’s just students freely choosing not to associate with people who have horrible views. And alt-right types being turfed off Twitter and Facebook is not censorship, either – that’s just private companies enforcing their terms and conditions. (Who knew lefties were so supportive of private property rights?)

Will these censorship deniers change their tune now that the left itself is coming under censorious attack? Amazingly, probably not. But perhaps there will be a smidgen of self-reflection. Some of the left-wing architects and cheerleaders of contemporary censorship, including Britain’s Socialist Workers Party, which has backed the No Platform policy for decades, are now being No Platformed themselves. ‘This is a disgrace!’, they cry, which would be funny if censorship were not so serious. These people helped to build the infrastructure of modern censorship, with its determination to crush ‘hate speech’ and ‘offensive’ views, and now they’re shocked to find themselves falling victim to it? Have they not read any history books at all?

On Friday, the SWP, one of the largest left-wing organisations in the UK, was taken off Facebook. The party’s own page was removed and so were the pages of dozens of SWP activists. The SWP described FB’s actions as a ‘silencing of political activists’. They’re right. This was a unilateral act of ideological censorship carried out by the capitalist elites of Silicon Valley against a perfectly legal party based in the UK. It demonstrated the terrifying power of the Big Tech oligarchy, which clearly has no respect whatsoever for borders, territory or democratically made national laws and feels that it can reach into any nation state it chooses and switch off the oxygen of publicity to any party, group or individual it disapproves of. The attack on the SWP was indeed a disgrace, and it’s good that the SWP’s FB pages have now been restored.

But there is something spectacularly hollow about the SWP’s complaints. The SWP has played a key role in promoting No Platform policies on campus, which essentially blacklist certain groups and individuals from speaking to students, whether that’s leaders of actual racist organisations, like Nick Griffin, or decent, liberal securalists like Maryam Namazie (perversely branded ‘Islamophobic’).

What’s more, the ideological justifications that the SWP and other leftists have put forward for these acts of censorship – the idea that ‘hateful’ speech must be suppressed, the idea that offensive ideas are wounding, the nasty patrician notion that minority groups need to be protected from difficult discussion by the authorities – have helped to shape the broader, off-campus culture of censorship. Modern ‘hate speech’ laws and police interference in discussions about genderfluidity and other difficult topics, as well as Silicon Valley’s embrace of ever-tighter restrictions on ‘hate speech’ and its No Platforming of right-wing presidents or feminists who say ‘he’ when referring to someone who has a penis – all of this has been influenced by the modern left’s cultivation of a new form of therapeutic, paternalistic censorship that is designed to protect allegedly vulnerable individuals from the hurtful ideologies of right-wingers, critics of Islam, ‘transphobes’, etc etc.

So for the SWP now to complain about being No Platformed is rich indeed. Did these people seriously believe they could nurture a policy of No Platform and that it would only ever be applied to people they dislike? To think in that way shows a grave ignorance of history. It is more than 200 years since the great radical Thomas Paine observed that, ‘He that would make his own liberty secure must guard even his enemy from oppression; for if he violates this duty he establishes a precedent that will one day reach to himself’. SWP, you established a precedent, a precedent of platform removal, and now it has reached you. Why are you shocked? Tom Paine told you this would happen. So did many other warriors for liberty over the centuries.

Or surely our friends in the SWP have read some Trotsky. In 1938, he ridiculed leftists in Mexico who were seeking to ‘curb’ reactionary right-wing voices, ‘either by submitting [them] to censorship or by banning [them] completely’. Any leftist who ‘arms the bourgeois state with special means to control public opinion’ is a fool, said Trotsky. Worse, he is a ‘traitor’. Why? Because he should know that powers used against your enemy might one day be used against you. We should know from ‘historic experience’, he said, that ‘any restriction to democracy in bourgeois society is eventually directed against the proletariat’.

What would he have made of the buffoons in the Socialist Workers Party who failed to see that empowering university authorities, governments and even capitalists to curb ‘extremist’ right-wing voices would one day backfire and lead to the curbing of ‘extremist’ left-wing voices too? Once you accept the logic of censorship – the logic that says some ideas are too dangerous for public expression – you immediately open yourself up to censorship. It is astonishing that some people still don’t realise this.

Much of the left has actively cheered Silicon Valley’s growing willingness to banish ‘problematic’ voices. They ignored those of us who pleaded with them to recognise the folly of empowering unelected, unaccountable capitalist elites to exercise such control over what is essentially the public square of the 21st century – social media. Left-wingers celebrated the removal of everyone from alt-right loudmouths to principled feminists like Meghan Murphy, from nobodies spouting abuse from their bedrooms to the freely elected president of the United States, never twigging that they were laying the foundations for their own censorship.

And it isn’t only the SWP. Many other lovers of cancel culture now find themselves cancelled. Some Antifa pages are being removed from social media. Will Wilkinson, a contributor to the New York Times, was sacked from the think-tank the Niskanen Center after joking on Twitter that ‘If Biden really wanted unity, he’d lynch Mike Pence’. Mr Wilkinson has previously made light of cancel culture; now he is swallowed up by it. Meanwhile, YouTube has taken down the channel of La Marea, a leading left-wing website in Spain, on the grounds that its critiques of anti-refugee campaign groups were ‘inciting hatred’. Again, one must ask the left: did you really think that handing the powers-that-be the moral and technological power to censor and punish ‘hatred’ wouldn’t blow back against you?

It’s tempting to engage in Schadenfreude. Agitators for censorship being censored. Supporters of No Platform having their platforms removed. Mockers of the idea of cancel culture being cancelled. But of course, this is too serious for Schadenfreude. What we need to do is reiterate, loudly, this very simple point about freedom of speech: it is either enjoyed by everybody or it is enjoyed by nobody. The clue is in the name: freedom of speech. All must have it, from the ‘dangerous’ to the polite, from the right to the left, from fascists to saints, from American presidents who claim the election was stolen from them to Iranian theocrats who say menacing things about Israel, from trans activists to feminists who think transgenderism is a load of bollocks. Everyone.

The freedom to say only things that the state, Silicon Valley or the SWP approves of is not freedom at all. We need full freedom of speech, unfettered by state interference, capitalist-class meddling and cancel-culture mobs, in order that everyone may express themselves and, more importantly, that everyone else may weigh up what is being said and decide for themselves if it is right or wrong, good or bad. As the SWP and others must surely now realise, if you set the trap of censorship, it will one day ensnare you. The solution is clear: defend liberty of thought and speech for all, including your enemies.