Twitter’s suspension of Donald Trump is a chilling sign of tyranny to come. 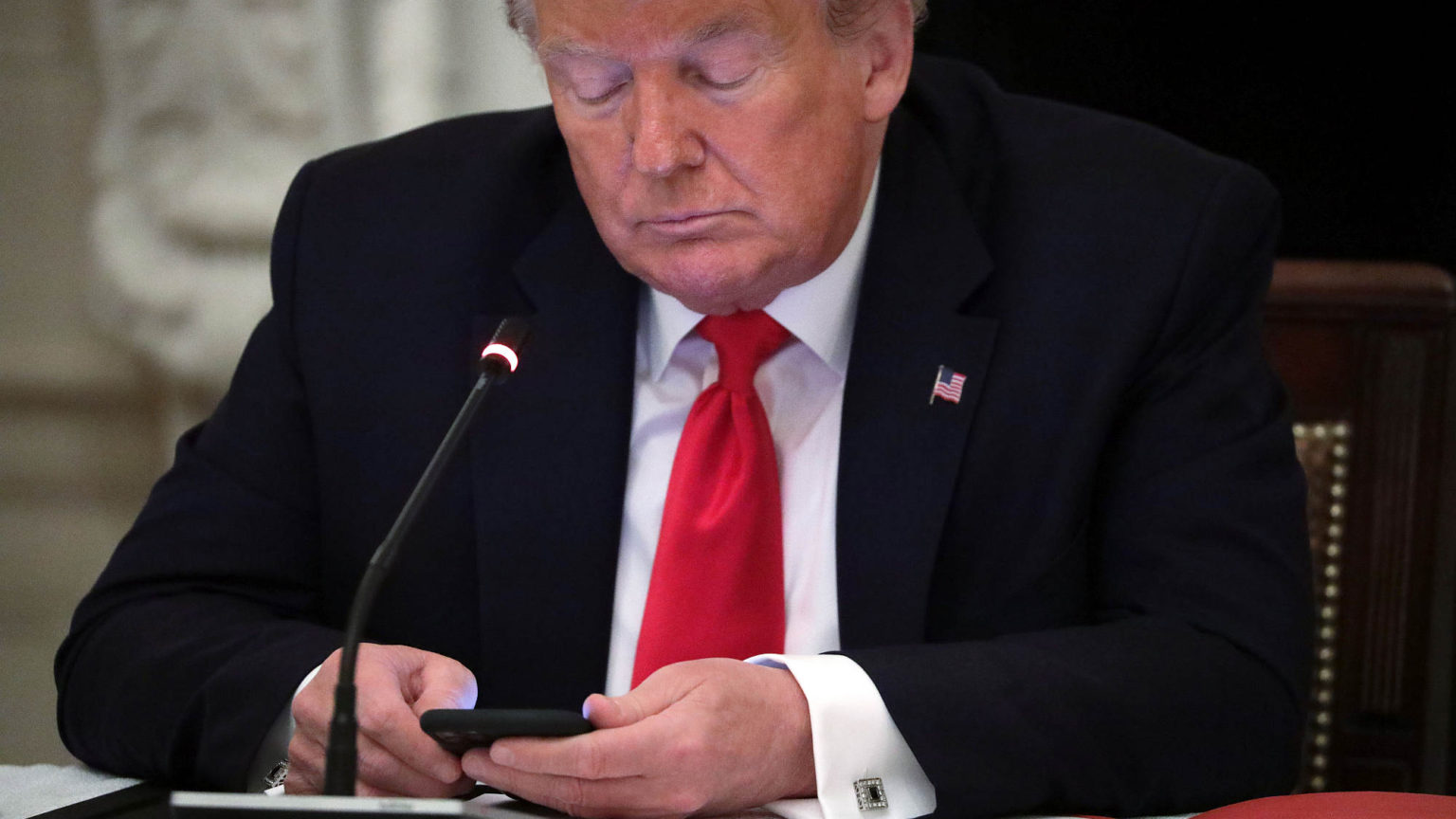 Cancel culture doesn’t exist, they say. And yet with the flick of a switch, billionaire capitalists voted for by precisely nobody have just silenced a man who is still the democratically elected president of the United States. With the push of a button in their vast temples to technology, the new capitalist oligarchs of Silicon Valley have prevented a man who won the second largest vote in the history of the American republic just two months ago — 74million votes — from engaging with his supporters (and critics) in the new public square of the internet age.

Not only does cancel culture exist — it is the means through which the powerful, unaccountable oligarchies of the internet era and their clueless cheerleaders in the liberal elites interfere in the democratic process and purge voices they disapprove of. That’s what Twitter’s permanent suspension of Donald Trump confirms.

The new capitalists’ cancellation of the democratically elected president of the United States is a very significant turning point in the politics and culture of the Western world. We underestimate the significance of this act of unilateral purging at our peril. It demonstrates that the greatest threat to freedom and democracy comes not from the oafs and hard-right clowns who stormed the Capitol this week, but from the technocratic elites who spy in the breaching of the Capitol an opportunity to consolidate their cultural power and their political dominance.

Twitter’s ban on Trump is extraordinary for many reasons. First, there’s the arrogance of it. Make no mistake: this is the bosses vs democracy; corporates vs the people; exceptionally wealthy and aloof elites determining which elected politicians may engage in online discussion, which is where most political and public debate takes place in the 21st century. Those who cannot see how concerning and sinister it is that a handful of Big Tech companies have secured a virtual monopoly over the social side of the internet, and are now exploiting their monopolistic power to dictate what political opinions it is acceptable to hold and express in these forums, urgently needs a wake-up call.

Secondly, there is Twitter’s deeply disturbing justification for why it suspended Trump. It says Trump’s account ran the ‘risk’ of ‘inciting violence’. And yet the two tweets of his that it cites do nothing of the sort. In one, Trump describes his voters as ‘great American patriots’ and insists they will have a ‘GIANT VOICE’ in the future. In the other he confirms that he will not be attending the inauguration of Joe Biden. That’s it. In what warped moral universe can such standard, boastful Trump-made statements be interpreted as calls for violence?

In the warped moral universe of pre-emptive, precautionary censorship being built by our tech overlords, that’s where. Strikingly, Twitter says its censorship of the president is based on how other people might read and interpret his words. It says its censorious motivation is ‘specifically’ the question of ‘how [Trump’s tweets] are being received and interpreted on and off Twitter’. Trump’s comments ‘must be read’ in the broader context of how certain statements ‘can be mobilised by different audiences’, Twitter decrees. So Trump’s words, strictly speaking, are not the problem; it’s the possibility, the risk, that someone, somewhere might interpret them in a particular way.

This sets a terrifying precedent for the internet age. It legitimises a new regime of online censorship which doesn’t only punish inflammatory speech — which would be bad enough — but which punishes normal, legitimate political speech on the grounds of how other, unnamed people or groups might respond to it.

There would be no end to what could be censored. Trans-sceptical feminists, already victims of Silicon Valley’s woke purges, would be completely wiped out on the basis that some idiot might interpret their intellectual, non-bigoted critiques of genderfluidity as an instruction to bash a trans person. Christians sceptical of gay marriage, pro-life campaigners furious about abortion, radical leftists who say ‘smash the system’ — all could potentially fall foul of this new diktat that says we are not only responsible for what we ourselves think and say, but also for the myriad interpretations that everyone else, from the man in the street to the weirdo incel, makes of what we think and say.

On this basis the White Album should be banned, given its songs ‘Helter Skelter’ and ‘Piggies’ were ‘mobilised by different audiences’ to terrible ends — the killings carried out by Charles Manson’s Family. Catcher in the Rye? Censor it. Don’t you remember how it ‘mobilised’ Mark David Chapman to kill John Lennon? As for the Bible, the Koran and any number of political texts and anthems — the risks of ‘mobilisation’ that they pose are clearly too great, so, to be on the safe side, let’s scrub those too.

It isn’t just Twitter. Mark Zuckerberg (zero votes) had already indefinitely suspended Trump (74million votes) from Facebook. Reddit has scrubbed its Donald Trump thread. All social-media accounts that promote the mad Qanon conspiracy theory are being suspended. Mike Flynn and Sidney Powell have been banished from Twitter. YouTube is now banning any video and account that says the American election was fraudulent. This shows how ideological Silicon Valley oligarchs have become. For four years leading members of the media and cultural elites in the US and the UK have said the American presidential election and the EU referendum of 2016 were frauds. That they were meddled with, illegitimate, should be overthrown. You’ll find tens of thousands of videos on YouTube featuring people saying the vote for Brexit was a fit-up by Ruskies or an ‘advisory’ vote fraudulently turned into an instructional one. They won’t be taken down. Because our tech overlords are engaged in acts of openly political censorship.

And then there’s Parler, the libertarian alternative to Twitter. Google this week removed the Parler app from its store on the basis that it doesn’t control its users’ inflammatory speech strictly enough. Apple is threatening to do likewise. All those who said ‘Just make your own social-media platform’ clearly underestimated the tyrannical determination of the woke elites to erase ‘offensive speech’ from every quarter of the internet. This is a full-on purge of any voice that significantly runs counter to the worldview of the anti-populist elites.

That the left is cheering this on is cretinism of the most remarkable kind. They are green-lighting the most thorough assault on freedom of speech that the capitalist elites have ever carried out. They are sanctioning the control of speech by billionaires. They are celebrating as corporate oligarchies interfere directly in the democratic process. They are making a fetish of private property rights, insisting that the corporate rights of virtual monopolies like Twitter and Facebook, in this case their right to throw people off their platforms, override the social, democratic good of free public debate.

I know this is unlikely anytime soon — given the entirely bullshit and pseudo ‘leftish’ posturing of the Silicon Valley elites — but imagine if at some point in the future the tech overlords decide that Bernie Sanders or some rabble-rousing organiser of protests outside Google’s HQ might ‘mobilise audiences’ to do something bad and decide to ban them? What will the left say? Nothing, presumably. Or nothing that should be taken seriously, given they will have helped to create this web of tyranny. They have forgotten the cry of the true radical Thomas Paine: ‘He that would make his own liberty secure must guard even his enemy from oppression; for if he violates this duty he establishes a precedent that will reach to himself.’

There is danger in the current moment. It comes not from horn-helmeted idiots and racist scumbags who paraded through the Capitol Building for an hour, but from those who wish to turn that despicable incident into the founding myth of a new era of woke authoritarianism. The business and political elites, determined to crush the populist experiment of recent years, will busily launch wars on ‘domestic terrorism’, clamp down on inflammatory speech, purge from the internet and from workplaces anyone with ‘incorrect’ thoughts, and blacklist those who believe populism is preferable to technocracy. They’re already doing it. The Biden administration isn’t even in power yet and this is already happening. Imagine how emboldened the new oligarchies and their woke mobs will become once Biden and Co are ruling. Brace yourselves; the purge is only beginning.