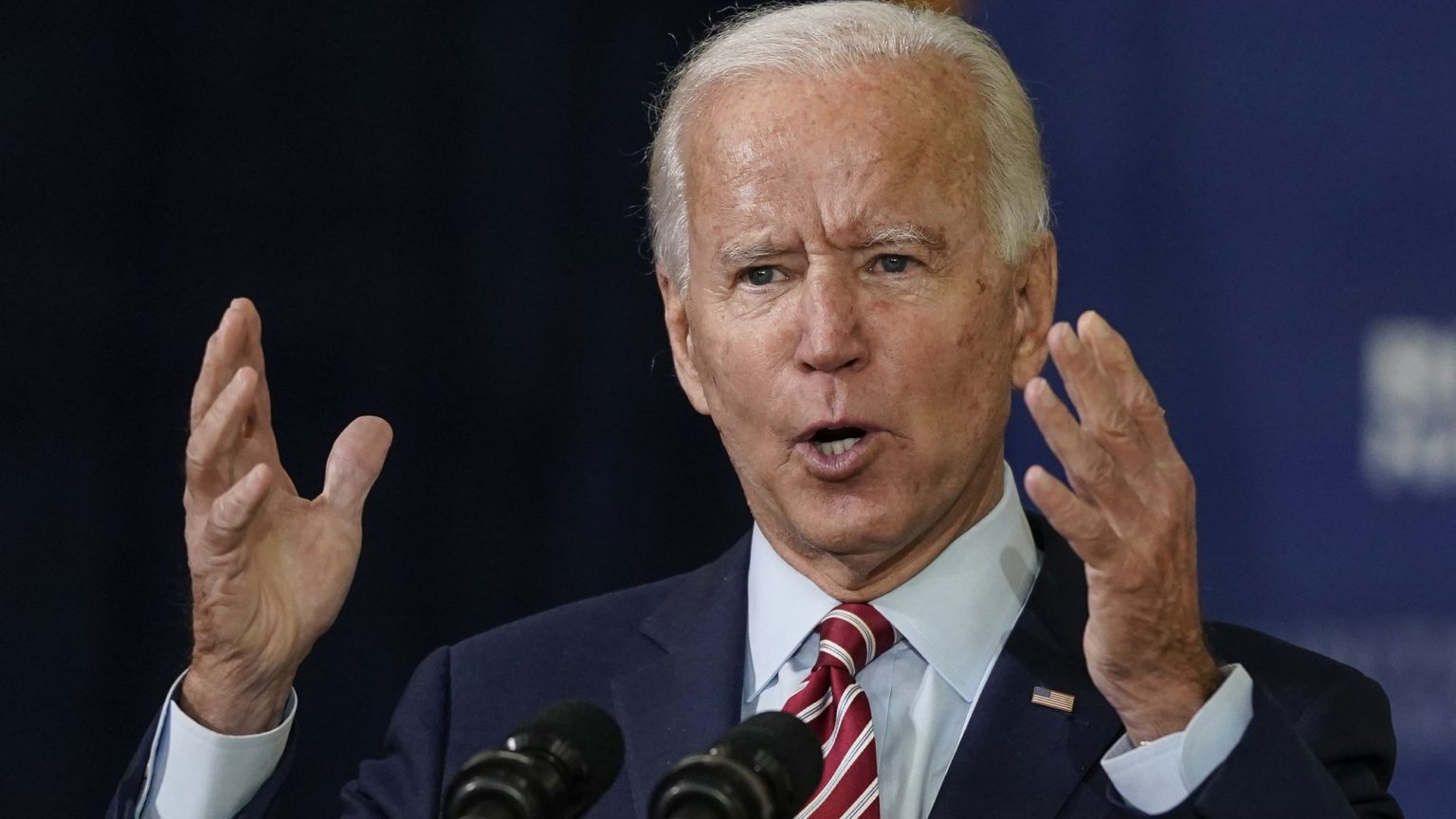 Science is now just another wing of politics

When science so readily attaches itself to politics, policies and candidates, it loses all claim to objectivity.

Earlier this month, Scientific American broke with what it claims is its 175-year history of political neutrality to endorse US presidential candidate, Joe Biden. According to the magazine’s editorial: ‘The evidence and the science show that Donald Trump has badly damaged the US and its people.’ Strong stuff. But what field of science produced this judgement? Physics, perhaps? Chemistry? Biology? None of them, of course. The truth is that institutional science has willingly politicised itself and prostituted itself to power to such an extent that it no longer understands the difference between politics and science.

SciAm’s editorial, though, is not as much an endorsement of Biden as it is a shrill moral litany of Trump’s crimes: his handling of the pandemic and of healthcare, and his battles with national and global bureaucracies. Biden, by contrast, argued the editorial, ‘is offering fact-based plans to protect our health, our economy and the environment’. Really? Are scientists so easily moved by such crass good-vs-evil political framing?

SciAm was not alone in nailing its political colours to the mast. In the journal Science, editor Herbert Holden Thorp wrote recently that ‘Trump lied about science’. But this view, too, requires rather more interpretation than science. Among Trump’s deadly crimes listed by Thorp was ‘the opening of colleges and schools’. The bastard!

The problem for the editorial teams of both publications is that assent to scientific facts and the drafting and execution of policy are different things. In no area is this confusion more clear than climate change. It was President Barack Obama who, in 2013, said:

‘Heatwaves, droughts, wildfires, floods all are now more frequent and more intense. We can choose to believe that Superstorm Sandy, and the most severe drought in decades, and the worst wildfires some states have ever seen were all just a freak coincidence. Or we can choose to believe in the overwhelming judgment of science – and act before it’s too late.’

Obama’s speech epitomises the problem from the other side. It was not the ‘overwhelming judgement of science’ that extreme weather events on their own or together were more frequent and intense. At best, this remains a matter of controversy. Moreover, extreme events would have to become very many times more frequent and intense to register as greater problems than extreme weather has caused America in the past – let alone become America’s most urgent problems. Obama, who Biden served as vice president, departed from the facts here. But few scientists rushed to condemn him for this.

Put simply, Obama’s speech flattered institutional science and the global political institutions which President Trump has sought to withdraw the US from – namely, the World Health Organisation (WHO) and the 2015 Paris Agreement. But neither assent to nor dissent from facts and science have anything to do with the president’s political choices.

After all, it’s not as if the WHO has covered itself in scientific glory during this pandemic. Why wouldn’t a president ask questions about his country’s support for it? And similarly, as I have pointed out many times on spiked, the Paris Agreement is fundamentally anti-democratic. That might lead some to conclude that the basis of such a claim is ‘science denial’, but this would be to repeat the mistake of confusing political and scientific arguments. Climate change can be understood (and dealt with) as a problem without yielding sovereignty to undemocratic global technocracies.

This confusion runs deep in today’s most high-pitched political claims. One reason for this is that science is increasingly expected to carry the moral, economic and political weight for increasingly worthless political campaigns. Scientific authority – institutional science – can easily produce estimates of a political leader’s policy failures in the crude terminology of body counts. But such estimates are not like the isolation of a gene that causes a disease, or the identification of a new particle.

The SciAm editorial, for example, claims that ‘In his ongoing denial of reality, Trump has hobbled US preparations for climate change’, and that the ‘changing climate is already causing a rise in heat-related deaths’. But ‘heat-related deaths’ turns out not to be a phenomenon that is as easily detected by science as it is explained by economics. Wealthier people do not drop dead in the heat. Global agreements to cut carbon emissions will arguably make many Americans significantly poorer – destroying industries and hiking up the cost of energy. Poverty increases people’s exposure to extreme weather (climate changing or not). Meanwhile, the curbs these international agreements place on democracy hobble the public’s ability to improve their conditions. Besides, it is a cascade of unsound assumptions – not science – which link extreme-weather events to their putative social consequences. An entirely ideological worldview is required to believe the promise that a global climate institution can make things better for anyone at all, least of all for the poor.

The idea that policies can be ‘fact-based’ or ‘science-based’ is itself an ideological claim, no matter how hard we wish for it to be otherwise. Scientists making such claims try to pass themselves off as honest brokers. But they fail to ask scientific questions that might cause them to see ‘heat-related deaths’ as an economic problem, rather than a meteorological problem. The idea that a global bureaucracy established to enforce a ban on combustion will do more for poor people than making them wealthier is a demonstration of the cynical contempt that today’s champions of ‘science’ hold for ordinary people. They think that poverty is a function of weather. Trump might appeal to voters who know and can see for themselves that it is not.

The notion of the Green New Deal was established on the US left to overcome the obvious green indifference to people’s living standards. ‘Biden’, says the SciAm editorial, ‘wants to spend $2 trillion on an emissions-free power sector by 2035’, and this agenda ‘will produce two million jobs for US workers’. It sounds fantastic. But it is a fantasy. Simple arithmetic reveals that each job will cost a million dollars to ‘create’, whereas the green infrastructure will yield no net benefit to Americans, who will have to pay the extra in increased costs of living.

The thing that has typically restrained such absurd political advocacy in the past has been the idea that science could see past the petty world of politics and ideology. Scientific authority comes from the scientific method, which aims to weed out the influence of ideology and other interests. But there is science as a process, and science as an institution. As democratic processes have been emptied of competing political visions, scientific authority has been increasingly sought in lieu of political vision to give a seemingly objective purpose to politics. But the idea that institutional science, by virtue of the scientific method, escapes political ideology is equivalent to the idea that clergymen can commit no evil, by virtue of their membership of the church.

This political expectation of science both precedes the science and precludes scientific and democratic debate. In 2014, Obama’s then science adviser, John Holdren, attacked Professor Roger Pielke Jr, whose work, claimed Holdren, lay outside the ‘scientific mainstream’. Pielke, despite being consistently and categorically ‘pro-climate’, has upset ambitious climate policymakers for pointing out that alarmism, rather than science, underpins the urgent case for such policies. ‘When a political appointee uses his position not just to disagree on science or policy but to seek to delegitimise a colleague, he has gone too far’, wrote Pielke in reply to Holdren’s poorly conceived smear campaign.

The Democrats’ war on scientific dissenters intensified the following year, when Representative Raúl Grijalva, now chair but then a member of the House Committee on Environment and Natural Resources, launched an investigation into seven academics. Grijalva demanded university authorities provide disclosure of the researchers’ (including Pielke’s) funding sources and all private correspondence relating to testimony they had given to congressional meetings. The investigation was roundly condemned as an attack on academic freedom and yielded nothing except harassment and smears.

In the mid-2000s, author Chris Mooney made a name for himself documenting what he called a ‘Republican war on science’. This framing led ultimately to Mooney believing, on no more a scientific footing, that the brains of Republicans and Democrats had different structures – meaning that the former had less aptitude for science than the latter. This pathological view of politics and science is clearly more than science can bear. Yet complaints about this burden put on it by political advocates from science are few and far between.

Similarly, calls to ‘unite behind the science’ come from campaigners across the world, all of a similar political bent. Yet asking what ‘the science’ actually is or says typically yields accusations of ‘science denial’, rather than explanation. ‘Unite behind the science’, but don’t question it. Because only Republicans, climate-change deniers, creationists and Brexiteers might have the sort of dysfunctional mental hardware that dares to question science, right?

Science has nothing to do with it. There is nothing that any Democratic-supporting scientist, journal editor or campaigner can say about their opposite numbers’ candidates that is not true of their own. It turns out that politicians lie, and take liberties with facts, even when they hide behind science. And now scientific journal editors not only seem to be confused about where science ends and politics begins, but they also mistake their own political outlooks for science itself. The only logic of it is that to challenge the party that had declared itself the champion of (institutional) science would be to declare hostility to science.

That academia has become dominated by a political tendency is hardly news. The shameless advocacy for political candidates by seemingly reputable journals is a new development, but it merely formalises entrenched positions. Behind it is not, as they like to think, arguments from scientific objectivity, but arguments that are as questionable and take as many liberties with facts as any presidential candidate’s. They depend on a whitewashed role of institutional science during the Covid-19 crisis, and on extremely alarmist interpretations of climate change and on other things that may well only count as ‘science’ because increasingly politicised institutional science has excluded challengers from its ranks – just as Grijalva’s witch hunt, Holdren’s censure, and Mooney’s slander intended.

When institutional science attaches itself to politics, to support candidates, it loses any claim to objectivity, and any ability to speak truth to power. Science and SciAm will be unable to say anything about either president’s claims without bringing their own conflicted positions to the spotlight. If Biden wins, scientific institutions like important journals will become mere cronies. And if Trump wins, they will look like bitter losers. Scientists risk creating a situation in which society will no longer trust in the objectivity of institutional science. They have squandered scientific authority on a political gamble. Perhaps if scientists had been more questioning of both Obama and the Democrats they might have spared themselves the ordeal of Trump.