Climate advocacy has become a refuge for political no-hopers. 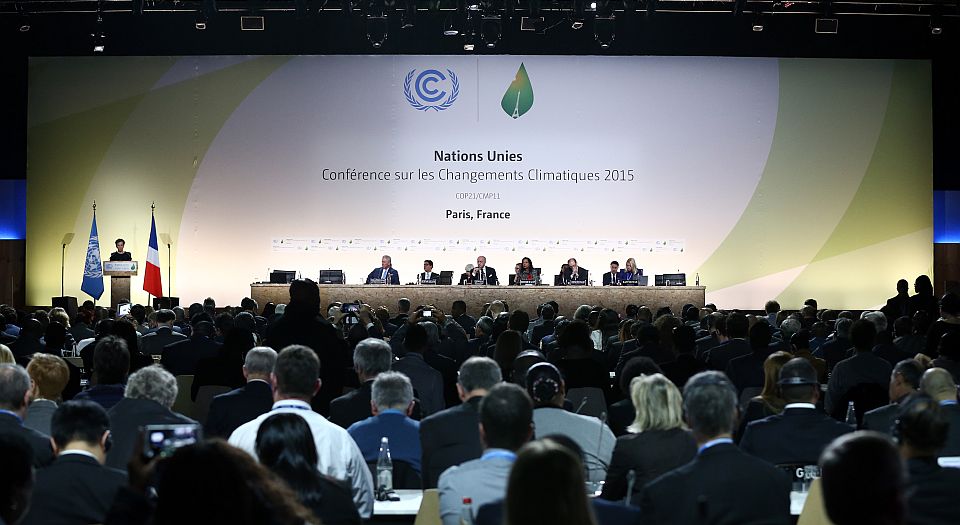 Last week in Paris, a long-sought-after agreement to limit climate change was finally arrived at. A successor to the previous agreement – the Kyoto Protocol – had been hard to find. Bitter and farcical meetings became an annual ritual – a jet-set circus that epitomised green cant and science abuse. In Paris, all that seemed to be over. The deal struck was hailed by the conference’s own attendees as an ‘historic breakthrough’, and a ‘giant leap for mankind’. But we should not be fooled by the grand words policymakers used to capture the ‘gravity’ of this moment – the Paris deal was a triumph of mediocrity.

This was a strange kind of global ‘agreement’. This is because environmental policies usually require some level of sacrifice. Global agreements typically aim to eliminate the ‘free-rider’ problem by sharing the pain equitably: we will if you will. Not so in Paris, where it was ‘agreed’ that each country could commit to emissions reduction as it pleased, could opt out from its own commitment, and that there would be no enforcement. In short, it was not global, and it was not an agreement. The ink on this non-agreement was still wet when Indian officials said that it would not affect their plans to double the country’s dependence on coal over the next decade, much to the Guardian’s displeasure.

There could be no more fitting a coda to the Paris talks than the news that former Labour leader Ed Miliband, fresh from defeat at the 2015 UK General Election, was to become a ‘climate evangelist’. As world leaders, diplomats, civil servants and NGO activists were still patting themselves on the back, Miliband announced that he would lead a cross-party group of MPs intent on making the UK carbon-neutral. Failed, distant, charmless, mediocre politicians reinventing themselves as ‘climate champions? There is a connection.

The rise of Miliband reflects climate politics in microcosm. With no experience of frontline democratic contest – such as years of pressing flesh, winning debates and plodding streets – the backroom adviser to Gordon Brown was parachuted into the safe seat of Doncaster North, a place far away from his home in Primrose Hill. The gift of a safe seat was followed under Brown’s premiership by a cabinet position in the new role of secretary of state for energy and climate change. With the benefit of a cross-party consensus on climate change and activists seconded from environmental NGOs, Miliband oversaw the final stages of the Climate Change Bill. Having secured the world’s first piece of climate-change legislation, Miliband went to the 2009 climate negotiations in Copenhagen, hoping to establish the UK as a world leader of climate policy. Unfortunately, the Copenhagen meeting – much like Miliband’s attempt to lead the Labour Party to government – was consigned to history as an epic failure.

This is the anatomy of every individual and institutional champion of climate change. Whether they come in the form of a man, a woman or an organisation, climate champions are characterised by their disconnection from ordinary people and everyday life. Yet they nonetheless occupy positions of power and influence. Unsure of the mandate from below, the concentration of gasses in the atmosphere above gives the climate champion authority and secures their privilege. The political consensus on climate change, then, is not an agreement on climate change, but a compact to close ranks against the putative climate champions’ own worthlessness: a mediocracy is formed. At a press conference in Paris, UN secretary general Ban Ki-moon urged world leaders to ‘look beyond their national interest’ – that is, to ignore the wishes of their domestic populations. Climate change is presented as above such petty things as democracy.

It is incredible how climate orthodoxy has transformed political life. At the Paris talks, any suggestion that cutting emissions might not enjoy a popular, democratic mandate was ignored. Journalists covering the event seemed to forget that it is their job to challenge authority and were found literally jumping for joy when the deal was announced. Radical protesters argued not for the state to take its hand off the yoke, but for more of its power to be used in more draconian ways. Science was invoked not for its potential to transform material conditions, but to service the political cause of limiting aspirations. Billionaires who have lost faith in capitalism spoke about their role in this post-democratic world: bringing half-baked technologies to the market, with full government subsidy, of course. Even popstars managed to get in on the act, inventing something called a ‘cultural mandate’ to act on climate change – something that, apparently, only people with charts hits are qualified to do.

The miserabilists’ sudden euphoria is hard to explain. Even if the deal in Paris was a meaningful agreement, it would not have been like some moment of independence or revolution, after which people would have more control over their own lives; it would mean merely the creation of a new institution or layer of governance. The meeting in Paris, then, was little more than a massive orgy of petty bureaucracy, its delegations trading adenoidal whinges, each of which directed not at making the world a better place, but at creating a political institution for the micromanagement of production and consumption, for its own sake.

Even so, not all greens were happy. The deal was a ‘fraud’, said climate scientist James Hansen. George Monbiot said it was merely ‘squalid’. Friends of the Earth said it ‘falls far short of the soaring rhetoric from world leaders’. Already, the climate movement is ripping itself apart, with some of its most notable figures calling out those with insufficient commitment to the cause as ‘deniers’.

What the Paris talks has given the climate champion, however, is a superficial ‘agreement’, which, by virtue of its vagueness, will allow anything to be projected on to it. Paris is, therefore, a triumph of meaninglessness over the rest of the world. In many respects, a Humpty Dumpty fudge gives more licence to climate champions than a precisely worded document ever could. Just as the fact of the scientific consensus on climate change allows environmentalists to ad-lib about its substance, so too the pretence that an agreement on climate change exists will free the mediocracy assembled under its protection from being held to account. That is the main function of this so-called agreement.