There’s nothing ‘inspiring’ about Kamala Harris

She is only really loved among Wall Street, Silicon Valley and identitarian liberals. 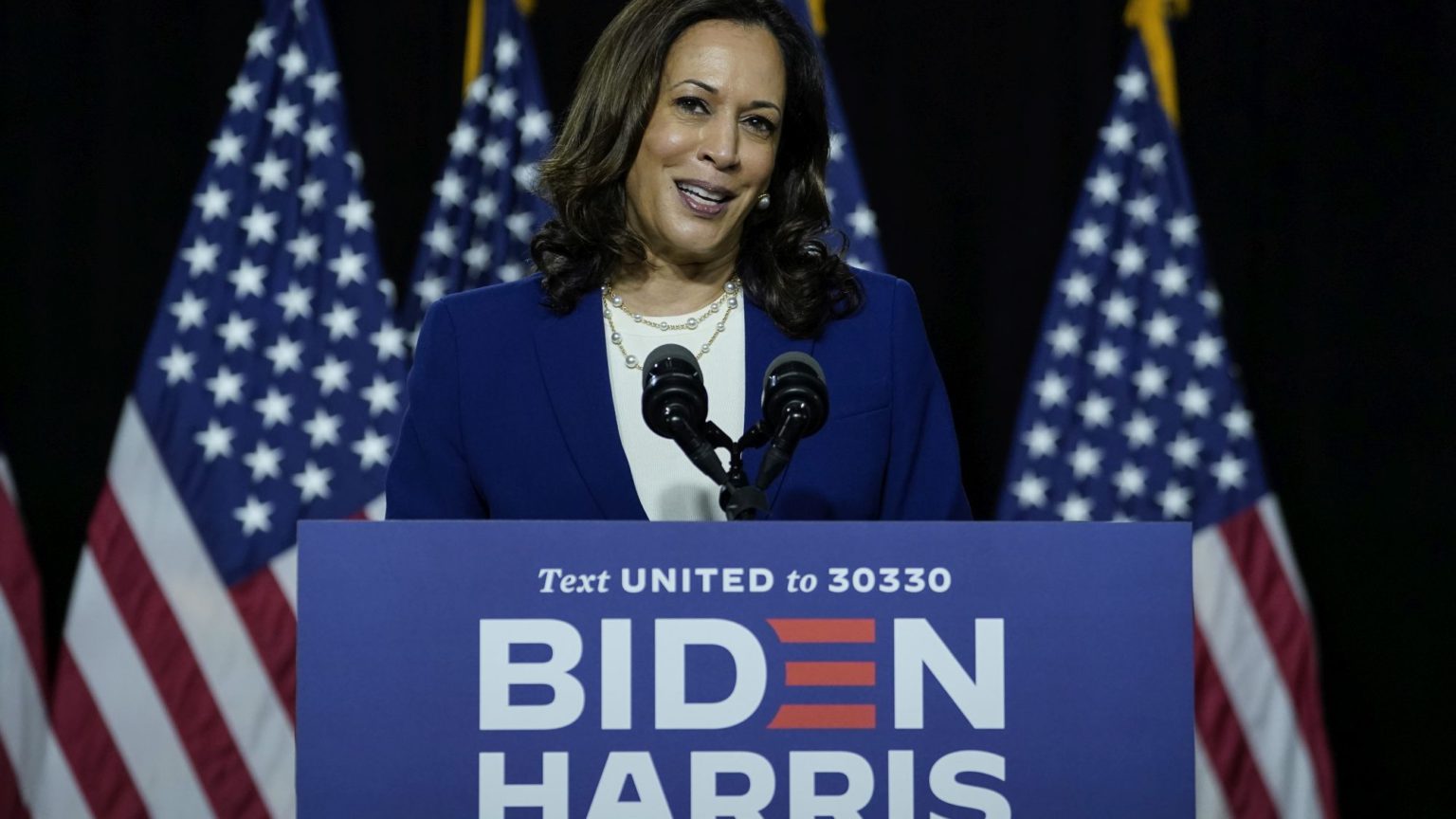 Joe Biden’s selection of Kamala Harris as his running mate has been hailed as ‘historic’, based on the fact that Harris is the first black woman and first person of Asian descent to be nominated as vice-president for a major party. The New York Times devoted nearly all of its front page to the selection of Harris, with a huge photo of the candidate and three articles praising her as a ‘political warrior’ and ‘energising’. Hero-worship has replaced the news at the Times.

As it happens, these celebrations of Harris’s historic firsts diminish her accomplishments to get to this point. It seems she was chosen only because she ticked the Democrats’ identity boxes for the right gender and right ethnicity. But after having had Barack Obama in the White House for eight years, are we supposed to get excited by a candidate’s skin colour? And after Hillary Clinton’s close loss in 2016, are we meant to be whooping because a nominee is a woman?

The demand for identity-politics orthodoxy is strong with the Democratic Party, and Biden had to play the game. After Clinton’s defeat in 2016, a number of observers, including Mark Lilla in his book The Once and Future Liberal, blamed divisive identity politics for fragmenting the party’s message and driving away support from white workers. But the party ignored those voices, and if anything Biden and his fellow Democrats are doubling down on the idea that God-given attributes determine everything. Back in March, Biden had promised to select a woman, and, after the George Floyd protests, his campaign was pressed to pick a black woman. Once Biden accepted those restrictions, Harris was the clear front-runner, as there really aren’t many prominent Democrats who fit that bill.

While the Democratic Party elites find all this celebration of identity to be super inspiring, the party’s voters are less moved by it. All the hoopla over Biden’s choice of Harris is very similar to the media’s cheering for her during her campaign for the party’s presidential nomination. As it turned out, that campaign was a big washout, and female and black Democratic voters were decidedly unenthusiastic about her. These voters all over the country – including in South Carolina and Harris’s home area of Oakland, California – did not vote with their skin colour or sex.

During her campaign, Harris weaponised identity to attack Biden, but without electoral success. At the first debate she effectively called Biden a racist for his opposition to government-forced school bussing in the 1970s – which she later admitted was her own position as well. Last year she also deployed the politics of #MeToo against Biden, saying she ‘believed’ the women who accused him of sexual misconduct. ‘I believe them and I respect them being able to tell their story and having the courage to do it’, she said at the time. Yet, despite these accusations, Biden asked Harris to be his VP, and Harris accepted – which shows you just how seriously Democratic elites take such allegations.

Biden’s choice of Harris is seen as more significant than a typical vice-president selection. If elected, Biden would be 78 at the inauguration and the oldest man to ever assume the presidency. He has said throughout his campaign that he views himself as a ‘transitional’ figure, and he probably wouldn’t seek re-election in 2024. On top of this, Biden’s mental sharpness is clearly waning. Given his health issues, there’s a prospect that Biden would become Chernenko-like leader, with the real decisions being made by others behind the scenes – like the vice president.

Now 55 years old, Harris is a generation younger than Biden, and, win or lose in November, she is now likely to be one of the key leaders of the party going forward. What does that tell us about the Democrats’ future? Well, if Harris’s presidential run is any indication, centrist leaders like her don’t really know what they stand for.

In that campaign, she sought to pander to all of the Democratic Party’s factions, and ended up unable to connect with any. She established a trademark for vacillation: first trying to win over the progressives by backing Medicare for All and the Green New Deal, and then backtracking after some embarrassing interviews and discovering that Democratic voters weren’t that keen on those ideas. She claimed her history as a tough-on-crime prosecutor was an advantage, but, following a Twitter campaign (#KamalaIsACop), she later apologised for anti-truancy policies and unconvincingly tried to present herself as a criminal-justice reformer. In these days of Black Lives Matter, you can imagine that Harris will be equally challenged in this election to come up with a coherent line on law enforcement that will satisfy both the progressive ‘defund the police’ types and the nervous suburbanites watching the city riots on TV.

Harris is also likely to prove that ‘woke capitalist’ is not an oxymoron. She embraces woke social justice and cancel culture in all of its illiberalism. For example, she took on the witchfinder general role in the Brett Kavanaugh confirmation hearings in the Senate, introducing false claims of gang rape into the congressional record. At the same time, she is a favourite of the Democrats’ biggest money supporters in finance and technology. ‘Wall Street leaders on Tuesday cheered Joe Biden’s selection of Senator Kamala Harris as his running mate’, said CNBC, noting her prolific fund-raising among bankers. ‘Silicon Valley is happy about seeing a familiar face’, writes the New York Times. ‘Tech executives appear excited by her place on the ticket and reassured by her circumspect stance on things like breaking up the tech companies.’

As critics have noted, the Democrats over time have become more representative of progressives on the coasts and less attuned to the needs of voters in the middle of the country. The selection of Harris as Biden’s running mate, with her support from Wall Street (East Coast) and Silicon Valley (West Coast), will drive the party further in that direction. Biden has said he’s aiming to win back the white working-class voters in key states like Pennsylvania and Michigan who deserted the Democrats to vote for Trump in 2016. But Harris won’t help him with that constituency.

The spotlight will be on Harris over the days and weeks to come. But we shouldn’t get too carried away with all that. Ultimately, the race is going to come down to Biden vs Trump. Right now, Biden is ahead in the polls, and the buzz around Harris might give him a further boost. Yet, it’s hard to not conclude that much of his support has not been fully tested. Clearly, Biden has benefitted from the chaos and ineptitude of the Trump administration. But it has to be said that Biden’s campaign to date has been strange, as he rarely leaves his basement – the reason given is the pandemic, but it increasingly looks like he’s avoiding attention. After a number of gaffes in recent months, the word is that his handlers are afraid of what might happen in the 90-minute debates later this autumn. Trump will certainly try to capitalise on an image of Biden as frail and mentally unsound.

Ironically, Harris’s relative youth and dynamism might highlight Biden’s lack of those attributes. And if she is more prominent in the public eye than Biden, voters might wonder who is really calling the shots. People will know that a vote for Biden for president could very well mean a vote for Harris as president in the future – and sooner than you might think. We will see if the two of them, offering themselves as a package deal, will be able to present a positive case. More likely, they will seek to scrape by on a simple message: that they can restore the country to what it was before Trump.