We are sleepwalking into segregation

Racial identity politics is fuelling a cruel, racist and segregationist outlook. It must be resisted. 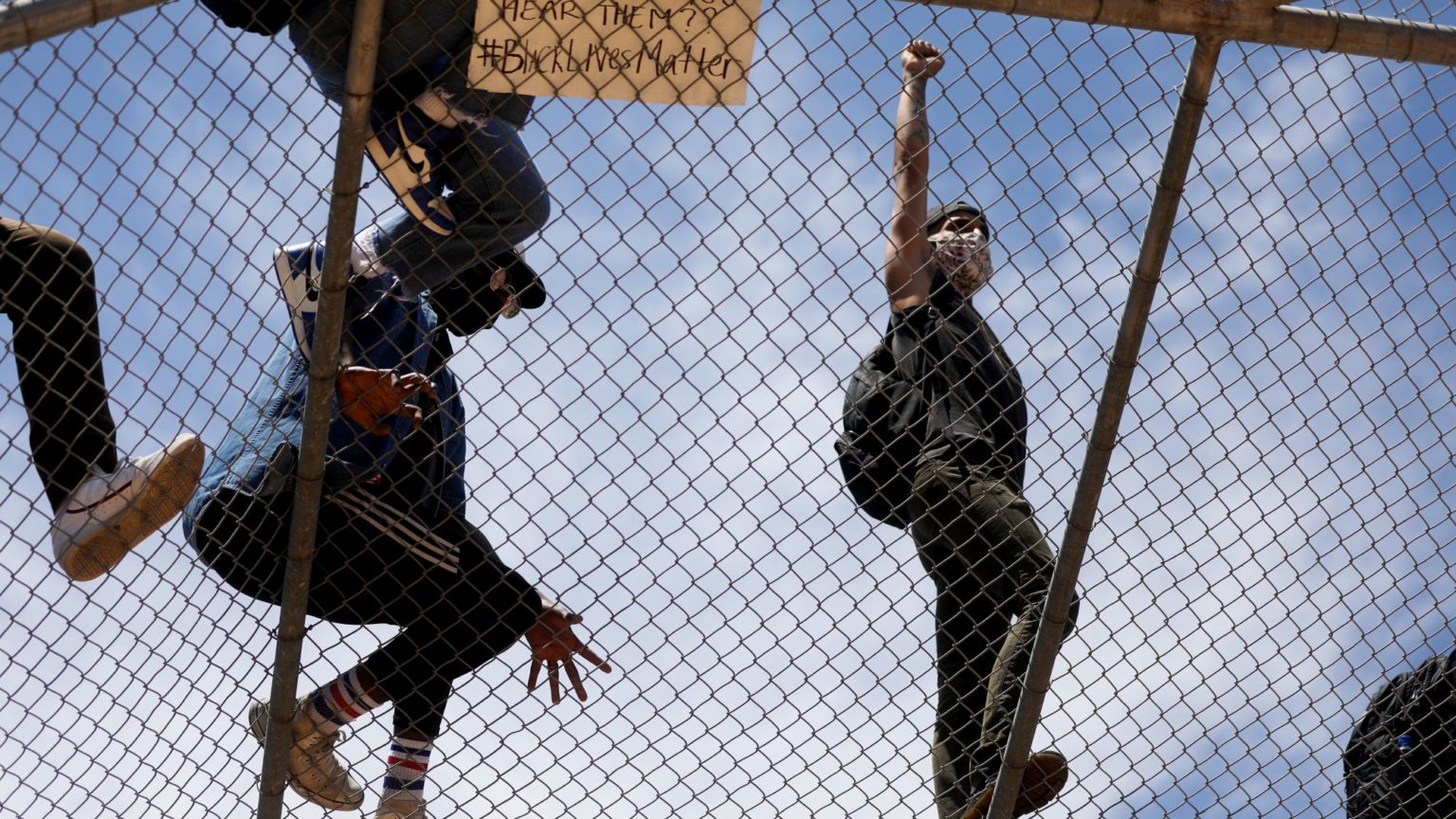 Wokeness has turned the world upside down. Today it is those who think of themselves as anti-racist who are adopting segregationist views.

The woke policing of racial boundaries has been going on for some time and in plain sight, though it has faced little challenge. Initially, its most obvious expression in the mainstream was the policing of art and culture. Celebrities and artists were shamed and mocked for the sin of ‘cultural appropriation’. The use of supposedly ‘black’ hairstyles, fashion, food and music by white people (and even certain non-whites) was denounced as a form of cultural theft. Those who strayed beyond their racial boundary were told: ‘Stay in your lane.’

Now more nebulous ideas about ‘whiteness’ and ‘white culture’ have taken root in mainstream discussion and their boundaries are becoming sharper. Back in 2018, the Guardian tried and failed to define ‘white culture’ with any precision. ‘If whiteness takes no shape, then the concrete structures that shaped it (and often benefit from it) remain invisible too’, wrote data journalist Mona Chalabi. Sifting through the data, Chalabi discovered that white people like the arts, vegetables, alcohol and dairy products. Nonetheless, she was convinced this nebulous white culture was a force for ill, cannibalising all the other race-based cultures for its own ends.

But in the wake of the recent Black Lives Matter protests, the National Museum of African American History and Culture (NMAAHC) has put forward a far more definitive list of the ‘aspects and assumptions of whiteness and white culture in the United States’. The list, published yesterday, could easily have been drawn up by a white supremacist. While some of the aspects of whiteness it highlights are fairly mundane, such as a lifestyle that prefers the nuclear family and follows Christianity, many of the inclusions are downright racist when you consider their opposites. For instance, if ‘politeness’, ‘hard work’ and ‘objective, rational thinking’ are hallmarks of ‘whiteness’, then what does that say about people who aren’t white? Are we supposed to conclude that they are rude, lazy and irrational?

More significant is the underlying assumption – which is now widely held by our woke elites – that whites and non-whites should not only be held to different standards but are also expected to hold different, alien values. These unbridgeable divides are not based on old-school racist views of white supremacy, but on a profound pessimism about race relations. As the statue-toppling antics of BLM protesters illustrate, it is now common to view ethnic minorities as forever chained to the past horrors of slavery and colonialism (hence the need to destroy the past symbolically). Despite all evidence to the contrary, and despite all the concrete gains of past anti-racist movements, the woke narrative insists that nothing has really changed for people of colour.

This race fatalism has even led some ‘anti-racists’ to embrace explicitly segregationist ideas. Again, these ideas are not framed in terms of racial superiority, but almost as a kind of safe space from a supposedly irredeemably racist world. In the UK, an academic plans to set up the Free Black University which can act as ‘a space of community and care for black students, connecting them with black therapists, counsellors and community healers to offer a range of support’. Even at established institutions like Oxford University, the notion that black students can only relate to other black people is widespread – whether that is black teachers or counsellors in the present or black authors from the past. For instance, in recent weeks vice-chancellor Louise Richards has committed to bringing in black counsellors from outside the university to address the mental-health needs of black students.

This segregationist attitude is even expressed in physical spaces. Many universities in the United States offer black-only accommodation and recreational facilities. In 2017, Harvard hosted its first black-only graduation ceremony. A 2019 report found that more than 75 US colleges offered segregated commencement events. Of course, this is nothing like the evils of Apartheid or Jim Crow, but it is nonetheless striking that the supposedly progressive logic of identity politics and of the campus safe space also tends towards the physical separation of people according to their race.

This hyper-racialised view of the world has been promoted by every institution under the sun – in education, in the media and even by major corporations. Disturbingly, it is also clearly having an effect on how some people see themselves and on their most intimate relationships. Writing in the New York Times in 2017, a law professor asked, ‘Can my children be friends with white people?’. ‘I will teach my boys to have profound doubts that friendship with white people is possible’, he wrote, in a supposedly progressive newspaper. ‘When they ask, I will teach my sons that their beautiful hue is a fault line.’

Earlier this month, during a Zoom meeting of a New York City Community Education Council, a white councillor was bouncing a black baby on his knee (the baby was his friend’s nephew). This innocent activity provoked howls of outrage. ‘It hurts people when they see a white man bouncing a brown baby on their lap’, a fellow councillor screamed in indignation. ‘That is harmful. That makes people cry. That makes people log out of our meeting.’ She then makes clear where this rage comes from: ‘Read a book! Read Ibram Kendi! Read White Fragility!’ These two books – Robin DiAngelo’s White Fragility and Ibram X Kendi’s How to Be an Anti-Racist – not only topped bestseller lists during the BLM demos but are also taught in schools and used in workplaces to train people how to be ‘anti-racist’. Both promote a hypersensitivity to race and an extreme race fatalism. As Luke Gittos has argued on spiked, DiAngelo’s calls for white people to become more conscious of their race are eerily similar to the arguments put forward by white nationalists like Richard Spencer.

This view of races as distinct and divided is particularly harmful to mixed-race people. In the UK, mixed race is the largest growing ethnic group. Ordinary people are getting on with living in a multiethnic society. Many people are so not bothered by racial difference that they are starting mixed-race families together on an unprecedented scale.

But for the woke types, this simply will not do – at least not without their intervention. In her bestselling Why I’m No Longer Talking to White People About Race, Reni Eddo-Lodge insists that the existence of mixed-race people ‘makes race relations more complicated, not less’ – meaning it makes race consciousness more necessary. ‘White privilege is never more pronounced than in our intimate relationships, close friendships and our families’, she writes. Eddo-Lodge then quotes a mixed-race interviewee who has clearly been influenced by the woke politics of race: ‘Now, when I see an interracial couple, I feel uneasy.’ Parents of mixed-race children, she says, need ‘to be humble, and to learn that they are racist even if they don’t think that they are.’

But the effect of a white parent to a mixed-raced child seeing themselves as racist is profound. Some parents have obligingly accepted that they are indeed racists. ‘White supremacy lives inside me’, wrote one woke parent recently, whose bizarre mea culpa went viral. It is hard to overstate how cruel all of this is. When even the most intimate relationships are poisoned by the need to see race everywhere, the result is that parents feel alienated from their own children – and vice versa.

The new politics of race may present itself as progressive and ‘anti-racist’, but it is anything but. It explicitly seeks to divide people by race. If we don’t take a stand against this, or don’t offer a universalist, colourblind alternative, then we will sleepwalk into further segregation.