How dare they remove the Emancipation Memorial?

Taking down a statue paid for by freed slaves – this is the worst thing the woke hysterics have done. 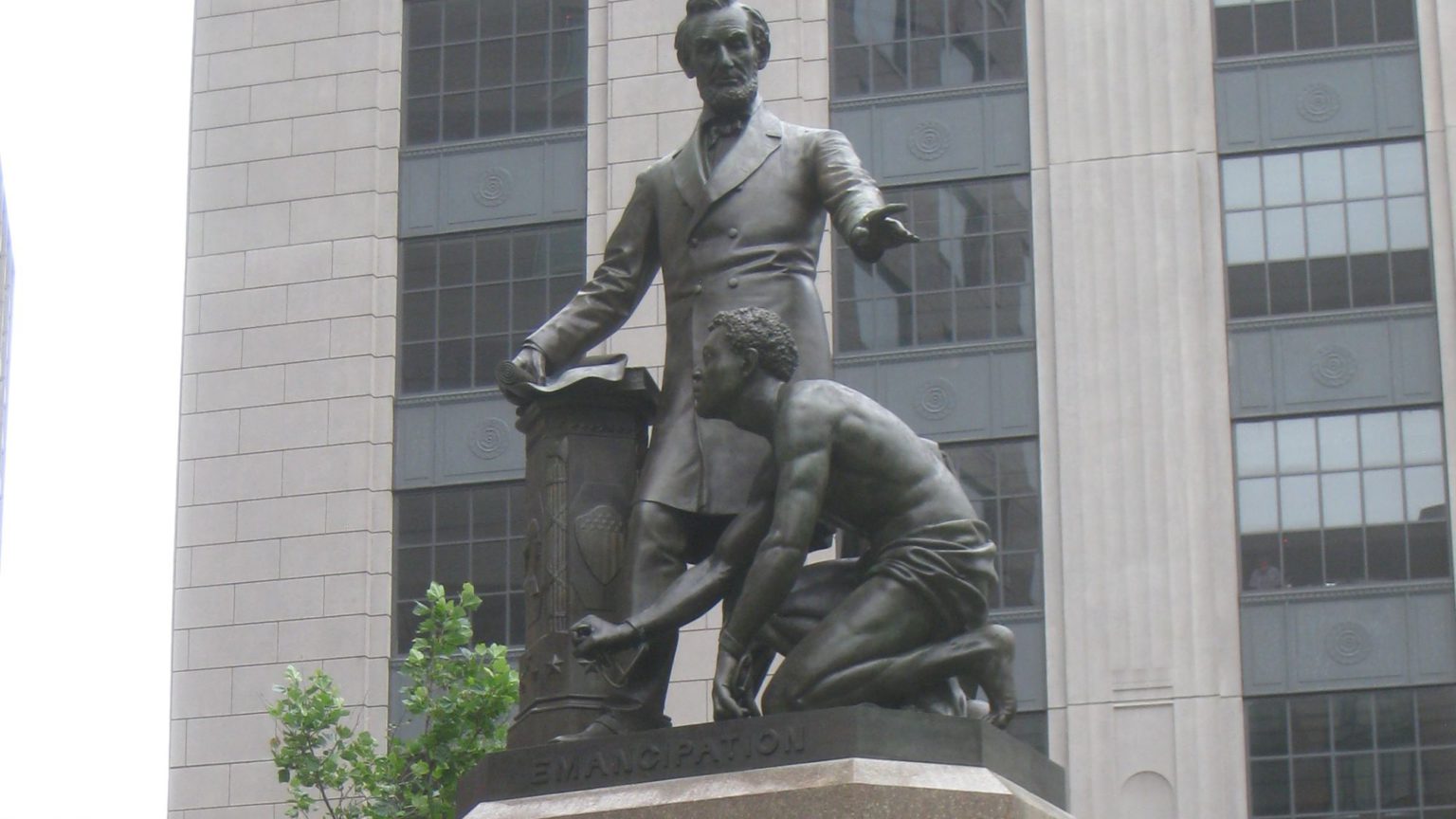 To see how deranged the neo-Maoist war on statues and history has become, consider this. What started as an attack on statues of slavers, including Edward Colston in Bristol in England and various Confederate monuments in the US, has ended with fury against a statue commemorating the end of slavery and which was paid for by freed slaves.

The woke warriors have now reached such a peak of historical illiteracy and emotional narcissism that they think they have the right to reprimand freed slaves for how they spent their money and how they viewed themselves in history. This is the lowest point yet of the Orwellian intolerance that has frothed and raged in activist circles in the four weeks since the killing of George Floyd.

Last night the Boston Arts Commission voted unanimously to take down the Emancipation Memorial from Park Square in downtown Boston. This pusillanimous act of officially endorsed vandalism of a monument to freed slaves that has stood in Boston since 1879 is a response to the agitation of easily offended protesters who object to the monument’s depiction of Abraham Lincoln standing upright over a bent, newly freed slave breaking out of his chains. They say this erases the history of black people’s liberation of themselves, via slave revolts and the involvement of black soldiers on the Union side in the Civil War. It is ‘white saviourism’.

The Boston statue is a copy of the original Emancipation Memorial that stands in Lincoln Park in Washington, DC. That statue has been the site of much woke wrath in recent weeks, with some people literally having hysterics about it, to such an extent that it is now surrounded by a fence to protect it from attack.

Think about this: a statue commemorating the end of slavery is having to be protected from assault, not by racists and white nationalists, who might detest the idea of a monument to black liberation, but by supposed progressives and self-styled anti-racists. This is testament to the industrial levels of self-regard and cultivated brittleness that now exist in the supposedly left activist world.

The warriors against the Emancipation Memorial, like the destroyers of other monuments in recent weeks, tend to come from university-educated circles. Many are upper-middle-class white leftists or well-bred Antifa supporters or TikTok revolutionaries: bourgeois suburban youths bored with lockdown and engaging in a few months of plastic radicalism before they head off to their Ivy League school.

These people have imbibed critical race theory. They take a literalist, humourless view on everything. They judge nothing in its context, whether historical context or artistic context. Instead, everything must merely, and savagely, be judged by whether it lives up to the severe pseudo-ethical standards of the new woke morality police; by whether it conforms to their view of the correct message, the correct tone and the correct levels of comfort-giving that every monument and work of art must apparently convey. If any monument fails to do this, if it fails to massage the heightened emotions of narcissistic activists who literally believe they should never have to see or hear anything they don’t like, then it must come down.

Just listen to the words of Ekua Holmes, a member of the Boston Arts Commission that voted to take down Boston’s copy of the Emancipation Memorial. ‘[I]t hurts to look at this piece’, she said. One report on the commission’s discussion said the commission heard from some members of the public who said the monument ‘made them uncomfortable’. Uncomfortable? What a crime! Tear it down. Hide it.

We now live in a world where some people are so thoroughly drowning in self-absorption that they think things that make them uncomfortable – statues, controversial speakers, books – should be torn down, silenced or burnt.

And so Boston will reportedly spend $15,000 on removing the Emancipation Memorial. The state will spend money to take down a statue that is a copy of a monument famously funded by freed slaves because they wanted to pay tribute to Abraham Lincoln and to make their first mark in the public square of the American republic. How dare Boston’s officials do this? Who do they think they are? They are silencing the historic voices of freed slaves; they are trampling all over those freedmen and women’s aspirations to public representation; they are now calling actual liberated slaves ‘problematic’. It is a scandal.

What we are witnessing is the elevation of the moral psychodramas of entitled 21st-century activists over the democratic aspirations of freed slaves. We are witnessing the creation of such a warped hierarchy of feeling and ‘social justice’ that it can place the sensitivities of overeducated, often comfortably off modern-day activists above the desires of freed slaves who gave some of their meagre wages to the making and erection of the Emancipation Memorial because they wanted a presence in the history of the republic.

This is important to note because it highlights the unforgiving dynamic of the current moment; the extent to which all of history, and reality itself, must now be subordinated to the whims of the contemporary cult of hyper-fragility. If even slave-paid monuments to emancipation and democracy cannot escape the hammers of historically illiterate middle-class nihilists, then nothing can. Nothing in history or memory is safe from the Woke Taliban.

Taking down the Emancipation Memorial in DC or its copy in Boston would be a crime against the democratic longing of newly freed slaves in the late 1800s. For the DC memorial was erected precisely to stamp the presence of freedmen and women on to the life of the American republic. The memorial was meant to endure as a statement of freed people’s aspirations to democratic equality.

Listen to Fredrick Douglass, the slave turned abolitionist, who spoke at the dedication of the memorial in DC in 1876. People will remember ‘the story of our presence here’, he said. He told the crowd that they had gathered ‘here in the District of Columbia, here in the city of Washington, the most luminous point of American territory’, to see themselves and their ‘friend’ – Lincoln – become an immovable part of American history via this monument.

Douglass said: ‘We, the coloured people, newly emancipated and rejoicing in our blood-bought freedom, near the close of the first century in the life of this Republic, have now and here unveiled, set apart, and dedicated a monument of enduring granite and bronze, in every line, feature and figure of which the men of this generation may read, and those of after-coming generations may read, something of the exalted character and great works of Abraham Lincoln, the first martyr President of the United States.’

Hear those words: enduring; a monument of granite and bronze that ‘after-coming generations’ would reflect upon and in doing so learn something of Lincoln and of ‘the coloured people’ who spilled their blood for their freedom. This was a statement of history-making, an intrusion by freed people into the public realm and into the consciousness of America; it was a message to future generations as much as it was to people in the 1870s. And now one of those future generations has responded by saying: ‘Your monument offends us and we are going to remove it.’

The arrogance is astounding; the disregard for the activism and aspirations of freed slaves even more so.

Yes, Douglass criticised Lincoln in his speech at the memorial. Yes, he wasn’t completely in love with the monument itself. But he celebrated the memorial because he had a far keener and more democratic understanding of history than today’s left nihilists do. He praised Lincoln for his achievements rather than obsessing over his possible motives (‘because of his fidelity to union and liberty, he is double dear to us’), and he looked to the future rather than obsessing over the crimes of the past.

‘I refer to the past not in malice, for this is no day for malice’, he said, ‘but simply to place more distinctly in front the gratifying and glorious change which has come both to our fellow white-citizens and ourselves, and to congratulate all on the contrast between now and then’. The contrast between now and then: this is the aspirant, democratic view of making history and changing the world. It is the polar opposite of the narcissistic, destructive cult of presentism that now passes for radical activism.

What a disgrace it is that the views and dreams of those 19th-century democrats are being crushed by a hysterical bourgeoisie that views history as nothing more than a litany of crimes and which wants to deprive future generations of the right to see any monument that the woke elites deem to be ‘problematic’. The Emancipation Memorial and its copy must stay. Who will defend them against the state of Boston and the mobs in Washington?