Labour has finally admitted it lost the working class

spiked and others have been pointing this out for decades. But Labour activists would not listen. 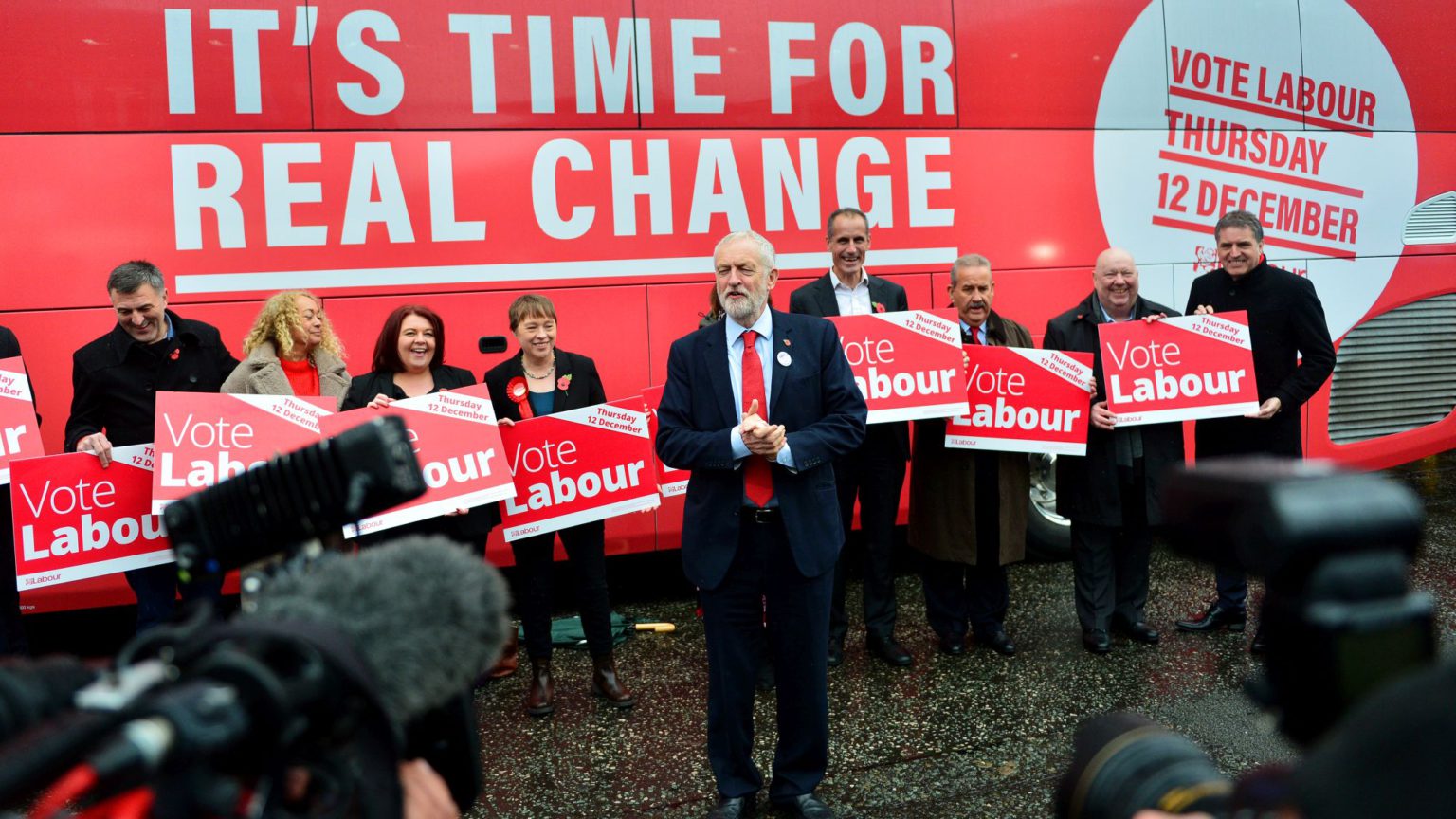 The Labour Party’s post-mortem on its failure in the 2019 General Election should be sobering reading for party activists.

To underscore the difficulty that Labour faces, the authors note that at the next election it will need ‘a historic swing of over 10 per cent… to gain a majority of one seat’. Worse still, ‘no major party has ever increased their number of MPs by over 60 per cent, which is what Labour would need to do to win in 2024’. In other words, this is a party that is likely to be in opposition for a long time to come.

The most galling news for Labour is that having done the breakdown, the party has finally discovered that it has lost its working-class base:

‘The institutional and cultural bonds that linked many voters to Labour have become weaker and weaker over time. From the loss of local Labour clubs to declining trade-union membership, Labour has lost many of the institutional roots it had within communities, resulting in disconnection.‘

Labour’s base in the working class has been important to the party since it was formed in 1905 (the clue is in the name). The whole point of the Labour Party was that it would give the working class a voice in government. But programmatically, Labour was already repackaging itself as a party for all classes in the 1950s – reaching out to middle-class voters by toning down its nationalisation policies in favour of a ‘mixed economy’. Despite the impact of those ‘revisionist’ policies, Labour retained its working-class base by virtue of its institutional links to the trade unions. But in the 1990s, Tony Blair deliberately re-positioned the party in pursuit of middle-class respectability, attacking the trade unions as ‘dinosaurs’.

The long-term impact of those changes is recognised in the election review. Labour lost votes to the Conservatives most heavily among working-class voters, as measured in the polling-company categories known as ‘social grades’ C1, C2 and DE (whereas the losses were less among the better-off AB voters).

The growing evidence that the Conservatives were winning a greater share of the working-class vote was something that many Labour activists and pundits refused to hear in the lead-up to the election. Left-wing ideologues like Paul Mason and James Meadway (former adviser to John McDonnell and a contributor to this report) previously poured scorn on the evidence that the Tories were winning the working-class vote.

Of course, everyone but the Labour Party itself had long known that it was losing its traditional working-class voters, in particular in the fabled ‘red wall’ of northern seats. In recent times, this issue had been raised by Roger Eatwell and Matthew Goodwin in National Populism and by James Tilley and Geoffrey Evans in The New Politics of Class. Patrick Seyd made similar warnings in the 1990s, as did Richard Rose in the 1980s.

spiked and its predecessor, Living Marxism, have been writing about the decline of Labour’s working-class base for more than a decade. I wrote back in 1995 that ‘there are already signs that Labour is not only picking up middle-class votes from the Conservatives, but that working-class Labour voters are not bothering to turn out’. After the 2017 election, drawing on Tilley and Evans’s book, we noted here on spiked that according to the British Election Survey data, ‘working-class support for Labour fell from 60 per cent in 1962 to just above 20 per cent in 2015, with most of that fall coming from the point that Tony Blair rebranded the party New Labour’.

Since Matthew Goodwin’s book on populism showed that there was a marked dealignment of traditionally minded working-class voters away from Labour, the Conservative Party has been poring over it for clues as to how to take those votes. Scores of people from Goodwin to Labour peer Maurice Glasman (and, of course, us at spiked) have been trying to explain to the Labour Party that it was vulnerable. But Labour activists simply would not listen. In 2019, Boris Johnson realised the strategy of taking Labour’s red wall, and he intends to keep it.

Where Labour’s report is a bit more cautious is in spelling out that the gap between the party membership and the voters is a substantial barrier to electoral success. The authors write: ‘Our membership base and areas of high activity are not in the places we needed them.’ That is a coded way of saying that Labour’s members are mostly in middle-class university towns, but thin on the ground in working-class towns.

Sadly, Labour’s wise owls only understand things after the event. Worse, the reason that the party has finally conceded the point in this review is only to distract from facing up to the problems in the 2019 election. Rather than face the consequences of their own choices, the MPs and officials who led the party to disaster are now here to be found saying, philosophically, that the decline in working-class support ‘is all part of a long-term trend’.

The report’s authors – a ‘commission’, no less – are drawn from both the left and right of the party, in an attempt to contain the instinct of the two wings of the party to point the finger at one another. The problem is that both wings are implicated in the failure. That means that this report makes a performance of facing up to problems, without really doing so.

For the party’s moderate wing – now the dominant group since the election of Keir Starmer as leader – the evasion is clear on the central issue of the election: Brexit. The authors perform a ritual of self-criticism when they say that the party’s Brexit policy was unclear – a major understatement. They admit that the party lost the votes of Leavers. But then they soften the critical meaning of that point by saying that Labour also lost a lot of Remain voters, leaving the party in a double-bind. They claim to have seen ‘no conclusive evidence that a more absolute position on either side of the debate would have led to a better net result’.

This is palpably untrue. The Labour Party was in the lead in the opinion polls in February of last year because Theresa May was widely understood to have let the Brexit process stall. If at that point the Labour Party had challenged the government as a resolute ‘Brexit party’, it would have seized the high ground taken by Johnson in December to such devastating effect.

The voters rewarded every party that took a definite pro-Leave position in every single election after the referendum: the Conservatives won in 2017, the Brexit Party won the European Elections in May 2019, and the Conservative Party won the election in 2019 by a landslide. The British voters decided to leave the EU in the referendum and have not shifted from that position since.

The Labour Party, by contrast, was viscerally hostile to Brexit. Since the election, the Labour left have tried to claim that it was the right that saddled them with the position of holding a second referendum. Keir Starmer was indeed the architect of this losing policy as shadow Brexit secretary. But left-wingers like Owen Jones, Paul Mason and John McDonnell sold the policy, too. Indeed, many on the left lauded McDonnell for his supposed strategic insight when he decided to avoid the question altogether and let the Tories ‘own the issue’. ‘You don’t interrupt your enemy when he is making a mistake’, McDonnell said, thinking that leaving the Tories to set the agenda would help Labour.

What the left shared with the centrists was the underlying belief that the voters were at fault for deviating from Labour’s new values – rather than understanding that the working class’s decision to leave the European Union was the right one. Left-wingers could not hear the democratic force of the demand that Britain’s laws be made in Britain. With a remarkable tin ear to the popular mood, the left dismissed all of this as ‘racism’.

The clue that the Labour Party is not yet ready to face up to its problems is that it still insists on negotiating the difference between its different wings, rather than trying to reinvent itself as a popular party.

The party’s programme at the last election was not unpopular in itself – rather it was the unreal way that the policies popped up from nowhere that made them sound implausible. In truth, the incontinent flood of policies was mostly a mask for the party’s policy vacuum over Brexit. Framing new policies had become a displacement activity for a left that was more at home talking to its own echo chamber than it was talking to the public. That was particularly marked in the activists’ love of the Twittersphere. As the report notes: ‘Labour’s supporters online spent too much of the campaign talking to themselves rather than reaching out to convince swing voters to support Labour.’

A delusional belief that they could improve on the 2017 election with ‘one last push’, the activists turned on anyone who raised doubts about the direction of travel. Factionalism, notes the report, was sapping the mood. One member complained that ‘people stopped going to CLP meetings. I used to love them, ended up being a place I dreaded.’ Another activist said that ‘people think we treat people fairly and decently, but that’s not mirrored in our behaviour to each other’.

Labour members do rather too often believe that they are fundamentally good people. But that runs alongside a remarkable contempt for anyone who sees things differently, whether that is political rivals or reluctant voters. In truth, Labour members are not just horrible to one another — far too often they are horrible to everyone else as well.