Populism is a struggle for democracy

Roger Eatwell and Matthew Goodwin’s book is an invaluable guide to the new politics of revolt. 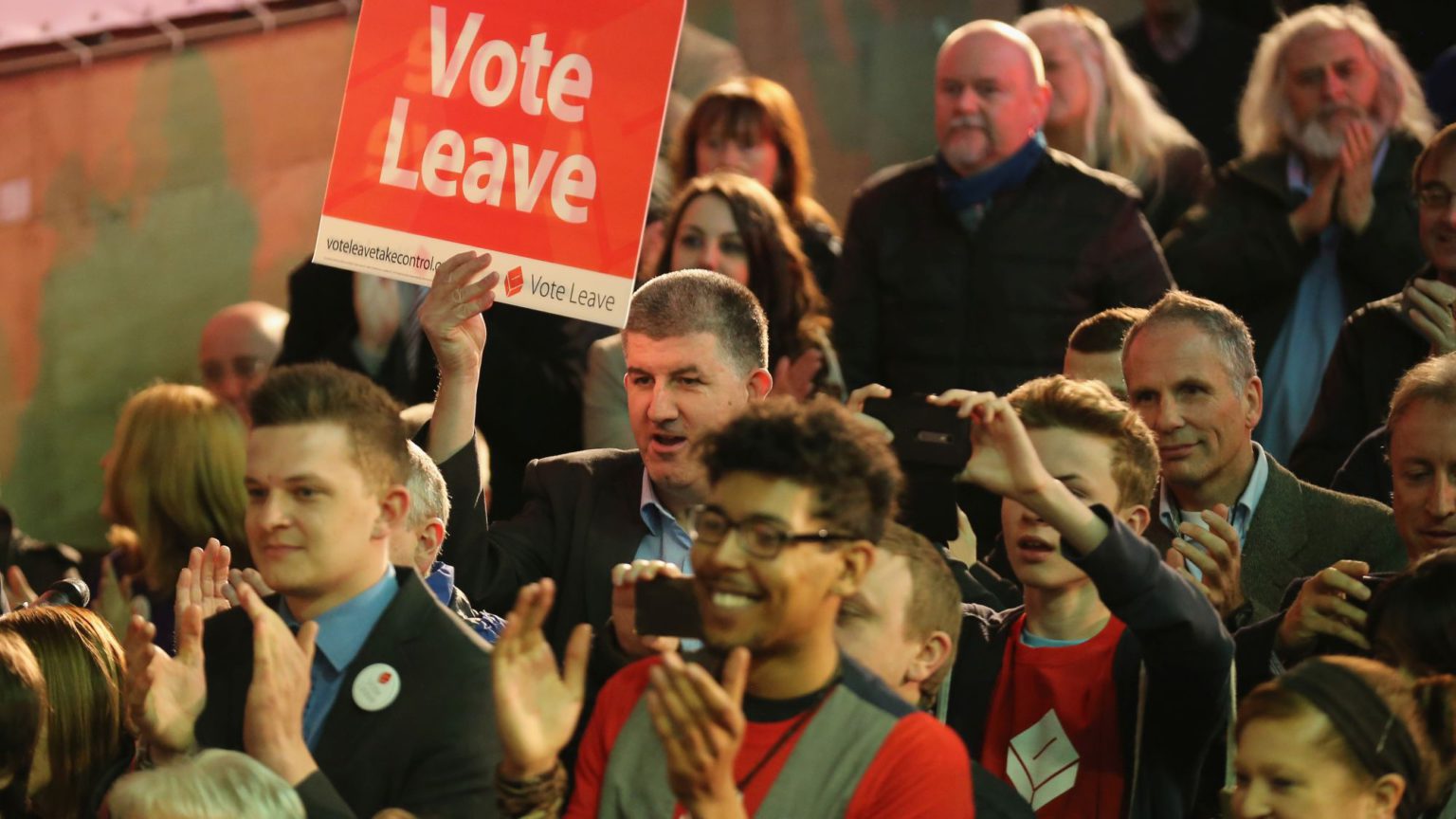 When, in 1974, Britain resolved to hold a referendum on European Community membership, Jean Rey, the ex-president of the European Commission, said: ‘A referendum on this matter consists of consulting people who don’t know the problems instead of consulting people who know them. I would deplore a situation in which the policy of this great country should be left to housewives. It should be decided instead by trained and informed people.’ The dismissive reference to ‘housewives’ betokens an earlier era. But the thrust of Rey’s contempt for the notion of decisions being made by ordinary people, rather than experts and technocrats, shows that the clash between the European project and democracy is not new.

The Rey quote is just one of many facts and arguments deployed by two politics professors, Roger Eatwell and Matthew Goodwin, in National Populism: The Revolt Against Liberal Democracy, to reveal the strain the EU has long placed on democracy. National populism, they argue, contrary to received wisdom, is motored by the people’s desire for greater democracy.

Although the book majors on the tumult of the past few years, Eatwell and Goodwin draw attention to the historic problem that liberalism has faced in accepting democracy. The type of early liberalism advanced by John Locke in the 17th century, for example, focused on the natural right to life, liberty and property, and viewed the collective instrument of government with suspicion. By focusing on individual man in this way — rather than the Ancient Greek notion of ‘political man’ — liberalism was set on a course that ill-disposed it towards democracy. Indeed, from Locke onwards liberalism has always been more comfortable with individual rights than with collective interests like democracy.

Liberal thinking dominated the American Declaration of Independence (1776), which stated that governments derive their ‘just powers from the consent of the governed’. But consent is not democracy, as the declaration’s principal author Thomas Jefferson knew when he held that there was a ‘natural aristocracy’ of publicly minded men who would be chosen for office by an electorate mainly comprised of white, property-owning males. A little later, the American Bill of Rights (1791) gave judges an overriding power, drawn from law rather than the people, to fetter the legislative and executive powers of politicians. Informed by a liberal perspective, the American Constitution developed to embrace an elaborate system of checks and balances that, as Eatwell and Goodwin argue, ‘sought to limit the power of both [presidential] leaders and the people’.

Accordingly, the Founding Fathers did not term America a ‘democracy’, and it was not until the 19th century that use of the word ‘democracy’ spread rapidly in the West. But by then the term was used – as Alexis de Tocqueville had characterised it in his influential Democracy in America (1835) – to mean that the problem of the ‘tyranny of the majority‘ had been solved. Eatwell and Goodwin note that the fear of majoritarian rule was a problem ‘which had haunted Western thinking ever since Plato’, who had argued for rule by an ascetic elite of ‘philosopher kings’. In other words, by the 19th century, liberalism had solved the ‘problem’ of democracy by limiting it with a system of checks and balances overseen by an elite. ‘Liberal democracy’ amounted to the liberal constraints imposed on democracy. It was a system by which the people were passive givers of a limited consent, rather than active participants who truly controlled state policy.

For 200 years after American independence, liberal democracy was rarely questioned in the West. Indeed, as the Cold War ended and liberal democracy spread through the old Eastern Bloc in the early 1990s, the political scientist Francis Fukuyama caught the Zeitgeist with his much-cited claim that the world was nearing the ‘end of history’. Fukuyama famously predicted ‘the end point of mankind’s ideological evolution and the universalisation of Western liberal democracy as the final form of human government’.

But, as Eatwell and Goodwin recognise, ‘history had not read the script’. In fact, the end of the Cold War marked the point at which liberalism and democracy ceased to be allies and became increasingly antagonistic. Without the Cold War, liberalism was unable to use a Communist bogeyman to win popular consent for a free-market society. It needed a new narrative, which it found with political correctness – a set of agendas ‘driven by degree-holding liberals and the young, which are especially focused on identity issues’. Political correctness officially sanctioned certain beliefs in opposition to mainstream majority opinion. As such, political correctness empowered liberalism to double down on its traditional fear of majority opinion, but only by doing so in a more direct and overtly confrontational way.

Alongside the new narrative of political correctness, liberalism renewed its promotion of supra-nationalism, a project that until the 1990s had been developing only slowly after the Second World War. Eatwell and Goodwin describe supra-nationalism as a means of transferring ‘power away from democratically elected national governments to transnational organisations, from politicians at the national level who had been elected by citizens to non-elected “expert” policymakers and lobbyists who operated in the international sphere, beyond the realm of democratically accountable politics’. Examples of this process include the Maastricht Treaty of 1992 and Tony Blair’s New Labour government passing of the Human Rights Act in 1998. The former turned the Common Market into the European Union, established EU ‘citizenship’ and laid the basis for the Euro, while the latter required swathes of public policy to be subjected to legal oversight by increasingly activist European judges.

For many years after the Cold War ended, liberalism’s attachment to the twin pillars of political correctness and supra-nationalism brought it a measure of success in establishing a political elite that controlled much of the state apparatus and many middle-class institutions of civil society. And, for a time, many people did not seem to notice or care. But liberalism had hitched itself to a ticking time-bomb by morphing from a theory that had sought to contain democracy to one that was hostile to it. Throughout the modern democratic era, which began with American independence, the governing class had sought to stay in touch with popular opinion so that it could legitimately claim to be representative of the people. But towards the end of the 20th century, the governing class came to define itself by its hostility towards popular opinion. Over time, the representative governing class became an antagonistic elite.

In 2016, the gulf between the people and the elite was brought into sharp focus when the people voted for Brexit and Trump. Eatwell and Goodwin stress that these votes were not, as the many critics of populism contend, merely the rage of ‘angry white men’; rather, they were expressions of opinion by a broad strata of society that desired greater democracy and control over their lives. As such, today’s national populists resonate with society by connecting with what Trump calls the ‘silent majority’, Farage ‘the people’s army’, and Le Pen ‘the forgotten France’. These movements are not ephemeral. Indeed, Eatwell and Goodwin correctly argue that the elite’s dismissive response to populism will merely fortify it.

National populism caught most commentators by surprise. But by locating it within the context of liberalism’s historic and uneasy relationship with democracy, Eatwell and Goodwin give us the theoretical framework to understand national populism’s rise. Furthermore, the authors show why liberalism needs to find a way of embracing democracy. For unless the gulf between the elite and the people is bridged, the elite will simply become more elite and the people more determined to regain control of their futures.

Eatwell and Goodwin conclude that national populism ‘will have a powerful effect on the politics of many Western countries for many years to come’. Those who want to understand just how powerful would do well to read their compelling analysis.

National Populism: The Revolt Against Liberal Democracy, by Roger Eatwell and Matthew Goodwin, is published by Pelican. (Buy this book from Amazon(UK).)