Covid hysteria is destroying public spirit. We have to reverse this right now. 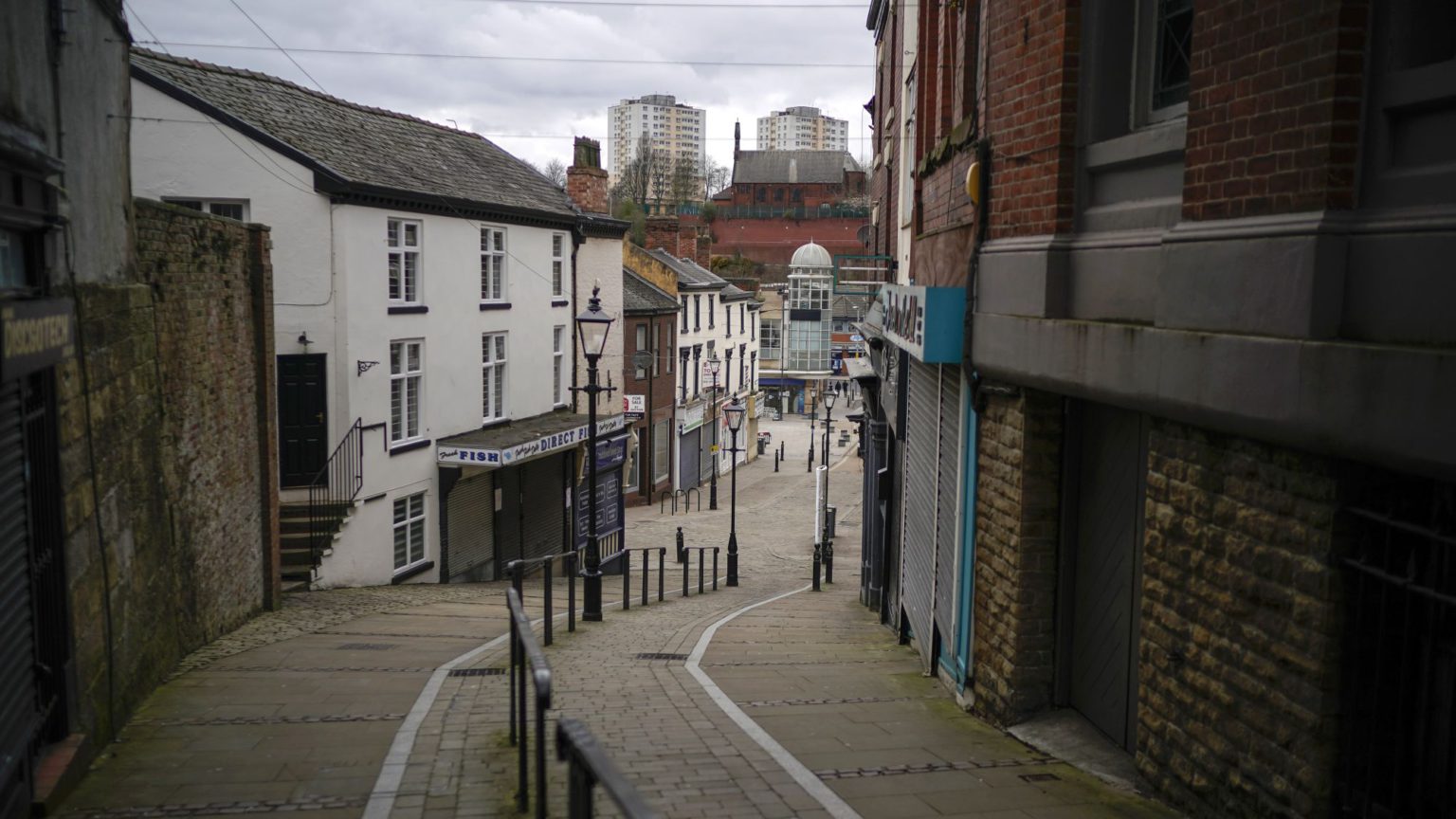 A very striking thing has happened in British politics over the past couple of weeks: the liberal elite has suddenly fallen in love with public opinion.

The very politicos and observers who spent the past four years demonising public opinion and seeking to overthrow the largest democratic vote in the history of the UK – the vote for Brexit – now cheer the public for supporting the lockdown and feeling fearful about going back to normal life.

What a revealing insight into how this section of society relates to the people. When we behave as a genuine public, engaged in a free and open democratic contest over the political future of the country, they brand us stupid, brainwashed, possessed of bad, untrustworthy opinions. But when the people are no longer a proper public, and instead have been broken up into atomised households, firmly kept away from the public realm by authoritarianism and fear, they love what we have to say. They can’t get enough of it. Lockdown sceptics are ‘out of sync with public opinion’, trills one of those commentators who spent years casually arguing for the elite to overthrow the largest act of democratic public expression this country has ever known.

On one level, this can be seen as a simple case of people flagging up polls that seem to support their own worldview. We all do that. And the liberal elite has been uniformly in favour of a Chinese-style lockdown of society and the economy. Indeed, the media classes played a not unimportant role in pushing Boris Johnson towards a society-wide lockdown. So it is not surprising that, following years of disdaining public opinion as ill-informed, racist and too susceptible to the tricks of demagoguery, they now cite the public’s views regularly.

For the public seems to support the lockdown, too. To such an extent, in fact, that it is apparently worrying some government officials, who fear many members of the public may be reluctant to return to normal life even when the Covid threat has been significantly reduced. The latest Ipsos Mori polling finds that more than 60 per cent of us would feel uncomfortable about going to bars or restaurants or getting on public transport once the lockdown has been lifted. Forty per cent would feel unhappy about sending their kids to school. More than 30 per cent would be reluctant to return to work or meet friends.

This is the public opinion being cheered by the pro-lockdown left and by comfortably off members of the liberal elite who can still work from their large houses even as the rest of society grinds to a halt: a public opinion that is fearful, distressed, dazed by the prospect of returning to normal work life, social life, and public life. A public opinion that is not really public opinion at all, but rather is a collection of fearful views expressed by individuals who have been expelled from the public realm and who are literally prevented by law from gathering in public, taking part in political protests, or engaging in industrial action.

This is the ‘public’ that the liberal elite admires: a Potemkin public, a pretend public, a public that has been fairly successfully decommissioned and placed under something approaching house arrest. That liberals and leftists raged for years against a clear, confident and real act of public engagement (the vote for Brexit) and now cheer a hyper-fragmented ‘public’ as it expresses dread about the prospect of a return to normal life is incredibly, historically revealing.

It helps to explain their keenness on the lockdown. It suggests that one of the key things these people admire about the lockdown is that it has broken the public. It has retired those swathes of society that proved so disappointing to the elites in recent years, whether by their political choices or their apparently problematic lifestyles. The public-sector left, the woke-leaning elites and the Remainer wing of the establishment are generally favourable towards the lockdown not only because it has less of an impact on their lives than it does on other people’s, but also because it makes physically, legally real what they consider to be the ideal relationship between their class and the rest of us – that is, one in which they can still proffer their ‘expertise’ and advice on how the masses should be cared for and financed, while the rest of us are silenced, by law, and have been reduced essentially to non-citizens who must await the favour and instruction of the government and our betters.

Witness the excitability with which sections of the left have talked about the massive state spending in relation to Covid-19. This proves the importance of the state, they say. It shows that Universal Basic Income is possible, they claim. Some, including Jeremy Corbyn himself, cite the current situation as proof that their welfarist worldview was right all along. They are almost saying ‘Comrade Covid’, taking pleasure in the way that a virus has made real the political set-up they have long dreamt of: one in which the state has extraordinary power in relation to people’s lives and incomes, and in which the rest of us accept this as the natural order of things.

It’s remarkable: in the fear and defeatism being expressed by the decommissioned public in relation to Covid-19, these people glimpse the pacified, grateful public in receipt of state largesse that has for a long time fuelled their political fantasies and political activity.

Some of them use noble-sounding language to justify and celebrate the unprecedented use of law, policing and fear to break up the public and keep us all at home. They say the people are engaged in an act of ‘solidarity’. Staying at home is heroic, they claim. It shows how much we all care. This is entirely false. Solidarity is when active, engaged citizens recognise their commonalities and offer one another assistance in the pursuit of a political goal or a social good. Like the vote for Brexit, for example, which was a clear, free and public demand for more forms of social solidarity against the disempowering dynamic of technocratic rule and the individuating trends of neoliberalism. In contrast, the current fearful retreat from the public realm speaks to an atomised torpor that is the opposite of solidarity, and in which one of our few ‘public’ roles is to agree not to be a burden on the NHS. Stay home, do nothing, don’t impose on the system – this is compliance with authority, not solidarity.

Of course, there are glitches, hopeful glitches, in the culture of compliance nurtured in relation to Covid-19 and celebrated by the anti-democratic left and anti-masses elites. Not everyone is happy with the lockdown, of course. Surveys by King’s College London suggest that people can be split into three categories: we are accepting, suffering or resisting the lockdown. King’s says 48 per cent accept the lockdown, 44 per cent are suffering through it, and nine per cent are resistant to it. And even as the public has been broken up there have been acts of genuine solidarity, most strikingly through the setting-up of WhatsApp groups across the country in which people assist neighbours and look out for the vulnerable.

But while that’s all good, there is no avoiding the larger problem of compliance, resignation and retreat into the non-public realm. It is not surprising that this culture is being celebrated by sections of the liberal elite, for, fundamentally, it represents the very thing they failed to achieve over the past four years: the victory of fear over public spirit. Where their Project Fear in relation to Brexit was not successful, Project Fear in relation to Covid-19 has been. But that is what makes this all so destructive. Covid-19 is impacting on many people, as we know, but officialdom’s response to Covid-19 is having a devastating impact on public spirit and public life. Having unleashed fear, having convinced people that it is dangerous to go outside, having informed us that other people are a grave threat to our health and even our lives, the powers-that-be cannot now be shocked that the broken, over-policed public feels trepidation about returning to work, production and life. Existential dread is easy to push out, but difficult then to contain.

The destruction of public life and public engagement would be one of the worst consequences of the coronavirus crisis. It threatens to have dire impacts on social solidarity, social confidence and democratic citizenship that could outlast the virus itself. We need to reverse this damaging culture with urgency. Nothing less than an overhaul of the political narrative and an unflinching questioning of the culture of fear is required. Only by questioning the authoritarian new corona-laws, questioning the lockdown, questioning the idea that this virus outbreak is an apocalypse, and questioning the notion that the breaking-up and silencing of the public is an act of ‘solidarity’ can we begin to restore public life.

We have two fights on our hands: a medical, discrete fight against a novel virus, and a political fight against elites who relish rather too much the current suspension of political life, economic life and public life. We are not mere disease-carriers; we are also workers, producers and members of communities that can stand up to viruses and other threats together. In decommissioning the public, our society has destroyed its own best resource when it comes to dealing with crises. That’s enough – unlock the people.