The madness of comparing the Brexit Party to the Nazis 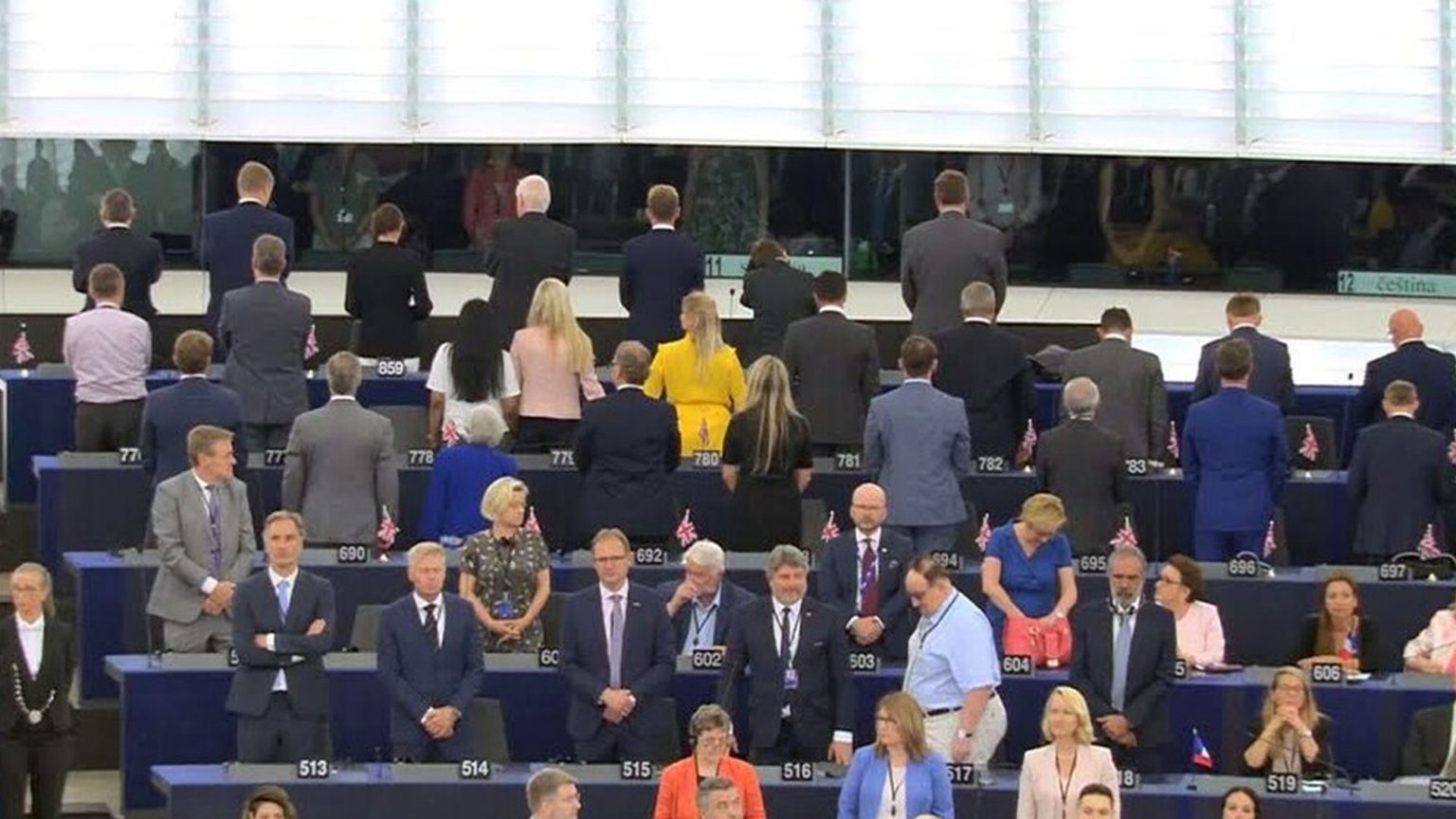 I fear for the stability of hardcore Remainers. They seem to be losing the plot. They have abandoned all sense of moral perspective. Consider their response to the Brexit Party’s protest in the European Parliament yesterday.

The BP’s MEPs turned their backs as the EU’s ‘national anthem’ started to play. And according to certain Remainers, such antics are akin to Nazism, echoing the behaviour of National Socialists in the Reichstag in the 1930s, and generally proving that Brexit Britain is a dark and scary hellhole vomiting up the worst politicians the world has seen since the darkest days of the mid-20th century.

To which the only reasonable reply is: u ok hun?

This was a perfect example of a furious, spluttering condemnation telling us far more about the person doing the condemning than about the people he or she is condemning. In this case, Remoaners’ shrill and illiterate screech of ‘NAZIS’ at the Brexit Party for staging a political stunt tells us nothing whatsoever about the Brexit Party but loads and loads about the increasingly on-edge Remainer set.

It tells us how distant they now are from people who think differently to them; how bitter and convulsed with fury they have become as democratic politics has dared to go in a direction they disapprove of; and how little they care for historical accuracy and truth.

No sooner had the BP’s 29 MEPs turned their backs on the young people playing Beethoven’s Ode to Joy – imagine such a wonderful, humanistic work being co-opted by the grey technocracy that is the Brussels machine – than observers were thumbing their thesauruses in search of furious adjectives of condemnation.

Former TV journalist turned campaigner against democracy Gavin Esler said the Brexit Party had ‘shamelessly copied the Nazi Party’, on the basis that the Nazis once turned their backs on a Jewish speaker in the Reichstag in 1930. This is mad. The Nazis also published political pamphlets – is everyone who does that a Nazi? They wore uniforms and marched in formation – maybe all armies are fascist? They also overrode the democratic wishes of vast numbers of European people – perhaps Esler and his anti-Brexit, anti-democratic chums in that short-lived outfit Change UK are also secret Nazis? What an infantile game.

It got worse. One journalist said the BP back-turning made her cry. Others said it made them feel ashamed to be British. Britain is a nation known for its fair and honest engagement with the world and now these 29 xenophobic oafs have destroyed that reputation, Remainers cried. The people of Iraq, Afghanistan, Syria, Libya and Yemen – the ones who are still alive, at least – might beg to differ about that British decency thing.

Everyone shared a photo showing the BP back-turners alongside the Nazi Party back-turners as a kind of sixth-former-level ‘gotcha’ – ‘We knew you were fascists!’. It really is hard to believe that these people think this is a normal form of political debate. One Irish academic shared a Goebbels quote about the Nazis entering parliament as ‘enemies’, as ‘the wolf bursts into the flock’, and the moral infants of the hardcore Remainer set rubbed their chins in unison and said: ‘Yes! Exactly like the Brexit Party. Farage is our Goebbels.’

Everything about this is crazy. And chilling. Let’s get this in perspective. A political party that won more than five million votes in the EU elections in May and which is now the largest party in the EU parliament is not being anti-democratic, far less fascistic, when it engages in protest inside that parliament. On the contrary, it is behaving democratically. It is making a democratic political statement. In this case, that it is wrong, outrageous even, that Britons are still expected to send members to the European Parliament more than three years after we voted to leave the EU. The protest was saying, ‘The UK should not be in this parliament’. Nothing more, nothing less. Nothing hateful, nothing xenophobic, nothing Nazi-esque.

No light was shone on the Brexit Party by yesterday’s fuss and fury, but a great deal was shone on those sections of the Remainer elite that are absolutely committed to thwarting Brexit, and by extension democracy itself. These people are now so ensconced in an opinion-proof, dissent-proof echo chamber that they view everyone outside of that chamber – which is the majority of people – as an alien being, the lowest of the low, an actual Nazi, scum.

The chattering class’s branding of Brexiteers – as well as right-wing people, Trump voters and populists in general – as ‘fascists’ or ‘Nazis’ is really a form of dehumanisation. It ‘others’ people completely. It says, ‘These people are beyond political debate and moral reason. They are the same as the worst people in human history.’

It is an entirely intolerant approach to political difference and discussion. In an eye-watering irony, it does the very thing they accuse ‘the new Nazis’ of doing – it others entire groups of people, especially the less well-off people who were more likely than educated, upper-middle-class people to vote for Brexit. It seeks to override the democratic wishes of these Untermensch and re-install the rule of well-educated, well-connected experts.

I would never refer to Remainers as Nazis – because I am not an historical illiterate who thinks anyone who disagrees with me is a fascist – but seriously, if you want to centralise political power in Europe, thwart the largest act of democracy in UK history, put the little people back in their box, and demonise those who disagree with your or protest against you, then you should definitely think twice before calling other people fascists.

Perhaps the worst thing about the ‘Nazi’ screams at the Brexit Party yesterday is the way this normalises the Nazis. This is the most nauseating side-effect of today’s constant use of the ‘fascist’ slur and the never-ending warnings that Europe is sliding back into the 1930s – the fact that it drains away the uniqueness of the Nazi era, the sheer horror of it, and makes it appear as just another political period, not unlike our own. This relativisation of the era of the Holocaust is a crime against historical truth.

Indeed, it is in itself an unwitting, inverse form of Nazi apologism. In making the Nazi era seem mundane, as if it consisted simply of disagreeable politicians executing stunts, as if it was very much like what we face in 2019, the angry elites do Nazism itself a favour by denuding it of its unprecedented evil and making it seem ordinary. They’re whitewashing Nazism, and that is the most unforgivable aspect of their unending hissy fit over the 2016 vote to leave the EU.