The cowardice of Tory Brexiteers

Johnson and Rees-Mogg are capitulating – we shouldn’t be surprised. 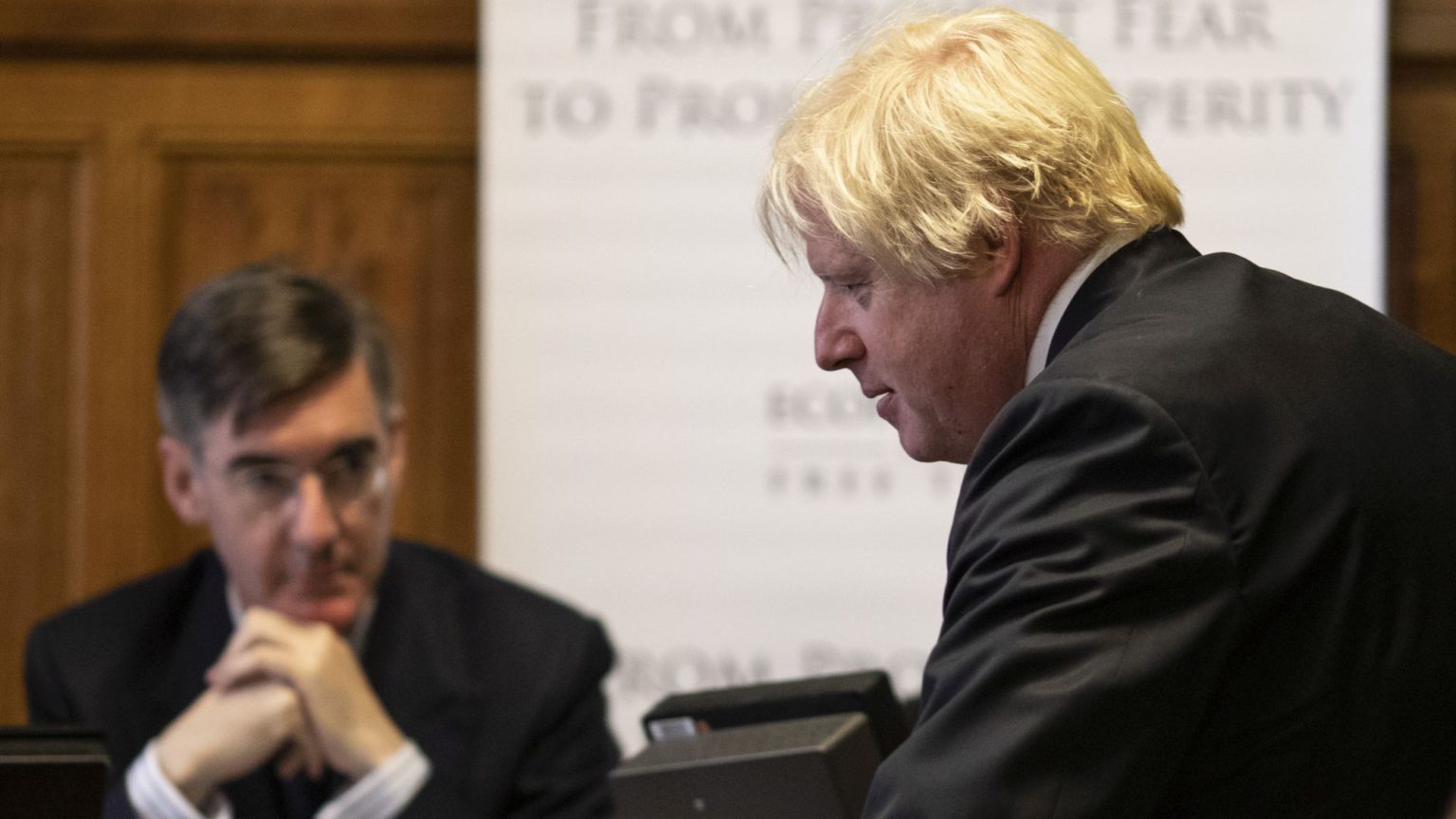 ‘I could tear this place down and bulldoze it into the river.’ So said Steve Baker last night at a meeting of the European Research Group of pro-Brexit Tory MPs. It was just after PM Theresa May had told her party she would step down if her sell-out Brexit deal was passed – leading Vote Leave leader Boris Johnson and other Tory Eurosceptics finally to come on board. Baker referred to MPs, who had spent the afternoon debating their preferred plans for killing off Brexit, as ‘fools and knaves and cowards’. He spoke to a rage that many of us are feeling – though, if I’m honest, another c-word more frequently comes to mind.

Cowardice, incompetence and humiliation have each at different points defined the Tories in this Brexit process. Yesterday we got a taste of all three. ERG leader Jacob Rees-Mogg wrote in the Daily Mail that he would potentially back May’s deal, a deal he had spent the past few months decrying, rightly, as ‘vassalage’. Boris Johnson also made his hitherto hinted-at support official, less than 24 hours after telling the audience at a Telegraph event that the deal is worse than EU membership. As ‘indicative votes’ on alternative Brexit plans got underway in the Commons, things seemed to be looking up for May. The threat of Brexit getting softer was testing Brexiteers’ resolve. Though she had to pledge to resign to get there, the chances of her deal passing seemed to be increasing. But later in the evening, the DUP said it still cannot support it, sinking the deal again for now.

Meanwhile, Remainer MPs across parliament showed that they, like May, are as useless as they are anti-democratic. The indicative votes were the brainchild of Tory MP Oliver Letwin, whose amendment this week allowed MPs to seize control of Commons business to debate and vote on different Brexit options. This, Remainer MPs and commentators said, was the grown-ups finally asserting themselves. A ‘sensible compromise’ (translation: more thorough betrayal) would no doubt be in sight. But after all the ballots were counted precisely zero of the eight alternatives won a majority. That said, the results did remind us which way the wind is blowing – a second Brexit referendum took the largest number of votes, and a permanent customs union came the closest to winning a majority.

What a mess. Yesterday proved yet again that MPs are determined to thwart Brexit, but lack the courage or nous to pull it off cleanly. But this has been clear for some time. What was more striking was what utter cowards many leading Tory Brexiteers have shown themselves to be. They argue that things have changed now that No Deal has been kiboshed, that having thrown away our last bit of leverage, and our final route to a clean-break Brexit, things can only get softer. The choice now, they say, is between May’s deal and no Brexit at all. It would be a compelling argument if May’s deal wasn’t also no Brexit at all. Worse, as many of them have gone hoarse saying, it would leave us with less say over the EU rules that bind us than we currently have. Voters wanted to take back control – this deal would give more away. This is not a compromise.

May’s vow to step down and let another leader take on the trade talks also helps nothing. We would still be stuck with the Withdrawal Agreement, including the backstop, which could trap the UK in the EU Customs Union indefinitely. We would still have paid the EU £39 billion in exchange for zip. Having managed to screw us on withdrawal, the EU would set about screwing us on trade. Plus there is no guarantee that a committed Brexiteer would even become the next leader, let alone have the support in parliament to chart a more Brexity course. Candidates have to get through Tory MPs before they are put to the members. Many of the leading Brexiteers are, to put it mildly, divisive in the parliamentary party. Nothing would change.

What choice do Brexiteer MPs have, many will ask? They have the choice to stick to their guns. The bitter truth is that parliament, the opposition and the government are refusing to implement the people’s will. That the best we can possibly hope for is subjugation to the EU rather than membership of it is perverse. You can either be an accomplice to this betrayal or you can continue to oppose it. Resign the whip if necessary. Tory Brexiteers are not mounting some tactical retreat, they are surrendering, perhaps with an eye to their future careers in the party. Perhaps like fellow Eurosceptics John McDonnell and Jeremy Corbyn they have decided that holding on to power and influence in their party is more important than principle.

One of the tragedies of the Brexit process is that this rump of Tory MPs have become the Leave vote’s last line of defence. It reminds us how distant MPs, who split for Remain by two-thirds, are from the public, and how little influence committed Leavers have on Brexit’s passage through parliament. But also they are simply not up to this fight. They are tactically clueless, as their botched attempt to sack May in December showed. They are still creatures of the old party politics, mired in factional interests and game-playing, while wrestling with an issue that cuts across party lines. But more importantly, they are still Tories. They lean towards pragmatism and compromise. And, with a few noble exceptions, they see Brexit in often narrow policy terms – as a shift to free trade and regulatory autonomy, rather than a bottom-up revolt for more democracy.

These Tory Brexiteers seem as terrified of the people taking back control as anyone else. And these elite Leavers, these men and women of wealth and influence, have far less to lose if the democratic cry is silenced.