The militarisation of anti-Semitism

Blaming Trump for the Pittsburgh massacre downplays the scale of anti-Semitism today. 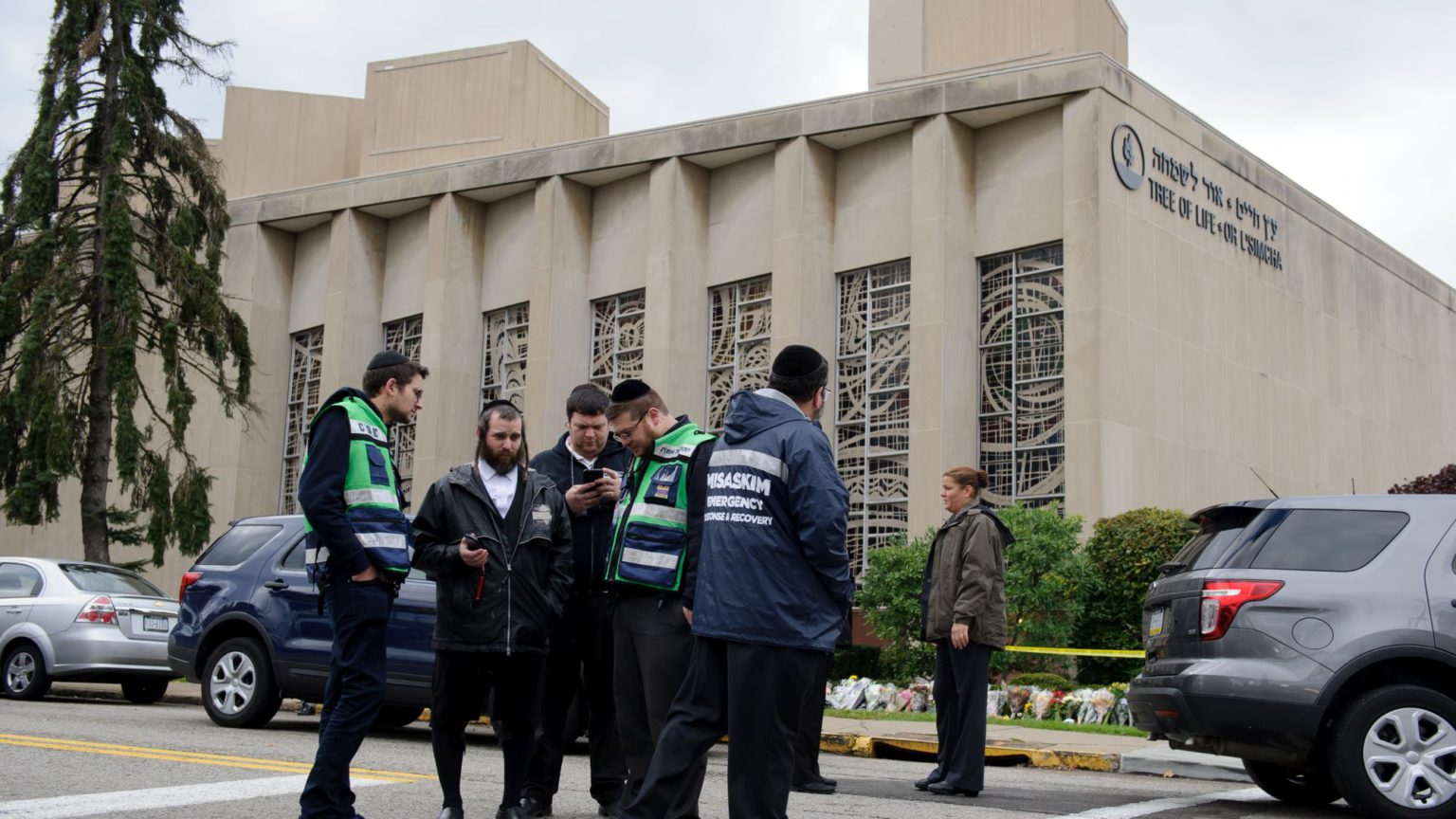 And still people are downplaying the seriousness of anti-Semitism. Even now. Even following the worst attack on Jews in American history. Even after the slaughter of 11 mostly elderly Jews at a bris, the celebration of the birth of a child, at the Tree of Life Synagogue in Pittsburgh.

This time they are diminishing the scale and depth of anti-Semitism by pointing the finger of blame for the Pittsburgh massacre at President Donald Trump. No sooner had Robert Bowers allegedly executed his act of racist mass murder than anti-Trump commentators were describing it as the bloody offspring of Trump’s supposedly white-nationalist worldview and his divisive rhetoric.

This slaughter was the ‘inevitable result’ of ‘Trump’s vile nationalism’, said the Nation. Inevitable. ‘Trump didn’t pull the trigger on Jews in Pittsburgh, but he certainly prepped the shooter’, says a writer for Haaretz. Hateful violence like this is a consequence of Trump’s rhetoric, says British columnist Mehdi Hasan: ‘He preaches hate. He incites violence. He inspires attacks.’

This rush to blame Trump for a massacre of Jews is not only profoundly cynical, where the militarisation of anti-Semitism is pounced upon to the cheap, low end of scoring points against a politician people don’t like.

It also has the effect of whitewashing the true horror of anti-Semitism in the 21st-century West. It is in itself a form of apologism for the new anti-Semitism to the extent that it dehistoricises and depoliticises it by presenting it as little more than a function of the new right-wing populism.

It presents violent anti-Semitism as yet another thing unleashed, or at least intensified, by Trump and by the political turn of the past two years. And this dangerously distracts public attention – purposefully, I suspect – from the fact that anti-Semitism has been growing and becoming increasingly militarised for more than a decade now, among the left as well as the right and within Muslim communities, too.

Post-Pittsburgh, it is hard to escape the conclusion that many observers are more interested in shaming and weakening Trump than they are in truly getting to grips with the new anti-Semitism. After all, where was their rage, their concern about rhetoric, their existential handwringing over hateful ideas and hateful language, back when anti-Semitism was deepening and militarising pre-2016, pre-Trump, most notably in Europe?

Back when four Jews were slaughtered at a deli in Paris in 2015. Or when a gunman attacked the Great Synagogue in Copenhagen in 2015, during a bat mitzvah, killing one. Or during the massacre at a Jewish school in Toulouse in 2012, in which a rabbi and three children were murdered. One of them was an eight-year-old girl: the anti-Semitic perpetrator grabbed her by her hair and pushed his gun into her face. It jammed when he pulled the trigger. He changed weapon and shot her in the temple. He shot her in the face for the crime of being Jewish.

Or during the Molotov cocktail attack on a synagogue in Gothenburg last year, during which 30 people had to flee to a basement to escape the missiles. Or when a synagogue was firebombed in Düsseldorf in 2014 by Muslims seeking vengeance for Israel’s actions in Gaza. Or when a Holocaust survivor was stabbed to death by anti-Semites in France earlier this year. Or when there was an attempt to burn down the Exeter Synagogue, the third oldest in England, in July this year. Or during any of the other thousands of anti-Semitic attacks in Europe in the past decade, which all have spoken to a terrifying situation where anti-Semitism has now crossed the line from racist incidents into an increasingly militarised effort to demean and dehumanise the Jewish people and their institutions.

One problem, of course, is that many of these attacks – notably the deli massacre, the Toulouse massacre, and the attempted Copenhagen synagogue massacre – were executed by radicalised Muslims. And we don’t criticise them too harshly, right? That would be a form of Islamophobia. It has in recent years been treated virtually as ‘Islamophobic’ to focus too much on the growth of militarised anti-Semitism in 21st-century Europe.

At the same time, there has been a deepening of anti-Semitic feeling among both the new left and the hard right, in both Europe and the US. Indeed, one thing the supposedly PC left shares in common with the alt-right that they claim to despise is a suspicion of Jews and a strange, deep, often hysterical hostility towards Zionism. Both subscribe to a conspiratorial worldview that says an all-powerful Jewish Lobby (or Israel Lobby, if you’re more PC) exercises huge influence over the political life of the West.

This is the bottom line: if you did not respond to the slaughter of Jews by Islamists with expressions of profound concern about the nature of political life today, about the threat posed by hateful ideologies, about the safety of Jews in an era of nasty rhetoric, then there is no reason why anyone should pay attention to what you say about the slaughter of Jews by a white, hard-right individual. Because it looks very much as though your concern is less with the slaughter of Jews than with the question of who is slaughtering them, and whether or not the murderer’s identity lends itself to the propagation of your own narrow party-political worldview. In this case, that Trump is a bad person. The wickedness of an anti-Semitic act is judged according to the act’s political usefulness: how awful that is.

In fact, it’s even worse than that. It is even worse than a situation where people check the identity of the anti-Semitic terrorist before deciding whether to make a big deal of his racist terror. Too often, as anti-Semitism has grown in Europe and the US in recent years, many so-called progressives have looked the other way. Don’t exaggerate the problem, Corbynistas have said. Perhaps some of those attacks on synagogues are political responses to Israel’s military behaviour, as a court in Düsseldorf actually ruled. Maybe the public murder of four Jews at the Paris deli was not really anti-Semitic but rather was driven by fury with Israel, as British observer Karen Armstrong argued. Perhaps if we speak too loudly about Islamist anti-Semitism we will contribute to anti-Muslim feeling. So perhaps we shouldn’t. Perhaps we should just keep quiet about the growing storm of anti-Semitism.

In this way, much of the left and some liberals have acquiesced to the rise of anti-Semitism. They have opted for maintaining the ‘multicultural’ peace over interrogating new cultural tensions and asking why Jews are being firebombed and murdered.

And this acquiescence, this failure to make a big, historic, political issue of the new militarisation of anti-Semitism, has acted as a green light to further expressions of this racist hatred. This is the most galling thing about the response to Pittsburgh: many in that section of society that is pinning the blame for the massacre on Trump actually have some serious questions of their own to answer about why they have not confronted the new anti-Semitism, and the role their moral failures may have played in allowing the new anti-Semitism to flourish. Trump ‘prepped the shooter’? It seems more likely to me that respectable society’s failure to confront anti-Semitism did that.

Indeed, Bowers’ own social-media output suggests he was more influenced by the shared left / right / Islamist conspiracy theory about Jewish power than he was by Trump’s divisive commentary. He was critical of Trump, on the basis that the president was granting Jews too much influence and presence in the US. This, worryingly, is now a mainstream view. You see it in Guardian cartoons showing Israeli leaders puppeteering Western politicians. You hear it in leftish panic about an all-powerful Israel Lobby. You see it in Press TV headlines about the US being ‘completely under the thumb’ of Zionists. Jeremy Corbyn, leader of the UK Labour Party, worked for Press TV. For years.

If you look at the fascistic slaughter in Pittsburgh and see only the problem of Trumpism, then you are being wilfully blind; politically and morally blind. For in this assault we see scarily mainstream views being given a violent expression and we see merely the latest step in a militarisation of anti-Semitism that has been growing for years. Ultimately, only one person bears responsibility for the massacre. The rest of us, however, have a moral responsibility to be honest about the rise of anti-Semitism and to treat it, finally, with the seriousness it deserves.