How long must they lord it over democracy and press freedom?

Their latest assault on the press should sound the death knell for the Lords. 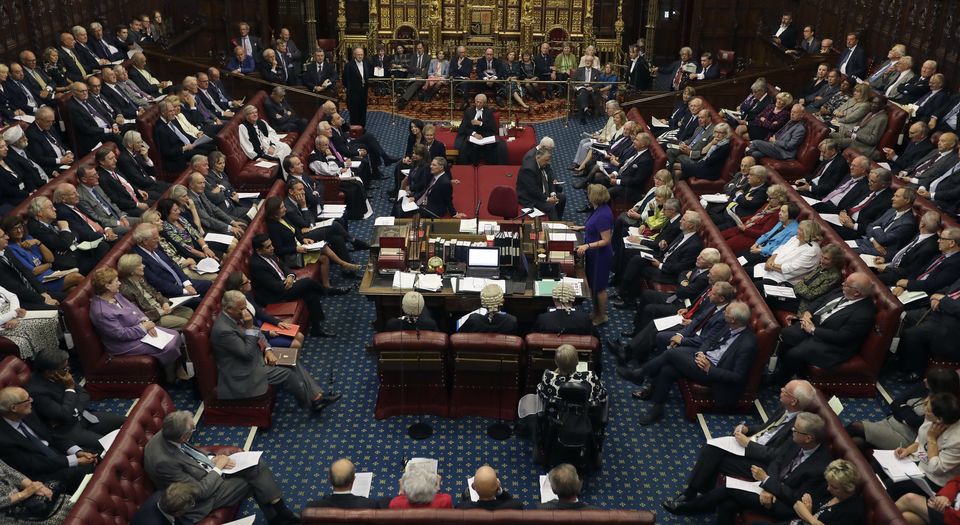 I only ask because the notion of the unelected, unaccountable House of Lords attacking democracy and trying to impose stricter state control of press freedom surely ought to belong to a different age, 200 years ago.

Yet today the lords are up to their old tricks again, seeking to undermine our two most precious liberties – democratic rights and freedom of expression.

For more than 18 months the House of Lords has been a focus for those seeking to undermine or overthrow the democratic vote for Brexit. In the words of Tory Baroness Wheatcroft, those 800 unelected peers are best placed to reverse the votes of 17.4million revolting Leave voters because they have ‘no constituents to fear’. Labour Remainer Lord Adonis recently swore to use the Lords to ‘sabotage’ Brexit.

Now the House of Lords has passed two amendments to a Data Protection Bill that would criminalise much investigative journalism and blackmail the free press to submit to a system of state-backed regulation.

Anybody with a liberty-loving bone in their body should reject the Lords’ latest assault on press freedom – starting with MPs in the House of Commons, where the Tory government says it will overturn those amendments, but opposition parties led by Jeremy Corbyn’s Labour are all for them.

This battle should also remind democrats of the need to complete the broader unfinished business of history. The long-overdue abolition of the House of Lords should be part of the fight to ‘take back control’ not just from the EU, but from the UK’s in-house political elites.

Led by Labour lords, a couple of hundred press-hating peers sneaked their amendments into a Data Protection Bill that was supposed to protect individuals from abuse by powerful organisations. But the effect will be to protect the powerful from having their abuses of power exposed by the media.

By 238 votes to 209, the unelected Lords told the government to set up a version of ‘Leveson II’, a second stage of Lord Justice Leveson’s tabloid-bashing inquiry. This would supposedly probe historical relations between press and police – but the inquisition would focus exclusively on the misdeeds of the press, not the police or politicians.

As spiked argued from the start, the huge Leveson inquiry into the entire ‘culture, practices and ethics of the press’ was a showtrial in which the tabloids were found guilty before proceedings even began. The authorities then sought to pursue their vendetta through the courts, arresting dozens of tabloid journalists in dawn raids and prosecuting many not primarily over phone-hacking, but for paying whistleblowers for stories which the government wanted kept secret. However, the juries took a different view than Lord Justice Leveson and found almost all of them not guilty of anything more than doing their job as journalists.

It is now more than five years since Leveson’s report, and over a decade since any UK journalists were found to have hacked phones. What purpose would it serve to drag the beleaguered British press through another drawn-out, expensive showtrial? As one Whitehall source told the Sun, the House of Lords amendment just looks like ‘past-it politicians settling old scores’.

In short: Vengeance is Ours, sayeth the Lords!

The second Lords’ amendment is if anything even worse. By just 211 to 200 the unelected Lords voted to force any news outlet sued for alleged data-protection breaches to pay their own and their opponent’s court bills – even if they win the case!

Until now, journalists have been protected if they can show they breached data-protection rules in pursuit of a ‘public interest’ story. The Lords’ proposed new law would limit such protection to news organisations signed up to Impress, the official regulator set up after Leveson via Royal Charter – the first state-backed system of press regulation in Britain since Crown licensing was abolished in 1695.

The Lords amendment on data protection is intended to force the free press to bend the knee to regulation by Royal Charter through legalised blackmail; either they sign up to Impress, or they risk being hit with the kind of punitive court costs that could bankrupt smaller and local publishers.

These amendments pose a dire danger to investigative journalism, already under threat. News reporting is all about revealing truths that somebody wants hidden. ‘Data protection’, like privacy, might be a legitimate concern. But exploiting these concerns as the pretext to impose tighter legal limits on investigative journalism is another matter. As the National Media Association – which represents national, regional and local media – says, ‘The amendments would give powerful claimants with something to hide fresh ammunition to pursue legal claims and shut down legitimate public-interest investigation into their activities’.

But what could such upstanding pillars of respectable society as members of the Lords possibly have to hide?

Plenty, it seems. Last year the Mirror revealed that some peers had collectively claimed £400,000 in expenses without ever speaking in the chamber, with tales of one leaving a taxi meter running outside while he nipped in for a minute to pocket his £300 tax-free daily handout.

The Mail has just reported that more than a third of the peers who voted for these amendments have been caught in ‘major scandals that were originally exposed by the media they are now seeking to muzzle’:

‘They include two convicted criminals, 52 who were caught exploiting the expenses system, 18 named in lobbying scandals, and 14 more who have been accused of sexual or financial sleaze. Several have been suspended from the Lords because of their misdemeanours, and more than 10 have been required to repay money they wrongly took from the taxpayer.’

The idea of unelected lords changing the law to protect themselves from exposure by the insolent ‘popular’ (a boo-word in those circles) press has no place in a modern society.

The Lords attack also poses a wider danger to democracy. Critics often focus on the parasitical habits of idle, expenses-soaking peers. Yet these measures confirm that the peers who do turn up to speak and vote are even more of a menace than those who don’t.

The unelected, unaccountable upper chamber is the embodiment of anti-democracy. Almost 250 years ago the English radical Thomas Paine condemned the Lords as the outdated ‘remains of aristocratic tyranny’. Today only 92 hereditary peers remain among its 800 members. But it is no more democratic or representative than in Paine’s day.

Why else would the Lib Dems, reduced to 12 elected MPs, have a hundred appointed peers swanning about in the House of Lords? Remarkably, the place is now stuffed with around 200 more unelected peers than it was after Tony Blair kicked the rest of the hereditaries out back in 1999!

The Lords exists as a block on popular democracy. If the elected Commons has a democratic bone in its body, it must throw out the amendments – and preferably throw out the Lords altogether.

Theresa May’s minority Tory government has pledged to overturn the Lords’ amendments. The Conservatives’ manifesto promise to abandon Leveson II and roll back attempts to force the free press to swallow state-backed regulation was one of the few proposals from any party seriously worth supporting in the 2017 General Election.

Of course, May’s disastrous election campaign left the door open to the anti-press lobby again. But the 13,636,684 voters who backed that manifesto amount to exactly 13,636,684 more than voted for any of the 800 members of the House of Lords.

Jeremy Corbyn’s Labour Party, however, is on the wrong side of this fight for press freedom. Deputy leader Tom Watson pledged that Labour would back the amendments in the House of Commons, set up Leveson II and enforce state-backed press regulation. (Watson has never forgiven the Sun after one of its columnists dubbed him a ‘tub of lard’ and ‘Tommy Two-Dinners’ when he was revealed to be claiming £400 a month in Commons expenses for food alone.)

The opposition has accused newspapers of using arguments about press freedom as a ‘smokescreen’ to protect their self-interest. It is the free-speech-phobics who are still using the victims of historical press-hacking as a smokescreen – human shields behind which they can further advance their crusade to curb the freedom of the press to report what they are up to.

This is another telling sign of how the Remainer left has effectively abandoned the principles of democracy and free speech. Last week one supposedly radical reform group even demanded, without a hint of irony, that the House of Lords must vote down the government’s Brexit bill – in the name of ‘democracy’, of course.

Back in 1820, the government of Lord Castlereagh was seeking to repress the radical press in the aftermath of the Peterloo Massacre. The aristocratic regime extended the stamp tax to publications carrying political opinions – designed to put the press beyond the reach of the impoverished masses – and increased the penalty for publishing ‘seditious libels’ criticising the authorities to 14 years’ banishment to a penal colony. Many radicals refused to submit and went to jail for writing, printing or selling heretical newspapers before they won the fight for a (relatively) free press.

A decade later, in 1831, the House of Lords voted down a reform bill which would extend the franchise, though only to a larger section of property-owning males; the Duke of Wellington condemned the moderate Bill as ‘the commencement of a new era of destruction and plunder’. In response to the Lords’ attempt to block democratic reform, the disenfranchised masses expressed their feelings in the traditional way, by rioting. Several cities were soon in flames, and in Derby the massive castle of the anti-reform Duke of Newcastle was burnt to the ground. Next year the Great Reform Bill was passed, the first big step in the modern struggle for a democratic society.

In 2018, it is surely time to complete the democratic revolution begun more than 200 years ago, and fight for a truly free press in print and online. Perhaps the multibillion-pound refurbishment of the Palace of Westminster could begin by sweeping away that leftover rubbish of the Middle Ages: the House of Lords.