May: the leader the technocrat party deserves

Forget the cough and ‘comedy’ – look at the dire content of the PM’s speech. 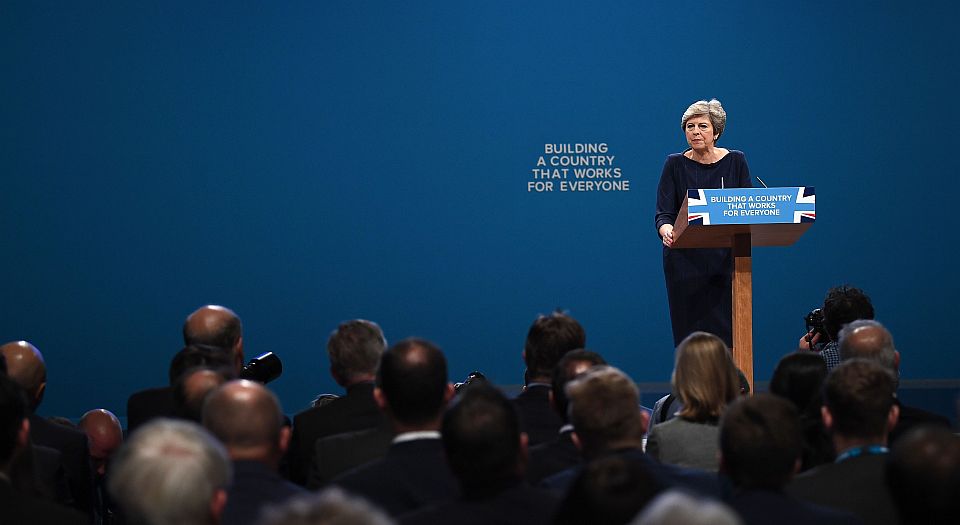 Everybody agrees that UK prime minister Theresa May’s big speech about ‘the British Dream’ turned into ‘a nightmare’. Trying to relaunch her ailing government at the Tory Party conference, May suffered a prolonged coughing fit and was handed a P45 – redundancy notice – in a cunning stunt by a ‘comedian’, before several letters fell off the party slogan behind her.

It was all, concluded the chortling media, a fitting symbol of what the wheezing, prat-fall-prone, collapsing Conservatives have become in the wake of May’s failed election campaign.

But let’s forget about the coughing and the comedy for a minute. The content of May’s speech, the script she was trying to utter between splutters, was far more revealing about the dire state of the Tory Party today.

May’s speech confirmed that the Conservative government is not really made up of freedom lovers or free-market fundamentalists, but Tory technocrats. They are not challenging Jeremy Corbyn’s Labour, but conceding ground to it. The speech showed the Tory leadership not connecting to voters through Mrs May’s ‘compassion’, but isolated from the masses they look down upon as ‘voiceless’ victims. It confirmed that May and Co cannot be trusted to see through Brexit, because they represent everything in the political elite that the Brexit revolt was against.

In short, despite the cracked voice and the lame P45 gag, the speech May tried to give showed that she is the leader the Technocrat Party deserves today.

The prime minister, like chancellor Philip Hammond before her, paid lip service to the importance of free markets as the alternative to Corbynista-style socialism. But that seemed as rhetorical as the Labour conference’s commitment to radical economic change. In substance, what May proposed was a bit more state intervention in the economy: energy price caps, some new council-house building, and so on.

It sounded like a slightly more modest version of what Corbyn and John McDonnell had promised the week before. So where Labour sought to buy youth votes with a pledge to abolish university tuition fees, May put forward the less lucrative inducement of a fee freeze.

As Tim Black asked on spiked at the start of the Conservative conference, if all they can offer is half-baked versions of Labour policies, what is the point of the Tories? Some claim that May is simply making necessary adjustments to the way that Corbyn has shifted the political goalposts, in the same way that Tony Blair had to adapt Labour policy to the changes wrought by Thatcherism. But New Labour was a response to 15 years of Tory government. If May is now prepared to adopt the Opposition’s policies in response to a single election which, let us remember, the Labour Party lost, it exposes what an empty, echoing vessel the Tory Party has become.

May’s speech spelt out the Tories’ remarkable adaptation to the left’s victim politics, where the public are essentially reduced to a collection of ‘vulnerable’ groups in need of protection.

To listen to the prime minister, it seems that Conservative politics is all about standing up for the families of the Hillsborough victims, for the victims of sexual abuse, for the victims of the Grenfell Tower fire, for victims of racial discrimination by the police or the mental-health system. Mrs May repeatedly assured us that ‘sweeping away injustice’ towards such groups is ‘what I’m in this for’ and was why she had joined the Conservative Party 40 years ago.

Some might think this a strange retrospective reason for becoming a Conservative in an era when Margaret Thatcher’s Tory government presided over everything from Hillsborough to inner-city riots. But leave that aside for now. More importantly, May’s version of ‘compassion’ revealed the view which the political elite has of the populace today. They prefer to see the masses as impotent victims who need to be cared for from above by a ‘compassionate’ technocratic state.

Except of course, when push comes to compassionate shove, the people cannot really be trusted to speak for themselves. They need technocratic parent figures to do it for them. Thus May’s answer to every problem she identified was to propose an official inquiry or audit or commission to look into what was needed, giving the decisive ‘voice’ to unelected, unaccountable judges, bureaucrats and academics.

Most starkly, in response to the Grenfell Tower fire, May pledged to appoint ‘an independent advocate for major disasters’ who will apparently provide ‘the strong, independent voice that victims need’. Because people are, of course, too weak and dependent to be allowed to speak in their own voices. So the state must appoint an ‘independent’ advocate to speak for them, like a carer explaining what their ‘vulnerable’ client does and doesn’t like.

The Tory leader’s rather desperate attempt to connect with voters through showing that the left ‘does not have a monopoly on compassion’ only confirmed the distant isolation of the entire political class from the demos – the people – in our supposedly democratic society.

This was what Brexit was about

Nowhere has the gap between the political/cultural elites and the ‘voiceless’ demos been more evident than on the issue of Brexit.

In the June 2016 UK referendum on EU membership, 17.4million voters made clear that they were not voiceless at all when they spoke out loud and clear in favour of leaving the European Union for greater democracy and sovereignty. Ever since, the response of the Remainer elites has been to try to ignore or shout down that democratic roar, by insisting that Leave voters didn’t know what they were saying or didn’t really mean what they said.

This week Theresa May told the Tory conference that she will oversee a Brexit ‘in which the British people are fully in control’. She also pledged her government ‘will prepare for every eventuality’, leaving open the possibility of leaving the EU without agreeing a deal. That will become more pressing as it becomes more obvious that the EU elite sees the Brexit talks as a fixed political exercise in teaching the British people and the rest of Europe a lesson.

But why should we trust May’s Tories to see Brexit through? Not only is the prime minister a Remainer at heart, along with leading government members such as chancellor Hammond and home secretary Amber Rudd. Her speech also confirmed that May today symbolises everything that the Brexit vote was a revolt against – an anti-democratic, technocratic political elite that looks down on voters as a malleable, hapless herd.

And May is far from alone. Much of the focus might be on the more buffoonish antics of Brexit-backing Tory foreign secretary Boris Johnson, as Remainers try to suggest that, if Boris is bonkers, then Brexit must be madness. But look behind the Boris-mania and all the momentum in UK party politics is in the other direction, towards betraying the democratic vote for Brexit and stitching up a deal that represents Remain by another name: from BoJo’s own junior Tory minister declaring that the Leave win was a silly ‘tantrum’ by stupid working-class voters, to former Lib Dem leader Nick Clegg (rightly) telling his illiberal, anti-democratic party that their best chance of stopping Brexit is to join forces with Labour.

One former top Tory adviser said that Mrs May ‘did not deserve’ the mishaps that turned her dream speech into a nightmare. But the content of that speech suggests that she is the leader the political elite deserves today – just as it confirmed she is not the democratic Brexit champion the rest of us need.