Juncker and May could learn from Lenin about open diplomacy. 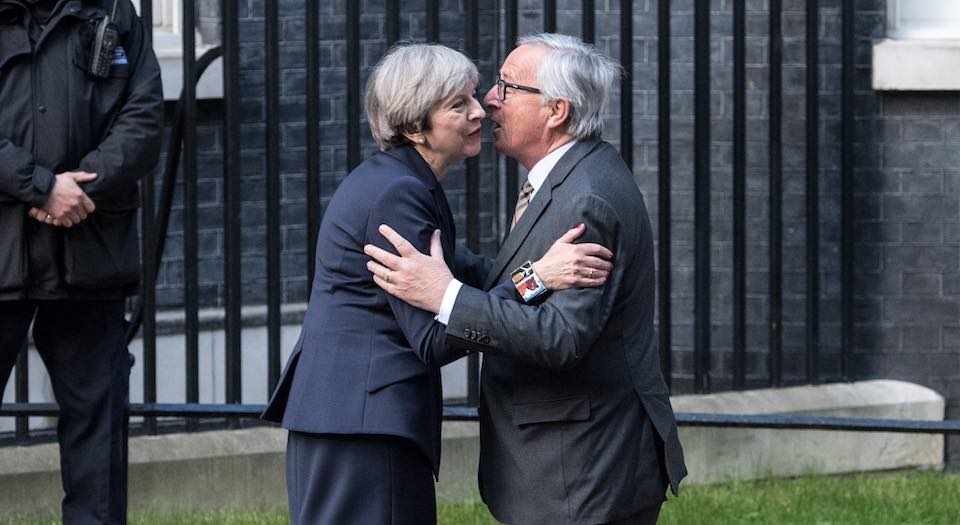 Conservative prime minister Theresa May says the UK government’s negotiating position with the EU has been ‘misrepresented’ by ‘the bureaucrats of Brussels’ and their media allies, who leaked details of private talks in an effort to interfere in the British General Election and undermine Brexit.

May has also insisted she will not respond to ‘Brussels gossip’ by getting dragged into a tit-for-tat battle of the leaks. That sounds fair enough – but not far enough.

What we need are not more leaks of secret UK-EU talks, but less secrecy altogether. Make the entire process of negotiating Brexit open to public and media scrutiny. At the very least there should be full disclosure of all that is said at the top table by EU officials and UK representatives. Better yet, let’s make them join the multi-media age and broadcast the talks on TV or the web.

That way we can see the anti-democratic antics of the EU elites laid bare, and watch how well Mrs May fulfils her promise to be a ‘bloody difficult woman’ in dealing with the Eurocrats. With no danger of ‘misrepresentation’ on either side.

No doubt the prime minister was indulging in some slight understatement when she suggested that recent events prove the Brexit negotiations will be ‘difficult’. The time may even come when the British should walk away. More reason for us all to be able to keep a watchful eye on the fraught disputes over everything from the size of the UK’s Brexit ‘bill’ to the future role of the European courts in British affairs, and keep up the public pressure.

After all, last June a majority of UK voters chose to Leave the EU in order to ‘take back control’. Why should we entrust carrying out that democratic mandate to self-interested political elites controlling events behind closed doors? The future of democracy in the UK and Europe is not their private affair. The best way for the demos to have a chance of being in control of Brexit is to have everything out in the open.

As Brendan O’Neill argued on spiked yesterday (in an article Mrs May might have read before making her speech in Downing Street), the leaks denigrating the British government’s attitude to the EU exit talks are a blatant attempt by European Commission president Jean-Claude Juncker and his allies to undermine UK democracy and Brexit.

Before you can have leaks, there has to be secrecy. And secrecy has always been the native language of EU officialdom. The European Union claims to be ‘an ever-closer union among the peoples of Europe’. In reality it operates as a private union of Europe’s political elites, from which ‘the peoples’ are excluded.

The trinity of main institutions where the EU does its business — the European Council, the European Commission and the powerful-but-little-known Committee of Permanent Representatives (COREPER) — all operate in an atmosphere of secrecy and public silence, where the rooms are as free of the vulgar air of democracy as they are of tobacco smoke. Rather than political issues being debated in public and decided in national parliaments, major questions that affect the domestic politics of EU member states are treated as technical matters to be sorted in committee rooms and filed away in secret diplomatic summits.

When the elected governments of EU member states come together for the showcase summit meetings of the European Council, they become members of an exclusive club to which the European public need not apply; the public’s name is not down at the door, and it’s not getting in. There is no public record of what is said at council summits, just a final communique prepared by COREPER. This document, known as Council Conclusions, binds governments to what has been agreed, regardless of what happens in their domestic politics or national elections between meetings. As Brussels correspondent Bruno Waterfield sums it up: ‘The Council Conclusions are a compact between leaders that overrides the relationship between voters and their governments.’

Over the past 40-odd years, successive British governments have gone along with the anti-democratic practices of secrecy-obsessed European institutions. Even now, the May government (led by Remainers) has effectively insisted that it will treat Brexit negotiations with the EU as its private affair. That is anathema to the spirit of democratic revolt against unaccountable elites that the referendum result embodied.

The alternative to all of this is open diplomacy, the publication of intergovernmental and EU discussions, and democratic scrutiny of top-level affairs. That might sound like a naive fantasy in today’s world. Yet a century ago, the cause of open diplomacy united those fighting for a changed world, from the Bolshevik leaders of the Russian Revolution to the president of the United States.

A short lesson from history about secret dealings and open diplomacy. Before and during the First World War, the Allied Powers of Britain, France and Russia signed secret treaties proposing to carve up the post-war world. After the first Russian revolution of 1917 overthrew the autocratic Tsarist regime in February, the new moderate Provisional Government swore to continue fighting in the war and maintained the secrecy of the treaties. However, when one of these secret treaties was leaked in Russia, it caused outrage by revealing the Allies’ plan to allow Italy to colonise parts of its neighbours – notably Serbia – in return for Italian support for their war effort.

Bolshevik leader Vladimir Lenin, a resolute opponent of the war and imperial secret diplomacy, wrote in May 1917 that he was certain the other secret treaties would turn out to be ‘just as dirty and predatory as the rapacious treaty with Italy’. Lenin warned the Russian people not to believe the government’s lies about fighting the war to defend ‘freedom’: ‘In reality you are defending the shady treaties of the tsar, which are concealed from you as one conceals a secret disease.’

When the Bolsheviks took power after the second revolution, in October 1917, they moved swiftly to withdraw Russia from the war between empires and to publish the Allied powers’ secret treaties. The Bolsheviks’ revelation of the Allies’ plans to redivide the world altered the atmosphere in international relations, and forced Britain and America to justify their war efforts in more idealistic terms. When the US president Woodrow Wilson published his famous Fourteen Points for a new post-war world early in 1918, the very first principle he sought to establish was an end to secret diplomacy:

‘1. Open diplomacy.
Open covenants of peace, openly arrived at, after which there shall be no private international understandings of any kind but diplomacy shall proceed always frankly and in the public view.’

On that basis, Wilson, the mainstream Democratic Party president, felt moved to praise Lenin and the Bolsheviks for upholding democratic accountability through the open diplomacy they had practised in their negotiations to end the war. The president told Congress in January 1918 that, ‘The Russian representatives have insisted, very justly, very wisely, and in the true spirit of modern democracy, that the conferences they have been holding with the Teutonic and Turkish statesmen should be held within open, not closed, doors, and all the world has been audience, as was desired’.

Wilson was certain that the new international order his Fourteen Points imagined, based on the right of nations to self-determination and the demand for democracy, would have to conduct its affairs in public. ‘The only possible programme, as we see it, is this: Open covenants of peace, openly arrived at, after which there shall be no private international understandings of any kind but diplomacy shall proceed always frankly and in the public view.’

That vision of open diplomacy did not last long between the world wars. More recently, since the 1950s, when the process of creating the EU as what the founders called ‘the first supra-national institution’ began, European affairs have become increasingly detached from democratic debate and public scrutiny.

It is a sign of how deeply hostile they are to democracy that Juncker and the EU elites are prepared to break their own code of secrecy to leak against May’s government and interfere in the Brexit election. It should be a sign of our commitment to democracy that we demand open diplomacy.

To be clear: EU officials’ highly selective leaking of what was allegedly said in private talks is the opposite of open diplomacy. It only adds to the atmosphere of mystification and obfuscation, and deliberately incites conspiracy-mongering and whispering campaigns about what is and isn’t ‘really’ going on behind closed doors. Such leaks are in keeping with the EC’s general attitude of concealing the political truth and confusing public perceptions. Open diplomacy is the way to put an end to both secrecy and the leaks it spawns.

Of course governments and officials must be able to prepare their case in private. And no doubt there will always be opportunities for informal discussion. But all negotiations should be on the record and conducted in the media spotlight – not just judiciously leaked to selected media mates.

As Bruno Waterfield wrote in The Times last November, after UK Brexit minister David Davis had tried and failed to conceal some Brussels talks from the press: ‘EU negotiations are no longer the property of a tiny circle of technocrats and civil-service control freaks obsessed with secrecy and keeping the public out of it.’ Instead, ‘everyone is now an expert on the EU; the public have taken ownership by taking the decision to leave. Mr Davis and the Whitehall machine need to take note. If they want to take the public with them on Brexit, this negotiation cannot be a secret diplomatic stitch-up that is business as usual.’

We might think May and Davis would do well to channel the spirit of Lenin and Woodrow Wilson, and refuse to allow the ‘bureaucrats of Brussels’ to keep Brexit talks secret from the electorate ‘as one conceals a secret disease’.