The myth of Momentum

Radical? Momentum is a tired, scared block against radicalism. 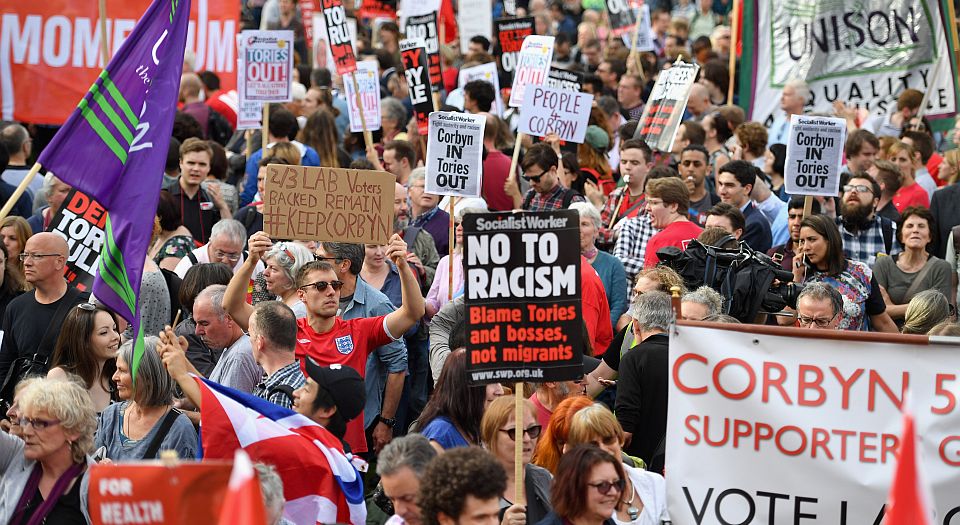 Apparently we’re witnessing yet another ‘battle for the soul of the Labour Party’. News broke this week that the pro-Jeremy Corbyn Momentum group is plotting to team up with Unite and seize control of the party machinery. Jon Lansman – one of the founders of Momentum, set up in the wake of Corbyn’s leadership victory – was caught on tape telling a meeting of activists in Richmond that, should the pro-Corbyn general secretary Len McCluskey be re-elected in the upcoming election, Unite would affiliate with Momentum and coordinate to take over key positions in the Labour Party. For anti-Corbyn plotters in the PLP, it was manna from heaven.

Labour deputy leader Tom Watson seized upon the tape as evidence of the far-left ‘entryism’ that he claims has dogged Corbyn’s leadership. McCluskey denied the claim, accusing Watson of carrying on like he was in ‘a low-budget remake of The Godfather’. Momentum has said Lansman was ‘speaking in an aspirational manner’. But this hasn’t killed the ham drama. Watson and Lansman have been going at it on social media, as one commentator put it, in the mode of ‘battling superheroes’. ‘You’ve revealed your plan. If you succeed you will destroy the Labour Party as an electoral force. So you have to be stopped’, tweeted Watson, reaching for his utility belt.

When it seemed that Corbyn’s team was briefing against Watson, the matter blew up at a PLP meeting this week, at which Watson was greeted by a round of applause. According to the Huffington Post’s Paul Waugh, Corbyn ‘stared stonily into the distance’ as accusations flew that – just like in the 1980s when far-left activists seized control of certain Labour Party branches – Momentum was operating as a ‘party within a party’. One Labour grandee was asked if the party was reliving the Bad Old Days of Militant. ‘No, no – it is much, much worse than that’, he said. The meeting ended in a din of shouting.

Though the spittle-flecked claims of a Communist subversion make for dramatic headlines, they give the so-called entryists too much credit. Peter Kilfoyle, Labour’s old enforcer in the battle against Militant, told the Guardian he sees no comparison between the ‘tightly organised, highly motivated’ Militant and Momentum. Momentum is more like the Labour left’s response to the Blairite pressure group Progress, he says. Indeed, Momentum is staffed by defeat-hardened Bennites like Lansman – who was Tony Benn’s Eighties fixer – and fresh-faced anti-austerity types like Adam Klug and Emma Rees: two primary-school teachers turned activists. The group’s platform, such as it has one, is a check-list of luvvie-lefty soundbites: it’s anti-Trident and pro-nationalisation, for ‘equality and participatory democracy’, and against the ‘scapegoating of migrants’. Hardly ‘all power to the Soviets’.

Almost two years on from Corbyn’s election as Labour leader, what is most striking is how little Corbynmania has achieved. Despite bringing in thousands of new party members and registered supporters – aided by the mad decision to allow people a vote in the leadership election for the price of £3 – Corbyn has failed to get his army of well-wishers to do much more than swoon at his rallies. Though Corbyn’s downbeat, miffed-vicar brand of state socialism – more at home in Pret A Manger than Southend-on-Sea – was never going to win back Labour’s deserting working-class vote, thousands of budding activists are nothing to be sniffed at when there are meetings to hold and doors to knock on. And yet the new members have been notoriously crap at showing up.

Momentum itself is not in rude health. In the Lansman tape he seemed to suggest it was running out of money. In the wake of the EU referendum, Momentum announced a tour of Brexit-voting constituencies to coincide with the invoking of Article 50 this month, but the plan seems to have been quietly shelved after appeals for donations didn’t come to much. It’s easy to see why it is running out of steam. The Momentum-Corbynista worldview is not only broadly off-putting, defined by welfarism and cooing over ‘the left behind’; it is also incredibly insubstantial. It is defined by airy appeals to ‘fairness’, ‘participation’ and ‘a new kind of politics’, rather than any real, transformative vision. The Corbyn phenomenon is more about clicktivism than activism, and more about lefty middle-class moralism than genuinely progressive and popular politics.

This was brought into sharp relief by the Brexit vote. That 17.4million-strong blow for democracy, that moment in which ordinary people defied the political and corporate elites by demanding more control, has left Labour’s so-called radicals reeling in horror. Momentum backed Remain, albeit on the execrable ‘Remain and reform’ ticket. And Momentum’s enthusiasm for Corbyn began to ebb as soon as it became clear that this long-time Eurosceptic wasn’t going to block Article 50. According to a YouGov poll this month, almost 70 per cent of Labour members want a second EU referendum, and only 44 per cent think Jez should contest the next election. For all the talk of a radical people’s politics, the Corbynista left is a counter-revolutionary force, a group angry with ordinary Brexiteers and wedded to oligarchical institutions that huge numbers of traditional Labour voters radically rejected. In Brexit Britain, the real momentum lies far away from Momentum and the rest of the Labour machinery.