100 days since Brexit: it’s time to get real

No more dithering, no more anti-democracy: give us Brexit, now. 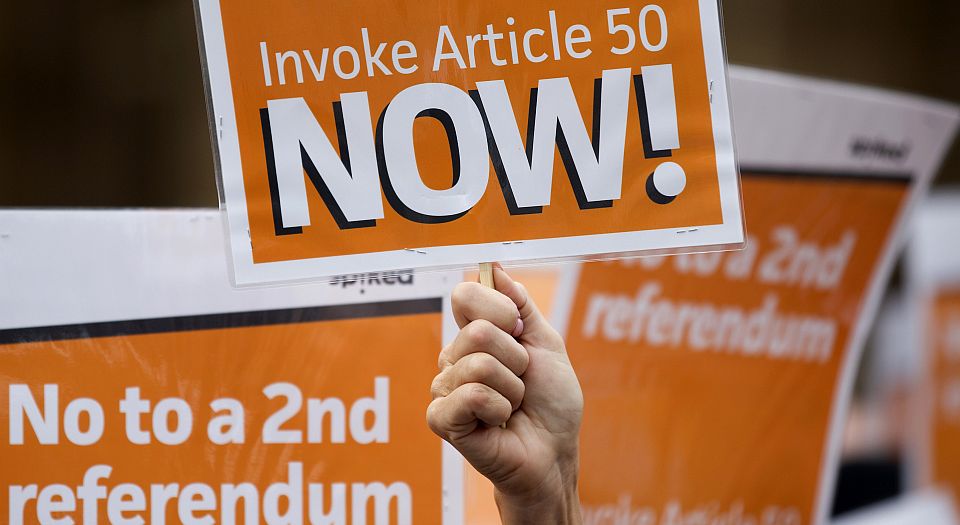 This weekend marks 100 days since the Brexit vote. Take that in for a moment. That’s 100 days since the biggest democratic command in British political history was issued to our elite. And nothing in that time has been done to honour it. Article 50, which triggers Britain’s exit negotiations with the European Union, remains untouched. A democratic uprising, a revolt of the ignored, the smeared and the left-behind, a bloody nose to a complacent elite, has been breezed over, buried in process and put off with lukewarm words. We can’t let the significance of this escape us.

Spurned Remainers in the Tory Party have been making hay this week out of the government’s dithering on Brexit. Sacked education secretary Nicky Morgan criticised the government’s ‘lack of a plan… about the negotiating, the process, what’s going to happen’. Tory grandee Ken Clarke said new PM Theresa May was presiding over a ‘government with no policies’, and has no idea how to tackle Brexit. Meanwhile, a report revealed that the so-called Three Brexiteers – foreign secretary Boris Johnson, international trade secretary Liam Fox, and Brexit secretary David Davis – are still embroiled in ‘political squabbles and turf wars’.

If the government does have a plan, it is to put off Brexit for as long as possible. May refuses to confirm when she’ll invoke Article 50. Some insist it will be early next year. George Osborne, the Cameroon in exile, says we should wait until next autumn, after the French and German elections. The strongest assurance we’ve had is that it will be invoked some time before 2020. And even the most committed Brexiteers – David Davis to the fore – have done nothing but tell us how complicated the process is, and why we must bide our time.

This is dithering dressed up as strategic nous. Formal exit negotiations can’t begin until Article 50 is triggered. And the rest of the world is holding off on trade deals until the terms of departure are agreed. The 100-day debacle is at best a reflection of sheer incompetence – at worst, paralysing fear. May and her cabinet are not conspiring to overthrow Brexit. That would take some balls. No, they’re simply terrified of it. Hence the recourse to can-kicking, the appeals for calm. This is not only cowardly – it’s dangerous. For if putting off Brexit is tactically savvy for anyone, it’s for those who want to thwart it.

When May and Co insist that Brexit is unfathomably difficult, they bolster the position of those like Morgan and Clarke, the Remainers now pushing for Brexit-lite. And then there are the shameless anti-democrats. Whether it’s Lib Dem leader Tim Farron calling for a second referendum, or the shady business interests backing the legal challenge to Brexit, those who want to undermine the vote, who insist that it was the product of fear and ignorance, are emboldened by the elite’s cowardice in the face of Brexit. It validates their position – that it was a stupid decision to begin with – and gives them more time to plot and to scheme.

The brazenness with which the elite has castigated the Leave-voting masses has been stark. Just four days after the vote, the Guardian published an essay titled ‘Why elections are bad for democracy’. At the Labour Party conference last week, shadow health secretary Diane Abbott smeared Leave voters as bigots. The gloves have come off. The nods to ‘reasonable concerns’, the lip service to the people’s views and desires, has been completely jettisoned. It’s a testament to how fragile democracy is that so many in the elite feel so comfortable – cocky, even – in launching broadsides against the masses, and the idea of mass democracy itself.

Since the Brexit vote, we at spiked have heralded this backlash as a return of Victorian elitism. But it now seems that elitism hasn’t come back, as such – rather, it never really went away. What the Brexit vote has brought into sharp relief is that the battle for democracy was never really won. The history of the struggle for the franchise is defined by heroic agitation from below and nose-holding concessions from on high. Through a series of plodding reforms, from the 1830s through to the 1920s, the franchise was begrudgingly expanded in Britain. Even then, the rise of postwar technocracy, the foundations of the European Union, soon emerged to quell public passions and keep in check the newly enfranchised.

In Britain, and across the Western world, the attachment to democracy is sentimental at best, deeply disingenuous at worst. Beneath the warm words about popular politics, the calls for greater public engagement and the campaigns for statues of long-dead Suffragettes, there lies a deep-seated fear of what democracy really means. 100 days after the vote, this is the challenge that confronts us. Not only must we insist that our wishes be respected and our vote acted upon; we must also make democracy real, through agitation, protest, debate and demand. This is just one opportunity, in a long, historic fight. But we must seize it.

Want to join the democratic fightback? Contact the team today.