Trashing the white trash: Hillary and the new bigotry 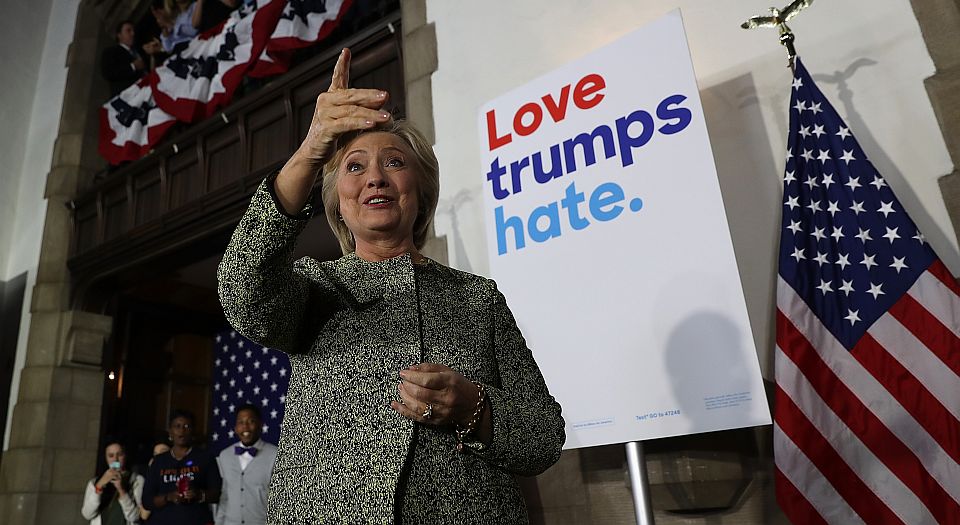 After assuming Hillary Clinton would coast to victory, Democrats are shocked to find that she is in a virtual tie with Donald Trump in the polls. Trump in fact leads in a number of key swing states, like Florida and Ohio. The New York Times roamed New York’s Upper West Side, a liberal bastion, and discovered Democrats freaking out. ‘It’s like someone dropped ice water on the head of America’, said one Clinton supporter. ‘Everyone sobered up. This could happen.’ The reporter found more than one liberal making preparations to emigrate if Trump wins.

There is an insular quality to the Democrats’ current fears, along the lines of ‘how could Clinton be tied with Trump, when I don’t know anyone who supports him?’. For the most part, they’ve blamed Trump’s rise on the media, saying the fourth estate is not calling out his lies. This is ridiculous, since about 99 per cent of pundits are against Trump, and even ‘straight reporting’ news journalists are saying they have a moral duty to oppose the Republican candidate, apparently because he is such a threat to the country.

To the extent that Democrats have looked inward, many will admit that Clinton is not running a great campaign. They acknowledge that her use of a private email server remains a problem. They concede the campaign’s response to Clinton’s collapse at the 9/11 memorial event was a mistake: first deny, then downplay, then send her out on the street to say she ‘feels great’ and hug a child – only to later reveal that she has had pneumonia for days.

But most Democrats aren’t that self-critical. In particular they won’t admit their candidate for president is an elitist with a low opinion of millions of Americans, and that her dismissiveness of working-class people is driving lots of them into the arms of Trump.

Hillary’s recent description of Trump supporters as a ‘basket of deplorables’ is a prime example. In case you missed it, a little over a week ago, Clinton said the following to attendees at a fundraising event: ‘Just to be grossly generalistic, you could put half of Trump’s supporters into what I call the “basket of deplorables”. Right? The racist, sexist, homophobic, xenophobic, Islamophobic – you name it.’ She went on to describe this group as ‘irredeemable’.

In case you’re wondering, Hillary’s basket is a pretty big one: according to current polling, that basket would contain about 44million Americans. In one sweeping statement, she managed to accuse millions of not just being wrong, but hateful. Clinton would later say she regretted citing as many as ‘half’, but otherwise defended her comments.

But what’s really striking is the reaction to Clinton’s remarks, especially from Democrats. When in 2012 Mitt Romney dismissed the ’47 per cent’ who benefitted from government programmes, he was roundly denounced. Speaking to a private fundraising meeting, Romney was revealed as an out-of-touch millionaire who couldn’t care less about nearly half the population. Even his supporters cringed.

Fast-forward to today. Hillary’s supporters laughed at her line, and later wondered why it was newsworthy. The media declared it a minor faux pas at worst, certainly not as devastating to her campaign as Romney’s remarks were to his. Along came liberal pundits to declare that Hillary bravely defied ‘political correctness’ to speak the truth about Trump’s bigots. If anything, she didn’t go far enough. In the Washington Post, Stacey Patton wrote: ‘The only thing Clinton should have apologised for was her lowball estimate.’ Jamelle Bouie had a similar take: ‘We’re going to need a bigger basket.’ This reaction showed that Clinton’s comments were not just an individual politician’s one-off gaffe, but a strongly held view shared by many liberals.

Consider the optics of the event where Clinton made her remarks. It was an ‘LGBT for Hillary’ fundraiser, headlined by Barbra Streisand, with attendees paying up to $50,000 for the pleasure. Here is Clinton – a woman who left the White House in 2001 $500,000 in debt but has managed with her husband to amass a $200million fortune, without starting her own business or working in the private sector – addressing other wealthy types. If this doesn’t scream ‘elite’ – in both economic and cultural terms – nothing does.

These are insiders speaking to one another. The telling word in Hillary’s remarks is ‘Right?’. She is not seeking to convince her audience; she knows they all agree. They are patting themselves on the back for being ‘aware’ and supposedly tolerant. Rich and powerful people making it clear that they are not like the hicks out there in middle America. We’re better than them.

Hillary is also using an insider’s language: see her litany of ‘phobias’. These are terms she and her influential supporters wield all the time as weapons, words that enable them to occupy the moral high ground. From their dominant perch in the culture, they are the ones who get to accuse others of suffering from ‘phobias’. They also get to define what constitutes a ‘phobia’. Want tighter controls on immigration? You’re a xenophobe. Want to see greater security against terrorist attacks? Islamophobe. Disagree with Black Lives Matter? Racist.

What do you call sweeping generalisations about groups of people, and unfairly assigning malign, hateful motives to them, as Hillary does to Trump supporters? Well, you could say that is the definition of bigotry. Clinton and company believe that, as long as it is in the name of fighting racism, sexism, etc, then it is okay to denigrate huge swathes of people. Trashing the white trash is today’s socially acceptable form of elitist bigotry.

What does this mean for the election? For many Americans, this presidential election has become a referendum on the political establishment. In this race, Clinton is seen as the representative of this establishment, the defender of the status quo. She has to overcome not just her personal weaknesses as a candidate – which includes being viewed as untrustworthy by nearly two-thirds of the electorate, just as bad as Trump – but also her tag as the establishment leader. Her ‘deplorables’ comments only consolidate her in that role. And her comments also play right into Trump’s hands. Trump has sought to portray himself as the outsider versus the insider; as the representative of the masses versus the elite. Of course, Trump is neither truly an outsider nor a man of the people, but he is certainly having an easy time being able to position Clinton as elitist.

In dismissing so many as ‘deplorable’, in such an open way (she knew the remarks were being recorded), Hillary shows that the Democrats are willing to write off white working-class votes. Over decades, white workers have left the Democratic Party in droves, switching to the Republicans (or not voting). But in 2008 and 2012, Obama still sought to appeal to this group, even though his strategy was mainly predicated on big turnouts among African-Americans, Latinos and higher-income populations. Now Clinton is not even pretending to care; in her own words, they are ‘irredeemable’. As Bill Scher writes in Politico, Clinton is ‘making clear that… her path to victory doesn’t run through the white working-class vote’. In electoral terms, this is a risky strategy. ‘Clinton’s insult runs the risk of supercharging Trump’s base, paving the way for an upset’, says Scher.

When Clinton and others hurl words like ‘racist’ or ‘bigot’, it is an attempt to shame others into silence. Maybe they won’t change people’s minds – certainly throwing out these accusations is a form of denunciation, not an opening to debate – but they hope to drive opposing views out of the public realm, as people fear the consequences of publicly disagreeing. This seemed to be an effective strategy in the case of sex-same marriage, where opponents were effectively labelled as bigots.

When it comes to Trump, it appears that the Clinton approach is to hope to make people embarrassed to appear to side with him, to fear being branded ‘deplorable’. In that regard, it is interesting to see how many have proudly embraced the ‘deplorable’ label. Go online and you can buy a range of merchandise: ‘T-shirts, key chains, car decals, buttons, pendants, coffee mugs and even a deplorable pocket watch.’ Outside a Trump rally, a supporter holds up a sign saying ‘Deplorable Lives Matter’. This may not be an effective retort to Clinton, nor does it transcend the terms of the debate. But it is encouraging that people are not defensive and are responding in a feisty way.

To be fair to Clinton, she doesn’t consider every Trump supporter to be deplorable. She said the other half are ‘people who feel that the government has let them down, the economy has let them down, nobody cares about them, nobody worries about what happens to their lives and their futures, and they’re just desperate for change’. They are not irredeemable, apparently: ‘Those are people we have to understand and empathise with as well.’ Yet, while sounding more sympathetic, this description is just as limiting as her ‘deplorables’ line – if not a basket of deplorables, then a sack of pitiful, desperate losers.

So, what are Trump’s supporters – deplorable or desperate? Maybe they are simply people who are fed up with Clinton, the Democratic Party and the American political establishment generally, who all, in their own way, treat them as inferiors.